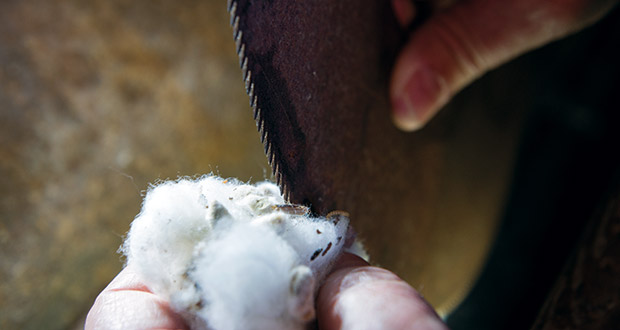 The cotton boll in my hand feels light and delicate, and I easily see how it could translate into the soft, comfy shirt I’m wearing. But, then—ouch!—a sharp burr pricks my hand.

Having snared my curiosity, the Texas Cotton Gin Museum is about to envelop me in cotton lore: how the white puff in my hand speaks of a painful history of slavery; how the cotton gin revolutionized cotton farming without significantly enriching its inventor; how cotton remained an important crop for Cotton Belt farmers after the Civil War; and how a really tiny insect threatens the shirt on my back.

Located in Burton, about 10 miles west of Brenham, the museum and its historic gin explore the history of what remains the state’s largest cash crop (even though China and India now produce most of the world’s cotton). Burton-area farmers opened the cooperative gin in 1914 to serve the booming cotton industry. It operated for 60 years—first on steam, then oil, then electricity—before closing in 1974. By then, facing the advent of polyester, labor shortages, and government production controls, many small cotton farmers had turned to cattle and dairy.

But in 1992, the old gin again revved its 125-horsepower Bessemer Type IV oil engine and began ginning cotton once a year for the annual Cotton Gin Festival, held the third Friday and Saturday in April (April 15-16 this year). The rest of the time, it welcomes tourists for a look at how cotton lint—the white fluff that becomes thread—gets separated from seeds, stems, hulls, and other extraneous matter.

“Our main goal is to keep the legacy of cotton alive for visitors and future generations,” says Linda Russell, the museum’s director. “It’s not just about Burton. It’s all the little cotton towns in the Cotton Belt through the ages.”

Before my companions and I go out to see the gin, we learn about cotton in the small, one-room museum lined with display cases of cotton and cottonseed products, from thread to coffee filters, Crisco, and cattle feed cubes. We gather around a table in the middle of the room, where Russell passes around cotton bolls for us to feel the soft lint and the hardened, sharp-tipped burr.

She tells us about the old process of handpicking cotton, which was, in a word, painful. Not only did the pickers suffer pricks that made their hands bleed, they also had to drag along heavy sacks. A 12-foot-long sack would hold up to 100 pounds of cotton, Russell says, and men typically filled those sacks several times a day. A good picker could pick 300 to 350 pounds of seed cotton a day.

Plantation owners originally relied on slave labor to separate the hulls and seeds by hand, producing about a pound of cotton and two pounds of seeds in 10 hours. But in 1793, Eli Whitney invented an engine—called “gin” for short—that cleaned as much cotton in one day as 50 people could by hand. The museum has a small hand-cranked model of Whitney’s gin—not much bigger than a breadbox—and we watch as its wire hooks and brushes pull the loose cotton fibers away from the hull and seeds. Cotton gins eventually moved from steam to oil to electricity, and today’s technology can yield 100 bales an hour, Russell says.

Shortly after Whitney and partner Phineas Miller patented his machine, one Henry Ogden Holmes patented a similar machine, and the resulting court battle tied up production of the gin. Farmers, Russell says, wound up building their own gins. Thus, Whitney’s profits didn’t soar. What did soar was the demand for slave labor to pick cotton. After slavery was abolished, many slaves stayed on as sharecroppers and kept picking cotton until 1940 and the introduction of industrial cotton-picking machines.

Texas cotton farming encountered a formidable enemy in the 1890s when the boll weevil moved into the state from Mexico, destroying crops from the Rio Grande Valley to the Sabine and Red rivers. Its legend looms large, but the beetle itself typically measures around one-sixteenth to one-eighth of an inch. Russell passes around a plastic-encased boll weevil, scarcely bigger than a fruit fly, with a long snout. Adult weevils lay eggs on the cotton plants, and the larvae devour the developing bolls. To keep infestations down, cotton farmers destroy all cotton plants between growing seasons, and mandatory traps track weevil infestations.

Russell serves up more surprises: Although most cotton we see today is white, it also comes in brown, green, red, and blue. American paper currency is mostly cotton: 75 percent cotton, 25 percent linen. That’s why we find our bucks whole at the end of the laundry cycle.

What happens to all the cottonseed left over from the ginning? Russell explains that cows like to eat it, and their multiple stomachs can digest it. Cottonseed is also used to make household products such as cooking oils, mayonnaise, toothpaste, and soap.

After a short film about the history of ginning cotton, Jerry Moore, the museum curator, takes us outside behind the museum to see the massive gin building, made of cypress wood and tin.

During the festival, volunteers will gin cotton, but today we look at the machinery as Moore explains the process. We see a carport-like structure at the edge of the building, where a pneumatic tube would suck a wagonload of cotton into the ginning machine. Inside the structure, an oil-driven combustion engine—purchased by the gin in 1925—runs the gin. We climb stairs to see the machines that remove the seeds and hulls from the cotton lint, which then is blown into a press that mashes the cotton 15 feet down to the first floor and forms it into a bale. Bound with metal straps and tagged with a label identifying its bale number and ginning location, an average bale weighs about 500 pounds.

The entire process, we’re told, takes about 12 minutes. Then, the bale slides down a chute and back onto the wagon to be taken to market, eventually to wind up on beds, in baths, and well beyond.