Hats Off to Ben’s

The Texas Hat Museum at Ben's Western Wear in Cotulla 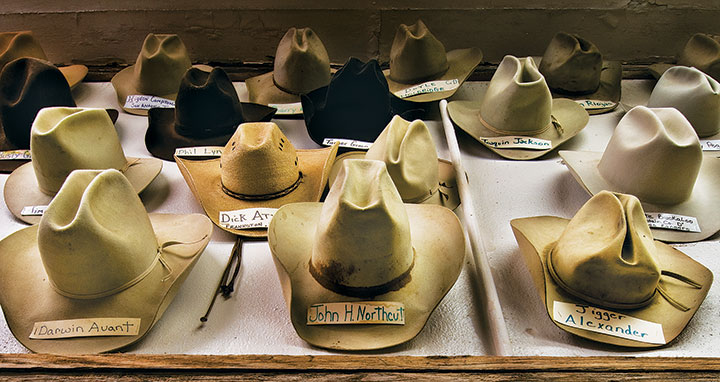 In Cotulla, a formerly sleepy town roughly equidistant between San Antonio, Laredo, and Corpus Christi, the Texas Hat Museum represents a dignified calm amid the storm that is roiling South Texas—the oil-and-gas boom of the Eagle Ford Shale.

The museum occupies the boot room of Ben’s Western Wear, which has served this brush country since 1946; dozens of sweat-stained Stetsons, Resistols, and other cowboy crowns pay tribute to the local ranchers and vaqueros who wore them. Governor Dolph Briscoe left his hat here, as have Nolan Ryan, Rick Perry, George Strait, salt-of-the-earth cowboys, Texas Rangers, and gentleman ranchers. Every hard-earned crease, curve, and water spot embodies a way of life that inevitably will be altered by one of the biggest oil booms in Texas history.

Advancements in drilling technologies have made it possible to extract vast quantities of oil and gas from the shale here, attracting a parade of international oil companies and eighteen-wheelers. Cotulla’s population has tripled since the boom began in 2008; 18 new hotels have been built; and sales tax receipts have soared from nearly $400,000 in 2007 to more than $3 million in 2013.

And there amid the furor, in the historic section of Cotulla, sits Ben’s, a former saloon-turned-Western-wear store that has been dressing hunters and ranchers for seven decades. Stewart Martin, an affable man who enjoyed getting to know his customers even more than he loved selling them gear, bought the shop in the 1980s after his uncle Ben Ludeman, the original owner, passed away.

For Martin, who passed away in 2006, Ben’s was about more than the merchandise—it was a creative project and paean to the South Texas lifestyle he loved. He stocked books by J. Frank Dobie and winsome cowboy titles like “Don’t Squat with your Spurs On.” He produced homemade store catalogs with photos of real local cowboys modeling his wares. And then one day in the early 1990s, a customer handed Martin his old hat, ready to part with it, and the Texas Hat Museum was born.

“Stewart took that old hat and hung it up on the wall,” says his widow, Jill Martin, who was her husband’s partner in the store. “Then the next guy came along, hung up his hat. People were asking, ‘whose hats are these?’ And Stewart started putting names on them. I have hundreds of hats now; I’ve even got 300 in the back that I don’t have space to hang up. I am trying to find a way.”

Before he died, Martin began writing about the hats, gathering up the life stories of their owners; he planned to post a new one each month on the store’s website. He wrote about Texans like Jules Hillje, a German immigrant who planted oak trees throughout the state: “If you ever pass through some of Texas’ great little towns and you see an oak tree big and beautiful—just remember it could very well be one of Jules’.” And about Texas Ranger Jack Van Cleve: “When Mr. Jack shook your hand, it made you feel important and proud to be in the presence of such a fine gentleman and respected Texas Ranger.”

For the late Stewart Martin, Ben’s was about more than the merchandise-it was a creative project and paean to the South Texas lifestyle he loved. When a customer handed him his old hat in the early 1990s, the Texas Hat Museum was born.

When Martin passed away, the hats remained on the wall, and people keep bringing more. “These hats are part of the legacy of this part of the world,” says Jill. “The hat tells what a man did. They sweated in them, worked in them, lived in them. At one time, everyone wore hats; they are part of history.”

Before the oil boom hit, Ben’s survived primarily on business during hunting season, and Jill thought seriously about closing. “The oil boom was a turning point; it reenergized the store,” she says. “Now my customer base has completely changed. Instead of hunters, I have oil and gas workers. The ranchers aren’t leasing their land out to hunters as much now that there is so much drilling. Hunting and drilling don’t really mix. So I’ve changed my merchandise: We used to have one style of steel-toe boots, now we have 15 … and a lot of fire-retardant clothing.”

Ben’s has been so busy that Martin keeps the store open until 7 p.m. on weekdays to accommodate the oil-field workers who work late; in return, she now closes on Saturdays so that she can enjoy a break. But before too long, she says, she’d like to pass the baton to someone with fresh energy.

If Jill has her way, the Texas Hat Museum will stay put. “I was thinking I’d write it into the sale that the hats are still the property of their original owners,” she says. “These hats are family heirlooms—I’d want them to always be respected and cared for.”