The sights, sounds, and stories of an island rich with ghostly potential 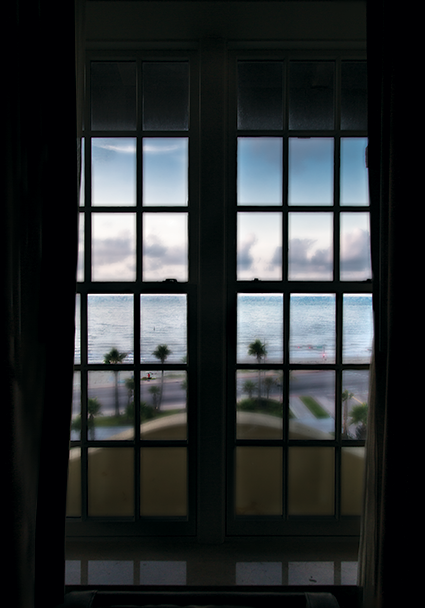 (Photos by Will Van Overbeek)

The woman behind the registration desk at the Hotel Galvez glanced at the number as she handed me my keycard. “Oh, you’re staying in our special room,” she said, eyebrows raised. “Did you know that?”

Indeed I did. It seems  just about anyone in  Galveston can tell you that  a ghost haunts Room 501.

In the mid-1950s, the story goes, a bride-to-be named Audra stayed in 501, which faces the water, while awaiting the return of her sailor. Tragically, his ship sank in a terrible storm, and Audra was told no one survived. She waited for days, but when her fiancé didn’t return, she climbed to one of the hotel’s rooftop turrets and, heartbroken, hung herself. Even more tragically, a few days later, the sailor returned alive and well.

It should come as no surprise that a seaport city with a colorful past of pirates, sailors, smugglers, and vagabonds, as well as a harrowing history of deadly battles and storms, sports more than a few ghost stories. Galveston’s list runs long. And if you aren’t into ghosts, the city’s rich and sometimes unbelievable history alone makes the island a tantalizing October destination. 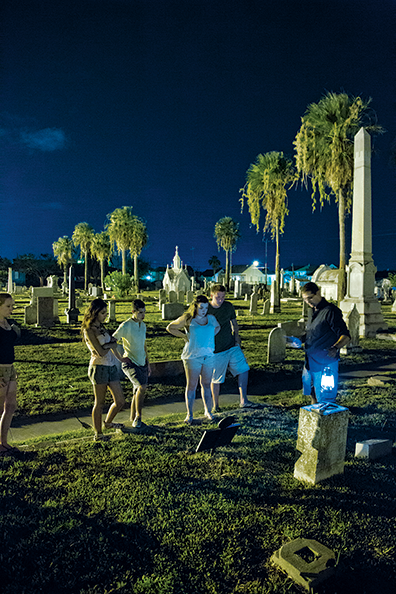 I started my exploration of the city’s haunted highlights with Dash Beardsley’s Original Ghost Tour of the Strand, a tour of sites and stories on historic Strand Street, still partially paved with bricks and lined with buildings from the 1800s. A tourist attraction in his own right with a flowing black coat and theatrical manner, Beardsley mixes historical facts with spooky first- and second-hand tales—Confederate soldiers seen standing on the street, faces appearing on walls, and the tragic events of the 1900 hurricane.

The “Great Storm” of September 8,  1900, killed at least 6,000 Galveston  residents (making it the deadliest storm in U.S. history) and left great swaths of destruction across the island.  Overwhelmed by so many bodies, city leaders first buried them at sea. When the dead washed back onto shore,  the bodies were burned along with  the debris. Earlier in the city’s history,  during the Civil War, Confederate forces captured the city in the Battle  of Galveston, fought on January 1, 1863, on the very streets that I toured with Beardsley. Wounded soldiers were treated in buildings that still  line the Strand.

In short, Galveston has no shortage of the unfinished business of which ghosts are made. Beardsley’s Original Ghost Tour circles about five blocks  of the Strand Historic District, with a quick detour to the 1879 Tremont Hotel—one block over on Ship’s Mechanic Row—which, legend says, is haunted by an unlucky gambler.

The Menard House, my next stop, bears the title of Galveston’s oldest  existing home and may have the most spirits occupying it as well. Michel B. Menard, one of Galveston’s founders and a signer of the Texas Declaration of Independence, built the house in 1838 and occupied it until his death in an upstairs bedroom in 1856. Menard outlived three wives, one of whom also died in the home, as did some of the Confederate soldiers brought here when the building served as a yellow- fever hospital during the Civil War. Police Chief Edwin Ketchum bought the house in 1879 and owned it dur- ing the Great Storm. The imposing structure provided shelter for some, while unlucky drowning victims  littered the lawn. 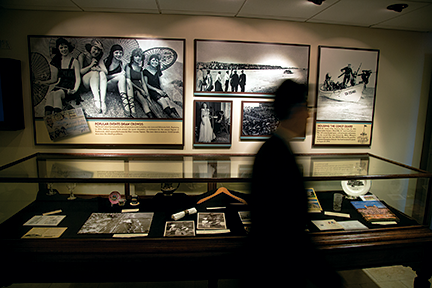 A history display at Hotel Galvez.

Clearly, the Menard House is rich with ghostly possibilities, and the Galveston Historical Foundation, which manages the house, hosts Haunted History Ghost Hunts in October. Jami Durham, the foundation’s manager of historic properties research and special programs, encourages participants to come prepared with paranormal detection apps on their smart phones and to team up for best results. The truly intrepid can book overnight stays in the house.

No Galveston ghost search would  be complete without a spin through the Broadway cemeteries, a collection  of seven burial grounds containing victims of the Civil War and yellow- fever epidemics, and others. Joseph Pellerin, a college history teacher and third-generation Galvestonian, conducts after-dark walking tours through the old and odd collection of obelisks, mausoleums, and tombstones, some of them broken, faded,  or leaning. He points out the graves  of prominent Galvestonians including  Michel Menard; Thomas Jefferson Chambers, one of Texas’ original land speculators, an erstwhile politician, and a Confederate soldier who was murdered in 1865; and George Childress, an author of the Texas Declaration of Independence who died by his own hand. After the Great Storm, when die-hard residents built the  Seawall and raised the island’s grade, unclaimed graves in the cemetery were simply covered over. That  means that in some places, Pellerin explains, one body may lie several  feet above another.

Pellerin also offers a driving tour of historic homes, including Ashton Villa, the only remaining antebellum mansion on Broadway and purportedly the most haunted house in Texas. James Moreau Brown built the house in 1859, and many of its ghostly tales involve his eccentric daughter, Rebecca, known as Miss Bettie, an artist whose paintings still adorn the stately home. After telling stories of the homes and their residents, Pellerin swings through the Broadway cemeteries to tour their graves. Pellerin encourages taking photos on his tours, as he says, “You never know what you might capture.” The Galveston Historical Foundation, which manages Ashton Villa, opens the home for public tours periodically, but not this Halloween season. The home can also be rented by those who want to have their own private ghost hunt.

After a dark cemetery and a wary night at the Hotel Galvez waiting  in vain for Audra to show up, I was ready for something on the lighter side. Haunted Mayfield Manor offers old-school haunted-house fun, play- ing off the story of Dr. Mayfield, a  physician forced to work as an un- dertaker after the Great Storm. The path through the haunted house  navigates dark corridors populated  by live actors, characters popping  out of paintings, and banging doors and drawers. Take my advice and don’t bring up the rear.

Next door to Mayfield Manor, the  interactive museum Pirates! Legends of the Gulf Coast tells the story of  Jean Lafitte, a French privateer. In  exchange for a pardon for his misdeeds, Lafitte fought with Major General Andrew Jackson in the Battle  of New Orleans, a critical American victory in the War of 1812. Lafitte then came to Galveston to raid Spanish ships for the Texas revolutionaries, or to spy for the Spaniards, depending on who tells the story. Either way, the dashing pirate wore out his welcome, and the U.S. Navy ran him off of the  island in 1821. A pirate actor guides visitors across a ship’s deck, a dockside bar, and the captain’s quarters, supplementing information provided on plaques and displays. I walked out feeling as if I knew old Jean pretty well.

The woman behind the registration desk at the Hotel Galvez glanced at the number as she handed me my keycard. “Oh, you’re staying in our special room,” she said, eyebrows raised. “Did you know that?” Indeed I did. It seems just about anyone in Galveston can tell you that a ghost haunts Room 501.

A couple of blocks away, the Pier 21 Theater shows movies that fill out the story of Galveston, including The Pirate Island of Jean Lafitte, for those with interest piqued by the museum, and The Great Storm. I opted for the latter, given the prominence of the 1900 hurricane in Galveston’s history and ghost legends. Using photographs and words written by those who survived the storm, the documentary conveys the incredible loss of life and devastation. There was certainly plenty of unfinished business going on following the powerful hurricane.

Back at the Hotel Galvez—a destination that has been featured by Discovery Channel’s Ghost Lab and Travel Channel’s Ghost Stories—I took a ghost tour with concierge Matt Benavides. It turns out that Audra has plenty of company in the 1911 hotel. Children seen and heard playing in various parts of the hotel through the years may have been residents of a Galveston orphanage devastated by the Great Storm. More than once, the front-desk switchboard has fielded phone calls from rooms with no registered guests, and in one case, not even a phone. A toilet in the women’s restroom near the Music Hall ballroom purportedly flushes on its own. Shadowy figures appear in historic photos on the walls. By the end of the tour, I felt tingles up and down my spine, even though I hadn’t seen or heard a thing out of the ordinary.

I had high hopes for my last night in Room 501. But a rustling noise at 3 a.m. turned out to be the staff sliding my bill under the door, the tapping at the window only raindrops, and a faint orb in the center of the room just a smudge on my glasses. When I wheeled my suitcase out and the door swung closed behind me, though, did I hear a faint but distinct voice say “goodbye?”