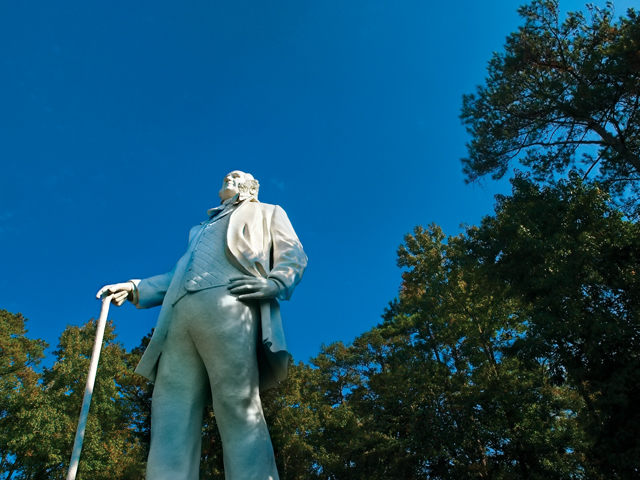 Large legacy. Big Sam. Sculptor David Adickes’ collosal statue of Sam Houston greets travelers to Hunstville from miles away on Interstate 45. An attractive, helpful visitor center is at its base. (Photo by Skeeter Hagler)

Historic Capitol Hill, one of the highest points in Huntsville, is a good place to start if you want to really understand this cultured and prosperous Piney Woods town that has long set its sights on greatness. Energized by the spirit of Lone Star general and statesman Sam Houston, the hometown hero of Texas Independence, town fathers once imagined a capitol dome atop this prominent rise. Today, Capitol Hill is serenaded by the clock tower chimes of Sam Houston State University, one of the state’s oldest institutions of higher education.

True to its earliest ambitions, the surrounding Huntsville community thrives both as a center of Texas tradition and history, and as headquarters for the nation’s second-largest prison system.

I’d been to Huntsville many times as a newspaper reporter covering the prison system before I actually got to know the place. Like many true Texans, I didn’t realize that Huntsville owes much of its prominence, as well as its place on any Texan’s travel itinerary, to the influence and legacy of Sam Houston. The mythic soldier, politician, and adventurer made his home here and forever linked the town to pivotal events in Texas independence and statehood. Houston’s larger-than-life, ripe-for-a-Hollywood-movie persona casts long shadows—from the prison system and university he helped establish to the 67-foot “Big Sam” statue that now overlooks the Interstate 45 freeway into town. Even before Huntsville became synonymous with the prison farms that dot the surrounding countryside, this community was a vibrant, ambitious center for education and government. It shows in gracefully restored homes and buildings, the bustling college campus, and Huntsville’s many other cultural and historic attractions—all of which I discovered when I had the opportunity to slow down and really explore Huntsville for the first time.

My Huntsville re-discovery tour started at the giant concrete-and-steel statue of Sam Houston that artist David Adickes presented to the city in 1994. Visible from northbound I-45 for nearly seven miles, A Tribute to Courage has a well-stocked visitor’s center at its base, where I picked up brochures and useful driving maps, and chatted with knowledgeable volunteers.

Armed with directions, I headed straight for the Sam Houston Memorial Museum (just south of Huntsville’s town square, on the Sam Houston State University campus), home to the largest collection of Houston artifacts anywhere. The only man to serve as governor of two states—Tennessee and Texas—Sam Houston became the first elected president of the Texas Republic in 1836, and held office as both senator and governor after Texas joined the Union. The museum compound is set on 18 park-like acres that once formed part of the statesman’s homestead, and includes Houston’s beloved Woodland Home, where he lived with his wife, Margaret Lea Houston, and most of his eight children. Also set here is Steamboat House (moved from its original location just northeast of town), the rented house where the out-of-favor ex-governor finished his days quietly, after refusing to support the Confederacy.

During the General Sam Houston Folk Festival, held each year on the first weekend in May, the compound comes alive with history exhibits, craft displays, and military reenactments-not to mention music and food. Shouts of “Fire in the hole!” and cannon explosions greeted me as costume-clad volunteers told the story of General Houston’s victory at San Jacinto to rapt student groups.

Don’t miss the 20-minute introductory film at the museum’s education center, where you’ll learn how Houston received his Cherokee name, Colonneh (the Raven), and how he led the fight for Texas independence. Artifacts at the main museum like Houston’s jaguar-skin vest and the tiny gavels, hearts, and hatchets he loved to whittle and give away, fed my newfound facination.

From museum volunteers, I learned that Houston never publicly explained the brief marriage and scandalous breakup that drove him from the Tennessee statehouse—and to his Texas destiny. (Even his former wife left instructions to burn her diaries upon her death, I was told.) And when I asked whether the hero of San Jacinto was wounded in his left leg—as the museum diorama shows—or in his right leg—as depicted in the famous painting of his confrontation with Mexican General Antonio Lopez de Santa Anna that hangs in the Texas Capitol—museum volunteers were ready with an answer: left. They showed me copies of Sam Houston’s own letters, in which he describes the injury and his recovery from it.

Other stops for those interested in Houston’s life and times include tranquil Oakwood Cemetery, where an impressive marble monument of the hero on horseback replaced a simple gravestone in 1911. Both Joshua Houston, the general’s trusted former slave, and Joshua’s son, educator Samuel Walker Houston—an important figure in Huntsville’s history—also are buried at Oakwood.

Or, take a short trek across the street from the museum and up several dozen steps to Capitol Hill, topped by the 1852 Austin College Building, site of the state’s first law school and now an icon of the Sam Houston State University campus. After Austin won the 1850 referendum as state capital, Huntsville turned its ambitions to becoming “the Athens of Texas.” Then Senator Houston himself attended the cornerstone ceremony for what is described as “the oldest educational building in continuous use west of the Mississippi River.”

And Huntsville’s ambitions didn’t stop there. Houston’s spirit—not to mention his power and influence—were surely at work in the city’s 1848 campaign for what was then another mark of civilized society: the state’s first prison. Today, there are seven prison units in and around Huntsville—including the red-brick unit nicknamed “The Walls,” which rises only a few blocks from the downtown square.

Want to know more? At the Texas Prison Museum, where fascinating details come with the price of a ticket, you can see Old Sparky, the electric chair once used in Texas executions, and have your picture taken inside a replica cell. Displays of inmate art made from matchsticks and toilet paper, as well as more sinister inmate craft-weapons fashioned from sharpened spoons and bits of plastic-speak powerfully oflife behind bars. Prison museum docents also can point you to melancholy “Peckerwood Hill,” actually the Captain Joe Byrd Memorial Cemetery, where the unclaimed bodies of inmates who die in custody are buried under simple headstones.

Huntsville’s town square was another charming surprise on my reunion tour, with a half-dozen or so antiques shops and several restored historic buildings to visit and admire. Home of the Walker County Courthouse, the square also boasts the Gibbs Center for the Performing Arts in the Old Town Theater, and hosts several major festivals and events during the year. The annual Airing of the Quilts takes over the square on the first Saturday in May, and conveniently coincides with the Sam Houston museum’s annual festival. Hundreds of handmade coverlets flutter on outdoor display-—and some are for sale-in a free exhibition sponsored by the Tall Pines Quilt Guild. The square also hosts Fair on the Square the first Saturday in October, with arts-and-crafts vendors, music, and food. And even when there’s nothing special going on, you can sip a strawberry-lemonade from the old-fashioned soda shop here, hunt for collectibles, and look for the trompe-l’oeil painting techniques by New York muralist Richard Haas that add new architectural charm to several downtown buildings. The courthouse itself dates to 1970, but the square includes the 1890 Gibbs Brothers Building, which has been the site of a store, bank, or other Gibbs family enterprise for nearly 170 years. (Gibbs’ business first opened in 1841 on this site, and was replaced by the present brick structure in 1890.)

Historic Huntsville—founded in 1835 as a frontier trading post—is more than its town square, of course, and a driving tour turned out to be an indispensable introduction to the city’s architectural attractions. My meanderings not only took me past restored mansions from the 1800s—like the graceful Wynne Home Arts Center, with its white columns and blue porch ceiling—but also to an intriguing collection of historic fixer-uppers awaiting repair along University Avenue. And while I was house hunting, the mix of gaily painted bungalows and tidy Victorians along Avenue 0 and “Knowledge Hill,” where local college professors once dominated, showed me an equally appealing side to Huntsville.

I ended my architectural tour at The Whistler Bed and Breakfast Inn, an 1859 triple-columned beauty also known as the Eastham-Thomason Home. What a delight to turn up the curving path to this stately residence, formally landscaped and softly lit at night! Innkeeper Mary Mabel Thomason Clegg grew up here, only a few blocks northwest of the town square, and named the inn for a grandfather who loved to whistle. She keeps it decorated with vintage toys, photos, and family antiques, including a lovingly preserved rosewood table where I dined on a baked puff-pancake, fresh fruit, and bacon on my last morning in Huntsville. Clegg says the table was crafted from a piano that survived the Civil War, thanks to her greataunt Mary from Mississippi. As the family story goes, Mary was only six when she confronted rampaging Union troops and fell to her knees, begging them to spare her beloved piano from destruction.

Sitting in the Whistler’s elegant dining room and hearing stories passed down from some of Huntsville’s earliest families helped complete a more vivid picture of the town during my trip of discovery. With her own rich history all around her, Clegg turned out to be an eloquent spokeswoman for this Piney Woods center of education, culture, and consequence. Growing up here, raised on the stories of Sam Houston and his ambitions for Huntsville, Clegg was taught that her hometown had always aimed higher than some raw and rambunctious Texas towns. As she put it—and I have to agree—Huntsville was, and still is, “something special.”

Huntsville, the Walker County seat, lies about 70 miles north of Houston (and 170 miles south of Dallas) on I-45. The Huntsville/Walker County Chamber of Commerce Visitor’s Center (1327 11th St.; 936/295-8113 or 800/289-0389; www.huntsvilletexas.com) has information about events, attractions, lodging, and good places to eat. Following is contact information for sites in the story and a few of the author’s other favorites.