The Grand Masonic Lodge in Waco 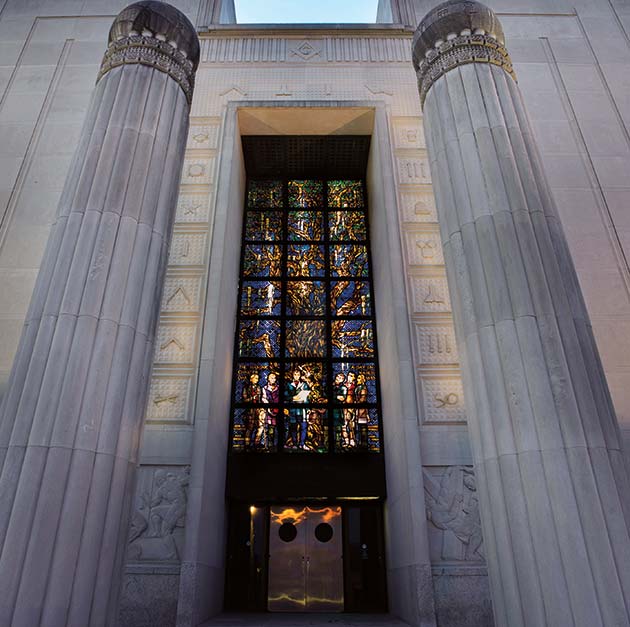 As I watched Neil Armstrong and Buzz Aldrin plant the American flag on the moon in the summer of 1969, I had no idea that Aldrin was also laying ceremonial claim to the mysterious orb on behalf of an enigmatic group of my fellow Texans.

I learned about that part of the Apollo 11 mission on a recent visit to the Memorial Masonic Grand Lodge Temple in Waco, state headquarters for the fraternal order and home of a museum and library documenting Masonic history in Texas. The Masons trace their Lone Star roots to 1835 and boast such influential members as all four Republic of Texas presidents and 31 Texas governors. The museum’s artifacts reflect that broad—and sometimes quirky—span of Texana, including the deputation letter that Aldrin, a Texas Mason, carried to the moon and back, placing the celestial body under the jurisdiction of the Grand Lodge of Texas and establishing a Masonic lunar outpost called Tranquility Lodge No. 2000.

While Freemasonry, the oldest and largest fraternal organization in the world, is widely known for its shrouded rituals, I learned that the group is not nearly as inscrutable as many believe. “The purpose of Freemasonry is to take good men and make them better,” explains librarian Bruce Mercer. “Masonic principles teach the value of relief—or charity—and through charitable outreaches like the Shriners Hospital for Children in Galveston and the Texas Scottish Rite Hospital in Dallas, the 79,000 Masons of Texas make their presence known throughout the state.”

As noted on the Grand Lodge website, the Masons keep their rituals secret because “an element of secrecy serves to heighten interest in Masonic teaching” and “because most people would not benefit from being introduced to Masonic teachings out of the context of the Masonic degree system.”

Located a few blocks south of the McLennan County Courthouse, the Grand Lodge’s majestic limestone edifice features sculptural friezes that depict the quarrying of stone, felling of timbers, and other labor that went into the construction of King Solomon’s Temple as described in the Bible. A celestial globe crowns a pillar on one side of the grand entrance, and a terrestrial globe crowns a pillar on the other. “In the early days of Freemasonry,” explains staff member James Herold, “its myths and legends placed the origins of our order at the building of King Solomon’s Temple. Although it grew from the medieval guilds, much of our symbolism is based on the building of King Solomon’s Temple.”

Though most of the building is not air-conditioned, it wasn’t sweltering when I visited this past June. Barbara Mechell, librarian and curator, started our tour in the Memorial Room on the first floor, which honors Texas Masons who served in war. A stained-glass window in the room is full of Masonic symbols, such as the “all seeing eye,” a square, compass, level, and trowel. An American flag on display flew over Hickam Field at Pearl Harbor when the Japanese attacked on December 7, 1941.

The expansive lobby showcases dioramas of Texas Masonic history and life-size statues of Republic of Texas presidents Sam Houston and Anson Jones. Jones was the first grandmaster of the Texas Grand Lodge and carried the charter for the first lodge in Texas in his saddlebags during the Battle of San Jacinto.

Also on the first floor, the Republic of Texas Exhibit showcases Masonic history from the period when Texas was an independent nation. Many Texian rebels at the Alamo and the Battle of San Jacinto were Masons. Artifacts in the room include a Mexican sword from the Alamo, a Masonic jewel found some 11 feet underground during a 1982 excavation at the Alamo, and a lock of Sam Houston’s hair donated by his great-grandson. Gavels—important items at every Masonic gathering—on display were carved from fallen limbs of the “Masonic Charter Oak,” a Brazoria oak tree that shaded an early assembly in 1835. A Grand Lodge of the Republic of Texas apron in the room is perhaps the state’s earliest example of the decorated Masonic apron, one of the order’s most important items of attire. This particular apron features the Masonic all-seeing eye, a five-pointed star, and the letters G.L.R.T.

In the expansive basement, a corridor lined with photographs of Masonic Lodge buildings throughout the state leads to two large rooms filled with fascinating exhibits. In addition to the memorabilia of Masonic history—gavels, aprons, medals, jewels, and artwork of a historical, religious, and pastoral nature—the gallery exhibits focus on military history, the railroad, Texas history, and the Holocaust. “It’s not as widely known that the Nazis targeted multiple nationalities, religions, and organizations, including Masons, who did not conform to Nazi ideology,” explains Mechell.

Indeed, members of Freemasonry have played witness to epic historical events across the world over hundreds of years, but it remains to be seen how the group will fare in the 21st Century. Typical of most fraternal organizations, Masonic membership is declining in Texas and nationwide—down 68 percent nationally since 1966, according to the Masonic Service Association—as older members die off at a faster pace than new members enroll.

Spend an hour or so perusing Texas Masonic history with friendly guides, and I guarantee that your visit will be enlightening—whether you’re a member of the group or merely interested in taking a peek at some of its not-so-secret elements.