Below the bedrock, explore a cavernous world of breathtaking natural wonders

I’m perched
on the stony lip
of a gaping hole
in the prickly Chihuahuan Desert scrublands
near Del Rio,

checking and rechecking the rappelling harness buckled snugly around my waist. Forty-five feet below, four fellow cavers stand atop a bus-sized mound of bat guano, blinking up at me as I lean back for the drop into the shadows of Punkin Cave.

I’m afraid of heights, and the thought of plummeting four stories into the bowels of the earth is making my hands shake. I squeeze my eyes shut for a moment, trust the cavers who are belaying me, and lower myself slowly into the abyss. For the next few minutes I dangle in midair, scuttling down the rope like a spider on a silken thread.

More than 5,600 documented caves twist and turn their way through the limestone and gypsum bedrock that comprises much of Texas’ underbelly. That’s a lot by any standard, but it’s even more impressive considering most of the state is privately owned land, where caves haven’t been investigated or mapped. Many of the known caves are clustered along the Balcones Fault Zone, a crack in the earth’s surface that curves from Waco to San Antonio and west toward Uvalde County; and along the Llano Uplift, a geologic dome of rock in the Hill Country west of Austin.

Caverns like Punkin Cave—which spreads its tentacles beneath a 225-acre property owned by the Texas Cave Management Association—provide vital habitat for the likes of bats, salamanders, flatworms, fish, insects, and even microbes that could one day provide the source of new antibiotics. Their delicate passageways serve as an underground plumbing system, funneling water that bubbles forth in springs and feeds city utility systems. Caves also provide clues about the health of the environment above ground.

And although they’re easy to overlook, caves face the same risks posed to the rest of the environment as Texas grapples with rapidly growing urban and industrial development. Tainted runoff and infill are two of the primary dangers to caves, according to the Texas Cave Management Association. That’s why the San Antonio-based nonprofit works to preserve caves and shed light on their sometimes-hidden role in the natural order.

“In my eyes, caves are no different than creeks or wetlands or anything involved with the natural process going on around us,” says Jim Kennedy, an officer in the Texas Speleological Society who’s leading our exploration of Punkin Cave. “The species in caves are like canaries in a coal mine. They’re environmental indicators, and they’re highly specialized. If they start dying and disappearing, that tells us something bad is happening, like pollutants or runoff.” 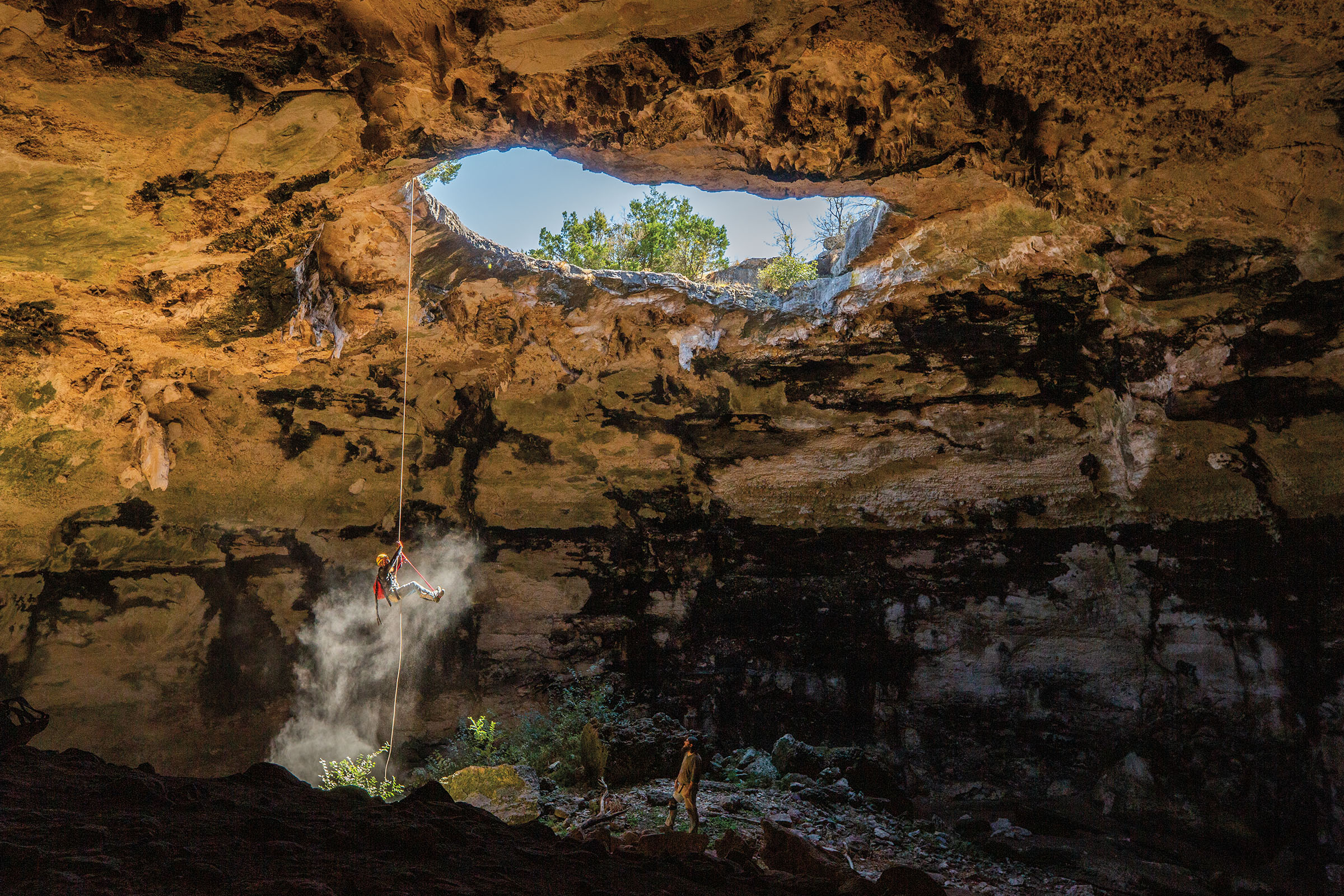 After landing on the guano pile in Punkin Cave, I pull a buff over my nose to block the guano dust and dull its acrid aroma. Kennedy then leads our group of five into a tunnel, where we crawl on hands and knees down a narrow passage with our headlamps shining ahead. At the front of the group, Kennedy hollers out a warning: “We’ve got bats!”

With a rustle and a whir of flapping wings, hundreds of the flying mammals suddenly swoop past and bounce off me. When one finds its way up my left pant leg, I push the furry, fig-sized creature out, and silently thank Kennedy for loaning me a pair of knee pads, which are strapped tightly around my calves. 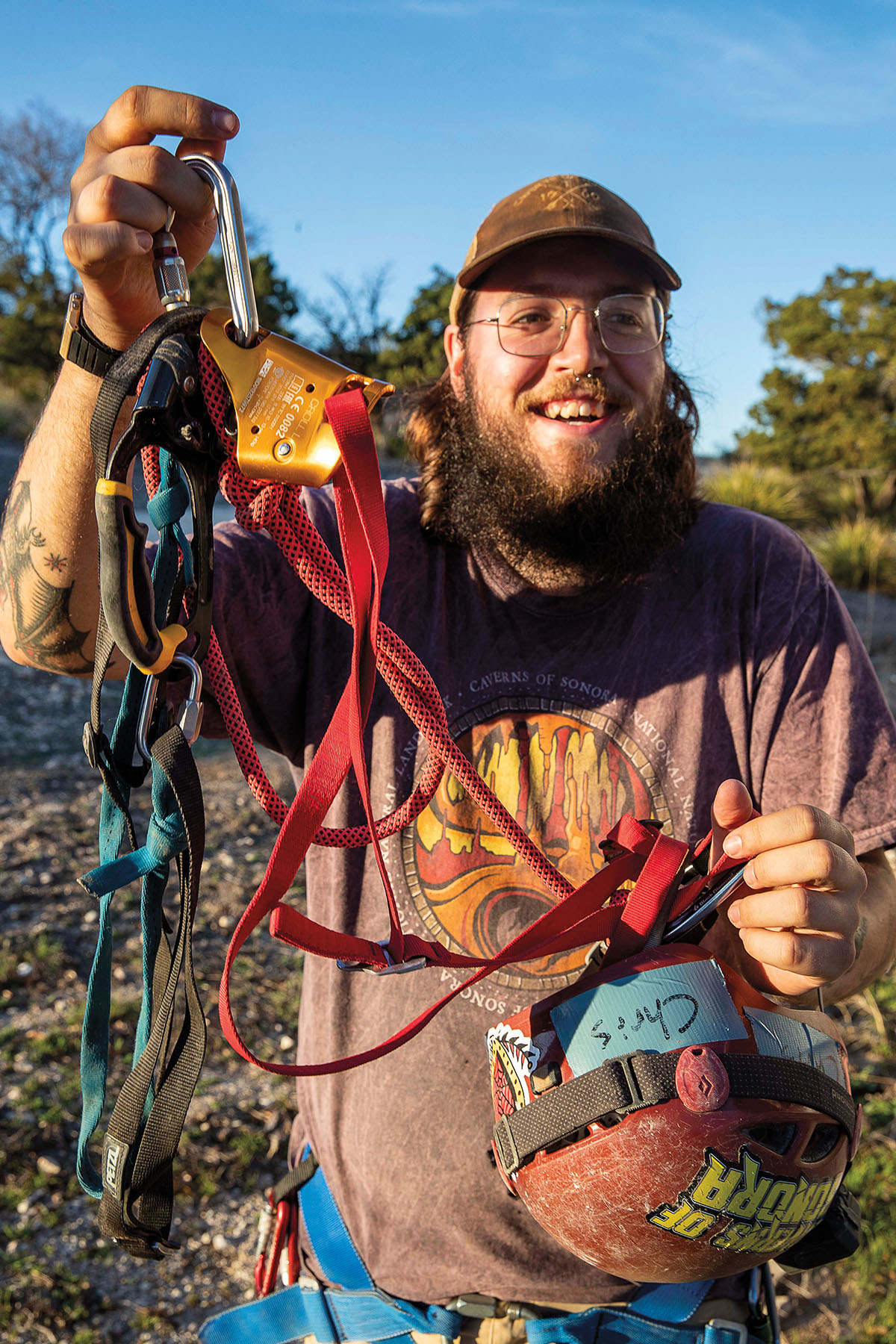 Cave creatures don’t often win popularity contests, Kennedy notes. Most are pale because they don’t need pigment to protect them from sunlight. Many are blind and have long appendages to feel and sense vibrations. But that doesn’t diminish the significance of creatures like salamanders and cave crickets. They’re part of an intricate ecosystem.

“Tigers are cool, elephants are cool. But is an elephant more important than a salamander?” asks Kennedy, a conservation biologist. “Does it have more impact on the environment?”

Over two days, we explore Punkin Cave and the neighboring Deep Cave. Neither of these caves are open to the public. The Texas Cave Management Association opens them for scientific research and educational trips—so people like me can help spread the word that caves, like rivers or mountains or forests, are an important part of our ecosystem.

During our expeditions, we slide down tongues of rock and creep over gaping maws. We encounter a room with a slab of rock big enough to serve as a nightclub dance floor; in another we find columns so stout I can’t stretch my arms around them. We squeeze through cracks, ooze over boulders, then shimmy up chimneys, bracing our arms and legs against opposing walls. With a black light
illuminated, we watch scorpions fluoresce against a milky wall.

“It’s like an all-natural playground made for adults,” Kennedy says with a grin as our group resurfaces after climbing a rope out of Punkin Cave. I survey the dust billowing from my body and notice a plate-sized hole ripped in one of the three shirts I’m wearing. I’m glad for the extra layers I wore to stay warm underground. While most caves hover around 70 degrees, temperatures in Punkin Cave stay at about 50 year-round. 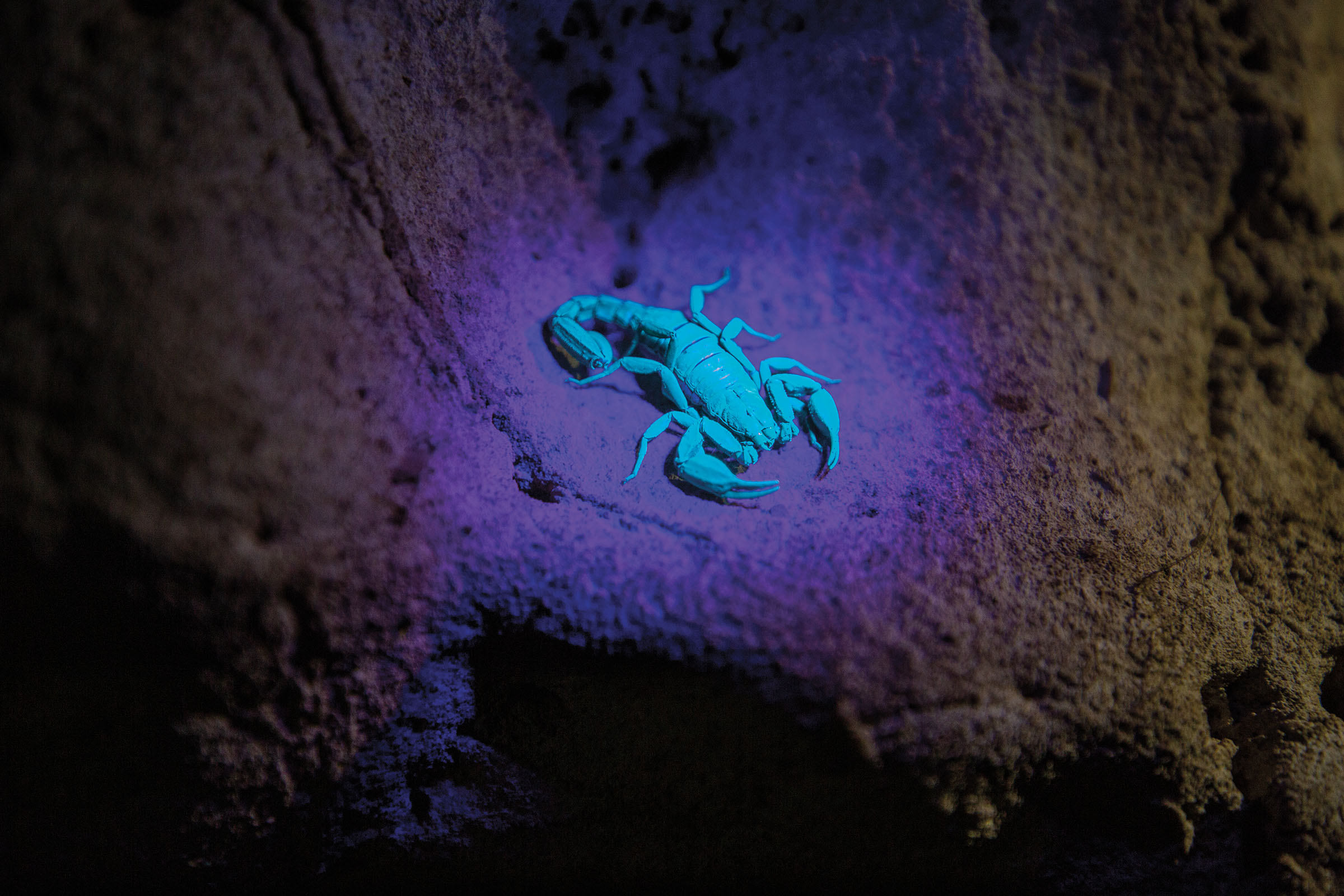 Caving provides a distinct perspective on Texas’ natural history, a tale of seeps and slips. Most caves develop over vast periods of time as rainfall soaks into the soil, working its way into the earth and mixing with carbon dioxide to form a weak acid. The dripping water works like hot tea on a sugar cube, albeit at a much slower rate, finding its way into cracks and eating away at the bedrock to create pathways. 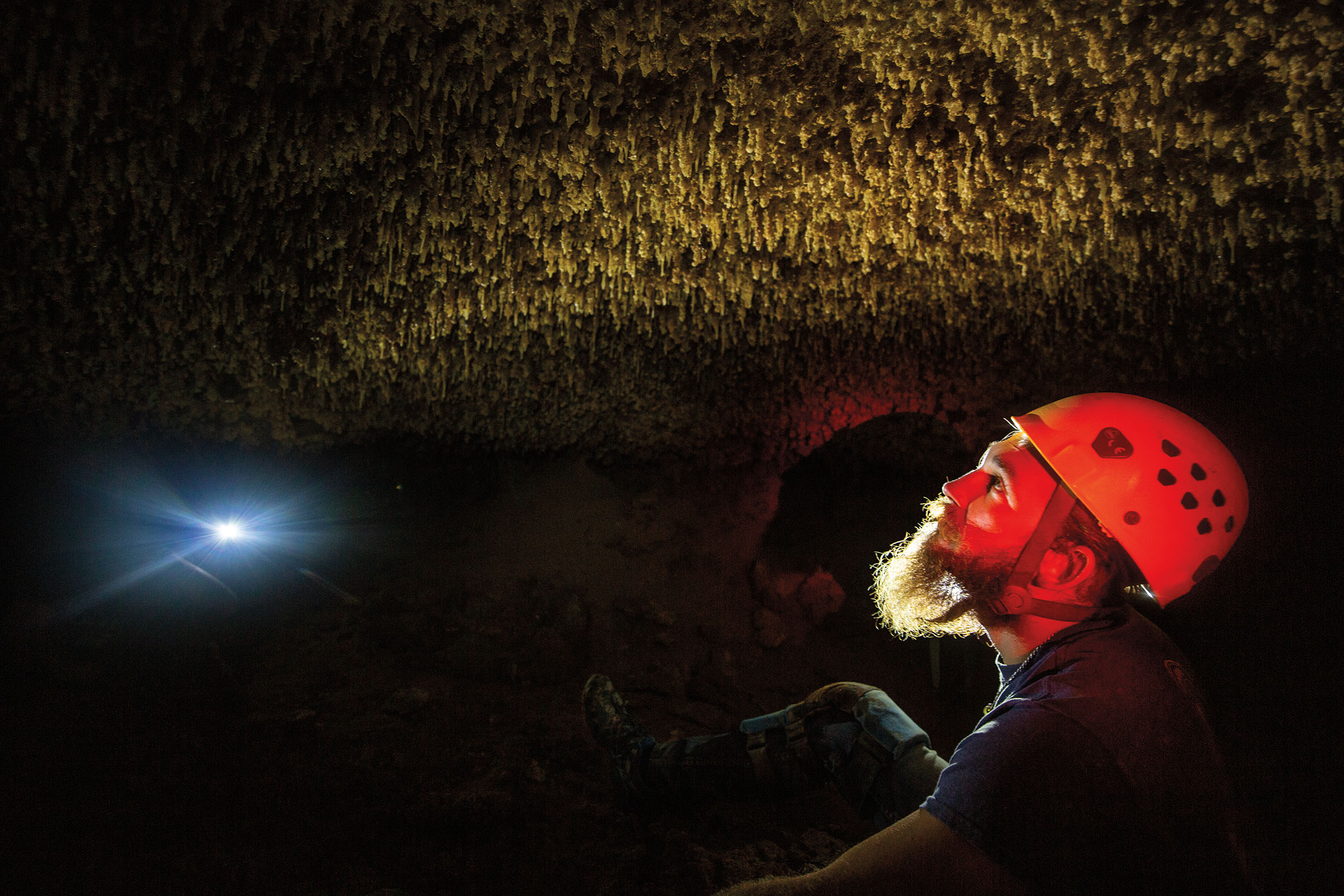 Colton Moore eyes speleothems in the Caverns of Sonora.

Other caves form through mechanical processes, like the slippage of underground strata, or layers of rock. Yet other caves are known as hypogene caves, which form when sulfuric acid from hydrocarbon deposits mixes with groundwater. As the water rises to the surface, it eats away at the rock, eventually creating caverns. Punkin and Deep are hypogene caves, as are other well-known West Texas caves, including Kickapoo Cavern, Devil’s Sinkhole, and Caverns of Sonora.

The Sonora caverns, which are about 8 miles west of the town of Sonora, may be the most spectacular caves open to the public in Texas.

“It is one of the most concentrated formation areas in the world,” contends Colton Moore, 30, a member of our party at Punkin Cave who began guiding at Sonora when he was 13. Most caves don’t have any helictites, a type of speleothem, or formation, that look like branching twigs. “We have massive concentrations of them,” he says.

He’s not exaggerating. One of Sonora’s chambers, dubbed The Hall of White Giants, is so filled with delicate white speleothems that it looks like an antiques shop packed with chandeliers and glass-blown figurines. Other parts of the cave are covered in formations that resemble everything from cauliflower plants to melted ice cream.

On Sonora’s Discovery Challenge Tours, participants don helmets, gloves, and kneepads and venture into areas that aren’t lighted or developed. They bellycrawl through passageways and rappel down a rock face into an area called the Devil’s Pit. (The cavern also offers more relaxed walking tours along 2 miles of easy-to-navigate concrete pathways.)

“To surround yourself in a crystal environment like that is pretty special,” Moore says, noting that it took up to a million years or more for the caverns to form. “Caves give us an idea of time. They really slow you down and make you wonder and realize how old our planet is—and what time is actually capable of.” 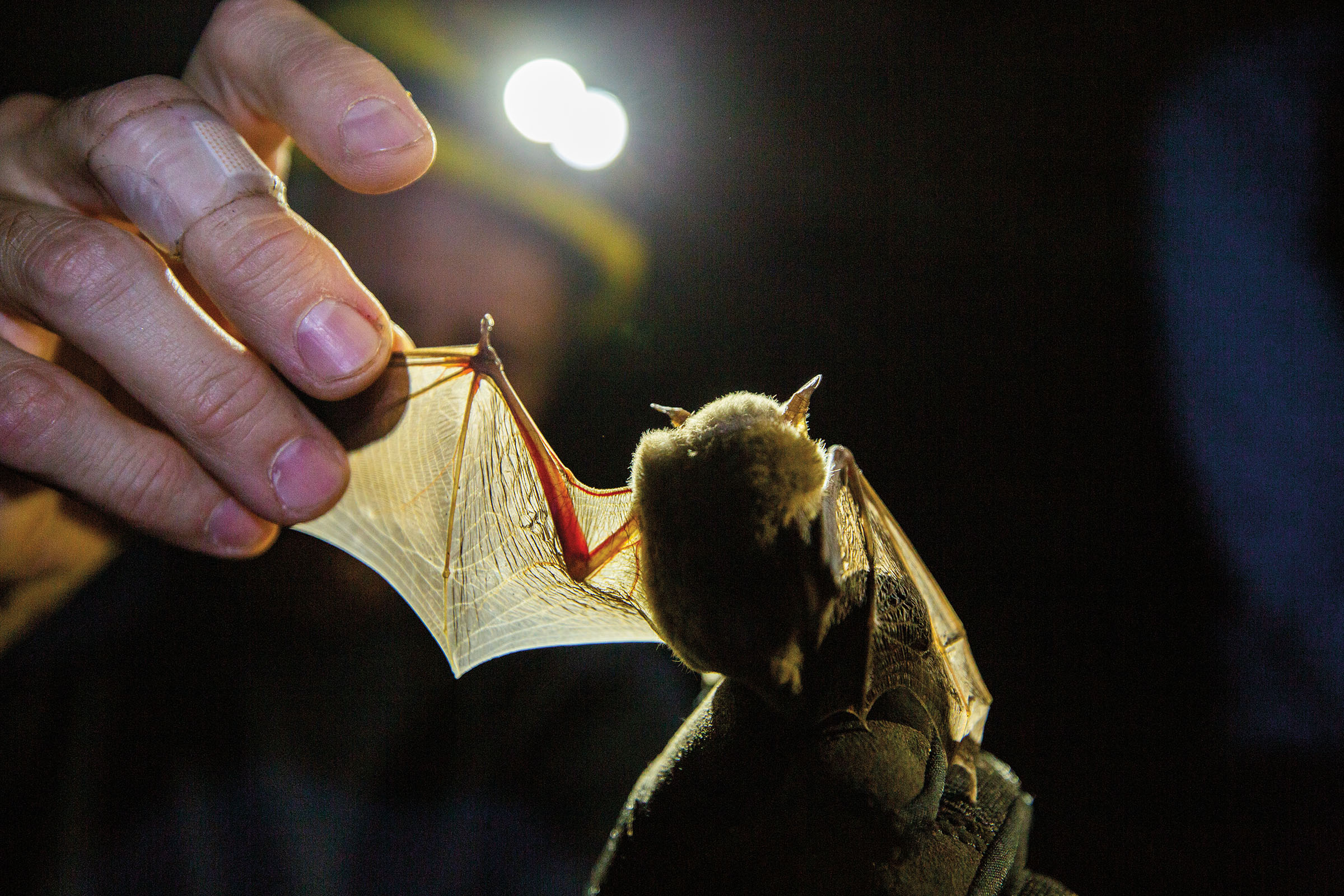 A tri-colored bat in Deep Cave.

Regardless of how a cave is formed, it isn’t necessarily born with an entrance. Entrances are “accidents” that happen later, sometimes during construction projects. That’s how Inner Space Cavern near Georgetown was discovered. In 1963, crews were taking core samples in preparation for the construction of Interstate 35 when suddenly their drill bit dropped into a cave. Inner Space opened for tours in 1966, and these days, more than 100,000 people per year visit for excursions that range from easy walking paths to gritty, off-trail expeditions.

Even the state’s most well-known commercial caverns represent just a small window into their underground worlds. Bill Steele, a prominent Texas-based caver, had a hand in the 2019 discovery of a new passageway at Natural Bridge Caverns, located north of San Antonio. After a visit to Natural Bridge in 2018 with one of the people who originally explored the cave in the 1960s, Steele asked if there was any place in the underground labyrinth they had never reached.

“They pointed right at a dome well off the tourist trail and said, ‘We think there’s a big passage here,’” Steele says.

Steele and other cavers returned with bright lights, which indeed exposed a tunnel. In April 2019, they flew a drone into the 600-foot passage, and a month later a climber scaled a 100-foot wall, which led to the passage and a 6-foot-wide pit. One of the cavers rappelled about 90 feet down into the pit, where he found pools of water and white flowstone. Another expedition led to even larger rooms.

Steele thinks many more caves lie undiscovered beneath the surface of the state, especially on the Edwards Plateau and on the south end of the Permian Basin. Some of them, he says, could be as big as Carlsbad Caverns, a national park in New Mexico. According to lore, a cowhand discovered that cave when he thought he saw smoke rising from a wildfire. But what he actually saw was a stream of bats emerging from the cave. 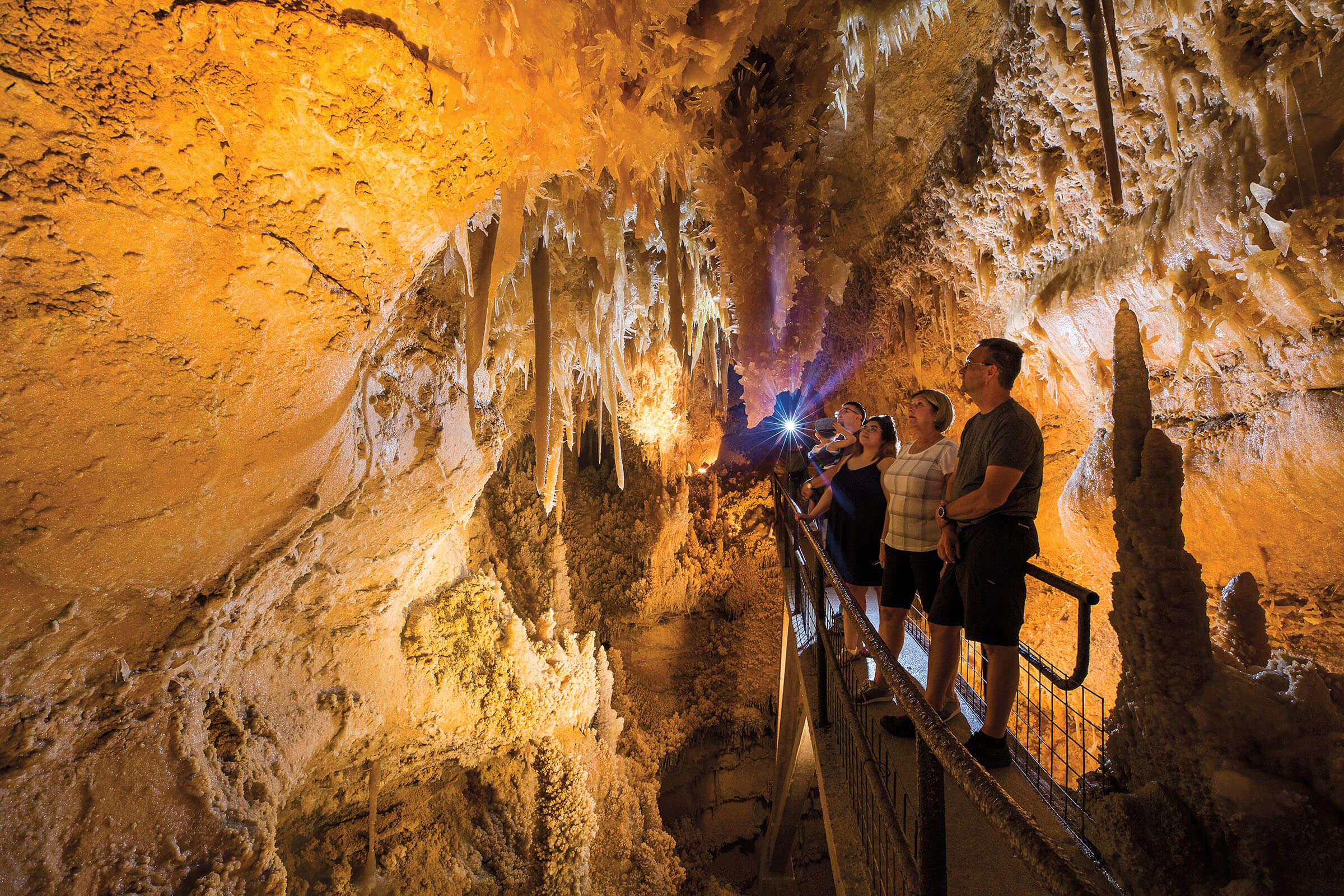 A Caverns of Sonora walking tour. 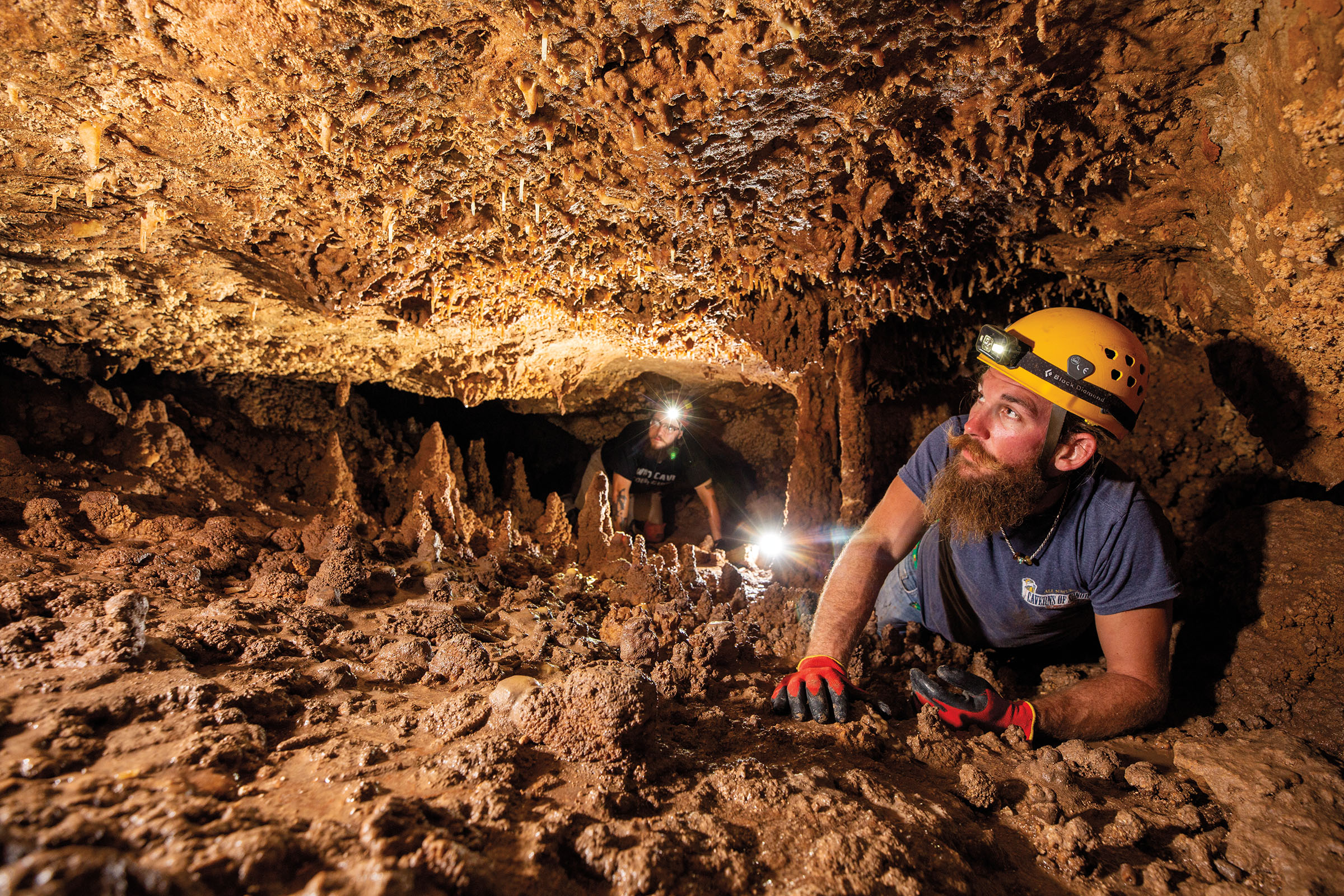 Many caves are hot spots for biodiversity that should be protected, argues Kennedy of the Texas Speleological Society. But humans are over-pumping aquifers, building in fragile areas, and discharging wastewater. “Dozens of caves are discovered and destroyed every year,” he says, when developers fill them with grout.

That’s why he’d like to see more people learn about caves, and commercial cave tours are a prime opportunity. “People don’t protect what they don’t understand or know or see,” he says.

Texans can also help protect caves in their day-to-day lives by curbing the use of chemicals on their lawns, properly disposing of oils that might find their way into the water stream, and conserving water. As a state, he says, Texas can protect sensitive environmental areas by routing roads, shopping centers, and homes away from known caverns.

To that end, Steele is actively exploring Honey Creek Cave, located in the fast-growing area between New Braunfels and Boerne. At 21 miles, it’s the longest-known underground passage in Texas. Steele says a potential housing development threatens the cave because it would disturb the drainage that runs past its entrance.

“Caves are non-renewable natural resources,” Steele says. “They’re also timeless. I could tell you a bunch of stories about following footsteps in a cave and knowing I’m only the second person there, and the first was 3,000 years before me.” 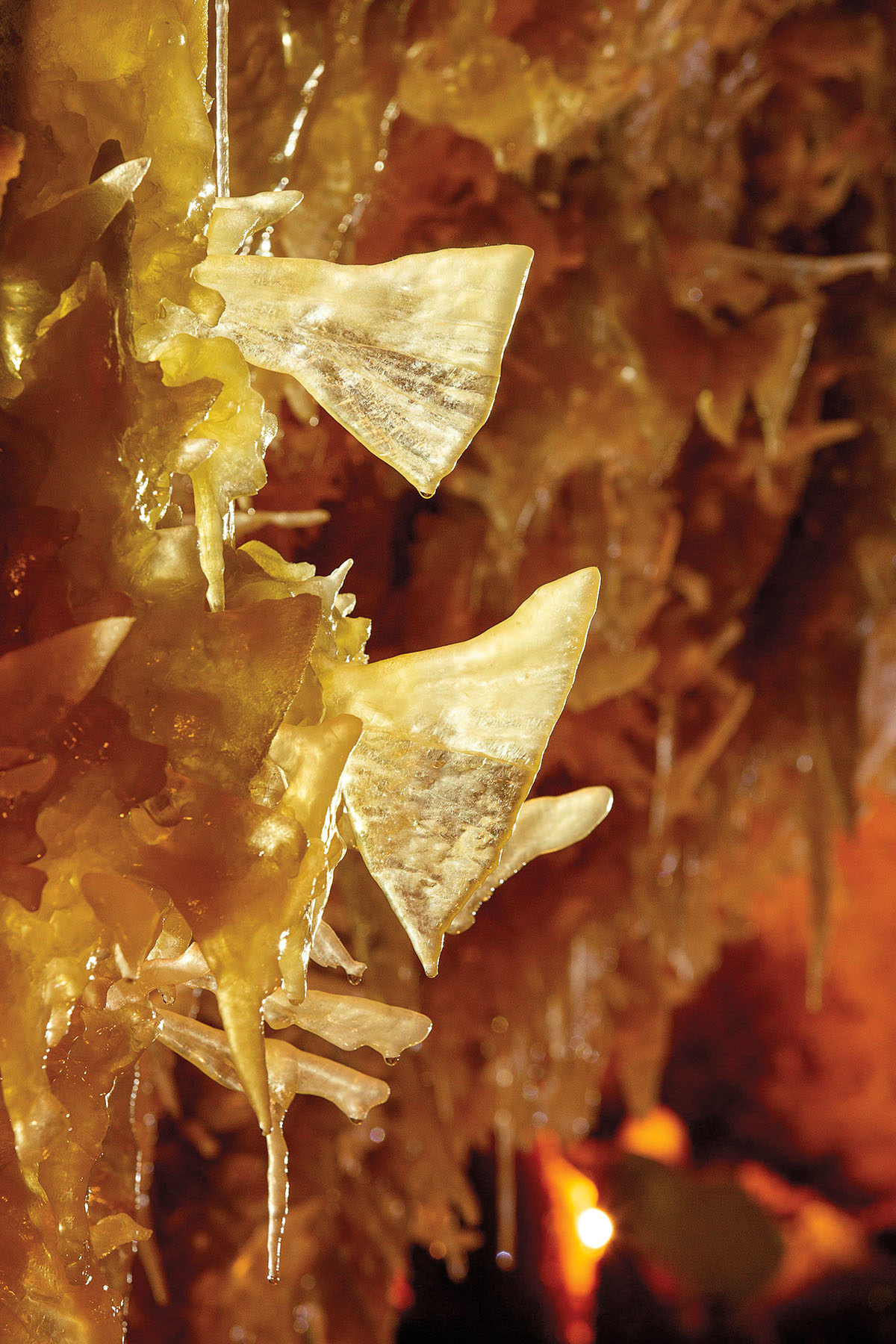 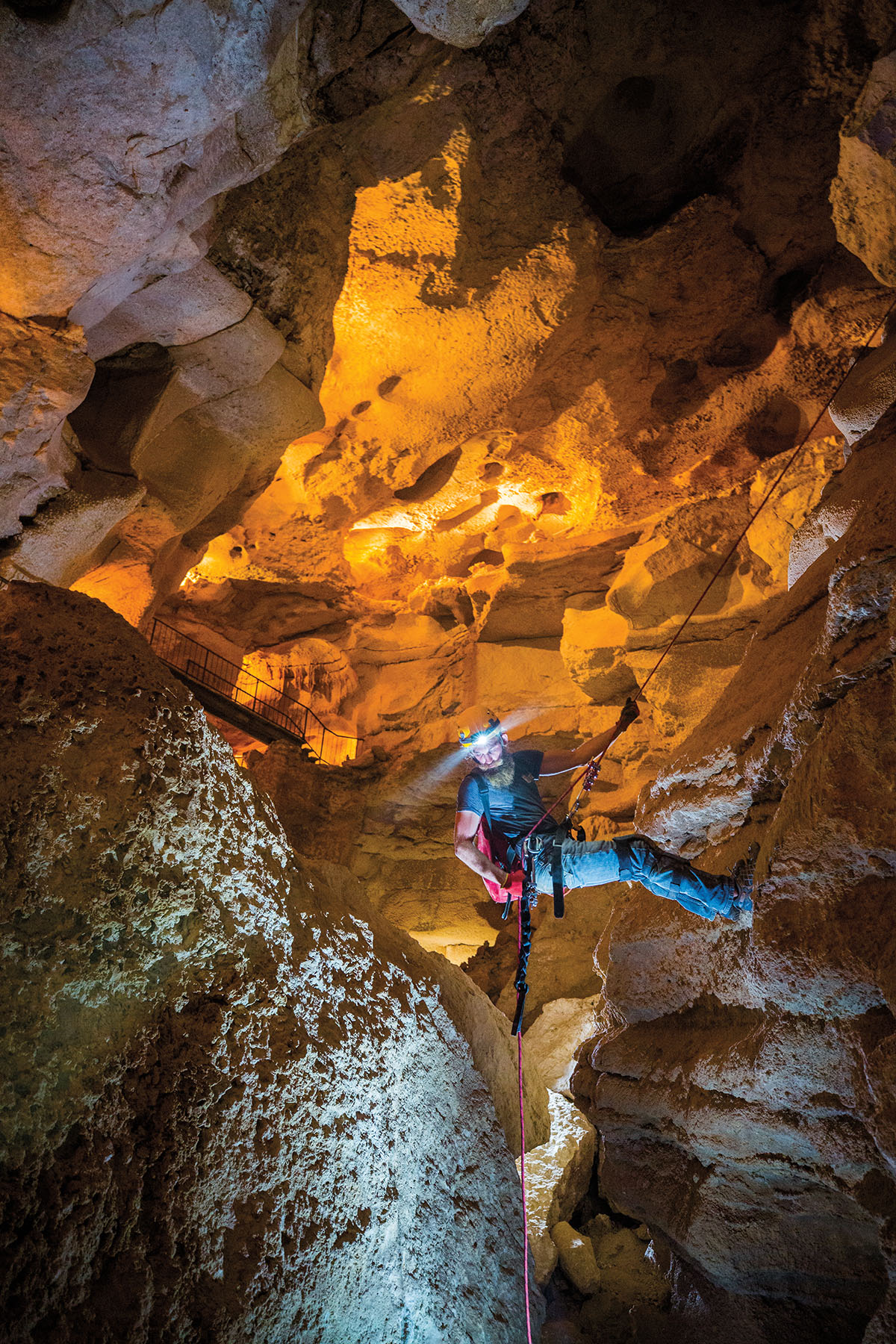 A walking tour through any of the state’s commercial caverns will give you a glimpse of what our state looks like beneath the surface. No special gear is required—just a pair of good walking shoes. A few caves also offer adventure tours, which involve crawling through tight passages and getting dirty, and in the case of Sonora, a 50-foot rappel. For these you may need a helmet and elbow and knee pads, which are provided by the tour operator. Call ahead for ticket prices.