Written by: Sofia Sokolove
Photos by: WIll van Overbeek

Written by Art Williams, Photographs by WIll van Overbeek | From the February 2016 issue | Updated: February 10, 2016 | Filed Under: TRAVEL 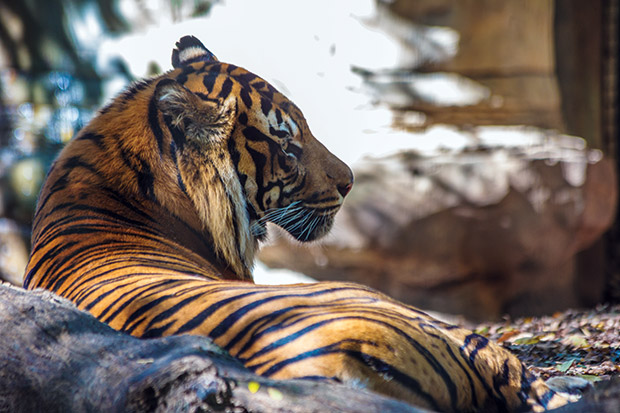 “I think it’s sort of like a choose-your-own-adventure,” I say to my boyfriend, who’s driving as I study a colorful map of Waco’s Cameron Park from the passenger seat. We’re making the two-hour drive from Austin to enjoy an active weekend of hiking and sightseeing, but neither of us knows what to expect. We’ve read that the 416-acre park, which is celebrating its 106th anniversary this year, has sweeping views of the Bosque and Brazos rivers, options for paddling and fishing, and more than 20 miles of trails for hiking or biking. Yet it can be a little hard to know where to begin.

For details about Cameron Park, including hours, park maps, and suggestions for renting bicycles, paddleboards, and kayaks, call 254/750-8080.

For information on Waco hotels, restaurants, activities, and attractions, call 800/321-9226.

Luckily, there’s an app for that. Before our trip, we had downloaded the free Cameron Park App, which offers several different maps, information on renting the park’s many community spaces, safety tips, and even a disc golf scorecard, if that’s your thing. The app also gives directions and information on some of the park’s most popular points of interest, such as playgrounds, splash pads, and the Cameron Park Zoo. Located in the southern part of Cameron Park along the Brazos River, the 52-acre zoo is home to more than 1,000 animals. Listen closely, the app instructs, and you might hear a lion’s roar echoing along the river and wooded trails of the park.

Guided by the app and some advice from friends, we decide to start with one of the park’s best-known sites, a 90-foot-high cliff called Lovers Leap. With two pavilions, a wheelchair-accessible walking trail, and public restrooms, Lovers Leap offers one of the best views in the city, and it also comes with a story: According to legend, this was the site where, long ago, two star-crossed lovers from warring tribes met in the middle of the night to elope, only to be confronted by the girl’s family. Rather than face a lifetime apart, the two embraced and leapt to their death into the Bosque River below.

Cameron Park itself came into existence in 1910 when its first section, a beautiful 100-acre area known as Proctor Springs, was donated to the city by Flora B. Cameron, the widow of Waco philanthropist William Cameron. Cameron also included $5,000 for development, along with the stipulation that the land would be used exclusively as a public park.

Before heading to the park, we check into the lovely Hotel Indigo, just south of the Brazos near the Baylor University campus. We make a quick caffeine stop at Dichotomy Coffee & Spirits, where we fuel up on some of the best iced coffee we’ve ever had, then hit the road. As we snake west along serpentine Cameron Park Drive and enter the park, the sounds of the city fall away as mountain bikers, runners, and walkers dodge in and out of trails. Dappled light filters through the canopy of trees, and traveling the road feels like an escape in and of itself.

At the top, we reach Lovers Leap, where we are rewarded with a spectacular view of the Bosque River. In the distance, just out of sight, the Bosque and Brazos rivers come together; here, a lookout point called the Mouth of the Bosque is worth a visit on its own.

We decide to keep moving (although we vow to return to this spot sometime for a picnic) so we’ll have time to tackle one of the park’s other most popular challenges: climbing Jacob’s Ladder, a quirky, zig-zagging staircase that connects lower trails to elevated ones above it.

Heading back to the car, we check our phones to find our way there. Here’s a confession: As we explored the park’s various points of interest, we relied on our iPhones more than I had expected for a nature-themed weekend. One of the reasons is that the park, which isn’t laid out in a traditional grid, isn’t exactly directionally intuitive. I am relieved to hear Kim Jennings, a park ranger since 2001, offer this piece of advice when I catch up with her after our visit: “If someone is coming from out of town,” she says, “I always recommend that they download the Google Maps app. All of our trails are loaded up into Google. And if you do a location pin of where you are, navigation will pick up and the GPS will guide you along the trails.”

As we climb the 88 concrete steps of Jacob’s Ladder, clutching the beautiful weathered wooden handrails, I’m proud of our steady pace until two fellow climbers speed past us. By the time we’ve reached the top, panting but victorious, they’ve lapped us. We all high-five at the top, and while my boyfriend and I pause to catch our breaths and admire yet another view, they sprint off into the open green space beyond the top of the ladder. 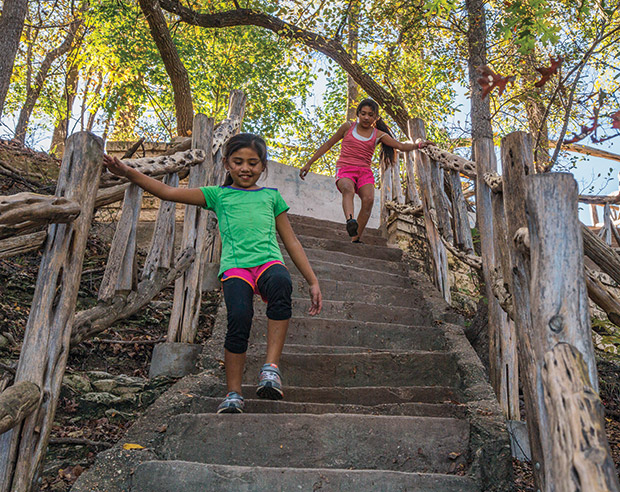 Throughout our weekend, while we casually explore the trails on foot, we get the sense that many of the people sharing the trails with us are training for something. This mix between leisurely and serious athleticism is one of the park’s great allures: You can go at your own pace. But in the world of competitive mountain biking, we learn, Cameron Park’s trails are gold.

Octogenarian Fred Schmid, a world-champion mountain biker who lives in the Cameron Park neighborhood, puts it this way: “I’ve raced trails from Vermont to San Diego, Oregon to Georgia, and lots of places in between. I can honestly say Cameron Park can compete with any of them.”

His advice to those looking to ride the trails? “Use the maps to find color-coded trails appropriate to your level, whether you’re a novice or advanced,” he says. “The labels are pretty honest. But don’t be embarrassed to walk something that’s new to you. I often do that at new venues, then after scoping it out, I come back to ride.”

The bikers aren’t just regular users of the park; they’re also instrumental in keeping it running. “Since we frequently use the trails, we feel obligated to help maintain them,” explains volunteer Rusty Hansgen, a former president of the Waco Bicycle Club. Volunteers, he explains, spend nearly 800 hours each year working on the park, doing things like clearing fallen trees, cutting back spring growth, and refurbishing trails damaged by erosion. In the 15 years since Hansgen has been using the park, the Waco Bicycle Club has built about eight miles of new trails and 10 bridges.

And the city has done its part, too: After a 2008 bond election, Cameron Park underwent a multi-million dollar renovation, during which workers renovated pavilions, resurfaced roads, and added parking, restrooms, spray parks, disc golf courses, access bridges, and signage. And while visitation has increased dramatically since the renovation, the park still feels undiscovered as we make our way through it.

“It’s one of the best kept secrets in Texas, I think,” says Todd Harbour, Baylor’s head cross country coach, who has been using the park since the 1970s, both as a coach and an athlete. “Back then, we had one or two trails; now they’re making one, two a year. When I bring recruits into town, before I even show them around campus, the first place I take them is to Cameron Park,” he says. “By the time we get back to campus, they’re saying, ‘Wow, I didn’t know Waco was this pretty.’”

That’s a little bit how we’re feeling as we stand triumphantly at the top of Jacob’s Ladder. As we wander out toward the expansive open green space and onto a granite trail, I hear myself saying “This is pretty!” before realizing that we are, in fact, at a spot called Miss Nellie’s Pretty Place, a wide stretch of rolling land that includes a walking trail and fountain plaza. We’ve caught the end of springtime wildflower season, and the Indian paintbrushes and black-eyed Susans are still in bloom. We feel lucky to have stumbled onto it.

We spend the rest of our weekend wandering on trails and discovering things of beauty. On a trail called California 56, we find ourselves walking through forests of bamboo. “When the wind blows through the bamboo, it just makes a different sound than the rest of the park,” Jennings tells us later. Along the River Trail, which winds along the edge of the Brazos River, we get a totally different view of Lovers Leap by staring up at it from underneath. Had the weather been warmer, we probably would have jumped into a kayak or even a paddleboard. “One of the most convenient rental spots is a store called Bicycle World,” says Jennings. “Have them drop you off at Brazos Park East near the horseshoe pits, and paddle up the Bosque River,” she suggests. “You’ll pass underneath all the cliffs, and from that viewpoint, they’re really impressive.

“I personally think it’s the best thing that Waco has to offer,” Jennings continues. “And if you come visit Waco and you don’t get a chance to see the park, you’re really missing out.”