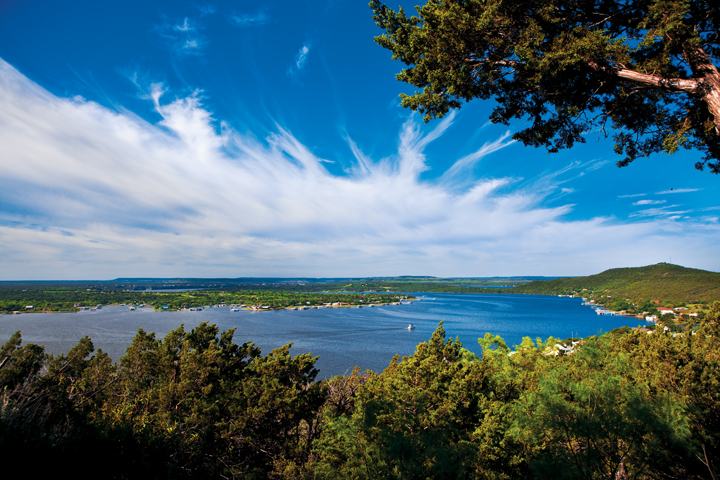 Cliff-top panoramas of Possum Kingdom Lake—such as this vista from the Angel View scenic lookout—reward trekkers on the Brazos River Authority’s 16 miles of hike-and-bike trails. (Photo by Kenny Braun)

And our spring trip to Possum Kingdom Lake delivered this requisite bliss in abundance. Tucked into the Palo Pinto Mountains on the upper reaches of the Brazos River, the 17,000-acre lake (known simply as “PK” to the locals) lies some 90 miles west of Fort Worth, and draws Metroplexers and other neighbors to its picturesque shores for watersports (boating, skiing, swimming, fishing, and scuba-diving), along with trail treks, cabin hideaways, and resort retreats.

Even the placename suggests the unpretentious adventure we seek—a modest creature roaming its paradisiacal realm. But in fact, the hilly lake setting alone proved all the enticement my family needed, so I set off with my husband, Scott, and our seven-year-old son, Lucas, for three days in the Kingdom.

So how did the lake get its name? I pose the question to Rocky Holland, superintendent of Possum Kingdom State Park, situated on the lake’s western shores. My family has just blown into the park (literally) behind a spring thunderstorm, and we’ve joined Holland at a lakeside picnic table in the early-morning sun.

It turns out that there’s more than one story behind the name’s origins, the most popular relating to the region’s once-bountiful possums and raccoons and a fur trader named Ike Sablosky, who settled in the area in the early 1900s. Sablosky called his main hide suppliers “the boys from Possum Kingdom” and the appellation endured, even after the lake inundated the area in 1941.

“We see more skunks now,” says Holland. “It’s probably a good thing that the founders went with that name.”

Other residents of the 1,528-acre park’s wild kingdom include white-tailed deer and foxes, and birders will spot turkeys, migrating cranes, and endangered species like the golden-cheeked warbler and black-capped vireo. “We also see bobcats pretty regularly,” says Holland, “and we found mountain-lion tracks last year.”

Lucas perks up at the possibility of a big-cat sighting, so we head for what turns into a short bicycle exploration of the park’s two miles of rugged, cedar- and oak-lined trails. The rain has flooded our path, so we pedal back past the park cabins, which number four at the moment (each has a kitchen and sleeps four), with two new structures to be completed in late 2010. A nearby lodge, also with a full kitchen, sleeps eight. It’s all about location at PK State Park; all of the cabins, campsites, and picnic areas lie within yards of the water.

At the park store and marina, you can rent a boat (canoes, kayaks, jet skis, ski boats, and pontoons) and buy groceries, gifts, and fishing and camping supplies. Owners Jeff and Lisa Nichols stock everything from stuffed toy possums to bobber lights for your camper.

Jeff Nichols, the go-to guy for PK fishing tips, tells us that the lake is among the deepest in Texas. “It’s well over 100 feet at its maximum depth,” he says, and adds that the lake-bottom terrain is varied, which proves good for fish, and fishing. “The variation provides the fish with shallow water
and access to deep water. You can find fish in all parts of the lake.”

Crappie, sunfish, and catfish all swim in PK’s waters, but the bass (large-mouth, striped, and white) provide the big draw for anglers. As Lucas and Scott ogle a countertop display of photos depicting the lake’s big catches (the PK record large-mouth weighed 16.02 pounds and stretched almost 27 inches), Nichols reveals that the lake has been experiencing the beginnings of a golden-algae outbreak. The algae, which could turn PK’s sparkling, clear waters the color of tea, proves lethal to gill-breathers. Conditions usually improve in summer as water temperatures rise. [Press-time update: Nichols reports that the spring kill appears to have been marginal; anglers are catching all species of fish, and spotting young fish in the waters.]

We drive through the park one last time on our way out, and pick the perfect shoreline campsite for our next visit. This trip, a cabin awaits us on the lake’s Peninsula, which lies east of the park- some five minutes by boat, and 45 minutes by car. We make our way east along US 180, then turn up scenic Texas 16, which winds into hilly Palo Pinto terrain and back toward the lake. We cross the 1940s WP A-built arch bridge just below Morris Sheppard Dam, a popular put-in point for canoe excursions along the John Graves Scenic Riverway stretch of the Brazos. (Rochelle’s Canoe Rental lies just downriver on FM 4.) We pass the Possum Kingdom Fish Hatchery, which produces striped bass, smallmouth bass, and catfish for PK Lake and other lakes across Texas.

The heart of PK activity, the Peninsula area hums with pockets of restaurants, convenience stores, and a grocery, along with homes and rental cabins, Brazos River Authority trails and public-use areas (including Sandy Beach, with its popular swimming area), and—a big eye-brightener for Lucas—the new PK Speedway go-kart track. Scott and I make a mental note to add the track to our itinerary, as if Lucas is going to let us forget.

Lodging options abound on all sides of the lake, from tent campsites to cozy cabins to ritzy resort accommodations. Our simple waterside bungalow at Golden Cove suits us perfectly, with two queen beds, a kitchenette, and on the grounds, picnic tables and grills, a sandy beach area, and a grassy strip that juts into the lake, from which we would later cast our lines. “We’re known for our spectacular sunsets … and the deer,” says Stephanie Taylor, a member of the Golden Cove crew. Indeed, the furry creatures arrive by the dozens that evening, just as the sun begins to dip below the Palo Pintos.

Enchanting daybreak views of the lake’s placid surface fuel our eagerness to get on the water. If you don’t have your own boat, several PK businesses offer rentals, including Sam’s Dock, Naylor by the Water, The Cliffs Resort, Golden Cove, and the state park store and marina The Brazos River Authority maintains 10 public-use areas along the Peninsula and beyond, most of which feature boat landings. PK tip: Before you navigate the waterway’s sinuous course for the first time, pick up a visitors guide and maps from the Chamber of Commerce, on the lake’s north end.

We motor out from Villa Marina at Scenic Point Cove and head east toward Morris Sheppard Dam. It’s too early in the day (and in the year) for any bustle of boaters and jet-skiers, so we relish a quiet cruise along limestone cliffs studded with cedar and prickly pear, as well as vacation homes and resort
communities. We pass below Observation Point, an overlook 115 feet above the lake at the Brazos River Authority headquarters (accessible by land off FM 2353), and glide beside the 190-foot-high dam, constructed between 1938 and 1941.

We backtrack westward around Gaines Bend, where a hundred or more pelicans have made a temporary inland stop. As we whiz by, the dazzling white wonders streak away in V formation in search of a quieter perch.

Our lake exploration continues along the grassy shores of three scenic camps (two belonging to the YMCA and one to Boy Scouts), which make me wish I were 10 again, and around natural curves called Johnson Bend, Hog Bend, and Bone Bend to the tip of the Peninsula area. A boat-tour highlight on the lake’s southern end: The close-up view of Hell’s Gate, a 50-yard-wide canyon formed by two 80-foot cliffs (one an island). Hundreds of cliff swallows’ mud nests cluster on the striated slabs of stone. Pam Wheat at the PK Chamber had told me that the swallows help to control the mosquito population in summer. She also described the impressive Fourth of July celebration here, and I imagine the flotilla of onlookers and the psychedelic “curtain of  fireworks” bursting between the two bluffs.

We cover only a portion of the PK expanse on this ride, and our land legs return in full force at PK Speedway Family Fun Center, a go-kart track/arcade/party-place combo billed as “The Fastest Fun Out of the Water!” Choose from several go-karts (one- and two-seaters), depending on the
driver’s age, size, and skill level. A newbie to racetrack action, Lucas transforms from slowpoke to Talladega great within a few laps. Zoom, zoom!

We’re bicycle-bound this day, anxious to see PK vistas from the heights. Over the last four years, the Brazos River Authority has opened 16 miles of hike-and-bike trails that connect the parks along the Peninsula and wind through oak and cedar forests to various cliff-top vantage points. The hikes are moderate (depending on the distance you choose to travel); biking proves more challenging. (Plan to bring your own bike.)

“The slope averages five to 12 degrees, but some areas can slant up to 25 degrees,” says the Brazos River Authority’s Judi Pierce. Rocky areas  (especially after a rain) can add to the trail challenges for bikers-plentiful switchbacks make the rides doable, but difficult. Jaw-dropping scenery rewards all successful trekkers.

Lucas and I walk our bikes along the steep stretches, while Scott pedals ahead and waits for us to catch up. From one trailhead, we reach Johnson’s Peak, the highest peak in the area (about 350 feet above the lake). From another, we take in 360-degree views from scenic lookouts named Angel View, Ike’s Haunt, and Island View. Along the way, we meet a local family with two toddlers out for a morning stroll, a couple from Dallas here for a stress-busting weekend, and a man who will soon be moving out-of-state making one last sentimental PK journey. Two wild turkeys scurry across our path.

Scott pronounces the Brazos River Authority trails his new mountain-biking favorites, and young Lucas, still energized by the adrenaline rush of the final downhill stretch, announces that he’s ready to go back up the hill. My aching legs disagree.

We spend our last PK evening relaxing in front of our cabin. As the daylight fades on our dinner picnic, Scott and I listen to tranquil lake waves and Lucas’ giggles as the chilly water splashes his toes. I savor the moment as I think about something park superintendent Rocky Holland had said on the first day of our visit. “Family time is so fragmented, with school, work, activity schedules, and other daily distractions. Here, all you have is each other.”