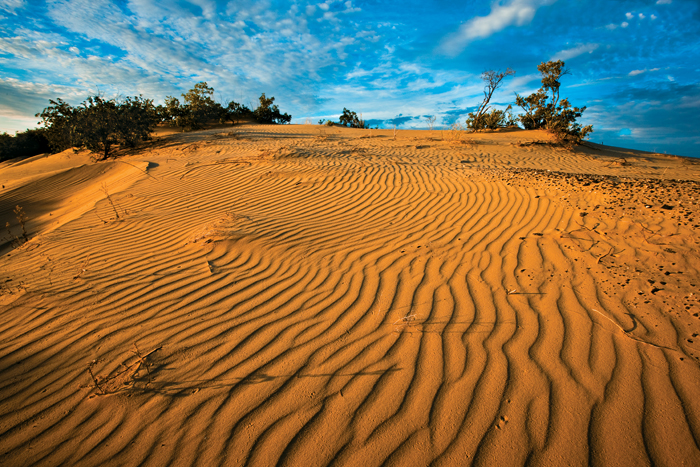 When cartoonist friend Roger T. Moore, a West Texan with a sense of humor as big as one of the dozens of wind turbines looking down on his ranch, told me that the largest oak forest in North America covers some 40,000 acres near Monahans, it sounded like a setup. Yeah, right, I laughed, downloading a mental image of the sand hills and flat scrub brush country of Ward County. And Alpine has miles of shell-covered beaches. “No, really,” he said. “Check it out.”

Well, I did. The next time I traveled to that part of Texas on business, I left a day open on my calendar for a little pleasure—a visit to Monahans and  environs, with particular emphasis on looking into the county’s supposed sprawling forest. Turns out Moore wasn’t pulling my leg, but there’s more to Moore’s story than he let on.

Not many people know it, but the region does indeed have the United States’ largest concentration of a species called the Havard oak, scientifically known as Quercus havardii, and more commonly called shin oak. (The name honors American botanist Valery Havard, 1846-1927.) But don’t go envisioning
a primordial Hansel-and-Gretel-like forest in far West Texas only occasionally penetrated by shafts of sunshine. 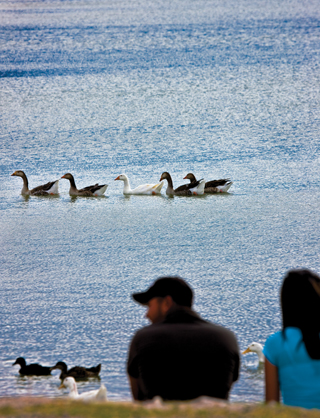 Unlikely as it may seem, given all the sand around Monahans, it even has a good fishing hole called Perch Pond. (Photo by J. Griffis Smith)

The tallest Havard oak makes it to only four feet, but even though short, it can live up to 300 years. To survive in the arid landscape of this part of Texas, it sinks its roots as deep as 70 to 90 feet in the silica dunes that give Monahans Sandhills State Park its name.

Though most visitors come to the 3,840-acre state park to play on the Sahara-like sand dunes rising as high as 70 feet, the Havard oak “forest” is readily accessible from the two-mile, paved roadway winding through the park. Though too small for climbing, swings, or tree houses, these little-known trees play a vital part in the park’s ecosystem, adding stability to the sand dunes that attract thousands of visitors annually.

The park’s interesting Dunagan Visitor Center has more information on Havard oaks and other natural features and cultural aspects that make this spot special, but what really sets the park apart is the fun you can have on sand. For $1 an hour, you can rent a person-sized plastic sand disc and some wax to make your downhill slide even faster. Though I didn’t try it, the sand surfers (kids and adults) I saw seemed to be having a great time, whooping as the discs hit full speed, and laughing if they became stuck in the sand.

Long before the park opened in 1956, the U.S. government developed an interest in Ward County that had nothing to do with its unusual flora Shortly after the outbreak of World War II, the Army chose a remote area about 15 miles from the future park site as a location for an air base. The tract lay only a mile from Pyote, a stop on the Texas and Pacific Railroad.

“[The Army] picked land near Pyote for two reasons,” says retired Monahans High School coach Ben White, chairman of the Ward County Historical Commission. “First, there was plenty of level ground, and second, with very few bad weather days, you could fly just about year round.”

Formally known as Pyote Army Airfield, but popularly known as Rattlesnake Bomber Base, the installation began training B-17 pilots and crews in January 1943. At the height of its operations, the base consisted of 300 buildings occupied by more than 6,500 officers and enlisted men. Later in the war, the base included a German prisoner of war camp. Near the end of the global conflict, Pyote Field began handling the larger B-29 Superfortresses.

After World War II ended, the field became something of an elephant burying ground as the military flew in its big bombers and other aircraft for peacetime storage. At one time, more than 2,000 “cocooned” aircraft, many of them the huge B-29s, lined the base’s runways.

When the Korean conflict broke out, the Air Force (a separate branch of the military after 1947) refitted many of Rattlesnake’s planes for further duty or
cannibalized others for parts. Following the war, the base enjoyed a brief second heyday as a giant salvage operation. Military personnel and civilian contractors disassembled World War II-era planes, kept any parts that could be reused, and melted the rest to be sold for scrap.

Little remains of Rattlesnake Bomber Base today. The former base is on land owned by the University of Texas system and is not open to the public, though the rock gate built by German POWs that once served as the base’s main entrance still stands off old US 80, just south of Interstate 20. Nearby is a Texas Historical Commission marker.

On the other side of the highway in Pyote, however, visitors can get a good feel for what the military facility was like in its salad days. The Rattlesnake Bomber Base Museum, opened in 1978 in a building moved from the former base, interprets the history of both the town and the military installation.

When I visited the museum, an assortment of framed vintage local newspapers like the long-defunct Pyote Gazette caught my eye. I loved the story from the 1920s about a crook who attempted armed robbery posing as a Texas Ranger.

You can camp at the state park, but if you like air conditioning and swimming pools, Monahans is the place to stay. There’s a newly opened chain motel on I-20 and more under construction, but Monahans has been a stopping place long before people started traveling just for the fun of it.

Before the Civil War, the storied Butterfield Line, a stagecoach route from St. Louis to San Francisco, passed through Ward County on its way to a crossing on the Pecos River, the stream that forms the county’s western boundary. In 1881 Monahans developed as a water stop along the Texas and Pacific Railroad when Chinese and Irish construction crews—laying track at the rate of two miles a day—pushed toward a meeting with the Southern Pacific line farther west.

The water that led to the development of Monahans and Pyote is not the only liquid found beneath the surface of Ward County. The discovery of oil turned Monahans, Pyote, and Wickett into boom towns in the late 1920s and early 1930s. In 1928, Shell Oil spent $250,000 to dig a giant open reservoir  expected to hold more than a million barrels of oil. The idea didn’t work, but at least Monahans gained a future tourist attraction, now called the Million
Barrel Museum. The museum grounds feature displays significant to area history, including a Missouri Pacific boxcar and Union Pacific caboose, a 1930s railroad depot building, and antique farm equipment, along with Monahans’ first jail, built in 1928, and the restored 1909 Holman House. (The tank site itself now serves as an occasional venue for special events.)

The Holman House, first known as the Monahans Hotel and originally located at the stagecoach stop downtown, sits at its fourth and likely final site at the museum complex. The dining room features a five-legged, solid walnut table believed to have once belonged to Ima Hogg, daughter of former Texas Governor James S. Hogg. In the kitchen, be sure to see a 1902 wood-burning cook stove with quite a story behind it, including a stint in a town dump.

The last Saturday of every July, Monahans celebrates its history with the Butterfield Overland Stagecoach and Wagon festival. The annual event features bull rides, a barbecue, a dance, cow patty bingo (let’s just say you don’t mark your letters on a printed card), and other events.

If you don’t happen to hit town during the festival weekend to partake of the barbecue, try the chiles rellenos or the special at Vicky’s, on Main Street. Owned by the family of Fermin Vasquez, who is apt to be sitting around picking his guitar or telling stories, the restaurant’s Tex-Mex is as good as the atmosphere. Faith Hill and Tim McGraw have dined here, as has Russell Johnson, who portrayed the professor on Gilligan’s Island.

Another popular restaurant is Spotlight, also on Main. It’s the location of Monahans’ old television station, a relic of the pre-cable era. The station began broadcasting on Channel 9 in 1958 and operated in Monahans until 1980, when it moved to Midland. Diners enjoy T-bone and chicken-fried steaks, baked salmon, and the Friday catfish buffet, surrounded by memorabilia, including old movie posters and photographs of notable stars and historic figures.

And on the other end of Main, Texas T’s provides a taste of working-class West Texas. Though most of the customers are oil-field workers, comedian Ron White has dropped by for eggs and bacon while traveling the interstate. Owner Tammi Jones says the cheeseburgers and chicken-fried steaks seem to be her regular customers’ favorites. For some tiger butter fudge or chocolate-covered cherries, or to pick up a sweet read, check out nearby Through the Pages Bookstore.

Unlikely as it may seem, given all the sand around Monahans, the town offers a good fishing hole. The city maintains a fishing lake known as Perch Pond, stocked with black bass and catfish in addition to sunfish. During the winter, the Texas Parks and Wildlife Department also stocks the small impoundment with rainbow trout. The lake record for bass is 11 pounds, and all you need to wet a line is a fishing license.

When a CNN crew visited Monahans while taking the country’s political pulse prior to the 2008 elections, the local Monahans News reported that the crew said Monahans had “the friendliest people that they had encountered on their tour across the nation.”

About the same time CNN hit town, someone from Dallas posted a series of questions about Monahans on an internet forum. The person wanted to know how many people lived in Monahans, what people do for fun there, and in general seemed to be mulling a move from Big D to sand-dune-and-Havard-oak country.

The answer he got from one Ward County woman shows that even though Monahans may be a small town, quick wit is not lacking among its residents. Responding to his query on how many people lived in Monahans, she wrote: “All of us.” (The population amounted to 6,535 at last count.) As for what to do recreationally, she said: “Sand surf.” Clearly, she just wanted to be succinct.

From the October 2009 issue