Texas Touring Musicians Share Their Travel Hacks for the Road 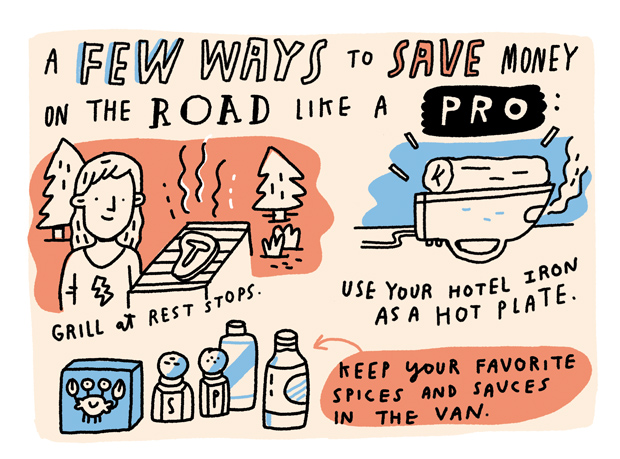 I try to think of myself as a wise and thrifty traveler. I stay in $50 motels instead of $100 ones because that means I can afford to stay out on the road twice as long. Besides, who needs all those pillows?

I know to bring a cooler to fill up with free ice in the vending area, and I know to brew both complimentary coffee packets together—regular and decaf—to make a stronger tasting cup. But I’m just Double-A. The major-league pros of maximizing the quality of a road trip with minimal financial stress are touring musicians. Their jobs are basically working vacations, and they’ve figured out not only how to extend a four-minute song into 15 minutes while playing a jam-band festival, but how to stretch a per diem like it’s taffy. Who better to turn to for tips on how to travel like a rock star on an opening act’s budget?

So, I sought out tried-and-true Texas music road warriors for pro tips that could also help those of us whose first order of business upon checking into a motel is not texting a groupie but finding an outlet next to the bed for the sleep apnea machine. Absent from the list are any tips from Texans Don Henley or Beyoncé since most of us aren’t going to need to know how to get a great Pilates workout on a private jet.

My first call was to Austin country rockers Reckless Kelly, who are the kings of “road sense” because they’ve been touring since they were knee-high to Johnny Cash (with the photos to prove it). “I never saw the rainbow, much less a pot of gold. Yeah, my first love was a wicked twisted road,” Willy Braun sings on the band’s tune “Wicked Twisted Road.”

“David Hidalgo from Los Lobos taught us how to reheat a burrito in tin foil in your hotel room,” says fiddler Cody Braun, Willy’s brother. “Most rooms have a Kleenex box and an iron for your clothes. First you remove all the Kleenex. Then, plug in the iron and place it upside down in the box: instant hot plate!”

Eating healthy is always a challenge on the road, where fast food restaurants wink at growling tummies like streetwalkers on sailor payday. For some, road trips are an excuse to eat a Big Mac combo without shame. But Austin-based blues-folk artist Guy Forsyth makes sure he won’t one day be billed as “Big” Guy Forsyth by cooking for himself and his band as often as possible. “If we have time, we grill outside at rest stops and state parks,” he says.

Along with amps, drums, and guitar cases, Forsyth’s van is also packed with spatulas, tongs, charcoal, spices, barbecue sauce, and a chimney to heat the coals without lighter fluid. “We shop at grocery stores instead of convenience stores, which also saves a lot of money,” he says.

Austin blues guitarist Jackie Venson brings a cooler on the road for a different reason. “There’s always all this extra food in the green room that they’re going to throw away anyway,” says Venson, who toured the nation with blues-rock star Gary Clark Jr. this past summer. “I just pack those munchies up.” The hotel’s breakfast buffet is also a good place to stock up. “I’m the to-go box queen,” Venson says with a laugh.

For San Marcos singer-songwriter Terri Hendrix, immersion heaters are a routine part of her traveling gear—one for the car and one for her gig bag. “I make instant coffee, heat soup, boil tea… you name it,” she says.

Some bands just want to find a restaurant with a big booth and warm food. But when you’re in a small town where “yelp” is what they do at the rodeo, you have to trust your instincts on spin-the-wheel dining. “Thai restaurants are your best bet, if you can find one,” suggests bassist Andy Maguire, a resident of Bastrop County who formerly played with the indie-rock band Spoon. “The food is consistently good and fairly inexpensive.”

Just like everybody needs to eat, everybody is eventually going to need a bathroom. When you do, make like San Antonio-based cowpunks the Hickoids and seek out banks. “They have the nicest bathrooms,” says bassist Hunter Darby. Other musicians recommend FedEx Office locations, which stay open late hours and where you can also create flyers for the next show. Anything beats convenience store bathrooms, which seem to always have a line when you’ve really got to go.

One of the hazards of touring is the threat of thieves breaking into your vehicle overnight. Vans and trailers attract crooks like fruit flies. “Try to never leave anything in your car,” advises Hendrix, whose second home has been the road for two decades. “If I have to, I throw a black tablecloth over the seats and you can’t tell anything’s in the car.” The black fabric also helps to keep things from melting in the heat.

Life on the road can make one grungy. For bands that need to hit the stage with a fresh look, there are a few tricks they use to stay clean. Reckless Kelly drummer Jay Nazz bundles his clean underwear in a rubber band, so he doesn’t mistakenly re-use dirty ones. Other musicians put their dirty clothes in Ziploc bags or the plastic laundry bags found in most hotel rooms. There’s always time for laundry.

“Pack light,” Cody Braun says. “A big bag takes up too much room, and you can only wear one pair of shoes at a time.”

With their extensive touring schedule, Reckless Kelly also signs up for various hotel rewards programs. They may come off as outlaws and rebels onstage, singing about the road that’s been their tormentor and their muse, but the band members are card-carrying members at all of the major hotel chains. It doesn’t cost anything and, Cody says, “The desk clerks are more likely to give you a little extra attention and love.”

Cramped conditions and long hours of driving can make people cranky, in both bands and families, but Cody says it’s important to maintain a good attitude. “You will always get farther with a smile than with a bark,” he says.

Nobody starts playing music to get rich. They do it for the love of it. But when the number of miles driven sometimes surpasses the number of dollars taken home, you need to know how to make the most of this life you’ve chosen. “If you are not enjoying being on the road,” Forsyth summates, “you’re doing it wrong.”