Written by Art Williams, Photographs by Erich Schlegel | From the May 2009 issue | Updated: August 4, 2020 | Filed Under: TRAVEL 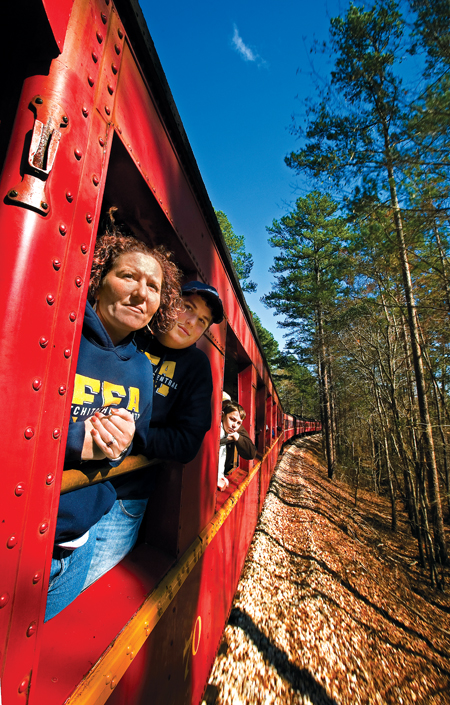 The hands of the depot clock tick toward train time. Restless, ready-to-roll passengers lean into the black wrought-iron fence that separates them from the tracks. At the first “Whoo-Whoo” of the steam whistle, all heads turn down-track to where the rails disappear into the woods. Shouts of “There’s the train!” echo across the crowd. The Texas State Railroad’s century-old steam engine No. 201 chugs into view. Its shiny black boiler and six driving wheels glisten in the sun. As the engine glides slowly into the station, a white cloud of steam swirls across parents and saucer-eyed kids eager for their first train ride. Old-timers smile knowingly as if to say, “Yes, I remember the thrill of my first train ride!”

Longtime rail enthusiast Larry Grant and his four-year-old grandson, Ethan Grant, both of Dallas, hold hands as the train shudders to a stop. Grant has passed to the next generation
his lifelong love of railroading. One of Ethan’s
first words, in fact, was “train.”

In the 1940s and 1950s, a young Larry Grant rode steam trains each summer from his Missouri home to New Orleans to visit his grandmother. Hopping aboard a historic train today—grandson in tow—rekindles fond memories. “Hearing the steam whistle and the clickety-clack down the track takes me back to my childhood,” says Grant. “Sharing this experience with the grandkids means the world to me!’

A ride on the Texas State Railroad has been a nostalgic staple for East Texas travelers since the first “All Aboard!” some 30 years ago. Recently, that 25-mile ramble between Rusk and Palestine almost ran out of steam.

Texas’ only state railroad began in the late 1800s as a short-haul line serving state prison foundries in Rusk. In 1909 the line extended to Palestine to profit from freight and passenger service. The prison closed in 1917, and profits proved elusive. Twice, the state considered abandoning its little railroad. Instead, the Legislature fixed up the tracks in the mid-1970s, acquired vintage rolling stock, and inaugurated a tourist train operated by the Texas Parks and Wildlife Department.

Two years ago, Parks and Wildlife announced that, without new funding, the official railroad of Texas would come to a screeching halt. A save-the-train campaign highballed into action, stoked by tourism promoters in Rusk and Palestine. The Legislature created the Texas State Railroad Authority, which picked a new operator, American Heritage Railways, to keep the train on track. The company (which runs historic trains in Colorado and North Carolina) took the throttle on September 1, 2007, and, if successful, will own the railroad (excluding tracks and right-of-way) by 2015.

The backbone of the new Texas State Railroad remains the traditional ride from Victorian-style depots in Rusk and Palestine. The Piney Woods excursion makes roundtrip and shorter runs pulled by steam engine #201, a restored 1901 Texas & Pacific locomotive, and by two diesel engines from the 1940s and 1950s. Once restored, the railroad’s three other steamers will return to service, including the popular Engine #300, which will ride the rails again this fall.

Riders board red-and-black passenger cars from the 1920s—open-air and climate-controlled—then settle into padded bench seats for a 20-mile-per-hour scenic excursion past brambly bottomlands, piney uplands, and verdant pastures. In spring, nature’s colors awaken across the landscape, especially in white blossoms of dogwoods and purple-pink flowers of redbuds. When summer arrives, myriad shades of green hug close to the line, sometimes in a canopy of pines rising above several dozen species of deciduous trees. In autumn, a Technicolor world unfolds before your eyes, as the rich purple-reds of sweetgums and maples compete with the blazing yellow-golds of oaks and elms. And winter transforms the sleeping scenery with bare-branched trees silhouetted against a clear blue sky.

The line spans 24 bridges, the longest being the 1,042-foot-long Neches River bridge. The concrete structure rises 35 feet over the site of an early ferry crossing. The only community on the line is Maydelle, named for the daughter of Texas Governor Thomas Mitchell Campbell, who extended the line to Palestine. Some excursions stop at Maydelle, where an 1890s turntable rotates the engine for the return trip.

Maydelle also boasts a rail station (housing the train’s “maintenance of way” office), originally built for the 1982 TV movie The Long Summer of George Adams. The movie is one of more than two dozen Hollywood films, documentaries, and commercials that have used the train.

These days, the train borrows from Hollywood by putting the magic of TV and cinema onboard in imaginative new ways, including special excursions with themes from the Lone Ranger to The Polar Express.

“We’re in business to preserve history,” explains American Heritage Railways owner Al Harper. “But to build a new generation of riders, we have to make the experience so entertaining and educational that youngsters and parents say, ‘Wow, that was fun. Let’s do it again!'”