A day at Marburger Farm Antique Show in Round Top 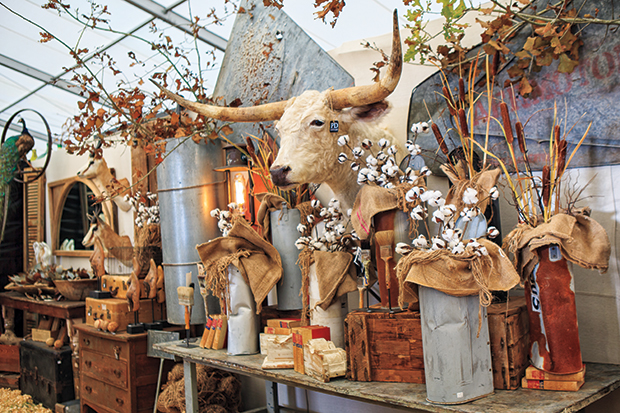 Mention to friends that you’re going to Round Top Antiques Week and you’re likely to hear, “Ooh … ” or “Ugh … ,” depending on their interest in shopping for one-of-a-kind finds.

Find tips on shopping and planning your Marburger Farm visit.

Having downsized from a house to a condo, I don’t need more stuff. But I’ve never been to this mega-market of all things antique, vintage, repurposed, or in need of repurposing. Devotees of antiques and home designers from across the nation, as well as countries far-flung as Australia and Japan, flock to the tiny town of Round Top for 16 days each spring and fall to peruse goods from thousands of vendors at one of the largest antiques shows in the United States. Since its humble beginnings almost 50 years ago near the blinking light at Round Top’s Henkel Square, the event has overtaken not only Round Top but nearby towns, such as Carmine and Burton to the north, and Warrenton and La Grange to the south.

Among Antiques Week’s myriad draws, Round Top’s Marburger Farm Antique Show is the largest, covering 43 acres with 12 historic buildings and nine tents filled with high-quality antiques and vintage fare artfully arranged in boutique-worthy booths. The show celebrates 20 years this spring, and after chatting with my friend Mirt, who’s a longtime Antiques Week fan and is particularly fond of Marburger Farm for its dazzling displays, I drove out to Round Top.

I set out from my home in Austin before dawn to meet Mirt at Marburger Farm for opening day. Hours before the booths open for early buying, shoppers in their vehicles line up at the entrance to get in for a first peek into the tents and plan their buying strategies. A few miles down the road in Warrenton, I notice sprawling fields of vendors’ tents on both sides of the road. I brace myself for the impending shopping tsunami, and I’m thankful that I’m wearing comfortable boots.

We walk over to Two Sparrows Roasting Co. for a shot of caffeine. As we sip our coffee, we stroll through the pastoral site, taking in the picturesque historic buildings, and we peer into a partially enclosed tent.

In a display clad in light, neutral tones, atop puffy linen pillows on a bed with a whitewashed cast-iron headboard, another pillow wrapped with two beige strips forms a cross. The setting transports me to World War I-era episodes of Downton Abbey. One distinction that sets Marburger apart from other Antiques Week venues is the eye-catching, showroom-like presentation of the booths.

We chat with a few dealers as they add finishing touches to their spaces. Melissa Vasquez, owner of Two Sisters Antiques in El Campo, has been selling at Marburger since the show’s early days and has seen its evolution from showcasing a handful of dealers to more than 350 offering items from across the globe. At Melissa’s booth, I stop to gaze at a 19th-Century French roulette wheel ringed with dice-patterned squares. Although I’m more interested in midcentury modern, this fanciful object fascinates me. 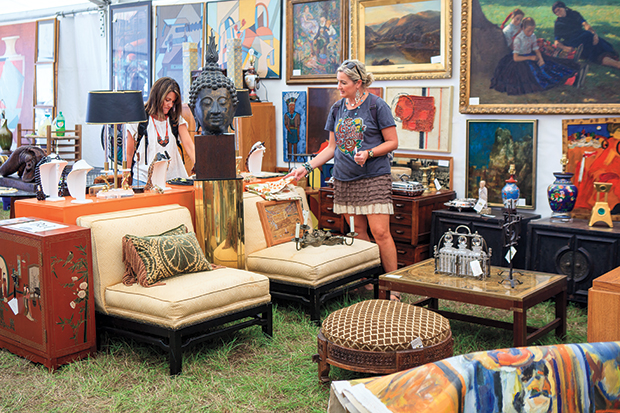 A diverse mix of furniture styles and eras can be found at Marburger Farm, often combined to create a distinctive look.

Mirt introduces me to Donald King Cowan, an antiques appraiser from Dallas and Marburger’s own “Authenticity Advisor,” who helps dealers verify the age of their wares.

Using an Early American cabinet as an example, he describes what he looks for: “Here, we see circular sawmarks that were in common use by 1830. And we look at these square nails, generally used from 1790 to 1890. Then around 1890, what we think of as a nail comes into use. When we look at all of this, we can tell by these clues when the piece was made. But when older nails get replaced with newer ones, you gotta back up and take another look.”

Don wishes us “a good wander,” and soon we hear the clanging of the opening day bell from the show office. Throngs of eager shoppers rush into their favorite tents and buildings. I pick up a copy of the Marburger guide The Howdy at the show office, which includes maps and lists of dealers.

In one of the first tents I visit, items ranging from a 1950s chrome-and-Formica dinette set and colorful outboard motors from the ’60s pique my interest. Then I spot a repurposed side table with a round metal top and a curvy base resembling a modern-art sculpture, priced at $225. Not bad, I think.

I find the dealer, who tells me the table base is an old 60-pound ship weight. He offers to reduce the price and says that I can drive my vehicle up to his booth to pick it up later. But I still have at least seven more tents to explore!
I decline, knowing I might regret it. Throughout my wander, I see a surrealistic smorgasbord of stuff, such as abstract paintings created by an itinerant oilfield worker 50 years ago, a lounge chair upholstered in fluffy vicuña with elk antler legs, and a seven-foot, bottle-shaped 18th-Century English wine cabinet.

Dealers are delighted to share stories about their pieces. At Found Images, I admire vivid postcards from the 1940s and ’50s printed onto vintage lampshades. Overall, the dealers seem more like guardians than sellers as they speak in earnest about their items, and even refer me to other Antiques Week venues selling similar work.

Excited shoppers around me are asking, “When is Joanna Gaines coming?” referring to the better half of HGTV’s Fixer Upper, the popular home renovation series filmed in Waco. The Gaineses, as well as Matthew McConaughey and his wife, Camilia Alves, come here frequently. Although Marburger has a heliport on-site, those who use it tend to be less well-known.

Among the French country antique armoires and gilded chandeliers costing thousands, I discover a midcentury burled-walnut desk that’s comparable in price to a brand-new, mass-produced version. And this desk comes with a history—when it was made, how many people owned it, and where they were from. These are the attributes cherished by those who value the quality of time-honored goods.

According to Marburger CEO Ashley Ferguson, “We strive for an eclectic group of dealers, with items from the highly affordable to the high end. It’s really important to us that anybody who comes through these gates can find something. That’s our goal—we want everyone to have a good experience.”

The playful pairings of old-world antiques next to retro-modern pieces are works of art themselves. Mirt says wandering through the booths at Marburger gives her a feeling of serenity. Her remark reminds me of the line from the film Breakfast at Tiffany’s, what Holly Golightly said about the famed jewelry store: “… nothing very bad could happen to you there.”