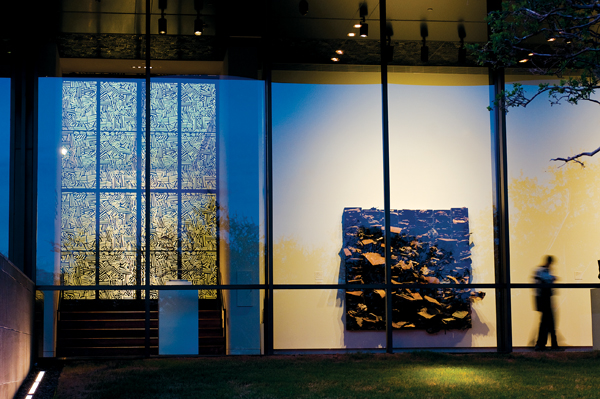 In South Texas, even certain temperate days in February lend themselves to picnics. Here’s a suggestion: Pack a light lunch (oranges are in season now; just add some bread and Texas goat cheese) and head for the stunning grounds of San Antonio’s McNay Art Museum, where the new Jane and Arthur Stieren Center has doubled exhibition space and added a certain modern note to the Mediterranean-style ambiance. But don’t forget to go inside: From February 11 through May 17, the museum hosts American Concepts and Global Visions: Selections from the AT & T Collection, a broad, two-part survey of 20th- and 21st-Century American art and photography (an eclectic collection normally housed in the company’s offices). Contemporary Paintings and Sculpture examines the major genres of modern art, while Masterworks of Photography explores the boundaries of the medium with images by the likes of Ansel Adams, Walker Evans, Man Ray, Barbara Kruger, and Andy Warhol. And if you’re on a budget, well, aren’t we all? Visit the McNay on Thursday evenings and the first Sunday of the month, when admission is free.

One of the longtime anchors of Dallas’ vibrant Arts District, the Dallas Museum of Art celebrates the 18th season of its popular Arts & Letters Live literary series in 2009. The program kicks off January 16 and continues through June 23, with dozens of appearances by regional, national, and international writers, often in combination with gallery tours, commissions of new work, and presentations of music and film. Performers and authors this year include Eat, Pray, Love author Elizabeth Gilbert; writer Wally Lamb (whose debut novel She’s Come Undone inspired The New York Times to call him a “modern-day Dostoevsky with a pop sensibility”; satirist David Sedaris (whom the DMA calls “the closest thing the literary world has to a rock star”); and Fulbright fellow Dr. Zahi Hawass, whose lecture Mysteries of Tutankhamun Revealed will shed light on the DMA’s blockbuster exhibition Tutankhamun and the Golden Age of the Pharaohs (at the museum through May 17). New this year: You’ll be able to download audio podcasts of selected Arts & Letters Live events through the museum’s new Arts Network.

According to Greek mythology, beautiful Boeotian hero Narcissus was so captivated with his reflection in a limpid pool that he perished of thirst at water’s edge, and a narcissus—the botanic name for the hardy daffodil—grew in his place.

You might understand Narcissus’ fascination with beauty upon visiting Gladewater this February, when the Mrs. Lee Daffodil Gardens burst into bloom. Especially lovely after a long gray winter, the 20-acre sea of gold flowers originated in 1960, when Helen Lee, the wife of a wealthy oil baron and developer, brought a railroad car of bulbs to Gladewater and planted them around a small lake on their property. As bulbs and grand ideas often do, Mrs. Lee’s daffodils multiplied. The flowers bloom on their own schedule, of course, but visitors can usually see the display from mid-February through mid-March.

When you’re watching the bottom line, whether it’s cash, time, or calories, you want to spend it on The Good Stuff. You know: Indulge in foods that by virtue of their deliciousness dodge regret. A nutty coffeecake at McKay’s Bakery in Abilene passed this litmus test recently, as did a delectable flight of Spanish wines at Austin’s new Uncorked Tasting Room. But the following two spots win extra points for inventiveness. They’re also perfect date-destinations for Valentine’s Day.

Pastry-chef-turned-cookie-maestro Mark Chapman used to make elegant desserts for Austin’s historic Driskill Hotel. Now, at Cookie Lounge in Austin, he focuses on the lunchbox classic, elevating simple to sublime. Ever had a made-to-order cookie? Choose your dough from nine varieties, and select from a batch of gourmet “mix-ins” that includes sea-salted peanuts and candied serrano peppers. But don’t count on the chef to offer combo suggestions, as he’s fickle: “One day I’m into the Toasted Peanut Butter dough with butterscotch and English toffee,” says Chapman. “And the next day I’m loving Dottie’s Oatmeal dough with salted cashews, milk chocolate, and sundried cherries.” See www.austincookielounge.com.

“When I was a kid, I didn’t like candy,” says chocolatier Don Burke of Houston’s RainDrop Chocolate. “I thought it tasted too sweet. But then I took a trip to Mexico, where I tasted chocolate flavored with cinnamon and pepper. That experience changed me.”

A high-tech career later took him around the world, where he sampled chocolates accented with herbs, spices, nuts, teas, and liquors. And when he gave up the microchip for the chocolate chip a few years ago, those unusual flavor combinations became his hallmark. Today, visitors to RainDrop Chocolate can enjoy made-from-scratch gelato and bakery items, but the chocolates and truffles—in flavors like curry and star anise—truly shine.  “One of my current favorite combinations is dark chocolate and lavender,” says Burke. “It’s a rich flavor that is at the same time delicate and sublime.” See www.raindropchocolate.com.

The last weekend of February promises to be a great time to visit the Alamo. On Friday evening, Feb. 27, the Daughters of the Republic of Texas (DRT) will present To the People of Texas & All Americans in the World: The Alamo Under Siege, a program in which reenactors depict scenes from the epic, 13-day battle of the Texas Revolution. Vignettes from the program include Colonel James C. Neill’s departure from the Alamo to gather supplies and reinforcements; Santa Anna’s unexpected arrival in San Antonio and the resulting confusion; the plight of the defenders’ families, who were caught inside the besieged mission; and William B. Travis’ dramatic appeal for aid. Seen collectively, in this historic setting, the scenes bring history to life in a way no textbook ever could. Visit the Alamo Web site to purchase tickets (only 500 available; $9 in advance or $10 at the door), or to learn about other events the same weekend.

According to DRT President General Madge Roberts, the Alamo is again under siege—from the ravages of time and popularity. “We [the DRT] are in the midst of a capital campaign that will allow us to preserve historic buildings, do site renovation, and expand our educational facilities and programs,” she says. If you’d like to help, you can send donations to DRT, Inc. at the Alamo, P.O. Box 1401, San Antonio, TX 78295-1401.