Museums in the Lone Star State offer an incredible range of works that perplex, please, provoke, intrigue, engage, and inspire. Where to begin? We offer a quick guide.

The idea for this story sprang from an abbreviated stop I made at the National Gallery of Art in Washington, D.C. The National Gallery is an overwhelming collection of paintings, sculpture, photography and decorative arts, covering more than 1 million square feet and containing some 117,000 total works. I only had an hour: How could I give this singular American treasure the attention it deserved?

I asked a friendly docent at the entrance if the museum offered a short list of its most prized and noteworthy works—a CliffsNotes version of the gallery. She said that such a guide once existed, but had been discontinued. However, she happened to have the out-of-print edition in her attaché case, and she made me a copy. Voilà! For my compressed schedule that day, the must-see highlights were just the ticket—a stunning Vermeer here, a signature Modigliani there. Appetite whetted, curiosity engaged, I returned to savor the gallery’s vast holdings in their entirety on my next visit.

Thus, we present this glimpse of exceptional art in Texas museums. Photographer Griff Smith documents some of the most famous, most popular, and most fascinating works at eight of the state’s authoritative arbiters of art, and museum representatives explain why they find these pieces particularly inspiring or essential.

Art is life. So, live it up. As noted American painter Robert Henri once proclaimed, “Art appreciation, like love, cannot be done by proxy.” Along the way, we’re sure you’ll find favorites of your very own. 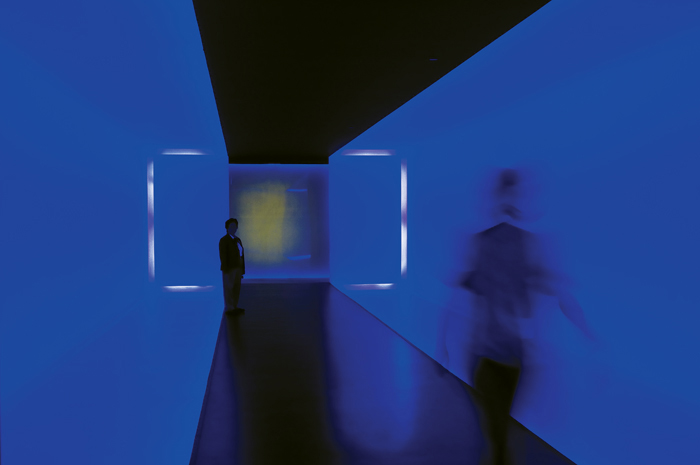 Of the myriad impressive holdings at the Museum of Fine Arts in Houston, the MFAH’s communications staff suggested three different standouts: A recent acquisition, Albert Bierstadt’s oil on canvas Indians Spear Fishing (1862); Head of Poseidon/Antigonos Doson, a Greek/Hellenistic bronze dating to 200 BC; and the permanent neon light-tunnel installation, James Turrell’s The Light Inside, connecting the two main buildings of the MFAH.

Louise Nevelson was one of America’s most prominent and innovative 20th-Century sculptors,” says Graziella Marchicelli. “The sculptures for which she is best known were made of cast off wood parts—street throwaways—transformed with monochromatic spray paint. Born in Russia, Nevelson has a special connection to Amarillo and the rest of the Texas Panhandle because of the drive of a single Texan art impresario, Dord Fitz.
“In the early 1950s,” she continues, “Fitz brought American vanguard movements and artists to the Southwest. By 1959, Fitz’ Area Arts Foundation purchased its first work of art, Nevelson’s massive wall sculpture Moon Garden. Nevelson rose to fame in 1967 with a major retrospective at the Whitney in
New York, and today her work is in important museum collections worldwide.”

Monument to the Last Horse, 1991, by Claes Oldenburg and Coosje van Bruggen, is a striking sculpture that has ties to the cavalry history of the former Fort D.A. Russell, where the Chinati Foundation is located. The work is successful on many levels, and is a great example of Donald Judd’s interest in preservation and the history of the land.”
—Ann Marie Nafziger, The Chinati Foundation, Marfa 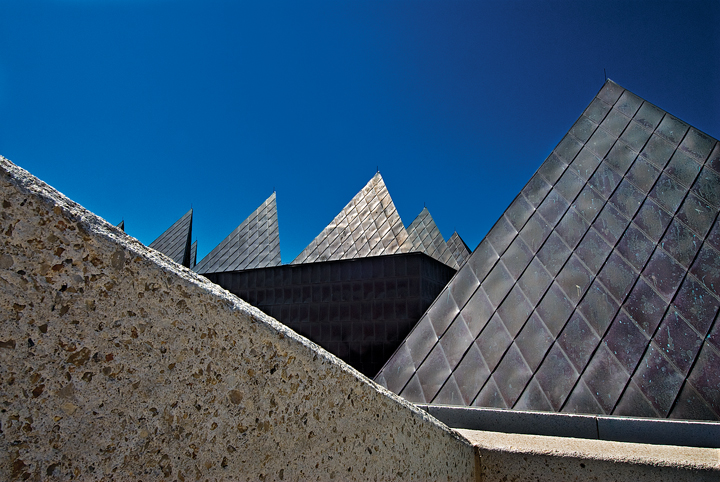 Many of Texas’ museums are known not only for their impressive contents, but also for their architecture—architect Renzo Piano’s elegant Menil Collection in Houston; Philip Johnson’s gleaming, white original, and Ricardo Legorreta’s pointedly pyramidic addition to, the Art Museum of South Texas in Corpus Christi (shown); the frontier-inspired, covered wagon/saddle-like Hardy Holzman Pfeiffer’s San Angelo Museum of Fine Arts; the terrific Fort Worth trifecta of Louis Kahn’s Kimbell Art Museum, Tadao Ando’s Modern, and Philip Johnson’s Amon Carter; and Jean Paul Viguier’s striking new Stieren Center at the McNay Art Museum in San Antonio. All of these buildings thrill in their own distinctive fashion before you even step inside.

Georgia O’Keefe’s Ranchos Church, New Mexico, is, I think, a small and exquisite masterpiece. The quality of O’Keeffe’s brushwork is what I find truly marvelous about the picture. It is evident that she  was captivated by the church’s sculptural qualities, but in the touch of her brush, she seems to be literally crafting the church itself; and in that diligent act, I sense, lies the mystery of the painting.”

Among the Kimbell Art Museum’s distinguished and widely varied collection, PR staffer Stefanie Ball Piwetz suggests that you check out Caravaggio’s The Cardsharps. This masterful Italian Baroque-era moment remains timeless. After all, more than 400 years later, we’ve got The World Series of Poker from Las Vegas on ESPN. 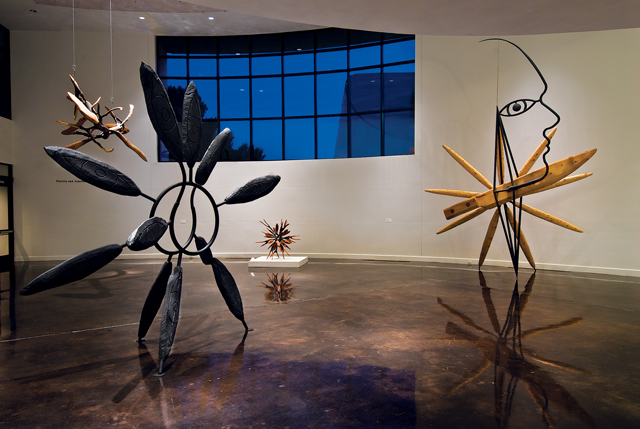 The four works of native Texan James Surls shown here cover the years 1985-1999 and demonstrate many of the dualities from which Surls’ work is best known: 2D versus 3D; abstraction versus representation; nature versus culture; and masculine versus feminine.”  —Christian Gerstheimer, Curator, El Paso Museum of Art

Modern Art Museum of Fort Worth

Roxy Paine’s Conjoined, described by the sculptor as “… nature that could potentially live forever … ,” frames a view of the stunning Modern Art Museum of Fort Worth. “The monumental sculpture Conjoined by New York artist Roxy Paine is a 40-foot-by-45-foot stainless-steel installation of two trees whose branches cantilever in space to connect in midair. Paine’s longtime interest in the juxtaposition of nature and industrialization is evident is his extensive body of work … he continues to explore the relationship of the natural to the unnatural. Through work that meshes the organic with the manufactured, Paine questions our position between the man-made world we control and nature’s world we cannot.”

The cliffs of Green River, Wyoming Territory, inspired Thomas Moran’s dramatic painting The Mirage, one of the masterworks at the Stark Museum of Art in Orange. … The Mirage, painted in 1879, presents one of Moran’s boldest and most romantic views. … he presented an idealized and glorious West, a concept that continues to affect perceptions today.