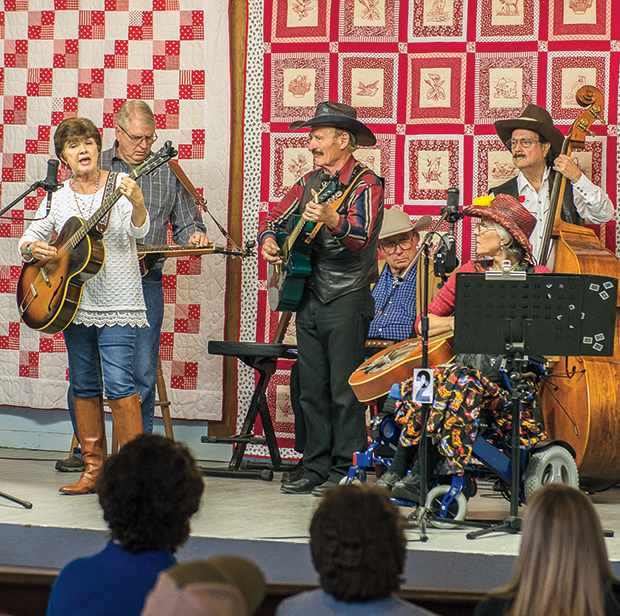 On stage, against a backdrop of quilts, the Sowell Family Pickers were playing at full throttle, their fingers and bows flying across the strings of their instruments. (Photo by Kevin Stillman)

The town of Pearl, in Coryell County in Central Texas, has an estimated population of 125, but on the first Saturday of every month it attracts nearly twice that number—and often more—thanks to the Pearl Bluegrass Jam and Stage Show. This event, which takes place at the Pearl Community Center, draws performers and listeners alike from across the state and beyond.

The Pearl Bluegrass Jam and Stage Show takes place at the Pearl Community Center, 6301 FM 183, (7 miles south of Purmela), the first Saturday of every month (except for September, when it moves to the second Saturday).

People begin arriving on Wednesday to claim the 32 RV sites located on the grounds. For the next three days, participants have open access to the center, located in a 100-year-old repurposed school building. They gather in the center’s various rooms to practice and listen to bluegrass tunes; in fair weather, they also congregate outside under the center’s mature oak and elm trees. On Saturday, day-trippers drive in for the main event—the stage show, featuring a string of bands playing 45-minute sets from about noon to 6 p.m.

As a novice banjo player, I was eager to experience the Pearl jamboree for myself, and also to introduce my teenage daughter and her best friend to bluegrass. I have long been a fan of this style of American music, which traces back to the early settlers of Appalachia and was traditionally passed down by ear. The banjo is a signature instrument of this distinct sound, but mandolins, guitars, fiddles, upright basses, and other stringed instruments are part of the mix as well. In preparation, we loaded up my banjo, my daughter’s much-neglected violin, and her friend’s newly purchased ukulele, and we hit the road.

Since I lack an RV, and the town of Pearl lacks a hotel, we checked into the Inn at Circle T just outside of Hamilton, about 30 miles to the north. This Western-themed hotel has 57 rooms, but it also has an unusual amenity: adjacent rodeo grounds with regularly scheduled public events. The entrance to the arena resembles the facade of the Alamo, and inside, visitors can fill up on chicken-fried steak, grits, fried okra, cobbler, and other down-home fare at the ringside restaurant and bar, the Crossfire Steakhouse and Cantina.

From Hamilton, we drove through juniper-covered hills to Evant, continuing on FM 183 until we reached the Pearl Community Center. RVs circled the building like a wagon train, and cars packed the parking area. Already we could hear the distant strains of bluegrass emanating from the center. The main door led us directly into the auditorium, where we were met with a full house. On stage, against a backdrop of quilts, the Sowell Family Pickers were playing at full throttle, their fingers and bows flying across the strings of their instruments. These six talented siblings out of Hempstead range in age from about 10 to 20. One of the older sisters thumped away on a double bass while her younger brother rapidly strummed a mandolin, and the other children played along on guitar, banjo, and fiddle, swapping instruments on occasion.

After the set, as the next band took the stage, we made our way through the crowd to a side door. Beyond it, a hall opened onto a warren of rooms. Four of them were devoted to jamming, and in each one, players of varying skill levels gathered to pick their way through standard bluegrass tunes such as “Will the Circle Be Unbroken” and “Blue Moon of Kentucky.” Others sat on sofas and benches against the walls, just enjoying the music. One of the back rooms had been converted into a dining hall, and volunteers served up chicken and dumplings, burgers, sandwiches, and an assortment of desserts. Hungry from the drive, we loaded up on barbecue sandwiches and buttermilk pie and found a seat in the adjoining dining space, with the riotous sounds of bluegrass filtering in from the hall.

Here we ran into Ronald Medart, the man who started it all. An alum-nus of the Pearl School, he recalled that this room had once been the study hall and the other spaces had served as classrooms. There were only eight people in his class and no incoming students when he graduated in 1955. “The next year the school closed, and the building kept going downhill,” he said.

In the 1990s, Medart spearheaded the effort to restore the building as a venue for music and social gatherings. Through local fundraising and volunteer efforts, he and other com-munity members outfitted it with a new metal roof, replaced the windows, and updated the HVAC and electrical systems. They launched the Pearl Bluegrass Jam as a nonprofit in the fall of 1997. The bands perform for free, no admission is charged, and volunteers run the show, so funds generated by the campsites and the kitchen café cover building maintenance. From the get-go, the event has exceeded his expectations. “We’re 20 miles from anywhere, but people showed up. We thought we’d get 150 people,” admitted Medart. “But the auditorium holds 300, and it’s usually stuffed full.”

After lunch, we headed back to the auditorium just in time to catch the Polk Brothers, a Wimberley-based group led by two siblings who have been playing together for six decades. Meanwhile, other musicians, professionals and amateurs alike, were honing their chops in the back rooms.

We eventually worked up the courage to join them. In the first room we ventured into, framed historical photographs of the town and its citizens lined the walls, and a case full of trophies and other school memorabilia testified to the building’s former purpose. In the midst of it all, a circle of expert pickers performed at break-neck speed, and we enjoyed watching them from the sidelines.

The next room had been entirely taken over by teenagers jamming away on their instruments, but my daughter and her friend were too shy to infiltrate their ranks. Instead, we settled into a neighboring room that seemed welcoming to beginners and began plucking our way through some basic tunes. The more experienced musicians helped us along by calling out the keys and demonstrating the chords. Even though the Pearl Community Center no longer serves as a school, it continues to be a place of learning and a place for people to come together—even if they have to drive in from other cities to get there. Pearl may be small, but it plays a big role in keeping the traditions of bluegrass alive.