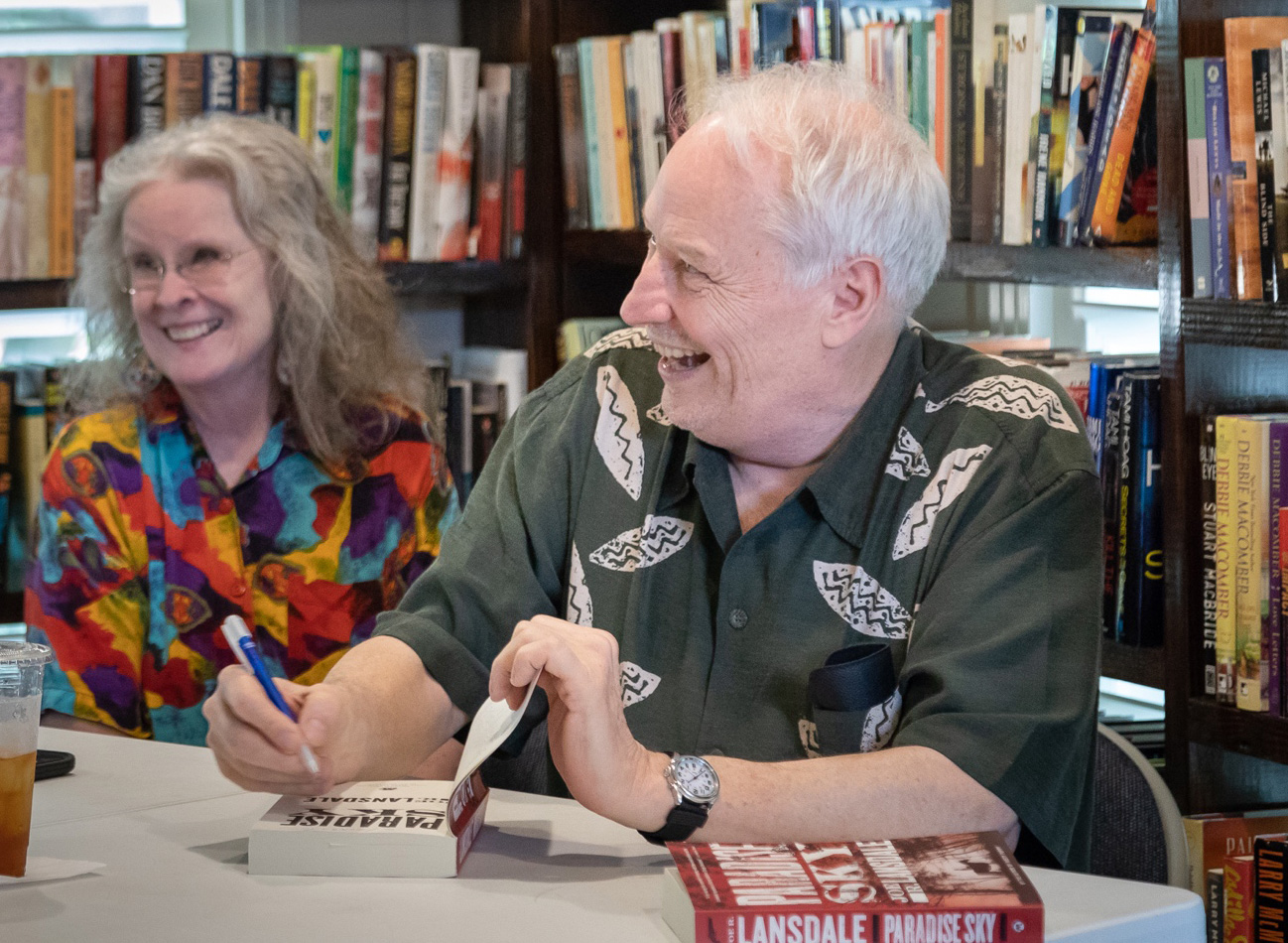 Nobody writes like Joe Lansdale, because Lansdale writes like everybody he knows is dead. Tempering his twisted imagination with a strong social conscience, the wildly inventive and rapid-firing East Texas storyteller is the author of nearly four dozen genre-defying novels and more than 400 short stories. On average, he says, it takes him just three to four months to write another book—and if he could pick up the pace, the rest of us would be obliged.

We caught up with Lansdale on May 11 in Kilgore, which is down the road from the town of Gladewater, where he grew up, and up the road from Nacogdoches, where he lives now. Lansdale was in town to promote Jackrabbit Smile, the latest installment in his popular “Hap and Leonard” book series. The Piney Woods noir thrillers follow the misadventures of an odd couple of middle-aged best friends—Leonard Pine, a gay, African American Vietnam vet; and Hap Collins, a white, straight day laborer who served prison time for refusing to fight—and the criminal mysteries they find themselves attempting to solve.

“Hap and Leonard” is also a TV show, of course. Adapted from Lansdale’s books by the SundanceTV cable network, the critically acclaimed third season ended last month. During our conversation, Lansdale, an executive producer, made the surprising announcement the network was cancelling the show. But first, he talked about the region he calls home.

You’re pretty much a lifelong East Texan. Why?
I love this region. It’s like everything else: There are negatives and there are positives, but the positives keep me here. One of the things is the geography. I like the way it looks, and I like the way it feels. It’s such an inspiration to my work, which is shadowy and wet. Geography has a lot to do with the writer and how they interpret things, and among my favorite writers, that’s definitely true. I think of James Lee Burke or even William Faulkner or Flannery O’Connor—they all had that weird, mysterious, Southern aspect which East Texas has with the shadows, the trees, the water.

There’s also a unique culture in East Texas because it’s not really a Western culture. You have some people walking around in cowboy hats and boots, but mostly you don’t. You have more of a farmer culture or a blue-collar working culture, which is what I grew up in. All of that to me is so unique that even though I can enjoy going somewhere else, and I can find things about this area that I don’t like at all, it’s home.

One of the pleasure of reading your books—for East Texans, at least—is how you sprinkle so many references to the region throughout your work, from the Tyler rose fields to your favorite Tex-Mex restaurant. To experience the Piney Woods like you do, what should we check out?
I like the small towns, but of course that’s pretty much all East Texas is. Tyler’s the big place, and it’s close to 100,000 people. When I was growing up, it was like 30,000, and it was the big place then, too. I love Nacogdoches because it’s the oldest continuous settlement in Texas. It’s got the Old Stone Fort, the university, those brick streets, and wonderful woods. I like Gladewater because it used to be the circuit for Elvis Presley and Johnny Cash— Johnny Cash wrote “I Walk the Line” in Gladewater. And we had Bob Luman and Hank Thompson and all these people who were great country rockabilly singers, like Ray Price and Jerry Lee Lewis. Growing up, I listened to all those guys, and they used to come through Gladewater and do concerts. In fact, I was in Gladewater the other day, and there was an old radio station that now has been turned into a recording studio [Mauldin Productions]. When it was a radio station, it had pictures of Elvis in there singing, and the other day they found where Jerry Lee Lewis had written his name. They had it verified by a handwriting expert. The music history in Gladewater is amazing.

It’s been almost three decades since the publication of Savage Season, the first book in the “Hap and Leonard” series. What do those guys mean to you after all these years?
Primarily I feel like Hap is some manifestation of myself. He’s not me, obviously, but he’s kind of an alternate-universe reflection of myself. I prefer this universe because I don’t get shot at or hurt. And then Leonard is a combination of several different people, and he has become really real to me. Sometimes when I see the TV show, I’m so involved with these guys and I remember, “Hey, I made these guys up.” All of those characters are just manifestations of myself or my experience or the experience of others that I’ve co-opted.

Do you love them or are you sick of them?
They’re beloved by me. One thing that helps is that I don’t just write about them. Originally, I wrote maybe six in the series, then I wrote a couple of books in between that—The Bottoms and Freezer Burn, and Fine Dark Line was in there somewhere—so the first books were continuous, and then I left them for eight years.

I’ll go to something else for a while and then come back to them eventually. I never know for sure. They’ll start talking to me. When I wrote the first one, I didn’t know it was a series. I just wrote a single book. Three years later, I kept trying to write this other book, and it was giving me trouble, and it’s because Hap was talking to me, saying “Hey, man, I got a story here, and you’re not paying attention.” And so I wrote Mucho Mojo.

What kind of trouble do Hap and Leonard get into in the newest book, Jackrabbit Smile?
Hap goes back to his old hometown because he’s been, along with Leonard, hired for the detective agency he now works for, and he’s trying to find a missing girl who is the daughter and sister of a couple of very racist, narrow-minded folks, and her father is even more fanatic. As they get into the investigation, they begin to find this mixture of people and ideas and abilities and talents, so to speak. I don’t want to give too much away, but they get mixed up with someone who thinks the town should belong entirely to white folks. And some people say, “Oh well, that’s just not possible.” Well, you need to look around a little bit harder.

What’s the latest word on the show?
Cancelled.

Really?
Yup. Most popular show on SundanceTV, cancelled. We thought Netflix might pick it up, but they didn’t—and it sells well on Netflix, too! But it’s a hard show, it’s a complicated show. I’m amazed it got put on at all. I felt very pleased to have three seasons.

Lansdale was one of Texas Highways’ Extraordinary Texans of 2016.