Goodbye to a River Turns 50 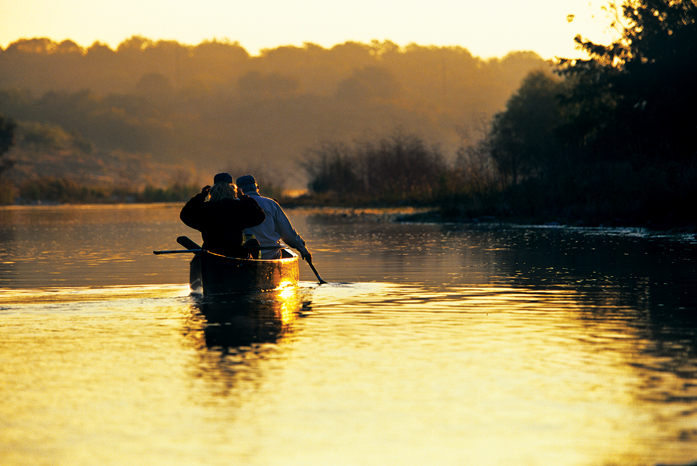 John Graves Graves and a friend traverse the Llano. (Photo by Wyman Meinzer)

With a dachshund on his lap, tarp-covered supplies at his feet, and a wooden paddle in hand, writer John Graves launched his canvas canoe from a muddy riverbank just below Possum Kingdom Lake one gray afternoon in November 1957. He wanted to connect with the primitive beauty and frontier history of the Brazos River before proposed dams downstream forever altered the river’s natural flow and surroundings. 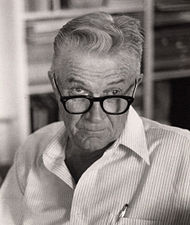 Graves, then 37 and not yet well known in literary circles, planned to produce a magazine article about his experience on the 170-mile trip. But by the time the voyage ended three weeks later near Glen Rose, Graves knew he had a book, as well. Goodbye to a River—published in October 1960, and in print ever since—endures today as a Texas classic that appeals to readers worldwide. Wistful, humorous, keenly observant and philosophical, Graves ponders past and present as he and his pup, Passenger (his real name was Watty), float the river and live off the land.

John Alexander Graves III, born August 6, 1920, in Fort Worth, often hunted with friends as a boy in nearby river bottoms of the Trinity West Fork, which was pristine and lush with native wildlife. Regular visits to his father’s family in Cuero, where he fished the Guadalupe and hunted quail with uncles, further strengthened Graves’ bond with the outdoors.

In 1942, Graves earned an English degree from Rice Institute (now Rice University) in Houston, then entered the Marine Corps and served in the Pacific. On the island of Saipan, he nearly died when a Japanese soldier, playing dead on the ground, detonated a hidden grenade. Graves recovered from his wounds (and received a Purple Heart) but lost sight in one eye.

After earning his master’s in English from Columbia University in 1948, Graves taught English for two years at the University of Texas at Austin. Restless, he freelanced in New York City, then lived abroad, mostly in Spain, where he continued to hone his writing. In 1957, he returned home to Fort Worth when his father became sick with cancer.

To justify his time on the river, Graves landed an assignment—and an advance—from Sports Illustrated. As promised, he wrote the article, but editors turned it down, twice. Despite cuts and revisions, the article still wasn’t sporty enough.

“I did get to keep the $500, which was a more significant sum back then than it is now,” Graves wrote in John Graves and the Making of Goodbye to a River, Selected Letters, 1957-1960. An article about the trip appeared in The West Texas Historical Association Yearbook (October 1958). He later sold the piece to Holiday magazine, which published the story in November 1959.

Goodbye to a River—published in October 1960, and in print ever since—endures today as a Texas classic that appeals to readers worldwide.

During production of his narrative, Graves—always a stickler for precise wording—gently insisted that the word “good-by” in the title revert to his preferred spelling, “goodbye.” “The reason I like ‘Goodbye’ is obscure,” he wrote in a letter to typographer and book designer Carl Hertzog in April 1960. “I think it has to do with the ultimate derivation from ‘God be with ye.’”

Even more relevant today, Goodbye to a River speaks to modern society’s detachment from the natural world. As he floats “his piece” of the Brazos, Graves—who learns to let go of impatience and “get slowed down”—fly-fishes for bass, listens to a Carolina wren duet with a redbird, and admires the “fine privacy” of a morning fog. “We will be nearly finished, I think,” he muses in Goodbye, “when we stop understanding the old pull toward green things and living things, toward dirt and rain and heat and what they spawn.”

In 1961, Goodbye won the Carr P. Collins Award of the Texas Institute of Letters and was nominated for a National Book Award. Many have hailed Graves as the “Texas Thoreau,” a title he respectfully declines. He doesn’t consider himself a nature writer or an environmentalist but rather “a writer who tries to put words together as well as he can, regardless of the material involved,” Graves said in an interview with Dave Hamrick for John Graves, Writer (UT Press 2007).

In his writing, Graves recalls near-forgotten stories connected to the natural landmarks he passes and explores on the river: Keechi Creek and Dalton Bend near Palo Pinto, and many others.

Today, Graves—nearly 90 and still writing—and his wife, Jane, live at Hard Scrabble, their home near Glen Rose (and the subject of his second major book, Hard Scrabble: Observations on a Patch of Land, published in 1974). One frequent visitor is longtime friend Bill Wittliff, an Austin screenwriter and co-founder of the Southwestern Writers Collection at Texas State University in San Marcos.

“John’s a treasure, our most civilized writer, our very own wise man,” Wittliff says. “He’s the one who understands how everything fits together to form the fabric of our lives and culture here in Texas. Nowhere is this more evident than in his journey that became Goodbye to a River.”