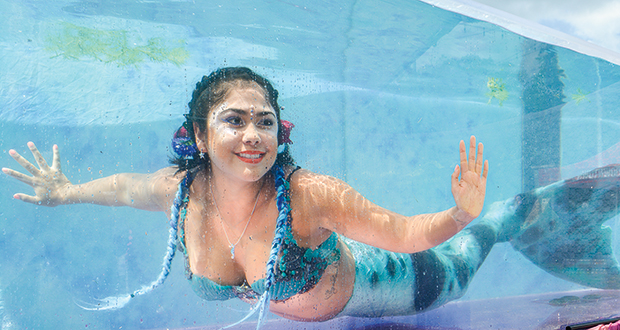 Mermaids are the stars of the Memaid Parade, which is scheduled for Sept. 16 in downtown San Marcos.

It’s not every community that can fondly recall the good ol’ days when mermaids would swim and play in the local waters, but San Marcos can. And lately, the city has been doing more than just remembering its quirky history with these aquatic maidens. There is, once again, a thriving mermaid culture throughout San Marcos because, after a bit of an absence, the mermaids have returned.

In September, San Marcos celebrates both the fairy tale history of mermaids and their modern resurgence as symbols of the city with the Mermaid SPLASH festival. With a series of family activities, social events, and educational forums on a variety of San Marcos topics, this second annual fete is as much a party for the beautiful San Marcos River as it is an affirmation of the local community and the mermaids who work to protect it.

“Mermaids are river guardians, concerned about conservation,” says July Moreno, who in January 2016 founded Mermaid Society SMTX, an organization committed to river guardianship, the arts, and local entrepreneurial spirit. “The mermaid is meant to inspire. She’s the mascot of all things San Marcos.” SPLASH stands for stewardship, preservation, local, arts, sustainability, and heritage—and the events throughout the SPLASH festival reflect those principles.

On Sept. 7, for example, Down South Word of Mouth—a storytelling group—will host a mermaid-themed family story time at Good Stuff Community Store; while on Sept. 9, local mixologists put their bar skills to the test for the Mer-Tini Shakedown, a competition to find the city’s best mermaid-inspired cocktail. Other activities include an Arts Advocate Social on Sept. 11 at Aquabrew Brewery and Beer Garden; and on Sept. 12, the River Guardianship Symposium, held at the San Marcos Activity Center.

Whether mermaid or not, San Marcos residents are immensely proud of their river, which originates in town at the spring-fed Spring Lake. The crystal-clear, 72-degree water flows gently through the city before joining the Guadalupe River en route to the Gulf Coast. During Mermaid SPLASH, local restaurant and community center Price Center and Tea Room will screen a pair of documentaries about the river’s ecology—1983’s River of Innocence (Sept. 7) and 2014’s Yakona (Sept. 14). While both films detail the river’s long history, their gorgeous underwater footage also reflects how the river has changed and stayed the same over these last three decades.

So how did mermaids get to San Marcos in the first place? Some attribute their enduring presence to the
mythology of the native river-dwelling inhabitants, dating to prehistorical times. But the real reason is much more recent. From the 1950s to the 1990s, San Marcos was home to Aquarena Springs, one of Texas’ most popular theme parks. Located in Spring Lake at the headwaters of the river, Aquarena Springs’ attractions included a submerged theater where the “aquamaids” (mermaids, some with tails, some without) performed graceful underwater dances and other playful antics. Though the theme park is long gone and Texas State University now operates Spring Lake as a research and educational center, memories of the park and its mermaids live on.

“I really wanted to be one of those mermaids,” admits Moreno, who learned how to swim in the San Marcos River. However, over time, Moreno says she’s come to see mermaids as more than just beach babes—she’s much more interested in tapping their empowering aspects to inspire. “She is a goddess,” Moreno says. “And so I had this idea—and it was crazy—that somehow we’re going to bring the mermaid back. And I believe this Mermaid Society could anchor our community in a beautiful way.”

The Mermaid Parade drew about 3,000 spectators last year for its winding path through downtown. An armada of floats carried the mermaids, including some former aquamaids. With long flowing hair the color of Easter eggs and bikini tops and tails fashioned with a rainbow of sparkling stones and twinkling sequins, the mermaids waved to squealing children on the sidewalks. Marching bands, a fire truck, and, for some reason, more than a few pirates and zombies rounded out the procession. After the parade, many of the parade-goers made their way to Aqua Faire, the society’s art and music festival held near the riverbank the same day.

Local artists and merchants have long had an affinity for featuring mermaids in their galleries and shops. And last year a new Keep San Marcos Beautiful mural was painted downtown that prominently features a swimming mermaid. For any visitor who still needs convincing that there is a very active mermaid movement in San Marcos, the city also features 10 mermaid sculptures placed around town. (At press time, the sculptures were scheduled to be installed in July.) Commissioned by the San Marcos Arts Commission, each 7-foot, 150-pound fiberglass form was cast from the same mold before 10 local artists decorated each statue with original designs.

Moreno believes these permanent mermaid sculptures will add offbeat appeal to the festivities. And she’s happy for the sculptures to serve as reminders of the importance of the Mermaid Society’s mission. “We see magic in the river,” she says. “We have this river in our backyard, and we see a need to protect it and educate more people about how special it is.”