The National Cowboy Symposium and Celebration in Lubbock

Written by: by Melissa Corbin
Photos by: Julia Robinson

Written by Melissa Corbin, Photographs by Julia Robinson | From the August 2017 issue | Updated: September 28, 2018 | Filed Under: CultureEatEventsFamily TravelHistorymade in texas

More than a dozen modern-day chuckwagons pay tribute to the rolling kitchens of the cattle-drive era.

As a Tennessee native who married a Texan, I’ve long been fascinated with the difference between the two states’ geography and culture—especially when it comes to the romantic ideal of the cowboy in the Texas Panhandle.

The National Cowboy Symposium and Celebration takes place annually in September at the Lubbock Memorial Civic Center. For information about tickets and a calendar of events, see cowboy.org.

For information about the National Ranching Heritage Center at Texas Tech University in Lubbock, see www.depts.ttu.edu/nrhc.

Long before the advent of food trucks, chuckwagons were a hardworking cowboy’s saving grace during cross-country cattle drives. Cattleman Charles Goodnight is credited with inventing the chuckwagon in 1866, when he and partner Oliver Loving prepared to drive 2,000 Longhorn cattle from Texas to northern markets. Starting with a Studebaker military wagon, whose steel axels could survive the rocky trails, Goodnight outfitted the back with a hinged workspace for food preparation and boxes with drawers for food, supplies, and utensils. Because cowboys called their meals “chuck,” the wagon became known as a chuckwagon.

The chuckwagon caught on with other cattle drovers, and in 1884, Studebaker began marketing its “Round Up” model to ranchers based on Goodnight’s original design. But the chuckwagon’s heyday was short; with the railroad boom of the late 1880s, cattle drives soon became obsolete. Yet they’re an enduring symbol of the American West, and in 2005, Governor Rick Perry signed a resolution declaring the chuckwagon the official vehicle of Texas, ensuring its legacy for future generations.

In the High Plains around the Lubbock area, it seems plenty of mamas saw fit to let their babies grow up to be cowboys. “Texas cowboys pride themselves on looking like what they think a cowboy should be, and you’ll see this out on the ranch. You can look at ’em and spot ’em and tell they’re working cowboys,” says Scott White, director of collections, exhibits, and research at Texas Tech University’s National Ranching Heritage Center. This 27.5-acre Lubbock museum and historical park offers visitors an opportunity to explore the history of ranching, pioneer life, and the development of the livestock industry in North America. It’s also the original site of the National Cowboy Symposium and Celebration, which celebrates its 29th year Sept. 8-10 and has grown so large it now fills the Lubbock Memorial Civic Center. Here, my notions of Hollywood-born cowboy grandeur would be tested. I’d learn that the cowboy way is much more than Stetsons and spurs. It’s a lifestyle. It’s a culture. It’s a tradition.

You, too, can immerse yourself in cowboy culture at this extravaganza, which is made possible by a legion of volunteers and tireless work by Executive Director Monica Hightower, who says with a smile, “Everyone is welcome, from urbanites to real cowboys.”

Supported by Western lifestyle brands such as Wrangler and Lodge Cast Iron, this is a full weekend peppered with history presentations, horse-training demonstrations, panels of Western authors, food, music, poetry, and storytelling. There are headliners like award-winning Western singer Mary Kaye. The exhibit hall boasts an array of Western products, including custom-blended coffee by Arizona-based Arbuckle’s Coffee Roaster, which pays tribute to the era when Arbuckle’s was synonymous with coffee on the open range. All throughout the Civic Center, the celebration resonates as artists pay homage to the American cowboy—the figure described by cowboy poet Jay Snider as “the greatest superhero of all time.” 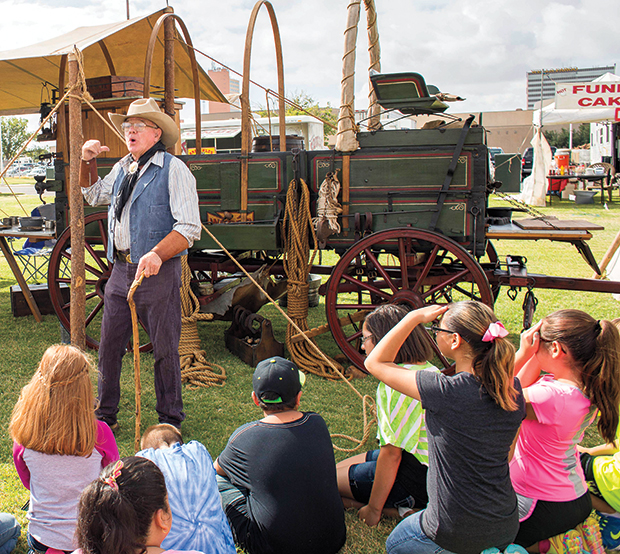 A broad array of Western traditions draw visitors to the event.

Other vibrant components of the weekend include the demonstrations of Native American skills and traditions. The Quanah Parker Society, named for the great Comanche chief Quanah Parker, educates attendees about Native American music, dance, and dress. Just as the society prepares to honor the event’s founder, Alvin G. Davis, in ceremony, I am entranced by a flute’s musings accompanied by the sweet aroma of burning cedar. “Cedar is used by a lot of different tribes. We use it as healing and to comfort,” explains Don Parker, Quanah Parker’s great-grandson. He smiles and says, “This is home for us and always has been.” Scott White explains that Quanah helped his nation adapt to the white man’s world while advocating for the tribe’s education, health, and economy. Events like the National Cowboy Symposium and Celebration help guarantee that the legacy of the Comanches and other tribes won’t be forgotten.

Where there are cowboys and their counterparts, you’ll also find horses. On Saturday morning, the annual Parade of the Horses travels through town and proceeds to the Civic Center’s northern side. Here, the enticing aromas of food cooking over open flame can mean only one thing: It’s chuckwagon cook-off time!

On average, between 10 and 15 chuckwagon teams compete for cash, prizes, and bragging rights across categories that include meat, potatoes, beans, and bread, plus awards for best ranch wagon and camp, best trail wagon and camp, and best overall cooking. Competing cooks are hard at work by 5 a.m. Saturday, stoking fires and preparing their secret recipes. “Cooking on a chuckwagon is hard work, and the National Championship Chuck Wagon Cook-Off is a highlight of the event. Cooks toil over a real wood fire to produce some of the best cowboy cuisine in the country,” Hightower says.

As the morning progresses, a crowd huddles around the camp of Granbury’s Homer Robertson, an award-winning chuckwagon cook and firefighter who has appeared on television with chefs Bobby Flay of the Food Network and Carla Hall of ABC’s The Chew. “Folks like to get a good meal and see some living history,” Robertson says as he floats a floured filet of pounded beef in a Dutch oven filled with hot cottonseed oil. A gust of wind suddenly changes his flames’ direction, and he notes, “When you’re a Texan cowboy on a High Plains chuckwagon, the one thing you have to worry about is the wind.” That’s my cue to scoot over to the C4B Chuck Wagon of Amarillo, where I’m tickled by Randy Whipple’s storytelling. He says his angel biscuits will float right off my plate, but when I ask him what his secret is for his pinto beans, he winks. “We only use 239 beans because we don’t want ’em too farty.”

Each and every cowboy has a story to tell.