Immerse yourself in the arts in this vibrant small town

“Many of the artists who live here have statewide reputations; some are nationally known.” 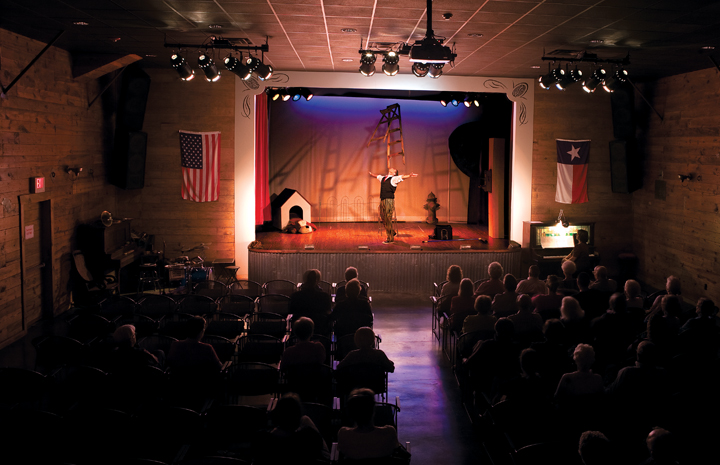 Former Ringling Bros. clown James Maltman balances a ladder on his chin during a recent performance at the Salado Silver Spur Theater. (Photo by Howard Chang)

Recently, I decided to explore the peaceful-looking village of Salado. I found its claim to fame—Best Art Town in Texas—intriguing. Was this Bell County community (population 3,600) really a bellwether of the arts?

As I drove down Main Street, admiring the historic buildings and attractive storefronts, I realized that if a scenic setting is a prerequisite for attracting artists, then Salado fills the bill, in spades. The rippling waters of Salado Creek flow through the heart of downtown, slowing the pace both literally and figuratively.

Just downstream from the Main Street Bridge sits Salado’s famous bronze of a legendary maiden-turned-mermaid, titled Sirena. Local sculptor Troy Kelley donated the work to Salado in 1989 and recently added a bronze of the magical catfish said to have changed Sirena into a mermaid forever.

At Prellop Fine Art Gallery, owner Larry Prellop gave me his take on Salado’s arts scene. “For the size of this community, we have one of the most impressive collections of artists and galleries in the state,” he said. “Many of the artists who live here-and there are a lot—have statewide reputations; some are nationally known.”

Prellop, who paints distinctly realistic seascapes and Hill Country scenes, represents more than 30 artists who work in oils, acrylics, watercolor, glass, and metal, including metal artist Charles Allen, whose “botanical sculptures”—life-size, three-dimensional depictions of flowers with minute details—caught my eye. His composition Forest Floor, which features woodland flowers and curving grasses on a driftwood base, looks as if it were indeed plucked from a forest.

At Griffith Fine Art Gallery, a brightblue building a block north, I found owner Kay Griffith painting at an easel in an alcove near the entry. The works here range from Griffith’s own brilliantly colored abstract oils and traditional landscapes to large watercolors with Western themes.

I continued my exploration across the street, at Wheeler’s Art & Antique Silver Gallery, where silver objects from the 18th and 19th centuries mingle with early Texas abstracts by such painters as Dorothy Hood and Henri Gadbois. Gallery co-owner Jack Wheeler explained that these artists represent the Texas Modernist period, from 1935 to 1965. ”Works from that period are hot with collectors right now,” he said.

At Miller Fine Art Gallery, south of the bridge, I talked to custom knife maker Charles Miller. His wife, Judy, owns the gallery, which offers paintings, bronzes, and other works, many with a Southwestern theme. Charles began crafting knives in the mid-1990s, after working 36 years as a farrier. “I grind and temper my own blades,” he said, “usually out of carbon steel because it holds its edge for a long time. I use horn, antlers, bone, and even mastodon ivory in the handles.”

A stop at Fletcher’s Books—an eclectic venue that sells rare books, antiques, architectural objects, and stained glass—suggested that Salado’s galleries don’t tell the whole story of the arts here. Owner Tyler Fletcher asked me if I’d talked to sculptor Lonnie Edwards. ”You should,” he said. “He’s one of the best artists in Salado. He’s had some major commissions, including the statue of George Hermann in front of Hermann Hospital in Houston. Stick around; he comes by for a cup of coffee every afternoon about this time. Be sure and ask him about his chicken paintings.”

Chicken paintings? Sure enough, Edwards dropped by later, and I had a chance to meet him. It turned out that he has about two dozen chickens at his studio that he likes for their striking color combinations; he has long talked of painting them someday. After a remark he made to a Temple Daily Telegram reporter last summer about being “so busy that the chickens would probably have to do the painting themselves” showed up in print, one of his longtime clients called him and said he wanted “seven of those chicken paintings?”

“So I laid out a couple of canvases, threw on some paint, and the chickens did the rest,” said Edwards. The chicken paintings have generated so much interest that the 4th Wall Gallery in Dallas plans to mount a show in early 2010.

I headed to the Salado Wine Seller to see some of the chicken paintings—colorful assemblies of lines, swirls, and dots—for myself. Owner June Ritterbusch not only sells Texas wines and offers wine tastings in the two-story, cedar-clad building, but she also displays works by local artists, many of them in the contemporary vein. Recently, she also started offering live music two weekends a month. While browsing here, I met Hershall Seals, chairman of the art department at the University of Mary Hardin-Baylor in nearby Belton.

Even my B&B had an artistic bent. Created by two artists, Johnny and Jill Shipman, Stonecreek Settlement is a collection of seven cottages constructed with recycled lumber, architectural finds, and other materials reclaimed from early Texas homes. Lantana, salvia, lavender, rosemary, and antique roses spill over the paths that meander about the property.

For dinner, I went to The Range in the 1866 Barton House. The staff obliged my request for a tasting menu, and brought multiple courses of tasty creations, each beautifully presented. As I took in the salmon-colored walls, wide moldings, and other gracious touches in the restored landmark, strains of Frank Sinatra and Della Reese contributed to a lively, festive mood.

Of the three outstanding entrees I sampled—pan-roasted tilapia filet over a wild rice timbale, marinated and grilled pork tenderloin with corn pudding, and a cold-smoked grilled filet with mustard sauce and cheddar mashed potatoes—I favored the tilapia. The nutty ftavor of the wild rice complemented the fish perfectly.

The next morning I visited with more artists. I stopped by Benton’s Fine Gold Jewelry Design, where jewelry designer Bob Hargrove explained some of the steps he uses to create rings using the lost-wax casting method. At Coyote Glass Design, Melissa Paxton and her husband, Joe Price, showed me around their rambling studio, where they create custom glass art, from tabletops to room dividers. Among their recent commissions: a stunning, curved glass bar with indirect lighting.

Creative spirit was also in abundance at Adelea’s on Main, a new bistro that offers a seasonal menu and imaginative dishes in a restored 1925 home. A glass of ginger-peach iced tea and a bowl of butternut squash soup with creme fraiche proved the perfect prelude for the house salad—mixed greens, cherry tomatoes, sugared pecans, and fresh peaches—topped with tender slices of pecan-crusted chicken.

The artful composition seemed a perfect ending for my stay in Salado.