One of the early champions of modern art, Marion Koogler McNay left behind a brick-and-mortar legacy 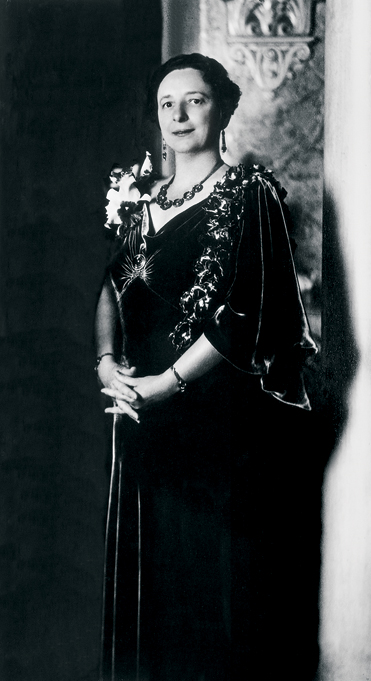 Marion Koogler McNay left her heart in San Antonio. Twice. The first time, in 1917 at Alamo Plaza, she bade farewell to her first husband, Don Denton McNay, who, by most accounts, was the love of her life. Bound for training and service in World War I, Sergeant McNay never returned, lost to the flu epidemic of 1918.

Then, upon her own death in 1950, the San Antonio art patron left her beloved Spanish Colonial Revival mansion to the organization that would become the McNay Art Museum. Her collection of more than 700 works of European and American art filled its galleries, and she endowed the museum with a family fortune reaped from the Kansas oil fields.

Born Jessie Marion Koogler in 1883 in Ohio, she grew up in El Dorado, Kansas. Jessie’s parents, Dr. Marion A. and Clara Koogler, were extremely protective of her. As McNay biographer Lois Wood Burkhalter notes in her 1968 book, Marion Koogler McNay: A Biography, 1883-1950, Jessie spent much of her childhood “reading, drawing, or daydreaming in a secret world.” A painting in the McNay Art Museum collection titled Fisherman, which Jessie created at age nine, preserves evidence of early talent.

Forbidden to attend school dances and other social activities, Jessie must have felt liberated when she left home to study fine arts at the University of Kansas in Lawrence in 1900. Though Dr. Koogler maintained that art was not a proper subject for a young lady, Jessie continued her education in 1903 at the School of the Art Institute of Chicago.

In the Windy City, now going by her middle name, Marion, the shy girl from Kansas blossomed. She feasted on Chicago’s cultural attractions and thrived on interaction with working artists and lively debate about theories of art. Her artistic horizons expanded even further in 1913, when she attended the landmark Armory Show in New York, described by Burkhalter as “the first exhibition of modern art in the United States.” The author writes that the show provided Marion’s “first comprehensive view of the art of Cezanne, Picasso, Braque, Gauguin, Pissarro, Van Gogh, Degas, and Renoir, all of whom would someday hang on her own walls, as would some of the American Independents in the exhibition, such as Marin, Prendergast, Henri, Sloan, and Weber.”

Shortly thereafter, drillers discovered oil on land Dr. Koogler had purchased in Kansas, providing a seemingly endless supply of what Marion Koogler McNay later called her “picture money.” And in 1917, 34-year-old Marion puzzled family and friends when she married railroad manager Don Denton McNay, 10 years her junior and newly enlisted as an Army sergeant. Sergeant McNay was stationed at Fort McIntosh in Laredo, and the couple lived in an adobe cottage there until McNay was ordered to Florida, in October 1918. After their final nights together at the Menger Hotel, they said goodbye on Alamo Plaza.

Romantic bliss proving elusive, Marion filled her life with friends and art. Burkhalter describes McNay’s San Antonio home, built in 1927-1929 with architects Atlee Ayres and Robert Ayres, as her “creative masterpiece.” McNay designed, applied, and assisted with many of the elaborate stencils, tiles, and other distinctive touches. She installed antique wrought-iron lamps and chandeliers. Magueys and yuccas, palms and pines, and a full range of Southwestern flora made the 23-acre grounds a garden oasis.

Soon, McNay purchased her first oil painting, Delfina Flores by Diego Rivera, and discovered the art scene in Santa Fe and Taos, spending summers there in the late ’20s and ’30s. “Even in Taos,” observed her biographer, “where individuality was rampant and unrepressed, Marion Koogler was a stunningly flamboyant figure and in such a setting could indulge her fondness for colorful costumes and dramatic hats.”

She also made friends in New Mexico’s Pueblo culture, acquiring many fine examples of Native American art, as well as Spanish Colonial and contemporary Southwestern works. A San Antonio attorney attending a traditional Pueblo dance was surprised to recognize one of the dancers as his art-loving client.

Often ill in the last years before her death from pneumonia in 1950, McNay became reclusive as she carefully planned for the future museum and helped administer the San Antonio Art Institute, which was housed in her estate’s former aviary. Her physician, Dr. Merton M. Minter, developed a unique therapy for the times when his patient was down in the dumps. He would make a negative remark about a work of art she liked, and then happily endure her spirited defense of the work.

In an interview with Lois Wood Burkhalter, former San Antonio Art Institute student Ruth Dunn offered a poetic remembrance about her benefactor: “Mrs. McNay made art appear as the highest soaring of wings.”