Cracking a smile in pecan country 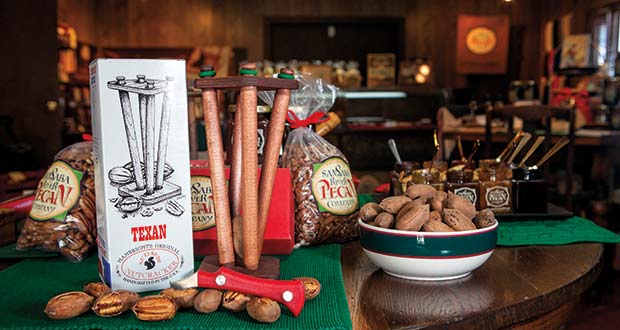 A chat with winemaker Penny Adams, plus more on Wedding Oak Winery.

Here in the Pecan Capital of the World, where four- to five-million pounds are produced every year, it’s good to know how to crack open a nut. Thankfully, at the Great San Saba River Pecan Company store, in the midst of a 7,000-tree pecan grove, I found plenty of options.

The Texan York Sheller looks like a big, red claw. Or, here’s a little aluminum squirrel that cracks the nut under its mouth when you push on its tail. Yet another cracker consists of four birch sticks that twist together, crunching the nut’s shell open. Any one of these nut-openers makes a fine souvenir to pair with all the pecans—unshelled or shelled, flavored or plain, in their natural state or baked into pies, cookies, jams, and candy—that you’ll inevitably tote home from San Saba.

If you visit San Saba River Pecan Company from November through January, you can harvest your own pecans with some elbow grease and a 15-foot cane pole. Commercially, though, huge tree-shaking machines release the nuts, which wind up in just about everything. San Saba River Pecan prides itself on preserves (especially a prize-winning peach, pecan, and amaretto version), as well as its creamy fudge, pecan pies, and a pie-in-a-jar you can make at home.

At Alamo Pecan & Coffee’s downtown store, owner Martha Leigh Whitten roasts pecans and coffee together, then grinds them to produce an aromatic, deep flavor with a nutty edge. Pair it with Alamo’s incomparable creamy praline mounded high with nuts.

Pecans in beer? It happens here. At Bar D Brewhouse, a craft brewery and restaurant with deer and antelope heads mounted on the rock walls of a former auto-parts store, I tasted a flight of 10 in-house beers as well as a root beer. Pecan Bottom Ale, a nutty blonde ale fermented with pecans, pairs well with Bar D’s Friday special: all-you-can-eat crispy, cornmeal-battered catfish filets.

To try a pecan-infused balsamic vinegar, I stopped by San Saba Olive Oil Co. on the town’s main drag, Wallace Street. Owner Jim Brozo offers tastes of dozens of extra virgin olive oils and balsamic vinegars. All of the vinegars hail from Modena, Italy—even the pecan praline flavor, although the idea was Jim’s.

“You just have to have pecans in San Saba,” Jim says.

Even though it had nothing to do with pecans, I popped across Wallace Street for a $10 tasting of five wines at Wedding Oak Winery, named for a nearby live oak that arborists have estimated is at least 400 years old; it’s a popular spot for weddings. Winemaker Penny Adams works mostly with grapes grown in the Hill Country and the High Plains. My favorite: the award-winning 2013 Albariño, dry and zingy with hints of peach and apricot. By the way, be sure to notice the gorgeous limestone buildings that dominate Wallace Street. As part of an eight-year city project, workers chipped away old mortar and siding that had once covered up these stately storefronts.

For dinner, Diggs Restaurant & Club offers tender Black Angus steaks—everything from an eight-ounce tenderloin to a 32-ounce sirloin for two—cooked over a mixture of pecan and mesquite, which imparts subtle nuttiness to the meat.

At the end of the day, I discovered pecans once again in framed photographs over my bed at the Dofflemyer Hotel, which opened in April in a 1913 former bank building at 108 S. High Street. Its six cozy, contemporary rooms boast 100-year-old pine floors, original pressed-tin ceilings, and beds dressed in top-flight linens and pinstriped blankets. Perched against my pillow sat a package of vanilla-infused crème brûlée pecans from the café and shop below, Oliver & Company, which offers pastries, cakes, and soups and sandwiches, along with nuts, nut-based candies, and homemade ice cream.

I stopped in next door at J.C. Campbell & Co. Mercantile to check out the two-story consortium of vendors selling such eclectic goods as crocheted women’s tops, chunky beaded necklaces, and honey soaps and lotions from Spiral Horn Apiary in Rochelle, 20 minutes away. And, yes, there are pecan items, including beautiful pens handcrafted from pecan wood by the late San Saba craftsman Frank Churchill. These, too, make fine souvenirs of the little town whose charm, pride, and plentiful shade render it, in a nutshell, delightful.