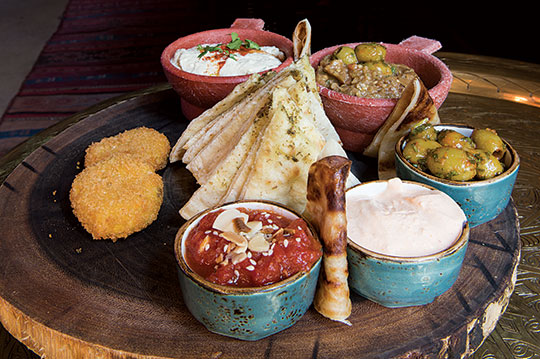 On a sunny Saturday afternoon at Trinity Groves, the spectacularly busy dining and retail development at the foot of the Margaret Hunt Hill Bridge in West Dallas, the mood is that of a holiday in the park.

Between the families sitting on decks with kids, couples on dates, young singles with leashed dogs, and most everybody sipping something cool or eating something delicious, this certainly feels like a party.

That a buzzy new quarter would replace an industrial area in the shadows just west of downtown Dallas seemed unthinkable just a few years ago. But today, Trinity Groves easily serves as impressive reassurance that the long-planned improvements along the Trinity River give Big D new sparkle.

Trinity Groves unfolds along both sides of Singleton Blvd., between Gulden Ln. and Beeville St., just west of downtown Dallas. The restaurant complex, at 3011 Gulden Ln., faces Singleton, with parking entrances
on Singleton and Gulden.

Even the entrance seems dramatic: Reaching Trinity Groves from downtown and the Design District requires traveling west beneath the magnificent soaring arch of Spanish architect Santiago Calatrava’s stunning suspension bridge. And running parallel to the Calatrava bridge, a new pedestrian park and plaza on the refurbished 1933 Continental Avenue Bridge opened in June, affording visitors a place to play bocce ball, practice yoga, run through a misting fountain, and take in a new view of the Dallas skyline.

At the heart of Trinity Groves is a vibrant, 15-acre dining complex created via the Restaurant Concept Incubator program, a groundbreaking project spearheaded by entrepreneur Phil Romano. Romano is the concept man behind such success stories as Fuddruckers, Macaroni Grill, Nick & Sam’s, and EatZi’s, and he left few details to chance.

Romano and his partners offer chef-restaurant entrepreneurs a leg-up with this innovative incubator. Here’s how it works: To win support from Romano’s team, an applicant’s concept must demonstrate a thoughtful and sustainable theme and menu, operate within a set budget, and fit into the required space at Trinity Groves. If the concept is approved, the Trinity Groves team assists with the menu, staffing, and design of the restaurant, investing as much as $500,000 in the restaurant’s finish-out and start-up costs in exchange for a 50 percent ownership. There are no guarantees, but if the concept works, it has the opportunity to grow. If it flops, another concept quickly replaces it.

The first wave of restaurants, which began in late 2012 with Babb Bros BBQ & Blues, has grown to more than a doz-en, including concepts revolving around hot dogs, baked potatoes, seafood, Spanish tapas, a cake bar, tamales, artisan chocolates, Asian street food, and craft beer. One idea has a built-in variable: a concept known as Kitchen LTO, which reinvents itself every four months with a different up-and-coming chef, interior design, and menu.

The district offers more than places to dine, though. Four Corners Brewing Company brings in the crowds for its Saturday tours, as does The Workroom and Gallery 422, a place to shop for art and custom furniture. There’s also the Little D Farmers Market, which opens three Sundays a month.

At lunch and dinner hours, naturally, the action centers on the restaurants. Almost instantly a favorite at its opening in Trinity Groves last fall, Casa Rubia brings a fresh approach to Spanish fare. Chef Omar Flores focuses much of his attention on seafood, offering a paella creation that he changes daily. Landlubbers, meanwhile, find delight in his tapas starter: corn croquettes flecked with chorizo and Manchego cheese, dipped in a charred oregano aioli. Next, an entrée plate of lamb ribs with roasted heirloom carrots and mint provides substantial comfort.

A few doors down, Resto Gastro Bistro introduces a bit of flash with sparkling chandeliers mixed with rustic woods. Innovations from the kitchen include corn dogs filled with lobster mousse and fried crab cakes with roasted baby artichokes. Nearby, a place called Souk offers Moroccan dishes such as a goat cheese cigar (a tightly wound phyllo pastry, filled with cheese and sun-dried tomato) and a Moroccan lamb sausage called marguez, served with onions, harissa, and couscous.

Another big hit, LUCK (Local Urban Craft Kitchen) specializes in a craft beer selection and foods that match well. Examples include the soft handmade pretzels with beer-cheese fondue, or an entrée dish of shrimp and stone-ground cheese grits, complete with Creole sauce, green onion, and a fried egg.

Sitting on any of these patios while gazing at the comings and goings of patrons at each adjacent bistro, it’s clear that revitalized West Dallas and the Trinity Corridor engineers hit the jackpot. Watching the party continue as Trinity Groves expands promises to be endless entertainment.