Written by Art Williams, Photographs by Will van Overbeek | From the December 2016 issue | Updated: November 13, 2016 | Filed Under: EatEat + Drink 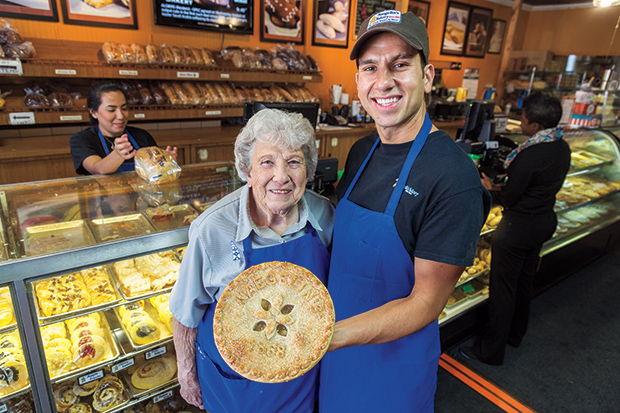 Baker Frankie Alvarado shows off a pie with employee Della Pantermuehl, who has worked at Naegelin’s for almost four decades.

I push open the weathered metal-and-glass door of Naegelin’s Bakery and immediately face a dilemma. On one side of the narrow room, bakery cases display an array of goodies—kolaches, cinnamon rolls, colorful cupcakes, candies, brownies, cakes, and pies. On the other, shelves are laden with rolls, bread, coffee cakes, gingerbread men, cookies, and bags of fresh tortillas.

The dilemma: how to choose just one thing. The solution: an entire box of assorted goodies. Obviously.

Naegelin’s Bakery, an 8,000-square-foot bakery in New Braunfels, claims to be the oldest continuously operating bakery in Texas. And while it has passed through numerous owners, it has always been a family affair. Founder Edouard Naegelin opened the bakery in 1868 on the site of what is now City Hall, and he moved it 11 years later to this tiny building just off the main plaza. Edouard and his wife, Francisca, lived in an apartment above the bakery with their children until Edouard’s death in 1923, and the business was passed down to various family members until it was sold in 1980 to entrepreneur Wilburn Granzin.

“My dad had been in baking for 20 years in San Antonio when a salesman told him that this bakery was up for sale,” Wilburn’s son Todd Granzin recalls. “Edouard Naegelin’s grandson Clinton was looking for a family to keep it going the way his did. His children weren’t interested. We came up to New Braunfels and met, and we liked him and he liked us. The rest is history.”

Todd and his brother Ross now own the bakery. The Granzins kept the Naegelins’ recipes, and they are especially proud of their famous apple strudel. “No one else makes it the way we do, the way that Mr. Naegelin did it,” Todd says. “The filling is like apple pie filling, but we add cherries and coconut, and we use a puff pastry. There’s not that much to it, but I think the atmosphere of the bakery makes it more interesting to eat.”

I bite into a piece and find layers of delicate pastry, a gooey filling, and slices of apple with just a hint of firmness. As the pastry melts in my mouth, the sweet filling sets my taste buds dancing. No wonder Naegelin’s makes more than 25,000 of these strudels a year.

The bakery also sells about 600 of its whimsical “smiley face” shortbread cookies daily, and about 30,000 gingerbread men every year—many of them around the December holidays. Other big sellers are traditional German cookies such as pfefernuesse, lebkuchen, and springerle, Todd says, as well as the bakery’s unusual interpretation of the classic bear claw.

“Most people make bear claws with a puff pastry dough and almond flavor, but ours is Danish-style dough with cinnamon and 12 layers of brown sugar and pecans in there,” Todd says.

The business also sells a variety of cream-filled pie, fruit-filled pie, and a lot of cakes, including 50 to 75 custom birthday cakes a week and at least three wedding cakes every weekend. “We do so many cakes that our decorators sometimes beg us to quit taking orders,” Todd admits. Those decorators work in their own dedicated room, where containers of colorful sprinkles, sugars, and other goodies fill a long shelf above a counter lined with cakes in varying degrees of completeness.

The Granzins have added new items to the lineup over the years, including tortillas and a sweet German pretzel made with pastry dough, brown sugar, cinnamon, and pecans.

About 35 people are employed at the bakery, although that number grows during the holidays and in summer, the bakery’s busiest times. But busy seems to describe Naegelin’s in general, both the shop, where the stream of customers flows nonstop, and the operations in back. There, in a maze of small rooms, employees work dough into a variety of shapes and sizes. Another room houses giant bags of flour and tubs of fillings, and a third is dominated by a white, 1940s-era oven the size of a panel truck. In the passageways between the rooms, bread loaves and rolls cool on racks, shelves are piled with cake pans, and carts covered in wrapped cookies and other goodies create a fragrant obstacle course. The phrase “controlled chaos” comes to mind.

And Clinton Naegelin got his wish for keeping the bakery a family business, as the Granzin brothers’ wives and kids work here, too. “It’s a real family operation, multi-generational, a bakery that has stood the test of time,” Todd says.

I can’t say the same of my box of goodies, which disappears within a day.