Hilltop fires, a shooting competition, and a German Christmas pyramid are a few customs celebrated in the Hill Country town

Written by Sarah Thurmond | Updated: May 7, 2021 | Filed Under: CultureGetawaysThings to Do 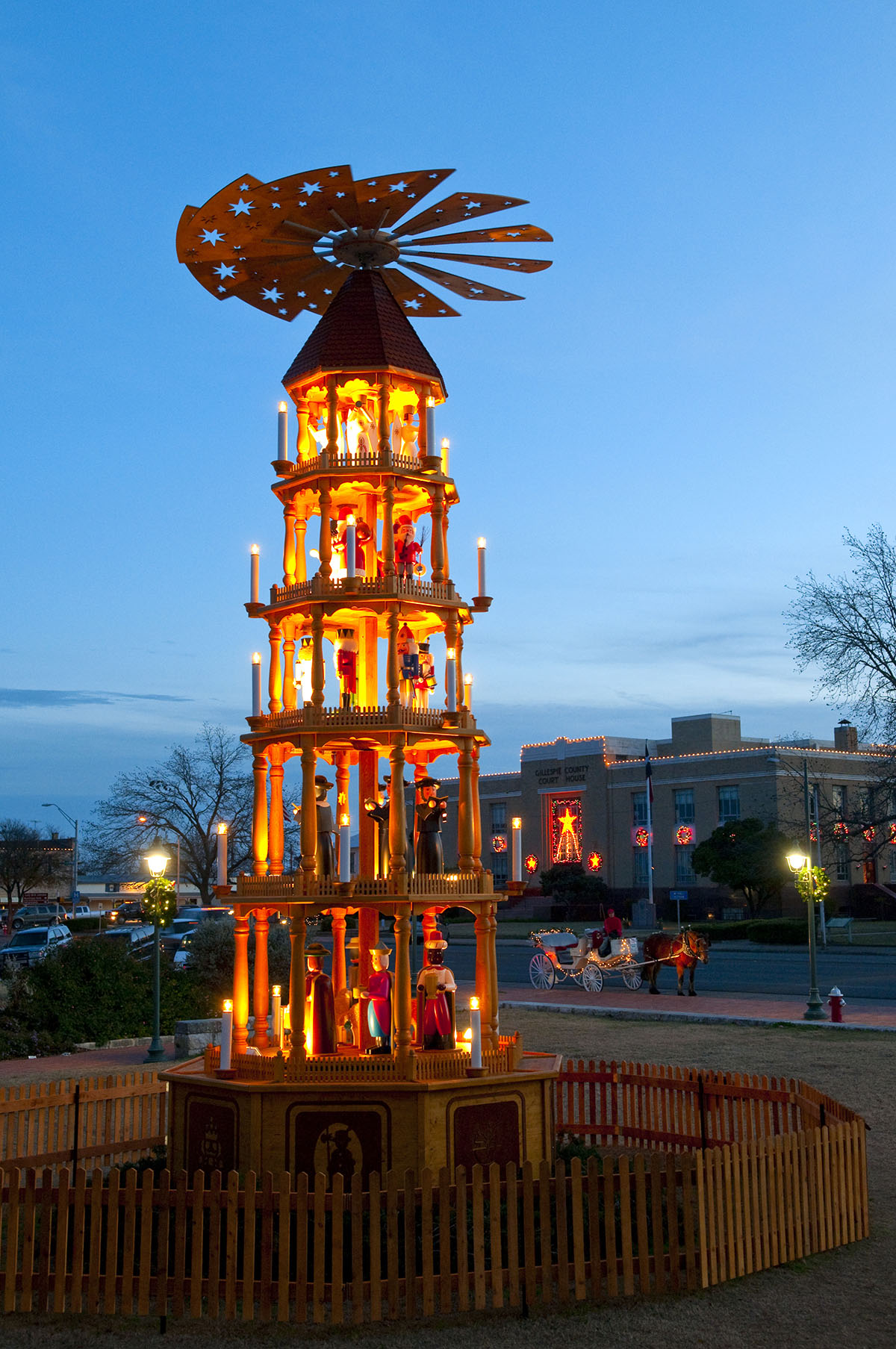 The German-made Christmas pyramid debuted in 2009 and is the centerpiece of Fredricksburg’s Main Square during the holidays. Photo by Kevin Stillman.

This month, the city of Fredericksburg kicks off its 175th anniversary with a yearlong celebration culminating next May. Anniversary aside, this Hill Country community is well accustomed to celebrating its history and heritage. Chances are, whenever you come to town, there’ll be timeless traditions to toast.

Every spring, wildflowers blanket the undulating landscape, marking the start of a new season. Much like how these flowers brighten the fields across Fredericksburg, one of the city’s oldest traditions brightens the evening skies. Every spring Saturday before Easter, the Fredericksburg Easter Fires take place with bonfires illuminating the hilltops around town. The tradition dates back to the Comanches’ lighting of signal fires at night to communicate with their chiefs while negotiating a treaty with Fredericksburg’s founder, John O. Meusebach.

Come summer, the air thickens with excitement over the peach harvest. As one of the largest peach-producing counties in the state, Gillespie County is one of the best places to buy a box of fresh peaches, hot peach cobbler, or a pint of peach ice cream. Many of the local orchards have been owned by the same family for more than 70 years. Vogel Orchard, Donald Eckhardt Orchards, and Fischer and Wieser’s Das Peach House, whose founder, J.B. Wieser, immigrated from Germany and was one of the first pioneers to bring peaches to Fredericksburg, are all worth a visit.

Fredericksburg is also home to the oldest county fair in Texas. Visiting the Gillespie County Fair, which has taken place every August since 1881 (with the exception of wartime), feels a bit like going back in time, with its tractor shows and handmade quilts, pie contests, and horse races.

The Gillespie County Bundes Schuetzenfest is another summer tradition. The 125-year-old target shooting competition brings five teams together, with the lucky winner earning the title of “Schuetzenkoenig” or “King of Marksmen” until the following year.

“The competition originally started as a way for people to improve their shooting ability and accuracy when they went hunting,” says McKenzie Moellering, the communications and digital content associate at the Fredericksburg Convention and Visitor Bureau. A Colorado expat, Moellering joined the competition after marrying her husband, whose great-great-great grandfather, Heinrich Moellering, was one of the founding members of the Bundes Schuetzenfest in the late 1880s.

Over time, she says, the event turned into a friendly competition. “It’s not so much about the competition now as it is carrying on the tradition and spending time with family and friends.” This year’s event, which is free to spectators, takes place July 31-Aug. 1 at the Tivydale Shooting Club.

As summer ends and autumn begins, the sounds of polka and oompah music signal the start of Oktoberfest. This lively fall festival, which celebrates its 40th anniversary Oct.1-3, is a sensory feast, complete with live entertainment, ice-cold German beer, and contests for yodeling and waltzing.

A lesser-known fall tradition is the town’s nearly 130-year-old Sängerfest, a showcase for the German choirs in the region. This year’s event is scheduled for Sept. 25 at St. Mary’s Holy Family Center.

When winter arrives, Fredericksburg’s holiday spirit twinkles across town. More than 50 years ago, President Lyndon B. Johnson and his wife, Lady Bird Johnson, began the LBJ Tree Lighting tradition, which continues today at the Lyndon B. Johnson State Park in nearby Stonewall. On Dec. 19, visitors can enjoy carolers, a live nativity scene, and a spectacular tree lighting as in years past.

Meanwhile in the Marktplatz downtown, a 26-foot tiered, wooden, carousel-like structure rises over Main Street. The Weihnachtspyramide, aka a German Christmas pyramid, is illuminated with candles and figurines that tell the story of Christmas. It is lit each year on the Friday evening following Thanksgiving, These holiday structures are handcrafted in Eastern Germany and date to the 16th century. Fredericksburg’s pyramid made its debut in 2009 and is the first large-scale version of its kind to come to the United States. As it flickers each year, it serves as a reminder of the German history and heritage that’s been shining in Fredericksburg for 175 years and counting.