Enjoy a saltwater weekend on the Texas coast 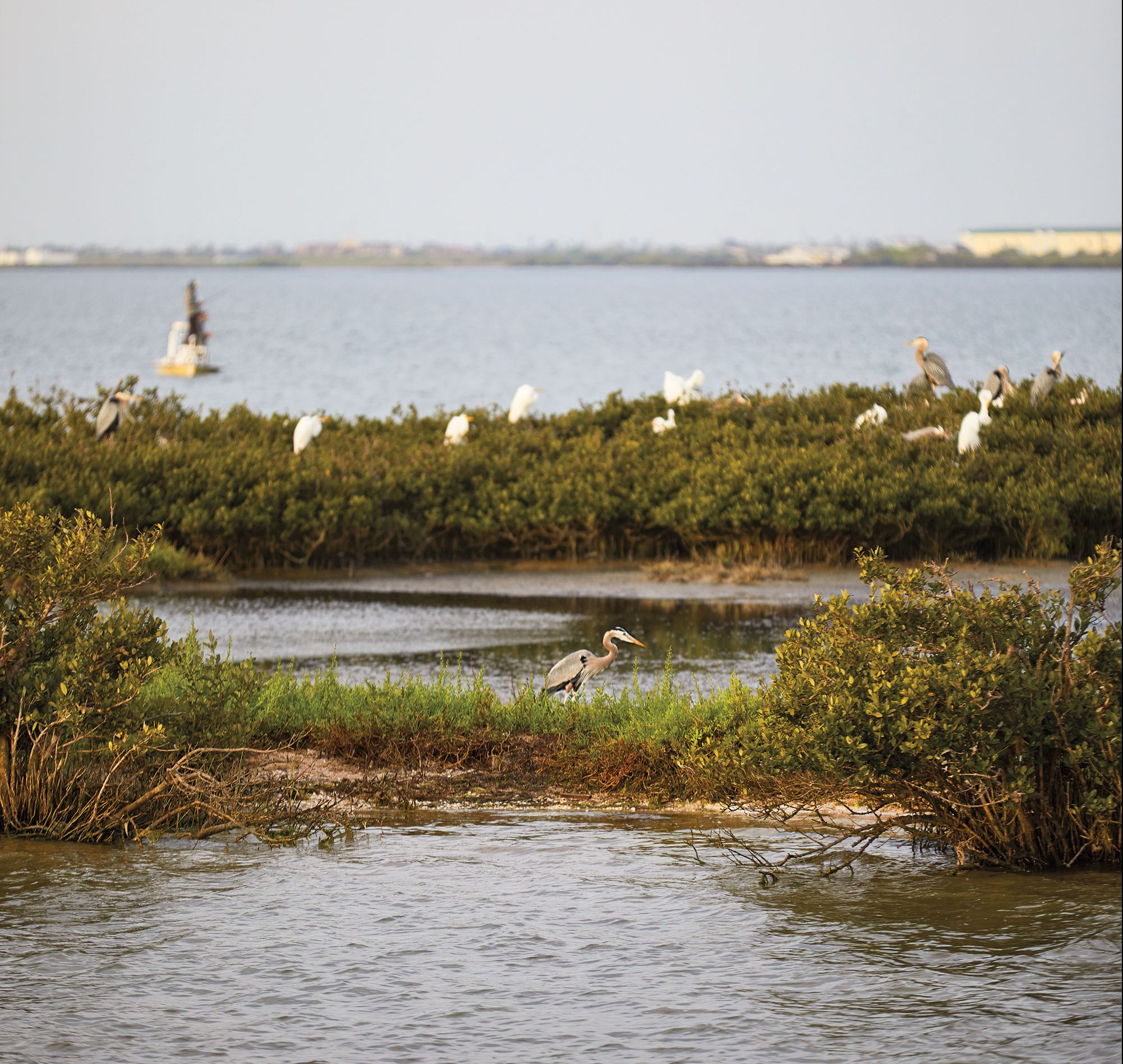 Could there be a better way to experience a town comprised of at least 70 percent saltwater than to get to the water as fast as you can? With 41 square miles of Redfish Bay inside its city limits, Aransas Pass offers just that—a self-described “Saltwater Heaven” building on its revival after Hurricane Harvey’s destruction in 2017.

Though it lacks miles of Gulf beaches and the high-rise condos found a ferry ride away in Port Aransas, Aransas Pass’ protected location behind two barrier islands provides the convenience of mainland boat launches; the serenity of paddling on Lighthouse Lakes; and encounters with bottlenose dolphins and coastal waterfowl like roseate spoonbills, American oystercatchers, and the rarer reddish egret. It features five locations on the Great Texas Coastal Birding Trail, including a pocket park across from the city library that is Texas’ largest dedicated hummingbird stopover.

Also on an Aransas Pass to-do list: dining al fresco on locally caught seafood, a tour of a military history museum, or a visit to the Seaman’s Memorial in Harbor Park—a remembrance of area residents lost at sea.

Accommodations in the city are limited to midlevel chain hotels like Fairfield and Microtel, but RV parks and rental cottages are available, upscale lodging is minutes away in Rockport, and both are easier on the pocketbook than a Port Aransas condo or beach house. 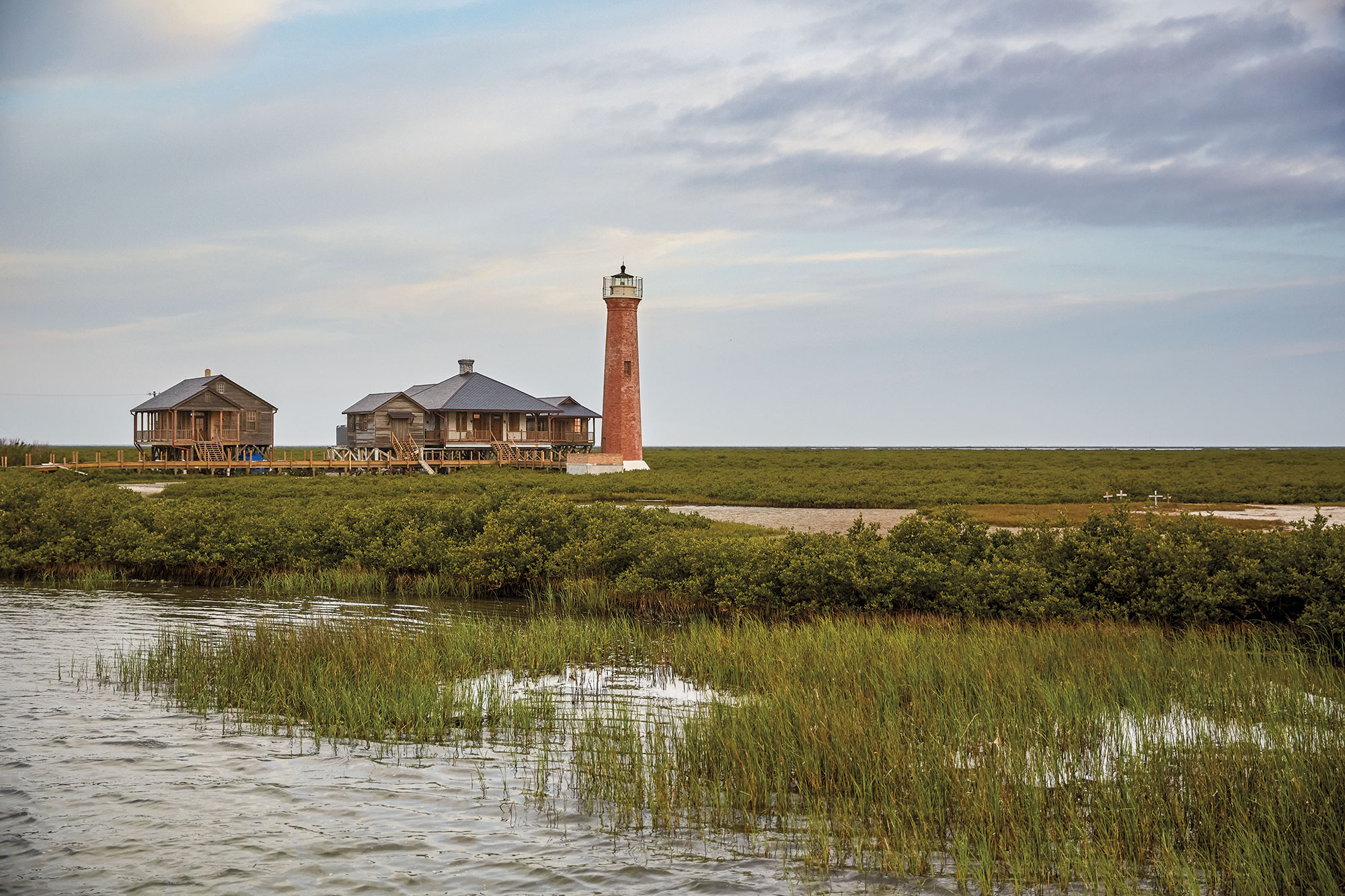 Step inside the headquarters of Slowride Guide Services, a vintage two-story frame house near downtown, where owner Dean Thomas organizes your half-day itinerary aboard his 22-foot Dargel skiff. He offers several options for a pleasant morning on the water, such as sailing past the historic 1857 Lydia Ann Lighthouse, studying wildlife in Redfish Bay’s network of estuaries, and casting from the skiff’s bow for redfish and speckled trout in the bay’s target-rich flats. His fee: $400; his delightful commentary: no extra charge.

Thomas deftly slides the Dargel out of San Patricio County’s marina, heading under the State Highway 361 causeway past repaired docks and up Aransas Channel. Today’s first sightings include a blue heron amid more common white egrets, framed by low-rising black mangrove, and an osprey with a fish in its bill.

White pelicans dominate the shoreline as the Dargel turns portside into Lydia Ann Channel, where dolphins suddenly surface. Here, Lydia Ann Lighthouse remains close and yet so far; grocery magnate Charles Butt restored it to 24-hour operation, but there’s no public access. Thomas guides the skiff into the lighthouse’s “driveway,” as he calls it, a dead-end slough for close-up viewing.

Harbor Island’s Quarantine Shore is next. Brown pelicans claim this historical strand, so named for being an enforced waystation for 19th-century immigrants to be certified free of diseases like cholera. “If you hike around there,” notes Thomas of relics that visitors find, “you can still see remnants.”

Catch of the Day

If you reel in legal-size speckled trout or redfish, Thomas will fillet it on shore and point you toward Mickey’s Bar & Grill, a weathered open-air heap by the San Patricio marina that grills, blackens, or fries your catch for $12.95 per half pound, plus two sides.

Without a catch to cook? Order peel-your-own shrimp, fried oyster po’boys drizzled with chipotle aioli, or a moist flounder sandwich with a side of hand-cut fries.

Downtown’s Rialto Theater schedules weekend stage productions like this year’s headliner, the Tony-nominated children’s musical A Year with Frog and Toad. Opened in 1937 as a movie theater, the Rialto shuttered in 1991 until new owners rescued it in 2004 and converted it to a nonprofit arts venue in 2008. Volunteers like Karen Froeschner act, sell tickets, answer the phone, run the bar, and clean up afterward. They also staff the theater’s gallery of local artists Thursday through Saturday from 11 a.m. to 4 p.m.

“The Rialto miraculously survived Hurricane Harvey with minimal damage,” Froeschner says. “With the help of recovery funds, we were able to renovate and even improve our façade.” 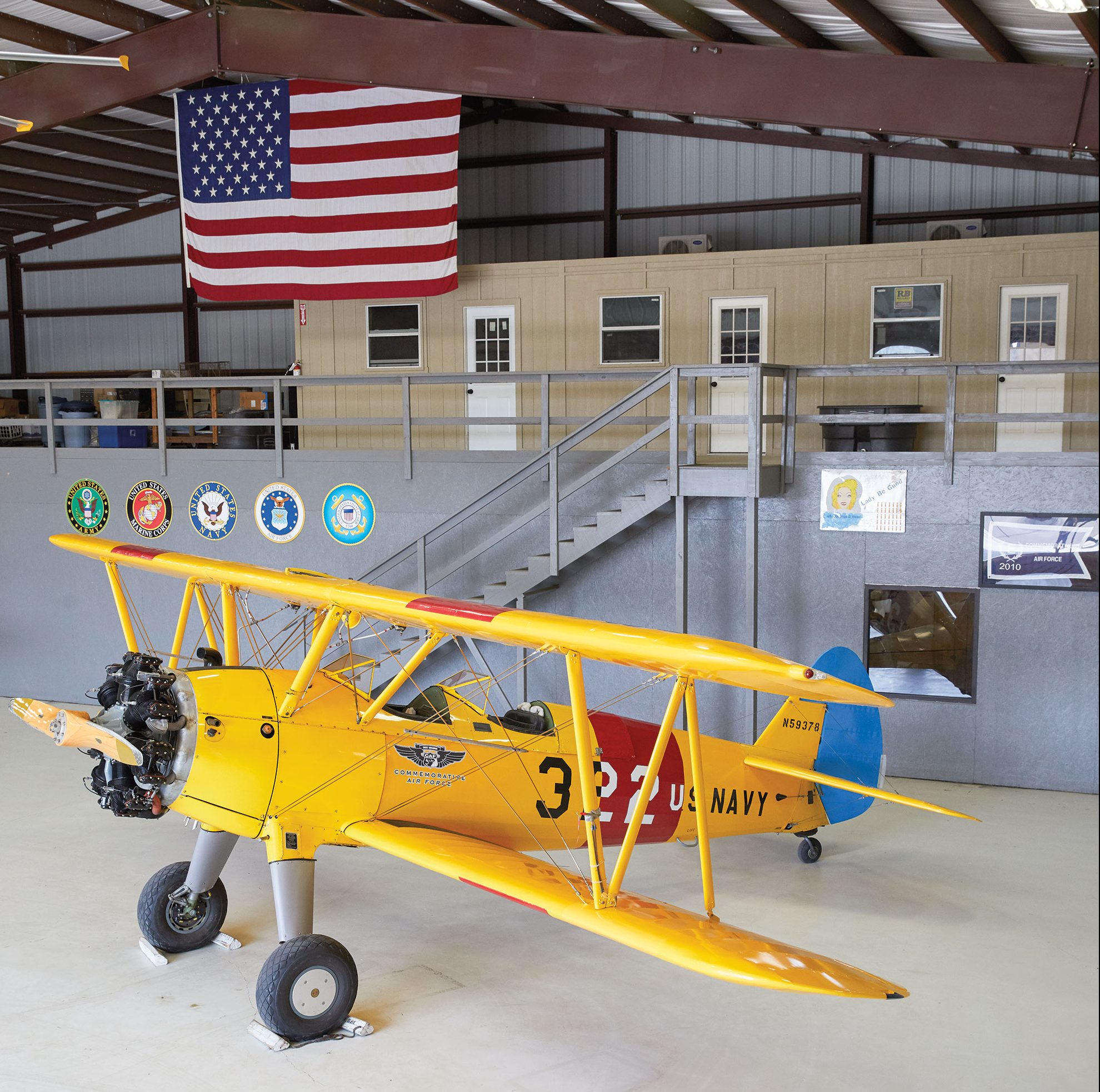 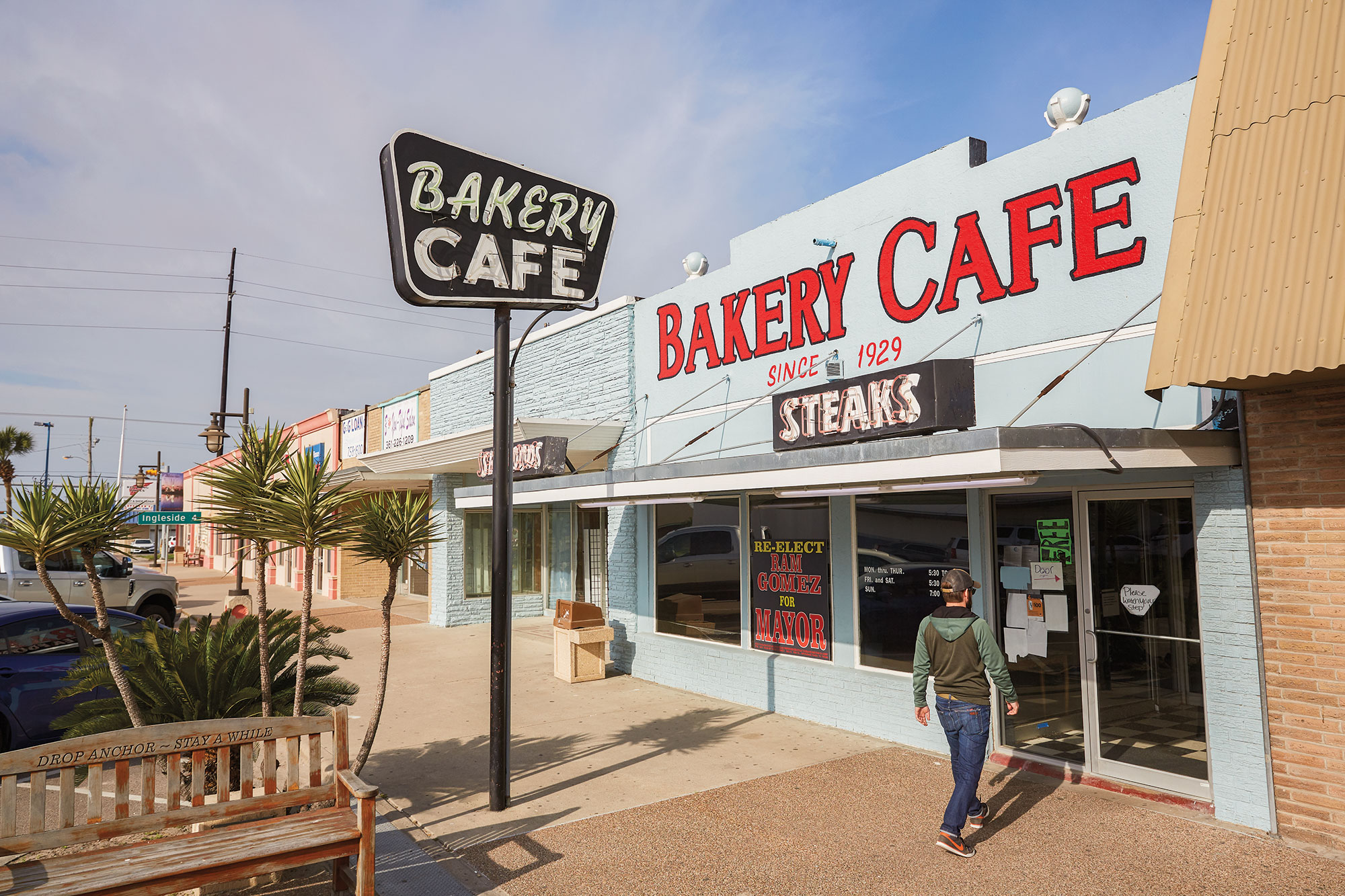 Pick the first Saturday of the month to tour a military history museum at McCampbell-Porter Airport, and eat pancake breakfasts supplied by members of the Commemorative Air Force, the museum’s operator. Try the flight simulator and view exhibits honoring World War II’s Women Airforce Service Pilots (WASPs), including the 38 who died during the war in noncombat missions, and the “Aztec Eagles,” a Mexican squadron that fought alongside the Allies in the South Pacific.

“I use my educational background to take people down a memory lane that is fast disappearing,” says Robert Perry, honorary CAF “colonel” and self-
described Marines brat.

Next, peruse the shops and galleries repopulating Aransas Pass’ historic district post-Harvey. “We are providing a place for Coastal Bend artists and artisans looking for a home,” says Dinah Bowman, owner of Azul, noting the closure of other galleries since Harvey. When it opens this summer, Azul will have an outdoor courtyard for larger works; indoors will be stained glass, ceramics, jewelry, prints, sculptures, and paintings, including Bowman’s signature “fish rubs” from a Japanese technique she adopted in her 50 years as an artist.

If your rental has a kitchen and a stock pot, your last stop is Captain Joe’s Seafood Market, a recovering Harvey venue, for fresh-caught shrimp to dump into a Cajun boil. A few steps away and across the street, H-E-B has the remaining ingredients, like andouille, new potatoes, and corn on the cob. 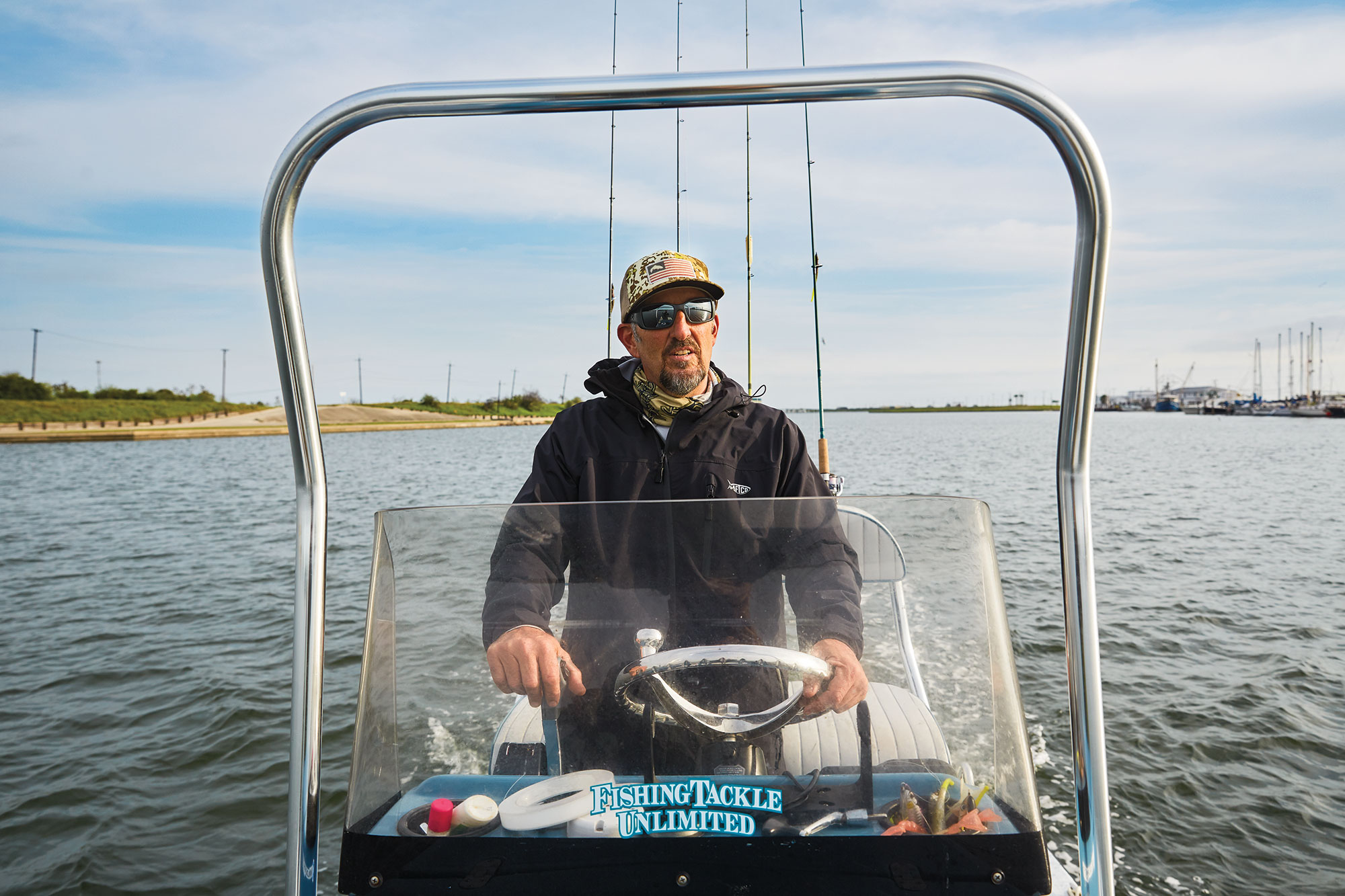 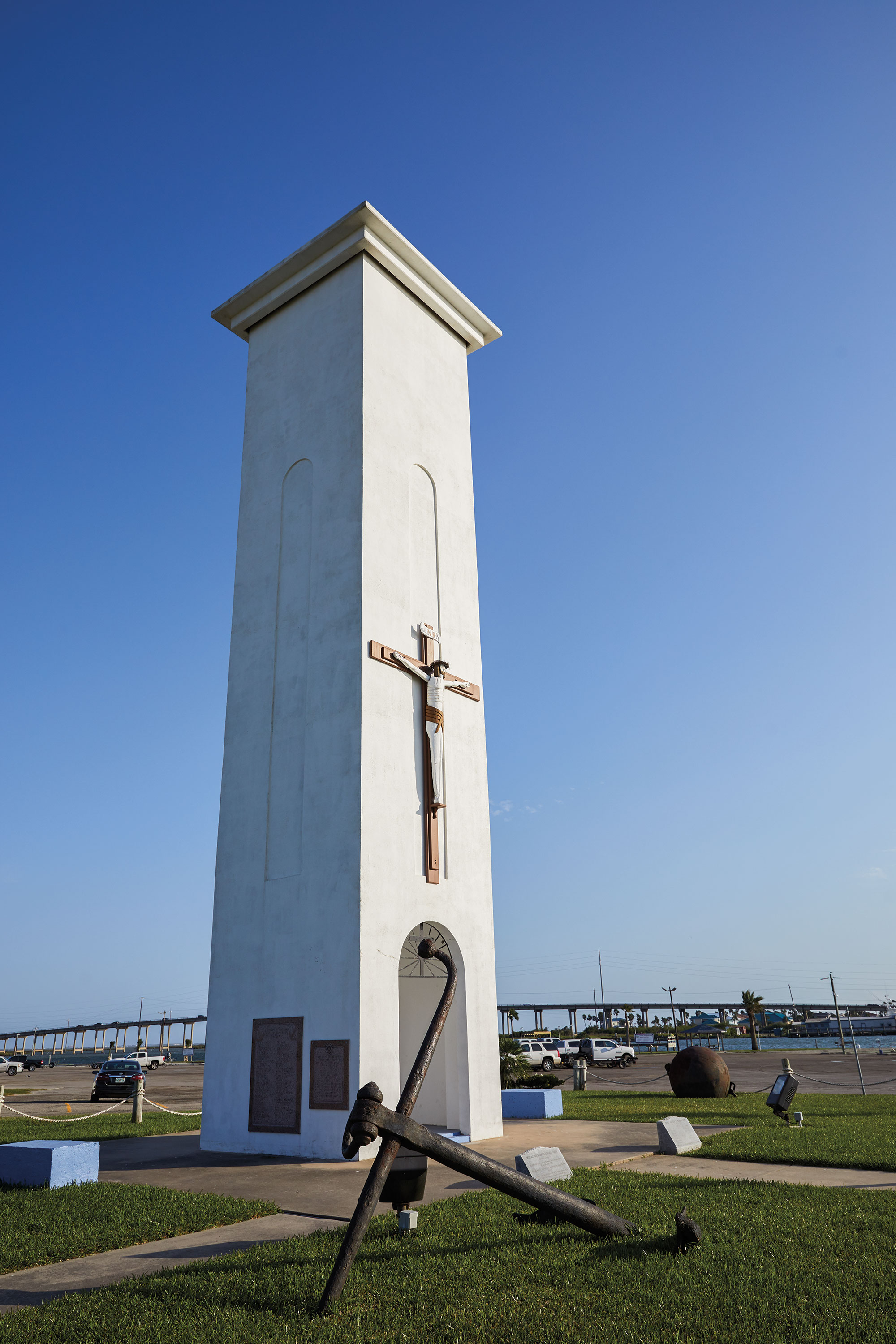 Haven’t had enough Saltwater Heaven? Rent a kayak and explore the Texas Parks & Wildlife Department’s first designated paddling trail, Lighthouse Lakes, in waters shallower than a skiff can manage. Slowride guide Thomas’ eco-tours may include beaching the kayak and hiking Redfish Bay’s islands. “It’s the simplicity and places you can get to that nobody else can,” Thomas says. “You fish, you hang out, you fix your meal, you lay back and look up at the sky. It’s like nowhere else,” he says.

Chuck West, Aransas Pass’ harbor master, oversees Conn Brown’s public boat launches, parks, and picnic grounds north of the State Highway 361 causeway. That includes a final stop on your sojourn: the Seaman’s Memorial Tower, with its stained-glass alcove and tablets engraved with the names of area fatalities at sea.

It is “a place for private thoughts,” West says, “and it serves as a place for solace.”

RV parks are plentiful in Aransas Pass. Ransom Road RV Park and Hampton’s Landing are close to the county’s public marina, but simply pitching a tent on Redfish Bay’s shorelines is always an option.