100 Years After Women’s Suffrage, a Bullock Museum Exhibit Highlights Artifacts of the Era

'Sister Suffragists: A Celebration of the Suffrage Centennial' tells the story of Texas women’s struggles for equal suffrage in the 1890s and early 1900s with artifacts like posters and pamphlets 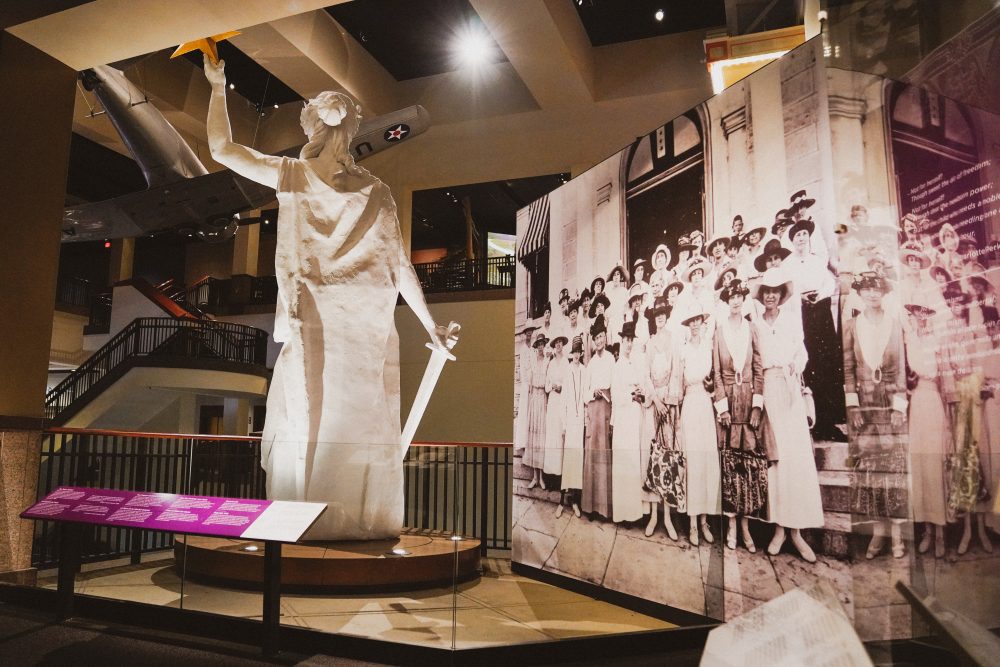 “Sister Suffragists: A Celebration of the Suffrage Centennial” is on display at the Bullock through Aug. 31. Photo Courtesy Bullock Museum

The place is the Travis County Courthouse. The date is June 26, 1918. Dozens of women are standing on the courthouse steps, having just registered to vote for the first time in their lives. Two older ladies look back at the camera with an inquisitive expression that seems to say, “Why did this take so long?”

Enlarged to mural size, the photograph in Austin in the Bullock Texas State History Museum‘s exhibit Sister Suffragists: A Celebration of the Suffrage Centennial conveys the magnitude of the time. While Texas women were allowed to vote in primary elections in 1918, women weren’t granted full voting rights nationwide until ratification of the 19th Amendment in August 1920.

The Bullock tells the story of Texas women’s struggles for equal suffrage in the 1890s and early 1900s with artifacts like posters and pamphlets. A 1915 catalog of women’s suffrage supplies lists “speeches, flyers, plays, pencils, posters, buttons, postcards, sashes,” and other materials useful to the cause. One poster features flags of 11 nations, including Russia, where women already had the vote. The exhibit also displays apparel, including a brown wool day dress from the 1890s, to illustrate how the era’s fashion left behind “bulky layers and fussy details” for a “practical and streamlined” look that accommodated women’s more socially active roles.

Many of the documents on view reflect the fervent campaigning of Texas suffragists. Unitarian pastor Mariana T. Folsom was a nationally known suffrage speaker and grassroots leader when she moved to Texas in 1884 and began lecturing throughout the state. In one surviving handwritten speech of 1898, Folsom skewers Americans who believed it was unfeminine for women to express their opinions. She notes that women would not have been equipped with “brains capable of developing thought” if the natural order of things had not intended for them to be used.

A telegram from Texas suffragist Minnie Fisher Cunningham to Carrie Chapman Catt, national founder of the League of Women Voters, reports that 386,000 Texas women signed up during the two week registration period for the primary election of 1918.

A suffrage organization called the Texas Equal Rights Association is documented with a scrapbook maintained by Dr. Grace Danforth. When asked why she became a physician, Dr. Danforth spoke for thousands of Texas women, replying that women were “simply obeying laws that underlie the march of civilization.”

The exhibit runs through Aug. 31.