Volunteers, staff, and members of the Caddo Tribe rebuild structure destroyed by tornado 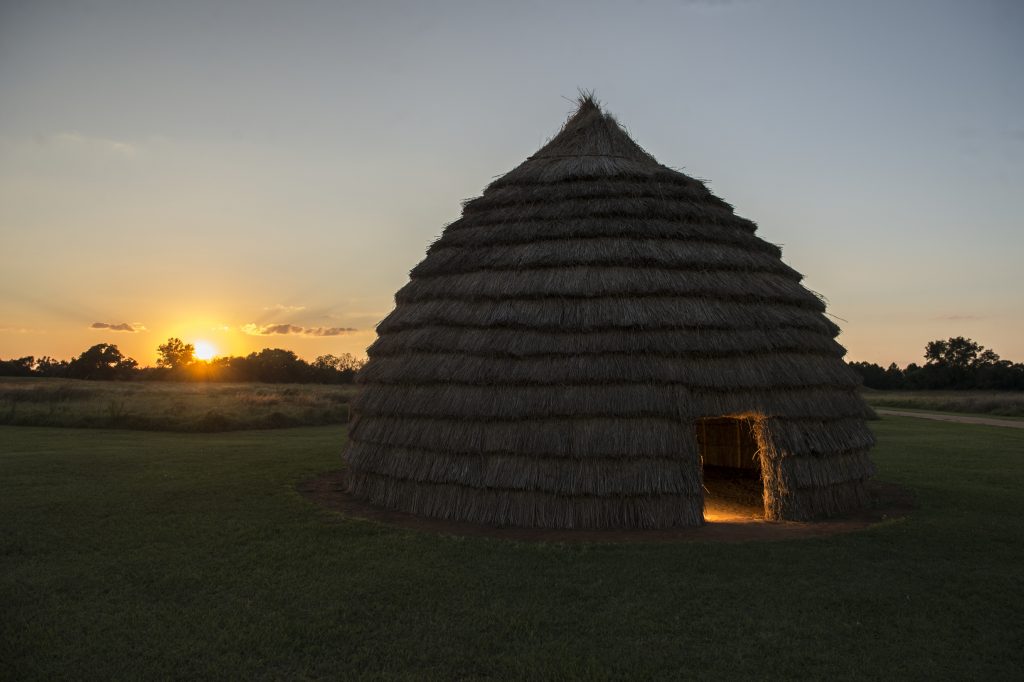 Grass houses, like this one at Caddo Mounds State Historic Site, were homes for multiple families in the Caddo tribe. Photo by Kevin B. Stillman.

In April 2019, a devastating tornado swept through Caddo Mounds State Historic Site and the neighboring town of Alto. Along with injuring about 40 people, it destroyed the historic site’s museum and traditional Caddo grass house. It took over eight months to clean up the site and ready it for reopening in January 2020, but it closed only four months later due to COVID-19. Now, three years after the tornado, volunteers join staff and members of the Caddo Nation to rebuild the grass house.

While grass houses may sound like small and delicate structures, they were actually used by the Caddo people as dwellings, built sturdy enough to withstand the elements and large enough to house multiple families. The new grass house will be the fourth one to be built at Caddo Mounds since 1981, says site manager Tony Souther.

The first one had structural issues and was burnt down ceremonially, as the Caddos would have done to an unsound structure. Construction began on a second one, but it was never completed. Then the tornado destroyed the third house, which was built in 2016 and measured approximately 18 feet high and 25 feet wide. Rebuilding was always part of the plan, thanks to the Friends of Caddo Mounds. “They immediately dedicated themselves to rebuilding the grass house,” says Souther. “Without the Friends of Caddo Mounds, it wouldn’t have happened.”

The rebuild project, which launched July 5 and runs for 13 days, until July 17, offers plenty of activities and tasks for volunteers. In the first few days of work, volunteers have assisted staff and members of the Caddo tribe with cutting pine poles and peeling away the bark from the poles. Once the poles are prepared, a group will then lay out the actual building structure, drill holes, and set the poles in the ground. From therer, the poles are tied off at the top, which creates the beehive-like shape of the house. Finally, switchgrass will be bound in between two sections of willow lathing, keeping it tightly attached to the house.

“We’ve got an exceptional crew,” says Souther. “We had probably 15 to 20 people that helped volunteer the first day, and a lot of those came back from previous events, but there were new people as well.”

Ina Williams Bullock of Livingston was one of those new volunteers who came to help on the first day of work. She belongs to the Alabama-Coushatta Tribe, and while she hadn’t visited Caddo Mounds before, she was excited to assist with the rebuilding project. “Our tribal identity, our culture—it’s very important to pass it on to the next generation,” she says. “It’s really exciting to work with another tribe.”

Bullock works as a crew leader for the Texas Conservation Corps, a youth program focused on environmental conservation. She was able to participate through the program and plans to return to Caddo Mounds and continue helping with the rebuilding efforts.

Work days begin at 7:30 a.m. and finish around 1:30 p.m. This weekend, construction on the house is restricted to members of the Caddo Nation. But there are plenty of events at the site for other visitors, including a traditional Caddo pottery demonstration with potter Chase Kahwinhut Earles, painting rocks for a future rock mural, and demonstrations of the atlatl, an ancient device for launching spears and other projectile weapons.

Once finished, the grass house will serve as an educational space complete with interior furnishings in the Caddo style. School groups and visitors will be able to learn more about the traditions and way of life of the Caddo people who inhabited the land for centuries. For volunteers like Bullock, the project is an opportunity to pass on this tradition. “It’s very, very interesting, being a part of something that big,” she says. “That’s going to be a part of history for the Caddos.”