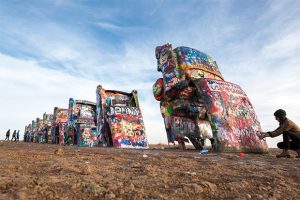 I’ve never been a huge fan of birthday celebrations, primarily because I’ve not been able to articulate the ideal birthday ritual: one that achieves the perfect balance of the philosophical and the frivolous. But it is important to acknowledge a milestone, particularly a big one, and in the spirit of the quest, it’s time for me to throw in a few words about how Texas Highways is 35.

Thirty-five seems old for a magazine, but—according to Professor Samir Husni, aka Mr. Magazine (mrmagazine.com)—the oldest in the United States is Scientific American, which started in 1845, the year Texas became a state. Husni notes that there exists a publication in the Czech Republic (it’s called Kvety—translation: “flower”) that is 11 years older than Scientific American and which claims the title of oldest continuously published magazine in the world.

Even if TH isn’t the oldest, a lot can happen in 35 years, and Texas Highways has evolved in some exceedingly interesting company. For starters, the Cadillac Ranch was first planted on the Panhandle’s High Plains in 1974. Southwest Airlines was only a couple of years old and operated fewer than five planes that year. Herb Kelleher and company nabbed their fifth plane the next year, 1975. And that’s about the time that Austin City Limits first went on the air. Now Southwest flies something like 3,200 flights a day and ACL hosts a huge music festival that dwarfs the television show.

Texas Highways has held to its basic mission all these years: great photographs and strong writing about this strangely shaped state, the characters that live in it, and all the amazing places we all call home. During its 35 years, the magazine has enjoyed an incredibly loyal readership that renews subscriptions year after year, and some for more than 20 years.

And now Texas Highways also reaches Texas travelers through its Web site (www.texashighways.com), as well as through Facebook and Twitter. We’ll have to ask original TH Editor Frank Lively if he knows how to tweet.