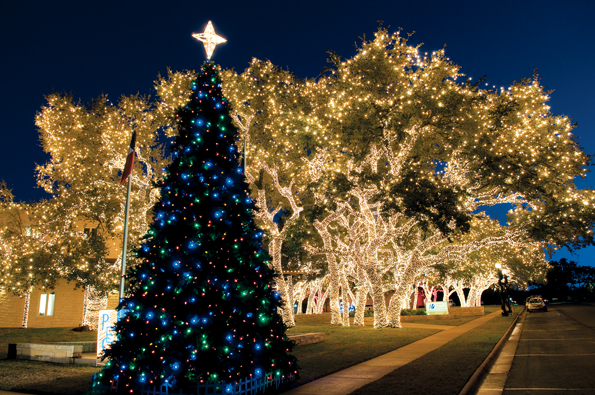 Even in mild Texas winters, there’s something about the shorter days of the season that makes the human soul long for more light. As daylight fades and we head toward the Winter Solstice, we seek out light wherever we can. During the holidays, we brighten our homes with glowing decorations, and at night, we revel in the sparkling illuminations that punctuate the darkness outside.

In Central Texas, this last tradition plays out in the form of the Hill Country Regional Lighting Trail, during which visitors enjoy spectacular lighting displays presented by 11 area towns. Collectively, these displays twinkle like the Milky Way descending from the heavens to bring a bit of warmth to earth.

Last year, my wife, Christina, and I decided the week before Christmas to bypass frantic airports and obligatory bouts of overeating. Instead, we’d give ourselves over to the enchantment of such popular holiday spectacles as the fanciful Walkway of Lights in Marble Falls and the one million lights ablaze at Pedernales Electric Cooperative in Johnson City. Since we’d recently relocated from Austin to Houston, exploring the lighting trail was not only a way for us to indulge our taste for glittering spectacle, but also a sort of farewell lap of some favorite small towns. With our two-year-old daughter, Ursula, in tow, we visited five of the towns participating in the holiday-lights extravaganza. The mix of designs—from flashing images of Santa on water skis to huge, glowing globes proclaiming “Peace on Earth”—surprised us with their ingenuity. 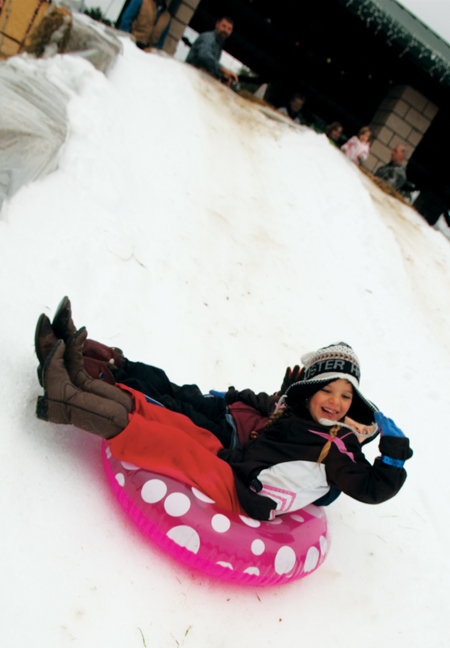 On Dec. 11 in Llano, kids tube down a man-made snow hill as part of a month-long “Starry, Starry Nights.” (Photo by Michael Amador)

We started our grand tour in Marble Falls. Set up in Lakeside Park on the shores of Lake Marble Falls, the elaborate displays along the Walkway of Lights were humorous and heartfelt, with everything organized exclusively by volunteers. Here, we encountered not only the flashing Santa Claus on water skis, but other Saint Nicks in a variety of pastimes that made me wonder if the jolly old elf might actually be a so-called Winter Texan. We found him not only happily slaloming on the lakeside, illuminated by hundreds of tiny lights, but also driving a tractor, captaining a ferryboat, and trying to escape a dog by climbing a tree. Each new display offered Ursula a chance to clap and point. As she grabbed our hands to pull us along the trail, her enthusiasm was infectious.

Elsewhere, we saw patriotic creations recognizing the sacrifices of soldiers overseas in Iraq and Afghanistan (a reminder to give thanks for our own happy holiday circumstances), as well as depictions of elves, penguins, and snowmen merrily punctuating the trail. With the reflections of the lights in the water, the lakeside scene seemed magical.

Generally, each town along the tour has its own signature way of ringing in the holidays. (Most of the Hill Country celebrations take place from Thanksgiving until around December 20, with the lighted displays usually staying up through the end of December.) The capper on the Marble Falls trail is the tunnel of lights at the very end.  With more than 12,000 clear bulbs illuminating the night, the tunnel feels like a supernatural passageway to the heart of the holidays.

Besides its own lovely riverside walk of lights in Badu Park, Llano’s lineup includes a parade that takes place in early December; the brightly lit floats make a circuit around the courthouse. Llano’s annual Snow Day on the second Saturday in December also takes place at the park. It features 10,000 pounds of artificial snow and a “snow hill” for sledding. You can rent a sled or bring your own.

In Burnet, during the first two weekends in December, the First Baptist Church re-creates the historic main street of Bethlehem east of the town square. Parishioners in period garb demonstrate traditional crafts such as pottery and candle making; cook bread and stew over open fires; portray Biblical roles; and even lead camels, donkeys, and other livestock down the street. Our family tour took place a little too late to catch all of the activities in full swing, but as we continued to cruise the hilly countryside amid the Highland Lakes, we found ourselves swept up in the holiday cheer.

“Christmas is a nostalgic time; it brings back so many memories,” said Karen Oestreich, a real estate agent we met in Fredericksburg. “I can remember begging my mom to drive us down Main Street.” Oestreich’s first exposure to holiday lights in the Hill Country came nearly half a century ago; by the mid-1980s, the town had abandoned the tradition. However, she and some friends reignited the institution in the 1990s. The City of Fredericksburg has since
taken over responsibility, with the Chamber of Commerce, the City Council, and the Parks Department providing support for what was for many years a volunteer effort. 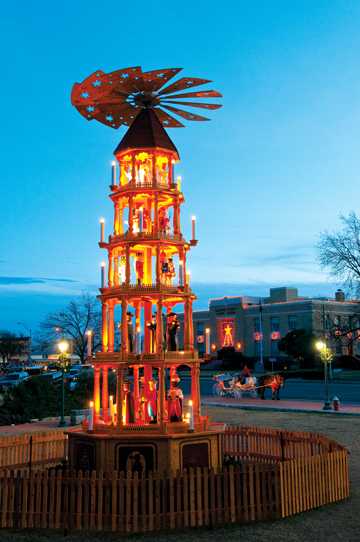 In 2009, Fredericksburg debuted its 26-foot-tall Christmas “pyramid,” which pays homage to the town’s German heritage. (Photo by Kevin Stillman)

One outstanding new addition to the light show in Fredericksburg is a 26-foot-tall, maypole-like Christmas “pyramid” handcrafted in Germany—and installed in the “Marktplatz,” or Main Square, for the first time last year. The $150,000 pyramid, which is lit by electric candles, has revived holiday tradition and serves as a reminder of the town’s German heritage. The colorful pyramid, which features hand-carved figurines displayed on five merry-go-round platforms, is the second-largest of its kind in the United States (the tallest is reportedly at the Dollywood amusement park). The design, carving, and basic construction took place at the famed Erzgebirge-Palace in Mainz, Germany, which is well known for its wooden nutcrackers and music boxes.

The Marketplatz also boasts the Eisbahn—an outdoor ice-skating rink—and the musical holiday show at the Rockbox Theater just off Main Street offers more family fun. Though Ursula was too small to hit the ice, she watched intently as groups of school-age kids swooped across the rink. Of course, shopping in Fredericksburg is always another option. Christina booked herself a spa treatment and then browsed a clothing store, while all three of us checked out the interactive books and retro wooden playsets at the
Spunky Monkey toy store on Main Street. Yet, time and again, it was the trail’s bright lights that prompted our awe and excitement. And not just the official displays, with 50-foot-tall trees and courthouses lit up like something out of a science-fiction film, but also the way individual homeowners on the backstreets and even the backroads came up with novel designs as a way to celebrate the season and offer a gift for all.

As we wrapped up our tour, we approached Johnson City just as the sun was going down. The town has two of the state’s best-known lighting displays—the Blanco County Courthouse is draped with 100,000-plus lights, while the Pedernales Electric Cooperative and the surrounding block of trees are strung with a million lights. Add in the lamplight tour of LBJ’s boyhood home (across the street from the co-op), and the traffic can get a bit thick rolling through town in the run-up to New Year’s. Still, as the bright lights came up on the co-op headquarters, I was reminded that one of President Johnson’s major accomplishments was bringing electricity to rural Texas.

With my daughter at my knee, marveling at the trees outlined in thousands of tiny lights, I pondered the audacity of that long-ago dream to light up Texas. In this age of electronic gizmos, it can be hard to keep in mind how different life must have been before the state was wired. But witnessing the Hill Country’s festival of lights, it was easy to entertain the idea that myriad miracles might still be afoot.

Each town has its own attractions and associated holiday events—from an ice-skating rink in Fredericksburg to fire-works in Johnson City. Many displays stay up through New Year’s Day, but most official activities end by the week of December 20. For details about the trail, call 830/997-8515; www.tex-fest.com/regional/index.htm. Weekends can be fun but crowded, so families looking for a quieter, small-town experience may want to try a weekday tour.

If you want to see the displays in several towns, staying at the Inn on Barons Creek (830/990-9202; www.innonbaronscreek.com) in Fredericksburg puts you close to a lot of action. Closer to Marble Falls, but still off the beaten path, Hugh and Cindy Vaughn offer overnight stays at their charming Boat House on Lake LBJ in Kingsland (325/388-5585; www.lakelbjboathouse.com). For other options, contact the chambers of commerce in the towns along the trail.