In Houston, Crawfish Season Is The Most Wonderful Time of the Year

From traditional boils in the Heights to Viet-Cajun style in Asiatown, mudbugs are in demand across the city 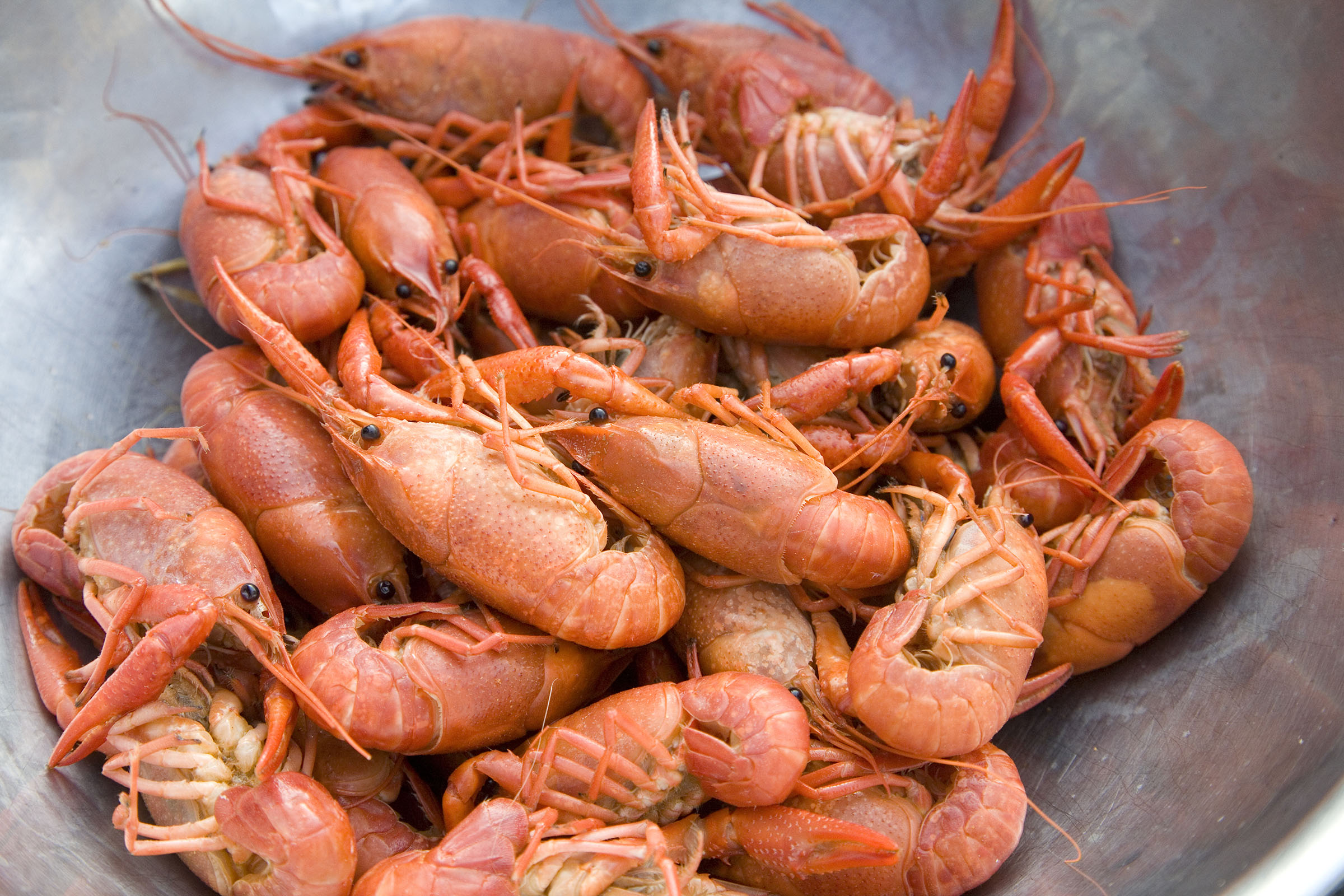 The late St. Louis Cardinals baseball great Stan Musial once said, “Houston has three seasons: July, followed by August, and then summer.” Since then, Houstonians have invented a new one: crawfish season, which is peaking now and for the next two months.

You know it’s crawfish season when you start smelling the tangy and spicy aroma of a pot on the boil at nearby church festivals, in supermarket parking lots, and permeating neighborhoods rife with backyard affairs. Restaurants across the metro area begin touting crawfish specials on their marquees and raising yellow flags emblazoned with red crawfish to indicate they’re part of the Republic of Mudbug. Meanwhile, friends gather in platoons to consume the crustaceans by the pound.

April’s mild weather makes it the ideal month for crawfish, since they’re made to be consumed on patios and decks. Messy, tricky to navigate, and hard to fill up on, they are among the most social of dishes—definitely not date-night fare or something to eat alone or on the go. Nope, you eat them leisurely as you unwind, imbibe, laugh, and tell stories. And their yearly season coincides with the end of Houston’s five or six months of pleasant weather. There is an “enjoy them while you can” aspect.

It would seem that Houston has always been this way, but that could not be further from the truth. As late as the early 1980s, the few Houston restaurateurs who offered them were having a hard time giving them away.

“I know when I moved there in 1975, I didn’t know of anywhere I could find them,” says Lafayette, Louisiana-born Jim Gossen. “Even in New Orleans, they had them, but they were not as plentiful as they are now.”

Gossen is president and CEO of Louisiana Fine Foods Companies, and no man has done more to introduce crawfish culture to Texas than this proud Cajun with a lilting southwest Louisiana drawl. It was a slow process at first, he says. Working alongside the Landry family before they sold their seafood restaurants to partner (and future Houston Rockets owner) Tilman Fertitta, Gossen helped expand the footprint of Cajun cuisine in Houston at restaurants like Willy G’s, Don’s Seafood, Landry’s, and Jimmy G’s.

“When we opened Don’s Seafood in April 1976, people would order fried crawfish tails and etouffee and things like that, but they were just not that familiar with the boiled crawfish concept,” Gossen says. “Every week in season, I would order a few sacks and we would get a few orders during the week, usually to Louisiana transplants in the oil industry. But every Sunday, I would take what I had left over, boil them, and present them as garnish on plates, just so people could see what they looked like.”

Seven years later, Gossen opened Magnolia Bar and Grill, and that is one of the two flashpoints for today’s Bayou City crawfish inferno. The other, Ray Hay’s Cajun Po’ Boys, opened in 1972 and was co-owned by Ray Hay and Frankie and Luke Mandola of the famous Houston restaurant family. They hosted occasional parking lot crawfish boils beginning in 1976. The restaurant still exists today as Ragin’ Cajun.

Gossen believes the main impetus to his own slice of the crawfish boom was the addition of an outdoor deck with a bandstand at Magnolia. Boiled crawfish are best enjoyed communally al fresco and to the “chank-a-chank” strains of a Cajun or zydeco band. After all, there is a reason boiled crawfish rode the, ahem, tail end of the Cajun craze. Selling people on gumbo, blackened redfish, and jambalaya was one thing, but getting them to eat freshwater crustaceans and suck the juice out of their heads proved to be another. You need the liberating qualities of the great outdoors, live music, and a picnic table full of encouraging friends. (And perhaps a drink or three.) In any event, after adding the Magnolia’s deck, Gossen had to add an extra kitchen to keep up with demand—waitstaff were handing out up to 12,000 pounds every weekend.

By the close of the decade, Houston, New Orleans, and all points in between along the Interstate 10 corridor were full of festivals and restaurants featuring seasonal crawfish boils. The rise of crawfish farming enabled supply to keep up with the new demand. In his youth, Gossen recalls, people were limited to what they could catch in the swamps and marshes—a bare sliver of today’s bounty.

Amid this craze, Gossen says some of his best customers were Vietnamese immigrants. Places like Magnolia’s deck were reminiscent of the beachside seafood shacks called quán nhậu back home. These immigrants began experimenting with crawfish on their own, and early in this century, developed Viet-Cajun crawfish, the dish some Houstonians believe is the Bayou City’s signature offering, like Chicago deep-dish pizza or Philly cheesesteak.

Instead of simply boiling in spiced and herbed water, Viet crawfish are cooled in a sauce that includes orange peels, garlic, lemongrass, butter, cayenne, black pepper, and minced onions. Every family and restaurant then adds a secret ingredient. A little kick on the back end is provided with a lime juice and black pepper dipping sauce.

Trong Nguyen opened Crawfish and Noodles, where the dish made its public debut, in 2008. By 2014, he was being nominated for James Beard Awards. His restaurant is the crown jewel in Houston’s Asiatown, where you will find the greatest concentration of such establishments. Check out Crawfish Cafe in Hong Kong City Mall (what you lose being inside, you gain in feeling swept away to a mall in Saigon) or any other place you might come upon on western Bellaire Boulevard. On the far Northwest Side, there’s Shabang Crawfish & Mi Quang for both crawfish and a huge variety of Viet seafood.

To a lesser degree, the Heights neighborhood is to Cajun crawfish as Asiatown is to Viet-style. My favorite is The Boil House, founded by former Louisiana crawfish farmers. Cajun Boot is something like Houston’s unofficial Louisiana embassy, and the Heights is also home to one of many locations of BB’s Tex-Orleans.

Once the sole preserve of farmers in Louisiana, Texans are turning to seasonal crawfish farming as well. While most of these farms are in the Golden Triangle area, some, like Cornelius Crawfish, are making a go of it in Matagorda County, just east of the Colorado River. You can eat them on-site at their restaurant or order sacks to go.

As for consumption, there was an unsubstantiated rumor five years ago that the 6 million or so people in Greater Houston at that time consumed more crawfish than Louisiana’s 4.7 million people. Gossen, who splits his time between Lafayette and Houston, chuckles at that notion. “Well, I don’t know about that but I do know that I just see truck after truck after truck heading to Texas,” he says. “And just think about how many they sell just at H-E-B.”

While their popularity has spread through Deep East Texas, crawfish haven’t quite caught on in Austin or San Antonio. Gossen thinks the capital city’s restaurant economy and superheated real estate market does not favor the business model. You need a big place, he says, with lots of tables inside, or ideally, a huge place with lots of tables inside and a deck or yard with still more tables outside and room for parking besides. Crawfish eaters linger, so tables can’t be flipped as fast as at other restaurants, meaning each table brings in less money each night.

This is not to say Austinites don’t enjoy them. Beaumont-bred funky mystic Kevin Russell, who goes by the stage name Shinyribs, told me a while back that Austin’s crawfish scene reminds him of that of his youth on the Neches River—notably at Shoal Creek Saloon. To Russell, crawfish are mainly a social thing rather than a dining option. “I just go to a party usually if a friend is doing a boil,” he said. “Ya know, Beaumont style.”

If your hometown isn’t a part of the established Texas crawfish scene, chances are pretty good there is at least one festival in your neck of the woods. From Mauriceville on the Louisiana border to Fredericksburg in the Hill Country on down to Port O’Connor on the Gulf Coast, there are events dedicated to crawfish. The most intriguing might be the annual Crawfish and Cannons at Fort Belknap in North Texas. This one features a large crawfish boil, live music, armadillo races, a star appearance by the official State of Texas Longhorn Herd, a bloody mary bar, and cannon firings on the hour, every hour. Talk about bigger bang for the buck.