Loud and Invasive, the Monk Parakeet Charmed Its Way Into Texas Almost 50 Years Ago

Part of the parrot family, the bird can be found in urban areas like Houston, San Antonio, and Austin. 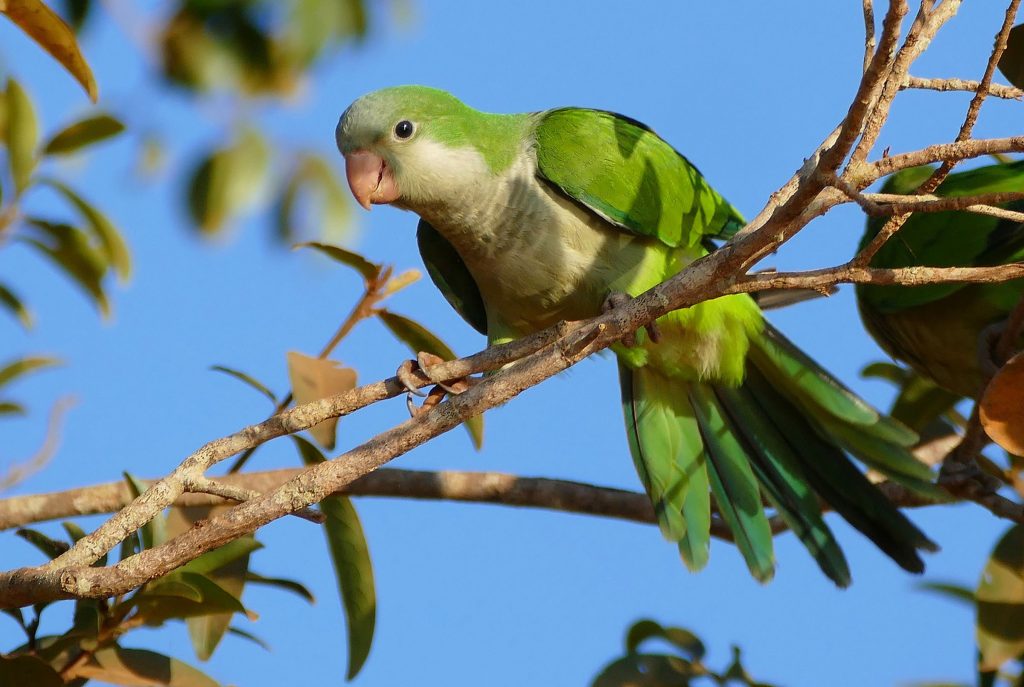 If you live along the coast or in any of the big metros of the Texas Triangle, you have seen or at least heard the cries of a monk parakeet. The electric green, gray-faced bird is a member of the parrot family and native to the plains of southern Brazil and northern and central Argentina. But the birds have also carved out a niche of their own in the Texas landscape.

No one is quite sure how monk parakeets became Texans, but the most likely scenario is a few pairs of pets escaped or were set free. They first appeared in the United States in the 1960s and ’70s. According to the Texas Breeding Bird Atlas Project, the first known sightings in Texas occurred between 1973 and 1975. Like grackles, monk parakeets (also known as Quakers) seem to enjoy urban environments, not just for feeding opportunities but nesting sites. They love the tops of cellphone and power line towers, on which they build huge communal stick nests, the largest of which can weigh 400 pounds and contain a dozen or so “apartments” for nesting pairs.

One of the largest colonies I’ve seen was in Houston. The parakeets occupied the tops of several power line structures near the 4200 block of Bellaire Boulevard, where they serenaded patrons of Little Woodrow’s pub. Smaller colonies live just west of the Heights and East End neighborhoods of Houston, and they have beach bum cousins living all along the western rim of Galveston Bay, from Seabrook to San Leon. These Margaritaville parakeets prefer the tops of palm trees. Meanwhile in San Leon, they were adopted as the mascot of Railean Distillers, Texas’ first legal rum distillery. A pirate bird for a pirate drink.

In San Antonio, you can find a more pious bunch of these monks inhabiting Mission Concepcion, and the White Rock Lake area of Dallas seems to be their Metroplex hotbed.

Austin’s monks are a conspicuous lot, often seen jostling with grackles in the parking lots of near northside H-E-Bs. They’re also spotted on the trails along Lady Bird Lake, in Zilker Park, and near Martin Middle School in the East Cesar Chavez neighborhood. For a time, there was a large colony in the light towers above the University of Texas’ intramural sports complex until redevelopment in the area brought down the light towers and scattered the birds. I have personally seen them on several occasions on the hallowed grounds of the nearby Texas State Cemetery, and they are said to flock to the historic French Legation as well. Unlike other Texas cities, Austin’s Quakers tend to seek glamor spots.

Many species of parrots and parakeets have been released into the wild in America but none have succeeded to the degree of the monk. That’s likely because they hail not from the tropics, but the subtropics of the Southern Hemisphere. While the Arctic blast of 2021 likely killed any tropical parrot colonies in Texas that might have existed at the time, the monks survived by huddling together in their communal nests, just as their ancestors survived such freak weather events in Argentina and Brazil.

Still, it’s not always all kumbayah with these birds. Fights amongst monks are not infrequent, according to Lisa Norwood of San Antonio’s Animal Care Services, who told KSAT last year, “They are not only well known for their incessant squawking, they also are prone to throwing down and starting rumbles with each other and other flocks.”

As for monk parakeets as pets, let’s just say it takes a special kind of person. Take the case of Jay Lee and his wife, Cynthia, of suburban West Houston. 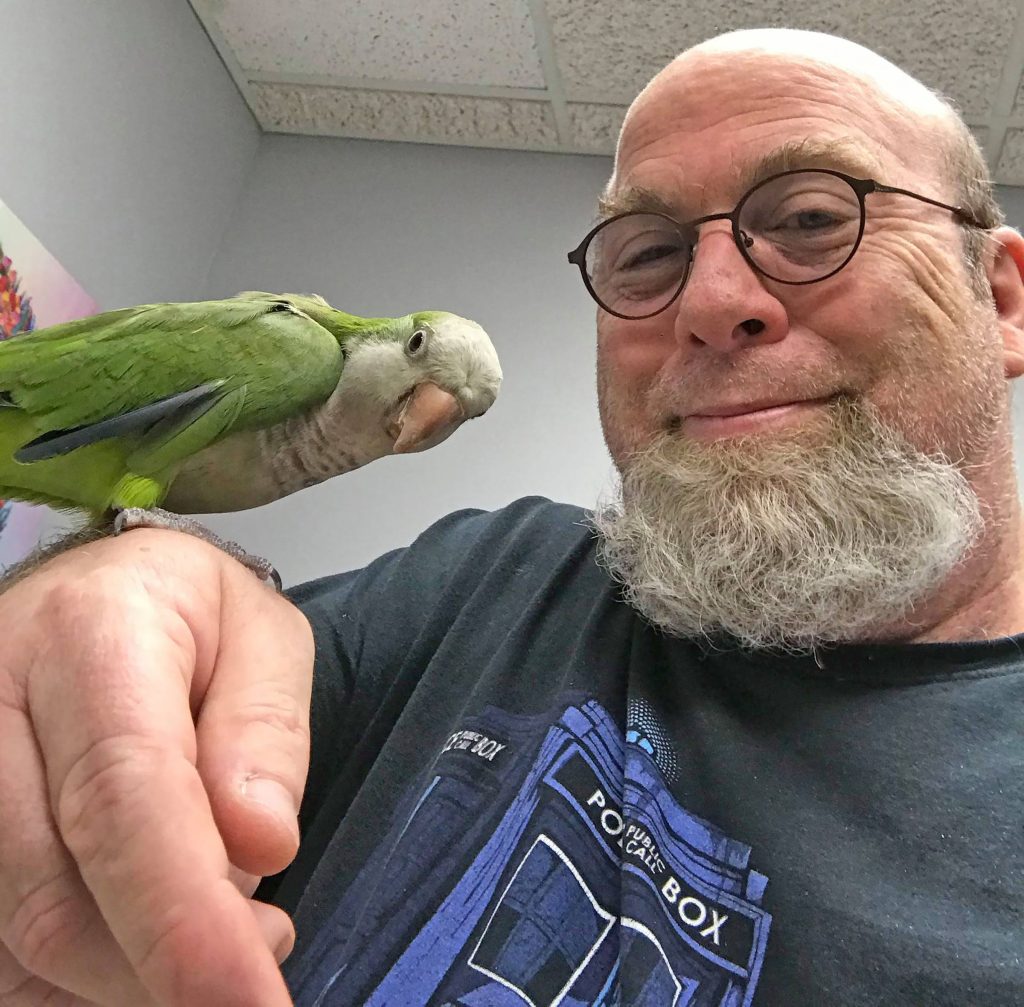 In addition to being an IT professional, photographer, and musician in the Flying Fish Sailors, a longstanding folk band with a repertoire heavy on sea shanties, Lee is an ardent birdwatcher. He was in his driveway, getting ready to head to a “geek gathering” inspired by his KPFT radio program “Technology Bytes,” when he recognized a sound.

“It was a normal Friday afternoon in 2015,” he recalls. “Cynthia was walking me to the car and I heard this squawking, and I said to her, ‘Hey, that’s a Quaker.’”

Though they had no colonies near his house, he’d seen monk parakeets around Houston and in his travels around the state. The Lees, who already owned an African grey parrot, noticed this one’s behavior—flying from tree to tree, coming closer and closer—and could tell he was agitated. The bird was in Lee’s neighbor’s yard, squawking away from a low-hanging branch, but one not so low that Lee could reach him. “So, I decided to try to save him,” he says.

He was going to try to find a way to pull down the branch and grab him when the bird took off, banked around the tree, came back from across the street, and landed on Lee’s shoulder. By the end of the day, the Lees had named him Murphy.

Certain the bird was an escaped pet and not wild, the Lees advertised their capture through the proper channels. Nobody ever came forth to claim him. Cynthia once owned a monk parakeet long ago and had kept his toys, cage, and other accouterments just in case. That was seven years ago, and Murphy is still squawking and warbling.

Several years in, Murphy would give the Lees another big surprise. “A gender reveal in the form of a prolapsed cloaca,” Lee says, referring in geek terminology to the bird’s “universal port” for mating, defecating, urinating, and laying eggs. Poor Murphy tried to lay an egg, and it had broken in her cloaca, making her grievously ill.

“There’s no such thing as a ‘Free Bird,’” Lee notes, citing the mountain of vet bills.

Another serious situation developed during the big freeze of February 2021. The Lees lost power for several days and the birds might have died were it not for their home’s fireplace. “We kept that stoked and warm throughout,” Lee says. “Their cages were closer to the fireplace than we were,” adds Cynthia.

And how has Murphy repaid them?

“These days she’s gotten a lot louder and demanding of personal attention and seeing to her needs,” Lee says. “At first light, she is off to the races. Fortunately we have gotten old and don’t mind waking up at the crack of dawn.”