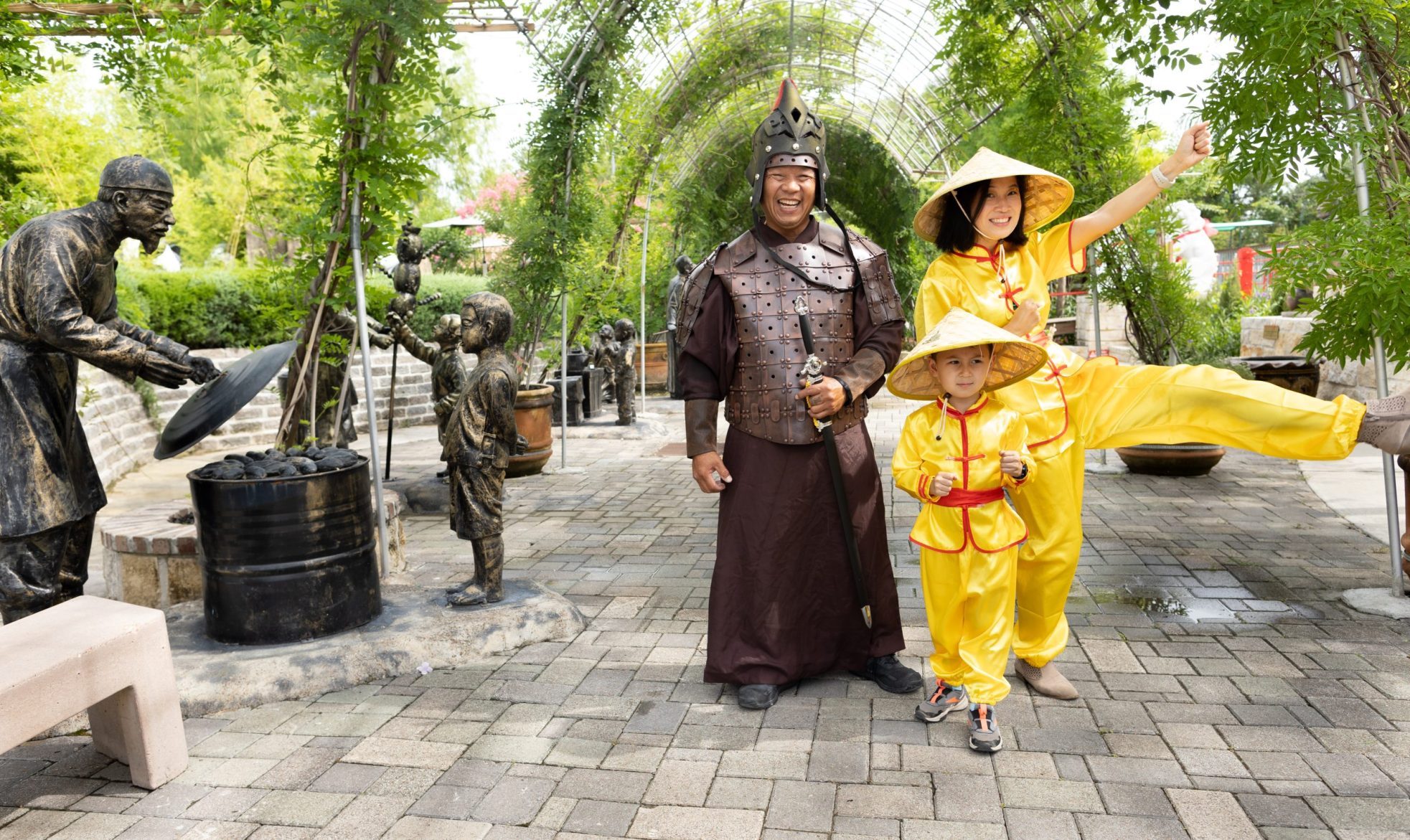 Getting into the spirit at Lucky Land.

Just inside the bright red and yellow entryway arch of Lucky Land in Houston, traditional Asian music plays softly, providing a gentle backdrop to the rustling of trees and bamboo stalks and water splashing in an immense koi pond. Serenity in the midst of suburban Houston is just one of many surprises this cultural attraction offers. Every path through the 3-acre park reveals Asian art, artifacts, or architectural exhibits—many are interactive, some are real, and others replicated.

“We began opening in the Year of the Rooster,” says Nida Lee, who along with her husband, Jack Lee, runs Lucky Land on a lot adjacent to their Sunny Flea Market. After inaugurating the outdoor park in 2017 with just a few exhibits, the couple kept building and adding—guided in part by feng shui principles—until the theme park conveyed an impression of being far removed from the city. 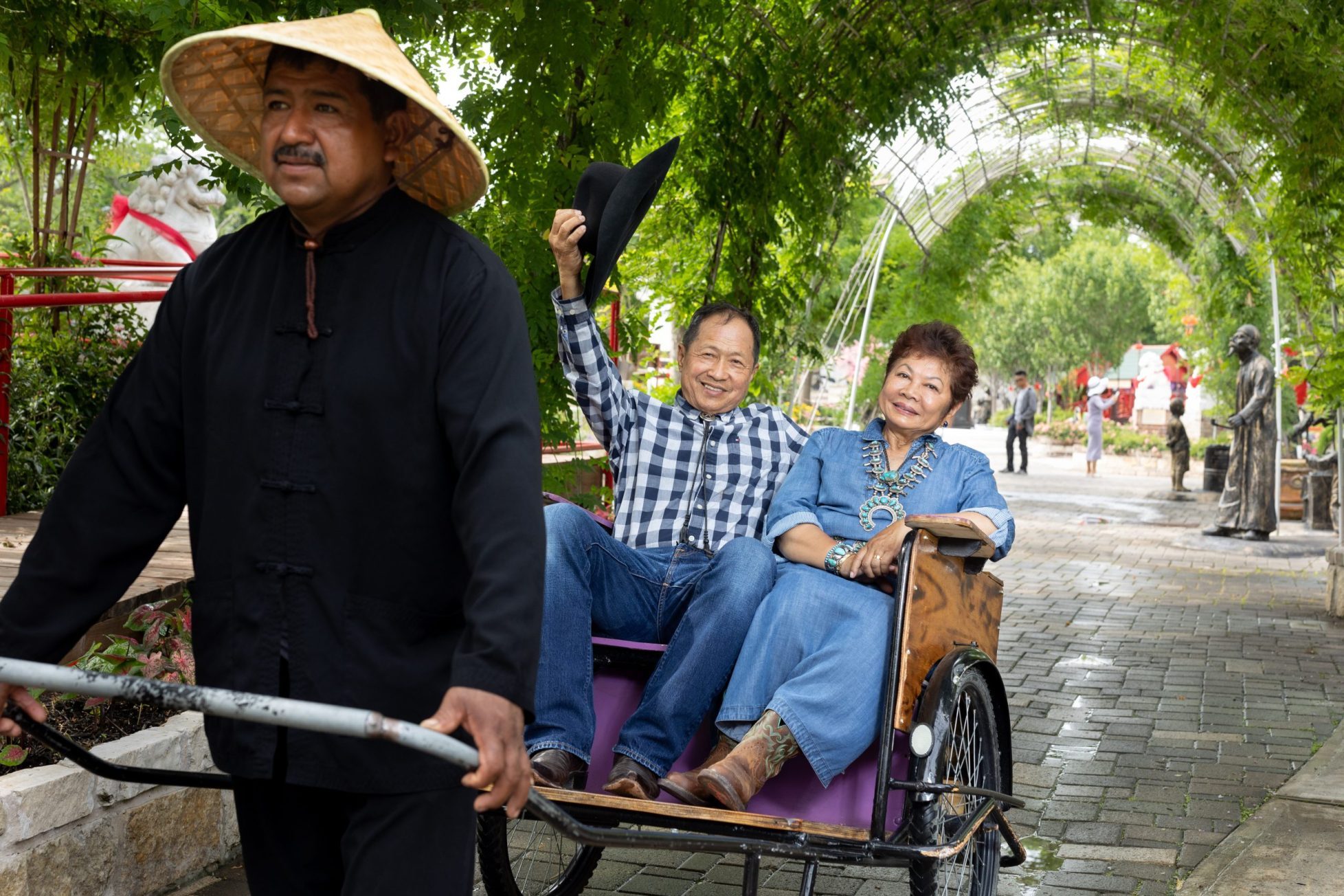 Jack and Nida Lee opened Lucky Land in 2017 and have created a peaceful park dedicated to Asian culture.

Pathways take visitors past sculptures of dragons, pandas, and a small, walkable replica of a section of the Great Wall of China. A sculpture garden features life-size Shaolin kung fu warriors, while a separate pavilion celebrates the Happy Buddha, which Lee says symbolizes happiness, healthiness, longevity, and balance. Winding along Lucky Land’s back wall, a detailed landscape of meticulously handcrafted miniature buildings and temples is peopled with tiny figurines portraying everyday life in their home called Lucky Village.

I was especially excited to view Lucky Land’s terra-cotta army. A few hundred 1/3-scale replicas of first-century Chinese soldiers and their horses stand within long, narrow earthen rows. These cracked and weathered clay soldiers once belonged to an army—6,000 strong—at Forbidden Gardens, a Chinese cultural attraction that was formerly located in nearby Katy. 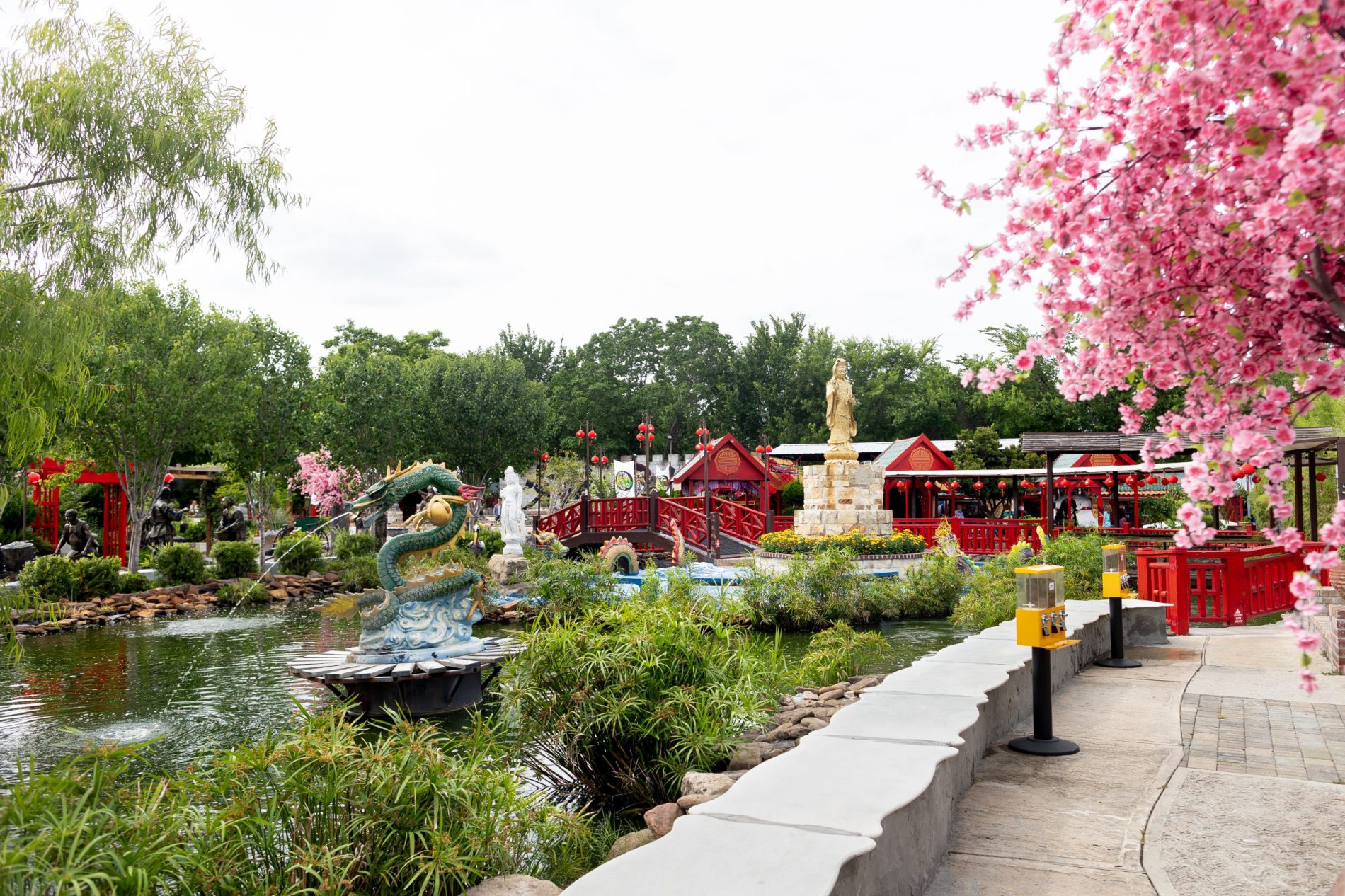 Opened in 1996, Forbidden Gardens based its clay soldiers on relics that archeologists discovered in 1974 buried at the tomb of China’s first emperor. When Forbidden Gardens closed in 2011 to make way for an expansion of Grand Parkway, it sold many of its soldiers to the public. But not all of them.

“The rest were left for demolition,” Lee says. “I didn’t want them all to be buried in the ground.”

With Jack, she quickly organized a crew and scoured the Forbidden Gardens site. “We threw nothing away,” she recalls. “We kept mountains of stuff—every stone, every piece of broken marble. The bamboo! We kept even the soldiers with no heads or limbs.”

Lucky Land exists today in part to commemorate the legacy of Forbidden Gardens, which Lee fondly remembers visiting. She told me the dollhouse-size pieces of Lucky Village are actually the remains of a 1/20-scale version of Beijing’s Forbidden City, another showpiece Forbidden Gardens exhibit she saved from the bulldozers.

And always close by stand the ranks of the terra-cotta soldiers, silently enduring the Texas sun while helping to preserve Asian history. How lucky for them, and for Texas, that Lee took the time to rescue them.