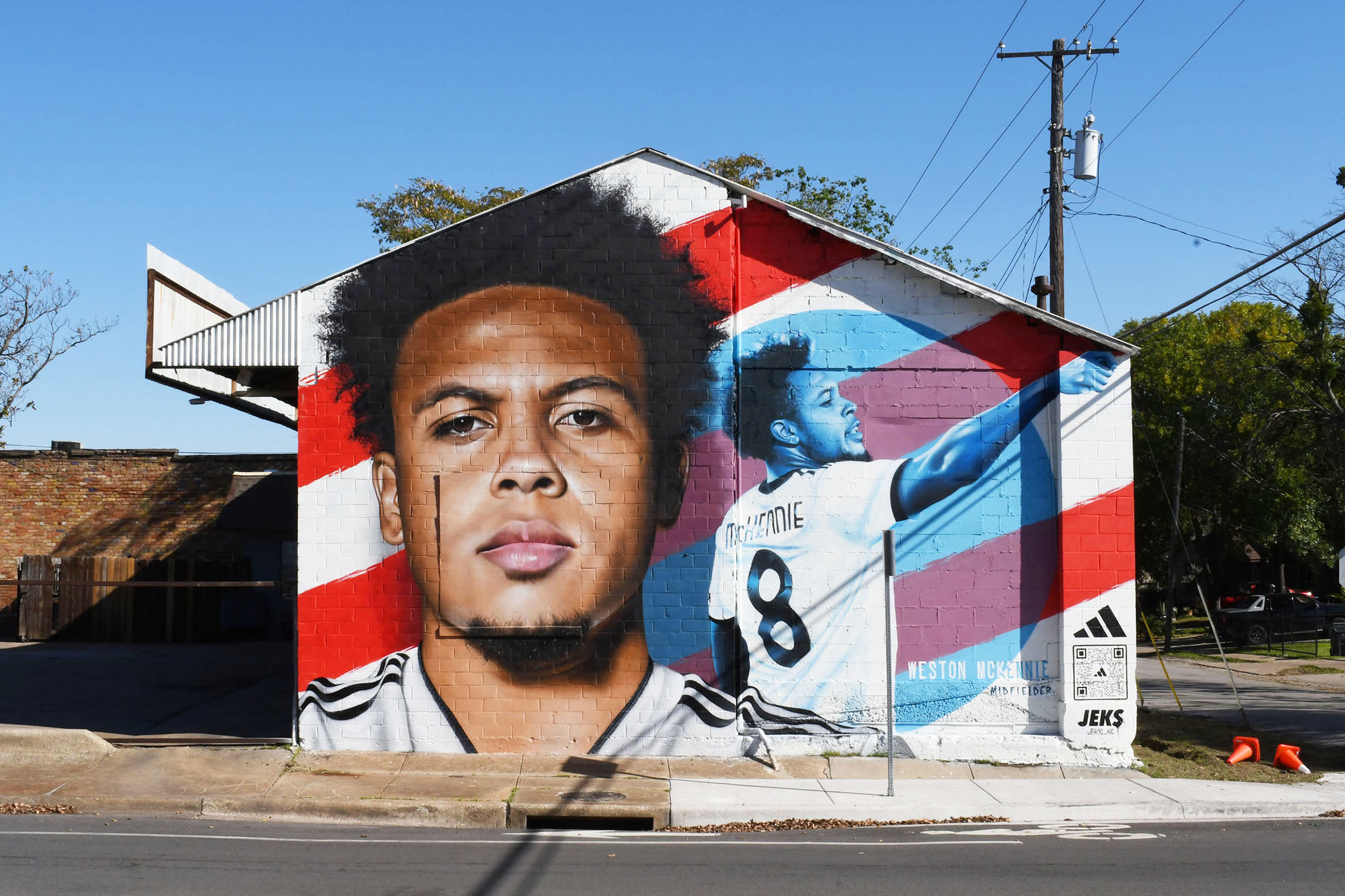 Weston McKennie’s mural can be found at Lloyd Hall’s Alignment and Brake Service.

Three of the 26 players representing the United States Men’s National Team at the 2022 FIFA World Cup in Qatar hail from Texas. Kellyn Acosta, Jesus Ferreira, and Weston McKennie all have their roots in the Dallas-Fort Worth metroplex.

While most Texans are not making the flight to the Middle East to watch the team compete live (they’ll have their chance in 2026, when the World Cup comes to Dallas), support is still showing up around North Texas communities through public art. There have been two main roadside campaigns celebrating the national team across the country, and Adidas has commissioned murals of USMNT stars in a few major cities. The Emmy-award winning Apple+ television show Ted Lasso has also bought billboards in each of the players’ hometowns (or adjacent towns).

The series, starring Jason Sudeikis as an American football coach hired to lead a British soccer team, has received critical acclaim in part for its positive outlook and inspirational attitude. The billboards reflect the show’s hopeful message as each has a personalized note written in the style that Coach Lasso gives in his speeches to the AFC Richmond players on the show. For example, in the billboard for McKennie, the fictional coach says, “You and the rest of the fellas on the USMNT are gonna make more magic. And you don’t need a wand to conjure up a win, but you may want one handy for a victory dance.”

Here’s where to find the billboards and two murals in the DFW area.

McKennie, one of the stars and leaders of the U.S. men’s team, is the son of an Air Force officer. His family moved around before settling in the North Dallas suburb of Little Elm when McKennie was 9 years old. He remained in Texas before departing for German club FC Schalke 04 at age 16. Painted on the side of Lloyd Hall’s Alignment and Brake Service, the mural of McKennie features a lifelike profile of the 24-year-old midfielder and an image of him on the pitch. It is designed by JEKS, an artist based in Greensboro, North Carolina. 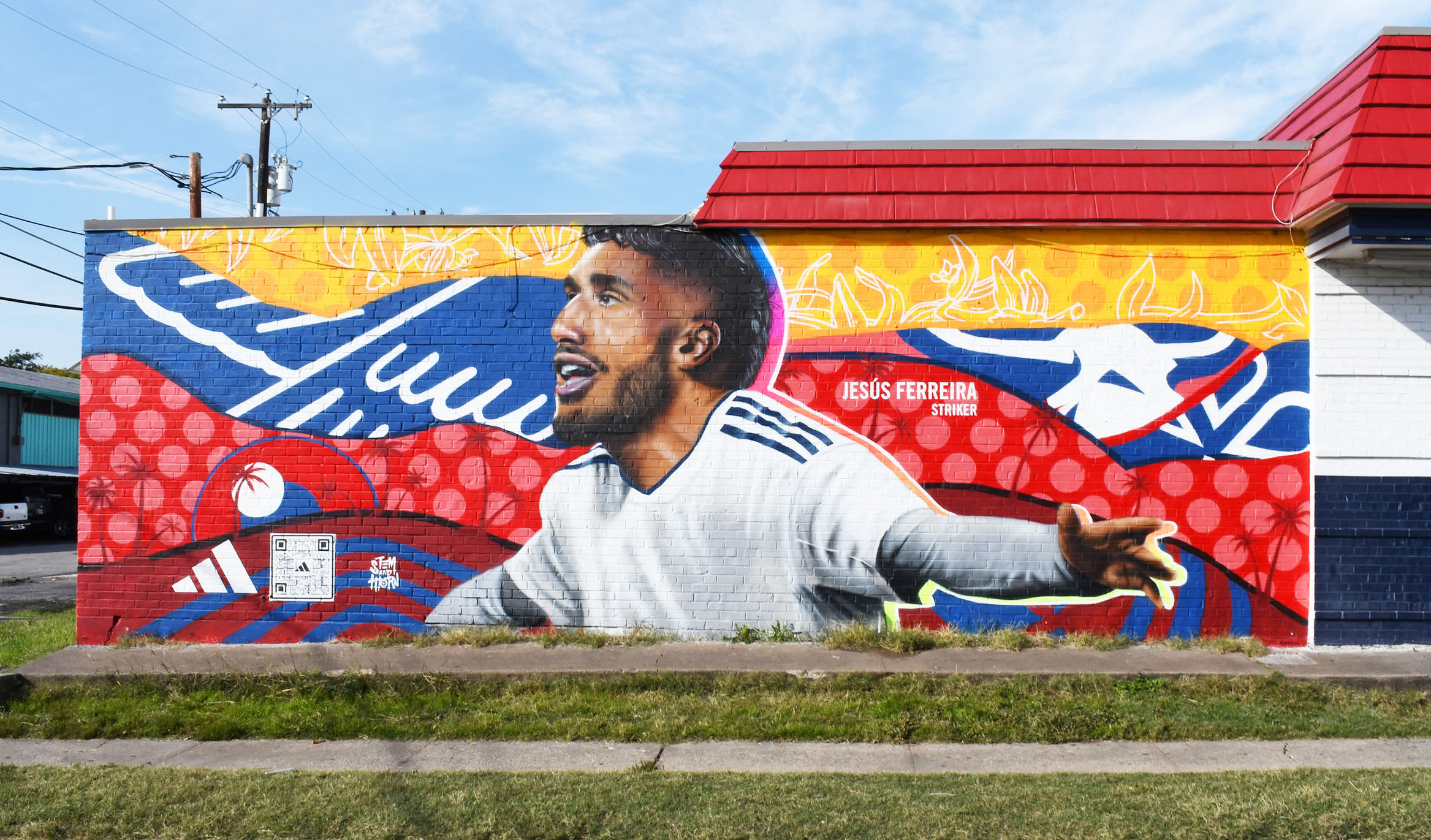 Jesus Ferreira’s mural is located at the Friendly Mart off Polk Street.

Ferreira was born in Colombia and moved to Dallas when his father, David Ferreira, was signed by FC Dallas in 2010. Except for a lone spell in Tulsa, he has been in the area ever since and is now a star forward for FC Dallas. The mural for Ferreira, canvased on the Friendly Mart off Polk Street, was designed by Dallas-based artist Jeremy Biggers. The design for Ferreira’s mural features many nods to the athlete’s upbringing and life, including using red, yellow, and blue in a nod to his Colombian heritage. 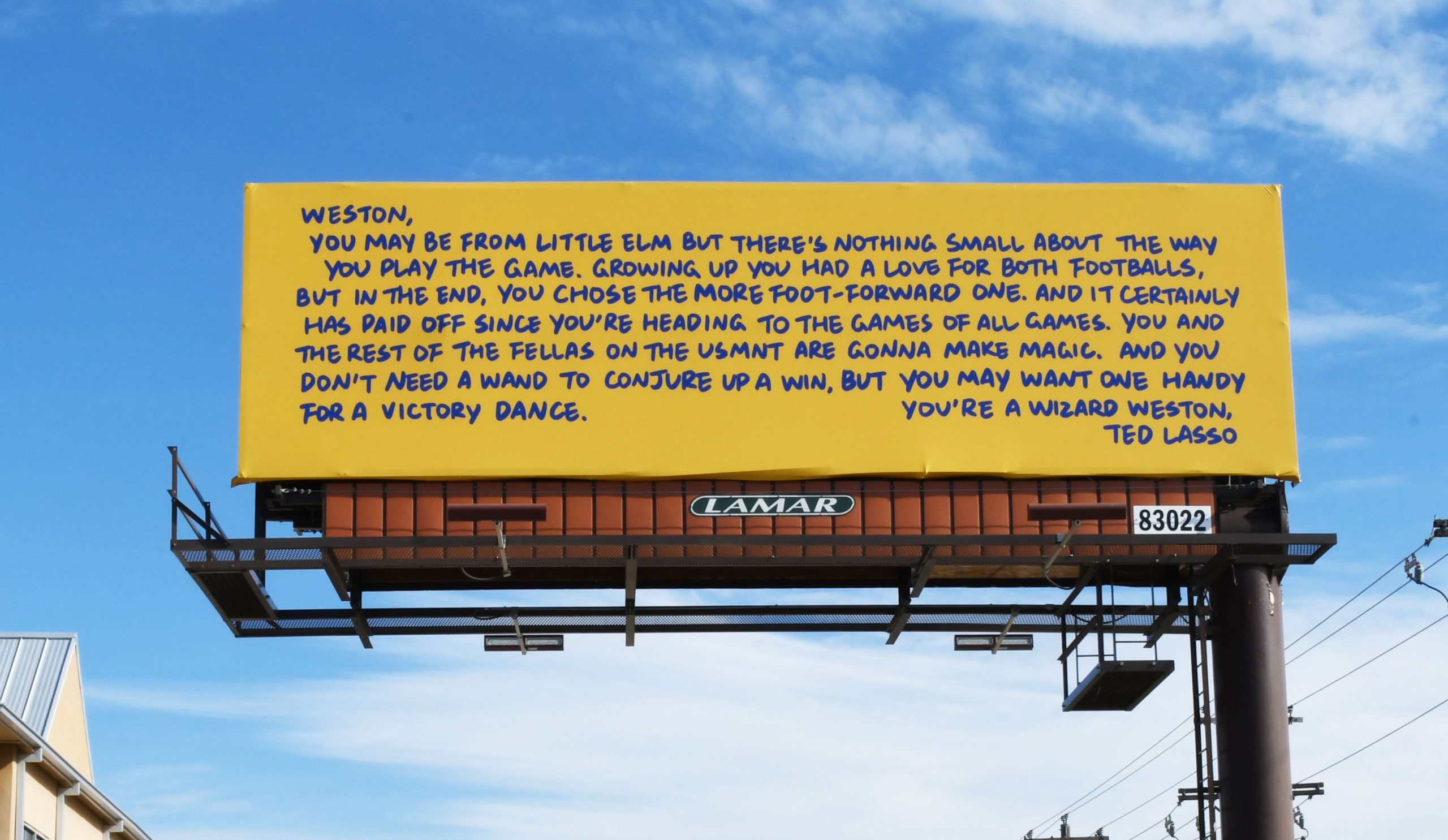 The Apple+ show Ted Lasso is represented on three billboards around DFW. Photo by Peter Warren.

Plano native Acosta debuted for FC Dallas in 2013, one month after his 18th birthday. He played with the club for six seasons and has spent his entire career in Major League Soccer. While most of the Ted Lasso billboards are located off highways and byways, Acosta’s is not actually visible from the road. It’s located at the famous Southfork Ranch, which was made popular as the setting of the 1970s series Dallas and recently acquired a new owner. Tours of the property are available, and visitors can see Acosta’s letter draped on the side of a white barn behind the Ewings’ mansion.