Long known for its charm, this Fayette County crossroads reveals a surprising personality 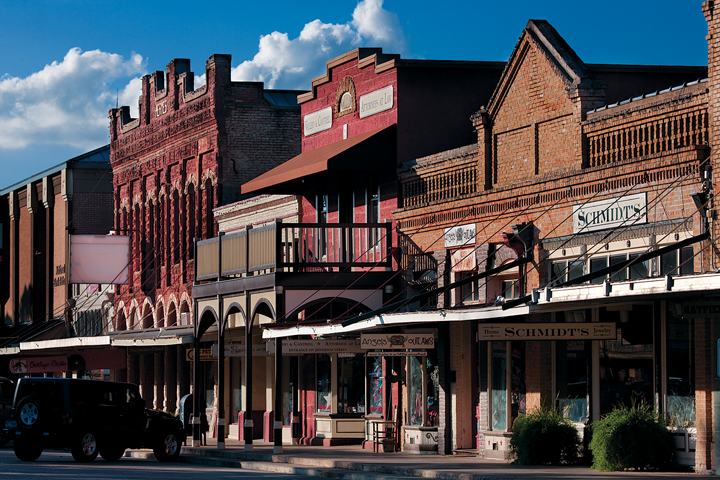 On long trips, I like to break up the drive by exploring a small town along the way. Lured by signs promising a downtown historic district, an intriguing local restaurant, or a one-of-a-kind shop, I’m apt to forgo the bypass and take the business route instead. This decision often leads to memorable discoveries, like those I made in La Grange when I stopped en route from Austin to the coast last spring. 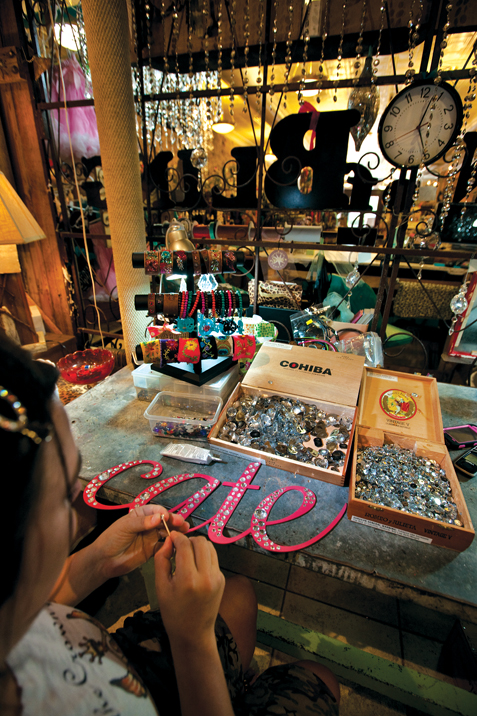 Kim Naumann, co-owner of The Shoppes on the Square (and Logos-a-GoGo within) works on an item for a child’s room.

I’d visited the picturesque Fayette County seat before, but not in recent years, so I was pleasantly surprised to find the courthouse square bustling on a weekday. The town’s beloved Muster Oak—where generations of families said goodbye to loved ones as they left to serve in five wars—still stands catty-corner from the restored 1897 M-T-K depot. And the 1891 Fayette County courthouse itself is resplendent after its own multimillion-dollar restoration a few years ago. What I found most impressive, though, was that almost all of the historic buildings lining the square remain in use, many of them renovated and housing offices and shops.

The two-story 1907 Hermes Building on North Washington Street caught my eye first. With its series of arched windows and two-tone terra cotta façade, the brick structure echoes the Romanesque Revival style of the courthouse. For more than a century, it housed Hermes Drug, the longest-operating drugstore in Texas, until the pharmacy closed in April 2009. (Its original 1855 location was a log building on the northeast corner of the square.) A display of vintage pharmaceutical equipment and black-and-white photographs fills one of the large windows, reminding passersby of the building’s turn-of-the-20th-Century past.

After studying the exhibit, I popped inside the Urban Nest, one of two businesses that occupy the space today. The interior features pressed-tin ceilings; 14-foot, rough, brick walls; and the original oak cabinetry. The historic materials provide a striking backdrop for the shop’s assortment of fine furnishings. I was immediately drawn to the contrast between old and new—a length of colorful fabric folded over the open drawer of a wardrobe, the reflection of a contemporary lamp in a beveled mirror, an array of decorative items visible behind vintage glass doors.

All around the square, I saw the same formula at work: trendy merchandise playing off the patina of historic buildings. The decor of the shops differs, as do their levels of restoration, but if you like both shopping and history, browsing a boutique with a storied past is a special treat.

South of the Hermes Building, I found a collection of 11 mini-boutiques called The Shoppes on the Square in the downstairs portion of the restored Rhode Building, the oldest business structure in La Grange. Built in 1855 by German immigrant Henry Rhode, the building’s ownership passed from the Rhode family to August Heintze in 1887. Over the years, it has housed businesses offering everything from plows and wagons to Studebaker buggies. Today, shoppers find items ranging from Round Top Natural Soap to Sgovio jewelry. To preserve the integrity of the restoration, the light-filled space has no interior walls; freestanding partitions such as old doors and shutters separate the display areas.

Attorney Luis Vallejo, whose office is on the top floor, purchased and restored the building, along with three other historic properties on the square, shortly after moving here eight years ago. Based in Houston at the time, Vallejo came to La Grange to try a case and fell in love with the region, soon buying a ranch between Fayetteville and Industry. A sixth-generation Texan (he was raised in the Rio Grande Valley), Vallejo told me later that he didn’t restore the
structures as an investment. “I did it out of my love for Texas and the history these buildings represent,” he said.

A couple of doors down from The Shoppes on the Square, I wandered into Richard Schmidt Jewelry Design in the c. 1889 Heintze Building. Here I met longtime La Grange resident Cecilia Ruckert and her friend Pug Mostyn, who was visiting from Weimar. As the three of us admired some of Schmidt’s
latest Southwest-inspired creations—heavy, sterling silver cuffs embedded with turquoise and red coral—I learned that Ruckert was a repeat customer. Her husband had bought her engagement ring here in 1964, when it was still Moore’s Jewelry. After that, Schmidt’s parents bought the business and operated it as Schmidt Jewelry until Schmidt purchased the business in 2000. His creations are sold in stores across the nation.

I ran into the women again at Latte on the Square, a family-oriented coffee house that serves wraps and panini, as well as 10 flavors of Blue Bell in made-from-scratch waffle cones. “La Grange is a great place to live,” Ruckert told me. “In a small town, people are more accountable-you get to know the people you do business with, and you get involved in each other’s lives. A lot of people who have weekend places in the area end up coming here to live.”

Retracing my steps, I headed north to check out a storefront I’d spied earlier: Le Petite Gourmet Shoppe. What? A gourmet store in a town this size? I knew the area was famous for its kolaches and other Czech and German foods, but finding an upscale kitchen store with sleek displays of European
cookware and premium baking mixes was a surprise. Owner Donella Dopslauf-Cernosek brings in chefs from Houston, Austin, and beyond to teach cooking classes and even offers kids’ classes in the summer.

My appetite piqued, I walked west to Bistro 108 on South Main, where I enjoyed a field greens salad with grilled shrimp, topped with crumbled blue cheese, apple slices, and sweet-spicy pecans; it was a winning combination with a raspberry vinaigrette. I noted that the dinner menu offered entrees such as basil-scented snapper and chicken-rosemary ravioli, as well as rib-eye steak and beef tenderloin. Chef-owners Mike Mccathern and Susan Kuehler fly their snapper, tuna, and Japanese sea bass in fresh from Hawaii and offer a wine list that complements their diverse selections. Is it any wonder that this little restaurant regularly draws customers from throughout Central Texas?

After exploring the square, it was time to go on my way, but I made another trip to La Grange soon afterwards, this time not so much to look as to listen.
My destination: a World War II Army barracks just off US 77, on the northwest side of town, called The Bugle Boy after the Andrews Sisters’ 1940s hit “Boogie Woogie Bugle Boy.” The venue opened in 2004 as a “listening room,” an intimate setting for listening to live music (blues, rock, jazz, swing, and
other genres, in this case) without the usual distractions. A large sign in front of the building proclaims, “Quiet, Please! Loose Lips Sink Ships!” The tone is humorous, but make no mistake, Bugle Boy owner Lane Gosnay means it. She feels strongly about the importance of the connection between artist and audience and will shush anyone who slips up.

I had a chance to talk to Harold Huff and his wife, Diane Donavan, before the show. They had driven from Cat Spring to hear singer-songwriter Joe Ely perform that afternoon. ”You don’t even want to talk,” Huff told me. ”You’re so interested in the music and the lyrics that the last thing you want to do is to chit-chat. We’ve been coming here for four years, and we’ve yet to see a bad show.”

As I settled into the plush theater seating, I took note of the Quonset hut’s simple decor: sage-green, plank walls halfway up, with blackout screens on the windows to keep the space dark, three gauzy panels draped beneath the ceiling, World War II-era memorabilia, and framed posters of past performers. The modest setting seemed made for Ely’s low-key, conversational stage style.

After the performance, I asked Ely what it was like to play at the Bugle Boy for the first time. “It’s a little earlier than I usually play,” he said, grinning, “but
I like the room. It has a great feel. Plus, buildings made of wood usually have great acoustics, and this one has a lot of wood.”

Hundreds of other professional musicians have performed at the Bugle Boy, including Eliza Gilkyson, Marcia Ball, Woody Russell, Guy Forsyth, Carolyn Wonderland, Janis Ian, Kinky Friedman, and Sara Hickman. February through October, the venue hosts monthly Showcase Sundays, at which aspiring artists perform in front of judges and audiences for cash prizes and the opportunity to perform in the Bugle Boy’s annual anniversary show (January 7, 2011).

A Monument to Czech Culture

I found another gem when I drove out US 77 toward the Fayette County Fairgrounds to visit the adjacent Texas Czech Heritage and Cultural Center (TCHCC). Since this area is known as the cradle of German and Czech immigration, La Grange seemed a fitting location for the site; however, the magnificence of the recently completed Library, Museum, and Archives Building—the 21-acre site’s centerpiece—took me by surprise. The multilevel, contemporary structure aptly reflects the pride that Czech-Texans have in their heritage.

The library’s holdings include more than 10,000 Czech-related books, including a nine-volume set of Czech immigration passenger lists. Not only is there
a genealogy section, but there’s a docent of Czech descent experienced in genealogy research who will help you get started. And you don’t have to be
Czech to use the library’s computers to search the Ancestry.com website for free.

The museum displays some of the many artifacts that have been donated, including a 19th-Century spinning wheel and a wooden toolbox, complete with tools, brought over from Moravia in the late 1800s. One exhibit tells the story of Czech immigrants as they settled in Texas.

“The largest influx of Czechs came to Texas between 1873 and 1905,” said Retta Slavik Chandler, president of the TCHCC board of directors. “They were true pioneers, willing to endure the surprises of unsettled land to make a new home. Some did return, but most stayed because the opportunity to eventually own land was a dream to them.”

Seven historic structures that have been moved to the site, along with twin log-cabin storage buildings, make up the Texas Czech Village nearby. Some of the buildings are still being restored, but one of them, a late-1870s home relocated from the Ellinger area, resounds with life. It houses the Polka Lovers Club of Texas Museum, where visitors can listen to polka tunes from a working jukebox as they peruse polka memorabilia displayed throughout the home.

A 5,500-square-foot amphitheater, which is used primarily for concerts, completes the site—for now. Like their hardworking ancestors, the organizers of this Fayette County cultural center have big dreams.

The discoveries I made in La Grange—a historic downtown with an uptown vibe, a listening room offering an eclectic mix of live music, and a contemporary monument to Czech culture—don’t begin to paint the full picture of this remarkable crossroads. However, they confirm the wisdom of occasionally forgoing the bypass and taking the business route through one of the state’s many interesting small towns. You never know what you’ll find.