The second race in the four-part series, taking place March 19, kicks off at River Crossing Park 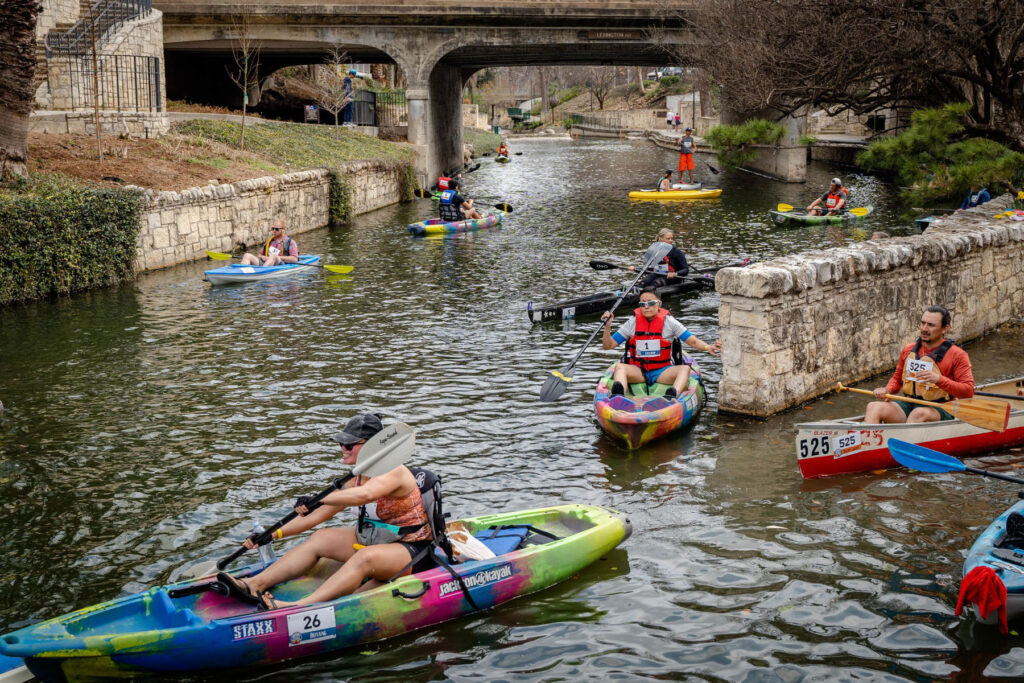 For San Antonio canoeists and ultramarathon enthusiasts Marcus Monroe and Ryan Tedrow, racing beneath the skyline of their city has been a “bucket list” item since the River Walk section opened to paddlers last year. On a sunny, early March morning, they scratched it off their list during a new canoe race, the Battle of the Paddle, that ran through the River Walk in the middle of downtown. It was the first in the four-race San Antonio River Basin Paddling Race Series organized by the San Antonio River Authority.

Because canoeing isn’t usually a spectator sport—races typically take place in long, remote stretches of wilderness—Monroe says it was cool to show off to tourists walking along the River Walk. Visitors gawked over margaritas as about two dozen boats raced underneath papel picado and through wide channels filled with dark green water.

“They hadn’t planned on being there for the race, but lots of folks stopped as they were walking to observe, take pictures, and cheer us on,” Monroe says.

Racing under the team name ’Roe ’Row Crew, Monroe and Tedrow took an easy-going approach to their burgeoning race season, finishing toward the back of the pack in a little under an hour. The fastest racers, a tandem team called Bowie Knife, finished the 5-mile course in 38 minutes.

Michael Gramley, recreation superintendent for the San Antonio River Authority, says he organized the race to help San Antonioans and other Texans learn about this underutilized water system in their backyard.

“I want them to know that’s a resource and that’s their river,” he says. “We’re always pushing for stewardship and we just want people to know what’s out there and what we provide for them.”

Although the Battle of Paddle took place in a popular tourist area, the other one-off races organized by the San Antonio River Authority will highlight downstream portions of the river. The San Antonio River Basin Paddling Race Series will pass by San Antonio’s historic mission district, through Floresville, southeast of San Antonio, and near Goliad, about an hour’s drive downriver.

Gramley says the ultimate goal is to generate enough hype for the river to combine the race segments and organize a race akin to the Texas Water Safari, an annual canoe race that runs from the source of the San Marcos River to Seadrift on the Texas coast, where the Guadalupe River empties into the Gulf of Mexico. Gramley envisions an equivalent race to attract explorers like Monroe and Tedrow to navigate the San Antonio River’s full 240 miles—which runs from a series of springs 4 miles north of downtown in Olmos Basin Park to its confluence with the Guadalupe near Tivoli—and generate excitement for the river at the same time.

Monroe says he’d sign up for such a race, as long as it isn’t in June, when racers like himself commit themselves to doing the Safari.

Wilfred Korth, the chair of Canoe Trail Goliad, says there would be challenges to designing such a race. Because the river is far less traveled than the Guadalupe, it lends itself to logjams that pose a challenge to even experienced canoeists. Like on many of Central Texas’ rocky rivers, river trips in some stretches are dependent upon flow rates, especially in the Mission Reach stretch of the river that runs parallel to San Antonio’s historic missions. (The river authority posts flow rates on its website and paddlers can also call for information.)

But the remote wilderness is also what Korth says he loves about the river.

“You may hear some traffic noise but it’s rare that you see any people so that leads to a greater opportunity of seeing wildlife,” says Korth, who’s seen kingfishers, wild turkeys, and feral hogs while paddling on the river near Goliad. “Every time I paddle on the San Antonio, I’m usually the only one on the river. I love the solitude.”

Registration is open for the other three races in the series: SASPAMCO Showdown Paddling Race and Festival on March 19, the Mission Reach Rally on Sept. 25, and the Remember Goliad Paddling Race on Oct. 8. Lengths vary between 8 and 16 miles. More information about the races can be found here.