Ridleys Believe it or Not! Sea Turtles in Texas 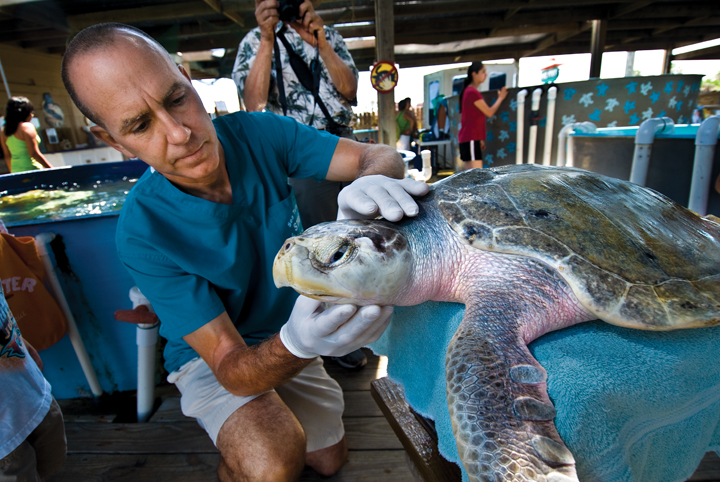 Long before human feet touched the sandy shores of the western Gulf of Mexico, tens of thousands of female sea turtles visited every summer to lay their eggs. Hatchlings emerged weeks later and scurried into the sea. After 10 or 15 years, many returned to make their own nests and repeat the cycle.
For millennia, this rhythm continued for green, hawksbill, loggerhead, leather­back, and Kemp’s ridley sea turtles. But as the coast developed in the 20th Century, life grew difficult for sea turtles. They drowned in fishing nets. People hunted and killed the turtles or ate their eggs. Development on beaches discouraged turtles from nesting. By the latter half of the 20th Cen­tury, all five of these species were listed as threatened or endangered, and by the 1970s, sightings of nests on Texas shores were few and far between. All along the coast, only the Kemp’s ridleys, once the most common Gulf species and now the most critically endangered, nested in any appreciable numbers. Nearly every one of those few hundred nests was dug on a remote beach in Tamaulipas, Mexico.

Then a dedicated international cadre of scientists, government officials, businesses, and citizens sprang into action. The Mexican beach—about 180 miles south of Brownsville—gained protection, and from 1978 to 1988, scientists took eggs from there, incubated them in sand from North Padre Island, and released the baby ridleys on the island in hope of reestablishing nesting in Texas.

In 1986, with the possibility that some of those turtles had reached maturity, Donna Shaver, Chief of the Division of Sea Turtle Science and Recovery at Padre Island National Seashore, began patrolling the beaches for signs that any had returned to nest. Shaver, along with staff and volunteers, continued to patrol for 10 years, occasionally finding a nesting turtle but none that bore a living tag—a small piece of undershell implanted in the upper shells of released turtles. Then, in 1996, Shaver responded to a report of a nesting ridley and found what she’d been looking for at last.

“I brushed the sand off her carapace and saw the living tag,” Shaver says. “I looked three times to be sure. I was ecstatic, after a decade of patrols not finding any, to finally see the first one. To know this was one I had hatched and she had come back! To me it symbolized real hope for the future, the real possibility that what we worked for all those years would come to fruition.” Until that day, scientists had only hoped that nesting could be reestablished in Texas; now they had confirmation. More turtles have returned each year since and, in 2008, 195 Kemp’s ridley nests were found on the Texas coast, 104 of them on North Padre Island.

In Mexico, several thousand Kemp’s ridleys now arrive annually between March and August Volunteers rush to collect their eggs and bring them into protected areas for incuba­tion, but simply can’t get to them all. So some nests hatch in the wild. Few people witness this magical event, which unfolds slowly, a moving drama with little sound. From a hole in the sand no bigger than a sink drain, a hatchling or two struggles out, soon followed by others in twos and threes. The turtles quickly orient toward  the surf, detouring around driftwood and clumps of seaweed, righting themselves when tossed by a wave. By the time the last one gamely swims away, up to 45 minutes may have passed.

Fortunately, you needn’t trek to the middle of nowhere for an encounter with sea turtles. They have become a major tourist draw on the Texas coast, and this tourism contributes in a big way to the sea turtle’s continuing recovery.

“Public participation is very important;’ Shaver says. “The public finds up to half the nests documented on the Texas coast each year, and it’s critical that people know what to do when they see a turtle.” Tours and hatchling releases also pro­vide important opportunities to educate people about threats to sea turtle survival and how simple changes in behavior can help protect them.

An unassuming building on the grounds of Galveston’s historic Fort Crockett houses the only federal facility dedicated to captive rearing of sea turtles. Hundreds of turtles, mostly loggerheads and ridleys a few weeks to three years old, swim and lounge in round plastic tanks. The interior remains near 80 degrees and 100 percent humidity year-round (turtles like it this way). Hatchlings (about the size of a deck of cards) arrive from the east coast of Florida in August or September; by the time they’re three years old, they’re about 12 inches across. Thirty-minute tours (by appointment only) led by staff biologists, exhibits on sea turtle nesting and tagging, and touchable skulls and shells round out the experience. Also on display: a full­sized shrimp net with a turtle excluder device and a video on how it works. Part of national and international recovery efforts, these captive-reared turtles sup­port research on tagging methods and development of turtle-friendly fishing gear. After making their contribution to science, the turtles gain their freedom. Since 1978, about 24,000 ridleys and 1,500 loggerheads have been reared, tagged, and released into the Gulf.

The Aquarium’s Conservation Cove exhibit highlights the challenges many marine creatures face, and the successes realized with some species and habitats. Its centerpiece, Tortuga Cay, provides sanctuary to four sea turtles that can never return to the wild: Hemingway, a hawks bill, and Waldo, a Kemp’s ridley, each missing a flipper; Einstein, a hawksbill deemed non-releasable after three unex­plained strandings; and Daisy, a Kemp’s raised from a hatchling. The lagoon provides above- and below-water viewing, so visitors can watch the turtles glide gracefully through the water—a mesmerizing sight—and surface to breathe and eat. The Aquarium staff rehabilitates and releases, injured sea turtles on an on­going basis. Conservation Cove also includes Otter Creek, populated by playful North American river otters; the Swamp Tales exhibit, where alligators live in a natural marsh; the new Eagle Pass, where you’ll see a bald eagle and other raptors; and regular shows at the Hawn Wild Flight Theater, featuring trained hawks, owls, falcons, and other birds.

Between May and August, visitors can attend dawn hatchling releases at the National Seashore. Once staff turn the hatchlings loose on the sand, they take about 45 minutes to reach the water, where the turtles take off like creatures on a mission—which they are. Their objective: floating sargassum beds one to three miles offshore, where they’ll feed for about a year and grow large enough to navigate the open sea, their home for 50-plus years.

Eighteen public releases took place in summer 2008, attended by more than 3,000 people from across the country and overseas. Dr. Shaver recommends checking projected release dates on the Web site, visiting when several releases are scheduled, and spending several days in the area to increase the chances of seeing a release. Baby turtles generally hatch during the night and sometimes are so active that the lab can’t wait until dawn to release them, lest the little turtles burn up too much energy for their swim to the sargassum. Continue calling the Hatchling Hotline for the latest information, and always check back the night before.

While releases are the main event, exhib­its in the National Seashore’s Malaquite Beach visitor center include models of turtle nests and emerging hatchlings, and a video on the recovery project Keep your eyes open while on the beach from March to July, and you might spot a nesting ridley. Be sure to report it immediately.

In 1977, the late Ila Loetscher, a.k.a The Turtle Lady, founded a small nonprofit cen­ter on South Padre Island to treat injured turtles. Today, Sea Turtle, Inc. continues to treat and rehabilitate turtles, giving the public a chance to see them up close. The facility offers daily informational shows and displays on turtle biology, nesting, and conservation. At 10 a.m., visitors can watch the turtles being fed. The gift shop features turtle merchandise, including a line of ceramics and coconut-shell jewelry produced by residents near the nesting beaches in Tamaulipas, Mexico; proceeds help fund ongoing protection of nesting turtles. (You can buy the ceramics at Brownsville’s Gladys Porter Zoo, too.) Sea Turtle, Inc. also patrols South Padre beaches and maintains a protected area for incubating nests. During the summer, the public can observe hatchling releases, which take place late June through late August, peaking around July 4.

Okay, it’s not quite that simple. But almost, provided your activities include visiting a place that supports sea turtle conservation.

Wherever you go, drive carefully on the beach. In Texas, report nesting turtles immedi­ately to the statewide hotline (866/TURTLE-5), and don’t approach or disturb turtles. From March through August, keep lights low in your beach condo and anywhere around the beach; too much light can discourage nesting turtles, and confuse hatch lings. Never throw trash in the water or on the beach, especially anything plastic, which can kill turtles that try to eat
it, says Donna Shaver. Pick up plastic bags, bottles, and other trash you see on the beach.

Unintentional capture during recreational and commercial fishing remains the main cause of ridley mortality, says Shaver. Choose local seafood when possible, preferably caught using turtle-friendly gear (ask if the shrimp boat uses a turtle excluder device). When boating, watch for turtles, and if you see them, slow down. If you spot turtles while fishing, move elsewhere so you won’t accidentally catch or snag one.