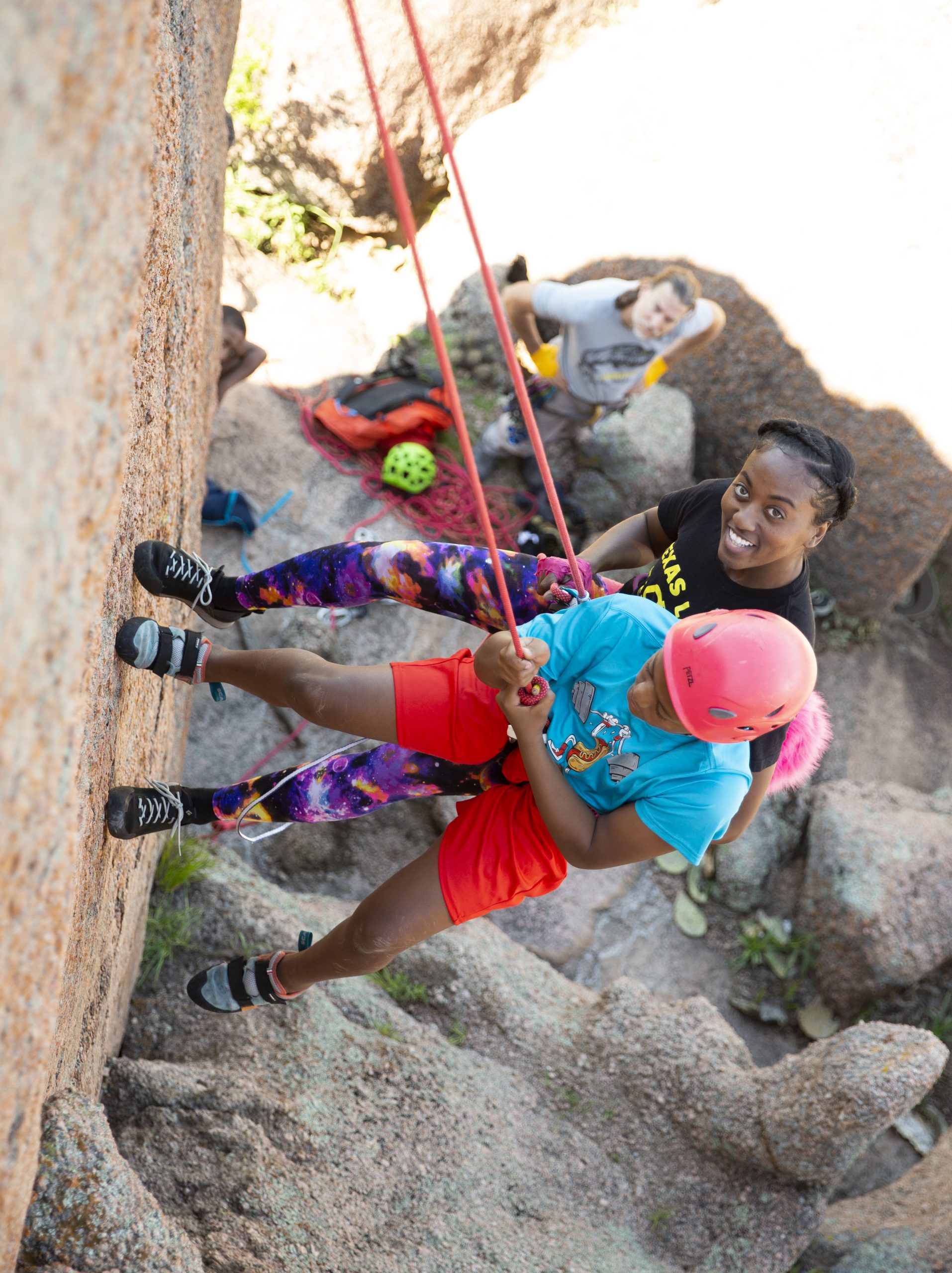 Bree Jameson and her son, Zaeden, on a route she developed at Inks Ranch called, “Gotta Start Somewhere.” Photo by Erich Schlegel

The recently released documentary J.E.D.I Training shows the life of Jameson not only as an outdoor enthusiast and activist, but also as a woman of color and, ultimately, a human being. A screening of the film takes place at Austin Bouldering Project’s Westgate location on Aug. 20, then it will be showcased at several film festivals later this year, including the Lake Travis Film Festival on Sept. 16.

When she is not spending time out on the crag or advocating for diversity, equity, and inclusion in outdoor activities, Jameson is mother to 11-year-old twin boys and working in her established career as a realtor. In addition, Jameson’s multifaceted life involves serving as the director of community impact for the Texas-based climbing group Texas Lady Crushers.

TH: How were you first introduced to rock climbing?

Jackson: [In 2019], I started looking all over for organizations and groups that could show me the ropes and teach me how to climb the right way, and I didn’t really get anyone that was super welcoming until I was pointed in the direction of a mentor in Austin. I was able to drive up from San Antonio to Austin every Tuesday and Thursday night to basically learn how to climb. I was doing that every Tuesday and Thursday night until I learned how to climb enough to start getting out with the Texas Lady Crushers, and that was how I started climbing.

TH: From what you have experienced thus far, what have been the most difficult parts of the sport as a woman of color?

Jackson: As a woman of color, there’s always uncertainty when something is different, or something is new. And I think that as a woman of color—going out into the crag, as a climber, not as a route developer—I often get underestimated. My partner is a middle-aged white male, and if we show up with new gear, folks automatically assume that it’s his gear, when it’s probably my gear from one of my sponsors. If we’re about to climb a route, and people are asking questions, I feel like folks will often ask him the question about the route when I’m probably the one that’s about to lead it or may have a little bit more experience. So, I think just being underestimated is a very common thread that I see for other women of color that are also climbers, and that happens, no matter where we are.

TH: What do you hope the film will communicate to those who watch it?

Jackson: So, this is a story about life that’s disguised as a climbing film. There are some pretty heavy themes. I get super transparent and very intimate in the film. I was very lucky to have a great production crew that made me feel super safe—to be able to get so vulnerable and be transparent. I attribute a lot of the things—those heavy themes that we were able to explore—to the quality of our production team. I mean, yeah, I guess that’s the best way that I could put it. It’s really a story about what real life is like disguised as a climbing film.

TH: Do you have a specific spot that you like to go out to for climbing?

Jackson: Well, my home wall is Medicine Wall here in San Antonio. It’s our only publicly accessible crag, so it’s kind of my favorite by default. But, if I have the time to travel a little bit further, then I probably say Monster Rock out in Spicewood. Emily Hernandez, the founder of the Texas Lady Crushers and producer of J.E.D.I Training, lives out in Spicewood. It is just always so amazing to get out there. It’s kind of like a cave and a crag, so it blends the things that I love very much.

Interested in rock climbing but find it intimidating? The Texas Lady Crushers is a climbing group that provides a sense of community, education, and support to help women and people of gender-nonconforming identities become self-sufficient at rock climbing. Founded in 2018 by Emelie Hernandez, who set out to create a safe space for members and establish a judgment-free environment, the group offers climbing clinics, retreats, and outdoor education for those new to the sport.