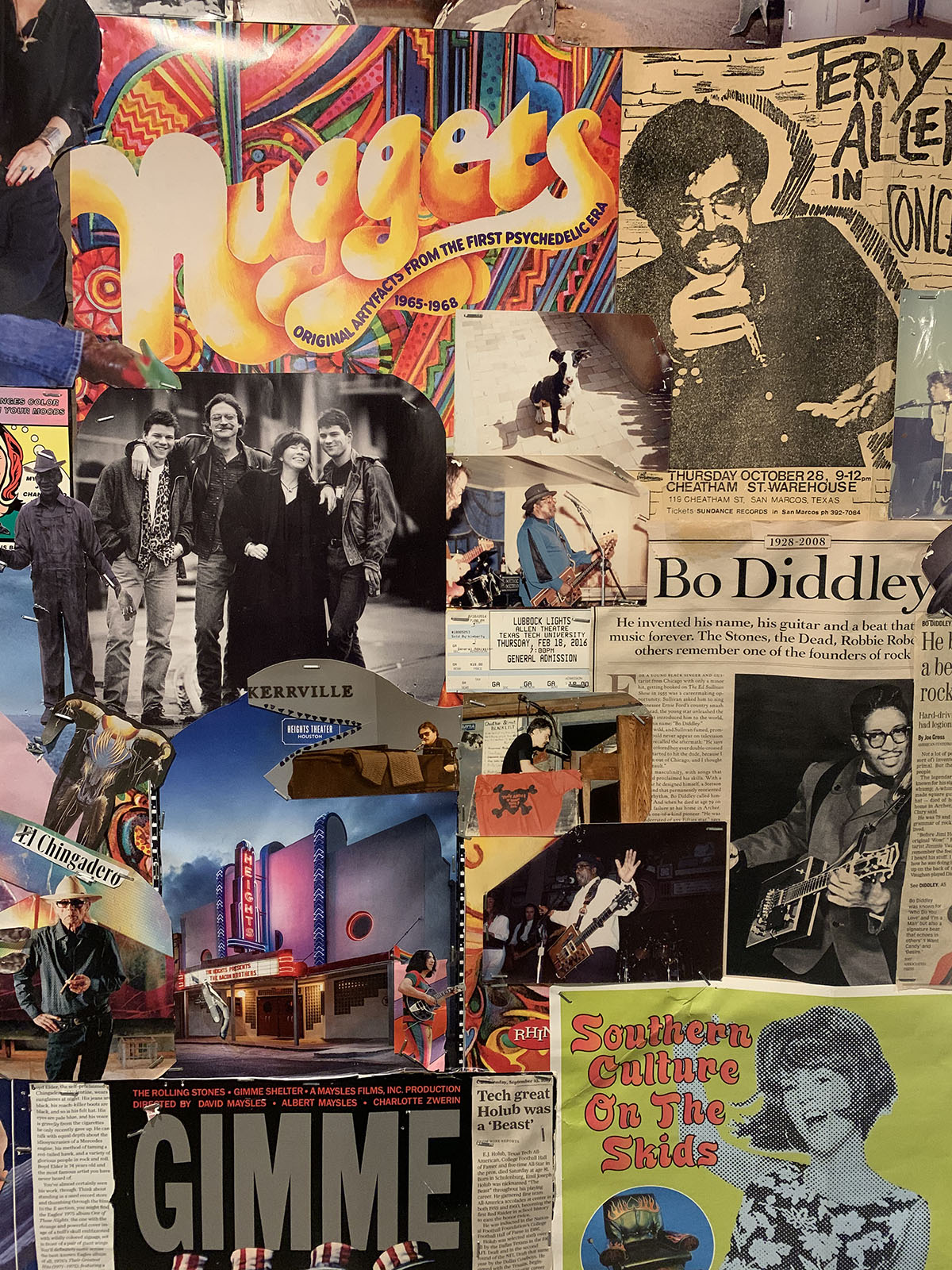 The Terry Allen collage that once adorned the walls at Sundance Records. Photo courtesy Tomas Escalante.

The appearance of a pop-up record shop outside Zelick’s Ice House in San Marcos this week is a sign of something new and completely different for the booming college town between Austin and San Antonio. Along with it being a tribute to the late Bobby Barnard, a record-collecting obsessive whose birth date is March 9, the pop-up marks the return of Sundance Records, the storied local institution that Barnard and his wife, Nancy, operated for 35 years before it closed in 2012.

On March 9, 11, and 13, the pop-up shop will be open 5 p.m.-9 p.m., selling merchandise from the record store, which formerly operated out of a retail spot on the town square before moving to University Drive near the campus of Texas State University.

Opened in 1972, Sundance was once one of the leading independent record stores in Texas, mainly because the Barnards weren’t just record retailers. They sold used records as well as new releases, along with posters and music-related gifts and tchotchkes, while offering advice and insight to the recorded music they sold.

Throughout its nearly 40 years, Sundance functioned more like a community center than a retailer. It was a place to hang and learn about music, no matter what particular grooves happened to ring your chimes. It was the portal into the depths of rock ‘n’ roll, roots, country, hip-hop, and rap. Linger long enough and an employee, a fellow customer, or the enthusiastic Barnard himself would take time to show you where the music came from and why it was so important.

When the store closed due to the rise of digital music and decline of interest in vinyl, cassettes, and CDs, the couple semi-retired to Ingram. But Barnard the record obsessive couldn’t stop. He had carefully removed all the poster collages and wall art that had covered Sundance’s interior and placed it in storage. But he had to show it again. Barnard reached out to former Sundance employee Tomas Escalante, who had opened Sig’s Lagoon Record Shop, his own independent record shop in 2004 on Main Street in Houston, on a hip block that included the Continental Club and Tacos-A-Go-Go.

Barnard asked Escalante if he could reassemble the walls of Sundance Records in the upstairs of Sig’s Lagoon.

There was some question over who was more excited about the prospect. The mentor was driven to cover walls with posters, handbills, newspaper clippings, ticket stubs, photographs, and other ephemera he’d saved from the 1970s, ’80s, and ’90s. The apprentice had the walls. Every three weeks or so, while passing through Houston hunting for records, Barnard would show up at Sig’s Lagoon, staple gun in hand, and painstakingly reassemble pieces of wall art, transforming Sig’s to look like the Sundance of yesteryear.

Each collage had a specific theme. The tribute to folklorist Alan Lomax, for example, included his obituary from the Austin American-Statesman as well as covers of recordings Lomax had made of seminal American artists. Similar tributes were made to Texas music legends like Townes Van Zandt, Doug Sahm, and Lightnin’ Hopkins, as well as a select group of non-Texas players such as Graham Parsons and Emmylou Harris. A Jimi Hendrix shrine featured a fragment of amplifier screen that Hendrix had destroyed at a concert in Fort Worth in 1968 that Barnard grabbed after the concert.

Barnard’s visits to recreate Sundance at Sig’s prompted Escalante to install a bed upstairs, so his friend would have a place to crash whenever he showed up to do the walls, which he did for nine years. Once the upstairs of Sig’s was covered over, along with the stairwell, Barnard began covering the ceiling, leading another former Sundance employee, Greg Ellis, operator of Groover’s Paradise Record Shop in Lake Travis, to call Barnard “Michelangelo with a staple gun.”

The ceiling of Sig’s Lagoon was halfway covered when Barnard unexpectedly passed away in August 2020 at the age of 67.

Nancy Barnard contacted another former Sundance employee, Parker Wright, to begin selling off all the Sundance materials that had been in storage, which stirred up considerable interest on social media, local television, and websites. But when a pair of blue jeans emblazoned with patches sold for hundreds of dollars (the buyer was confident the jeans would fetch at least $2,000 in Los Angeles), Escalante asked Nancy to reconsider selling off the estate.

He had a better idea: reinvent Sundance Records in San Marcos, so he can do what the Barnards did for him.

“My wife, Jennifer, and I both worked at Sundance,” Escalante says. “Nancy threw the baby shower for my eldest son. The Barnards changed my life. I needed to bring it back to where it began.”

Following the three pop-up shops at Zelick’s this week, Sundance Records and Lagoon will open a permanent location June 1 at 241 N. LBJ Street in San Marcos. (More information will become available when the shop launches its Facebook and Instagram pages on March 9. A website, sundancerecordlagoon.com, is also in the works.)

“Bobby’s passion is what brought all this out,” Escalante says. “He was one of a kind, and I’ll be lucky if I can do half the job he did. And Nancy is in my life again.”

And what would Bobby Barnard think of Escalante’s obsession?

“He would say, ‘What the hell are you doing?’” Escalante says, breaking into a wide smile. “I hear his voice in my head every day.” Inevitably, along with that voice, comes a whole lot of music.