Shakespeare at Winedale Celebrates its 50th Anniversary Via YouTube 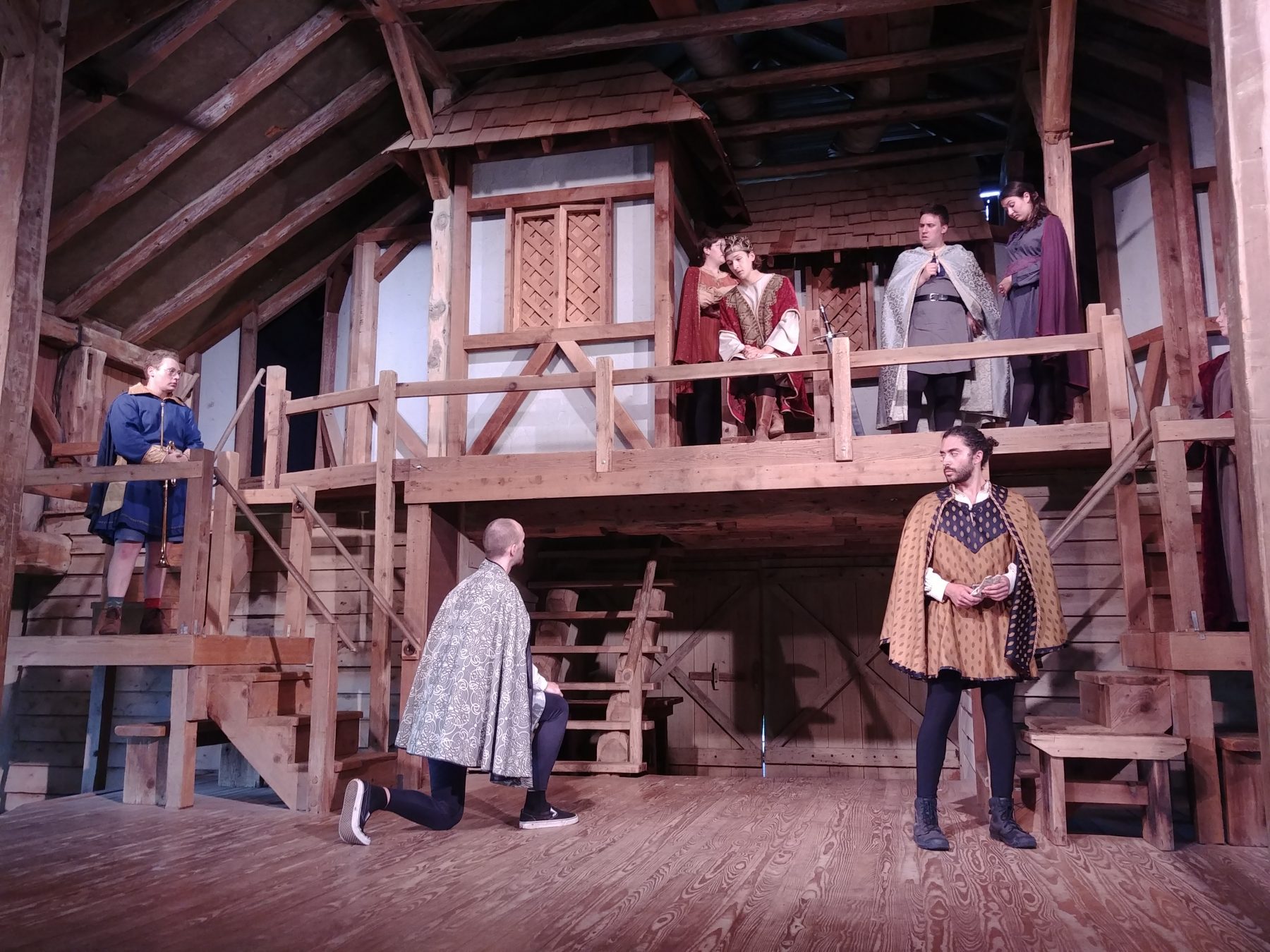 The June morning is still cool when members of the 2019 Shakespeare at Winedale summer class tackle the execution scene in Richard II. A half-dozen college students, most from the University of Texas at Austin, take their places onstage in a hay barn near Round Top that has been converted into an Elizabethan-style theater. Gus, a dog from a nearby farm who trots over each morning for belly rubs, settles contentedly onto the brick floor, his tail thumping. Outside the barn, a breeze ripples gently across the field and purple martins chatter as they wheel through the air.

Francisco Dominguez, a 25-year-old University of Texas biology graduate, strides onto the stage. As Henry Bolingbroke, King Richard’s cousin who usurps the English throne, he orders the execution of Bushy and Green, two of Richard’s supporters.

“Bring forth these men,” he begins, and then addresses the accused. “Bushy and Green … to wash your blood/ From off my hands, here in the view of men/ I will unfold some causes of your deaths.”

After listing the men’s alleged crimes, he turns to his assistant, Northumberland, played by University of Texas theater student Henry Wheatley-Rutner. “See them deliver’d over/ To execution and the hand of death.”

When the scene concludes, University of Texas English professor James Loehlin, the director of Shakespeare at Winedale, talks it through with the students. “This is definitely a Bolingbroke we haven’t seen before,” he tells Dominguez. “The way you behaved to everybody in the previous few scenes has been pretty admirable, and here you’re killing people—and being mean to them while you’re doing it.”

“My sense is that by the end of this, I’m a little fatigued,” Dominguez answers, still getting to know his character. “I’m not fully comfortable with my role of authority yet. I feel sort of burdened by it, which is what Richard later brings up: the passing of the crown. There’s so much more weight to this than I wanted.”

The group talks about how to convey Bushy and Green lose their heads, literally. Someone suggests chopping a watermelon with an axe offstage to create a sound effect. Then, perhaps, it could be served at intermission.

The students, who had been living at the property for a couple of weeks, were working on Richard II as part of the summer class of Shakespeare at Winedale, a University of Texas English program created on the premise that the best way to study Shakespeare’s plays is to perform them. The participants read and rehearse the 16th-century playwright’s work for up to 15 hours a day, culminating in a series of performances for the public.

This month, a new cast would have performed three plays in the hay barn, and Shakespeare at Winedale alumni planned to make a pilgrimage to Round Top for special events celebrating the program’s 50th anniversary. Because of the pandemic, though, those in-person events were cancelled. But the students who would have gone to Winedale this summer decided to workshop and perform all three plays via Zoom. And this weekend a series of virtual events, including a socially distanced performance of The Winter’s Tale on Saturday night, will mark the program’s official anniversary. Visit the Shakespeare at Winedale website and Facebook for more details and links to the summer class’s online performances of A Midsummer Night’s Dream, Hamlet, and Henry IV, Part I. 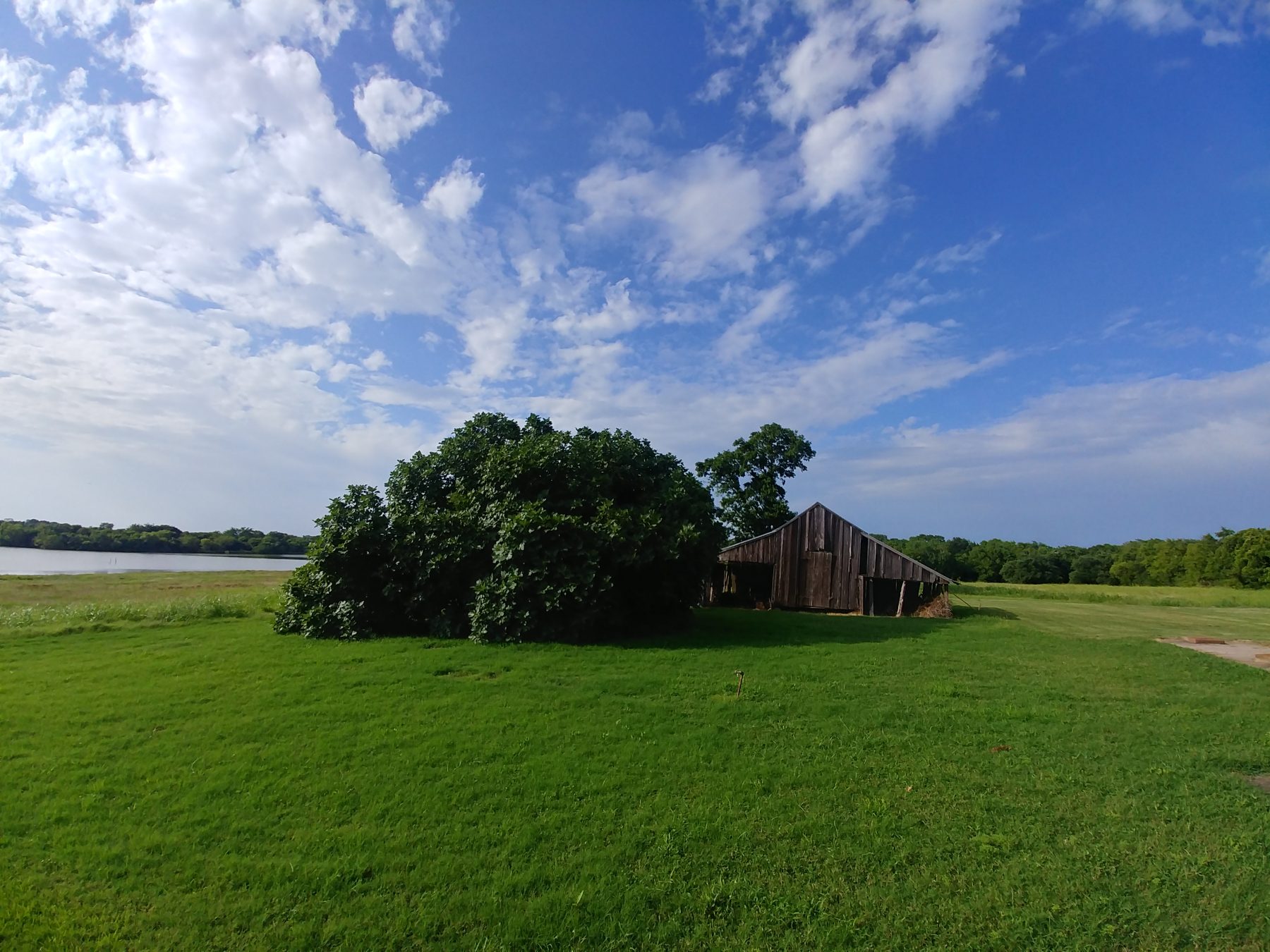 A pastoral setting near the dorm at Winedale.

Shakespeare at Winedale was founded in 1970 by James Ayres, then a professor of English at the University of Texas. (Read Clayton Maxwell’s Q&A with Ayres here.) That fall, he attended a reception at the Winedale property and met Ima Hogg, a philanthropist and arts patron, who had donated the Fayette County land and several 19th-century buildings to the university. When Hogg learned that Ayres taught Shakespeare, she sent him to look at the barn, which he told her reminded him of the Globe Theatre in London. At Hogg’s suggestion, Ayres began bringing students to Winedale, initially for several days that fall and, later, for most of the summer.

Ayres focused on helping students understand Shakespeare’s texts by working with them in the setting the Bard of Avon intended: onstage. “The plays were written to be performed,” Ayres says. “They weren’t written to be studied in a classroom or at a university.”

Ayres delighted in watching his students grasp the meaning of a passage and decide, with their fellow performers, how to convey it to the audience. “You don’t have to wait for an exam,” he says. “Over a period of three or four days, you see remarkable changes in how they relate to other people, how they interact within the play, and how they interact outside the play. And at the very end, they are not the people they were when they walked in.”

Ayres—“Doc” to his students—led the college program until 2000. That year he passed the script to his former student Loehlin, who had gone through the program in the 1980s. “It helped set the future trajectory of my life and career,” Loehlin says.

Several of the participants in 2019 were, like Loehlin, part of Plan II, UT’s liberal arts honors program, or English majors. But the class also included students majoring in engineering and the social sciences, along with several college graduates who didn’t need course credit at all. They came to Winedale to devote themselves to a single pursuit, from morning until night, in a remote location, with peers who were equally all in. Some had fallen in love with Shakespeare in high school, and a few were active in theater. But even participants like Smith College graduate Allison Paranka, who moved to Austin for its theater scene, say Winedale is more about literature and community than about performing.

“We’re not here to be great at acting, necessarily,” she explains. “We’re here to really deeply understand the text and to work together to interpret it.”

Loehlin chooses each summer’s participants on the basis of an essay and interview rather than an audition. The students begin reading and discussing that year’s plays remotely in May, and Loehlin casts the shows shortly thereafter, taking care to give everyone roughly the same number of lines. The students memorize as much as they can before arriving at Winedale in mid-June. For the rest of the summer, they stay in a dormitory across the two-lane road from the theater barn, working together every day from dawn until well after dark. 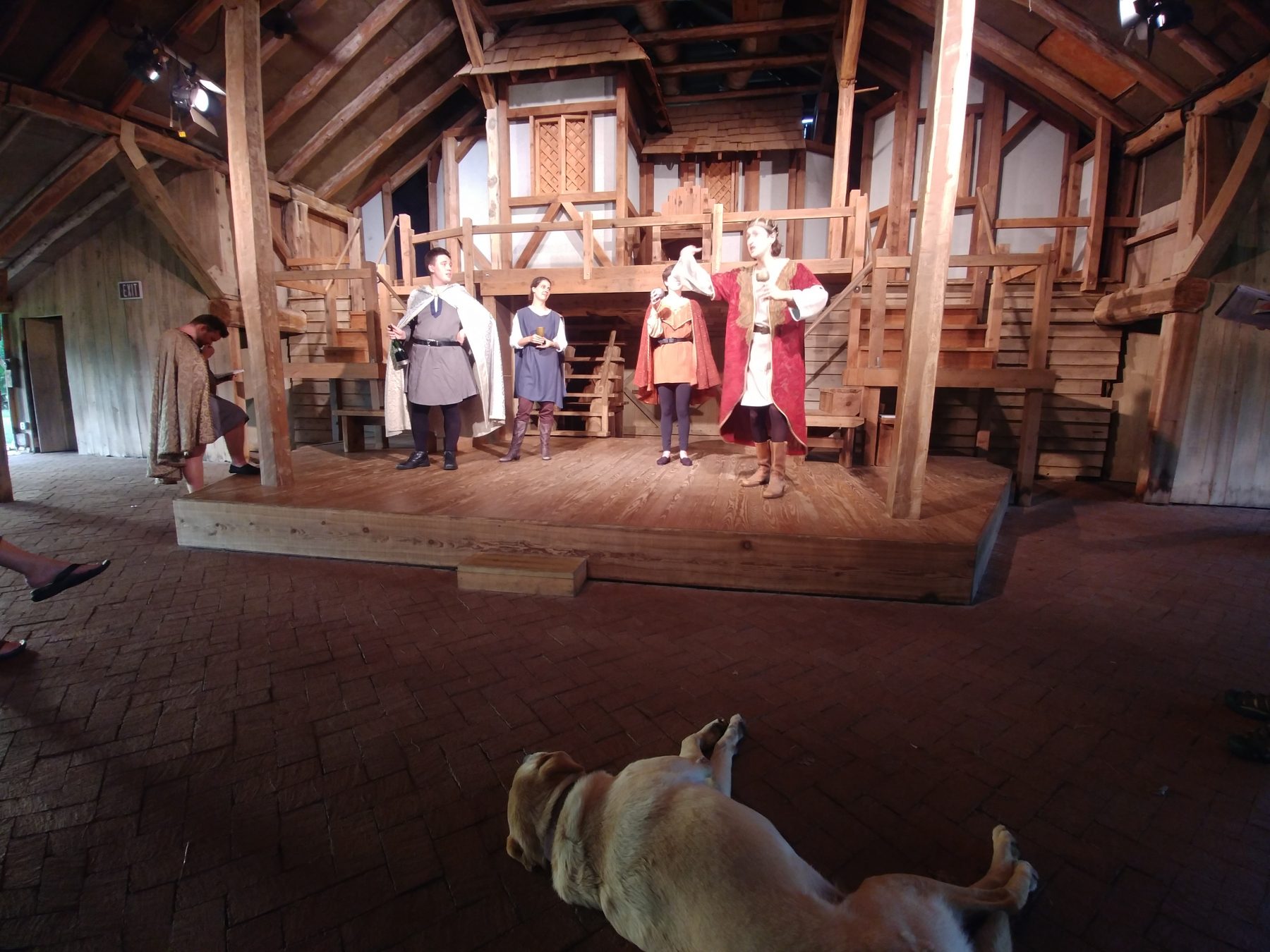 Gus, an area dog, likes to keep tabs on the action in the theater barn.

By 6:45 on this June morning, everyone had convened near the barn for ultimate frisbee in the dewy grass. Loehlin likes to wake up the body and brain with vigorous exercise; it helps build stamina the students will need to perform two shows a day in the August heat. Before breakfast the group gathered in a circle to sing a song from one of Shakespeare’s plays, a pre-meal tradition that Ayres started. After chores, the group assembled again for vocal warmups, with Gus and his canine buddy Astro rolling delightedly nearby, before breaking into groups to work on scenes.

During the heat of the afternoon, the students memorize lines or sew costumes inside air-conditioned buildings. At 5:30 they convene for their daily pre-dinner volleyball game, a good team-building activity even for the less-sporty types who turn up at Winedale. After dinner they’ll run through the show, in costume, until 10 p.m.

All the while, they’re surrounded by a deep quiet, broken only by the motor of an occasional passing pickup. Loehlin says the atmosphere, devoid of distractions like traffic and television, helps students connect more deeply with the plays. Winedale is more akin to Shakespeare’s pre-industrial world.

“You’re much more aware of nature there,” he says, “and of the weather, the time of day, and the time of year. And birdsong and deer walking across the path. And the kind of change that you feel as night comes on, or if a storm blows in.”

On the evening of the final performance of Richard II, the students walk to the barn, clad in tunics and capes. Visitors from Austin and Houston finish picnics beneath the towering pecan trees and trickle inside to claim their seats.

The setting sun casts a sheen of golden light over the trees as the play commences. The audience listens carefully, laughing over the scenes of comic relief and wincing at the execution of Bushy and Green. Darkness creeps in from the edge of the woods, where the trees stand silhouetted against the violet sky, and closes around the barn. By intermission, the weight of the day’s heat has lifted. There are no curtains and no curtain calls at Winedale. Instead of bowing, performers meet the audience outside the barn with plates of cheese and crackers, and cups of lemonade.

When Ayres ran the program, he always stayed a day after the students left. He’d sit in the theater for hours and replay the summer’s events in his head. Alone in the silence of the barn, he could still imagine the plays’ words and sounds echoing off the cedar beams.

“One student told me that the barn was magical,” he says. “You walk in and it just transforms you. That is not true. It’s a wonderful place, but the magic is within those students.”