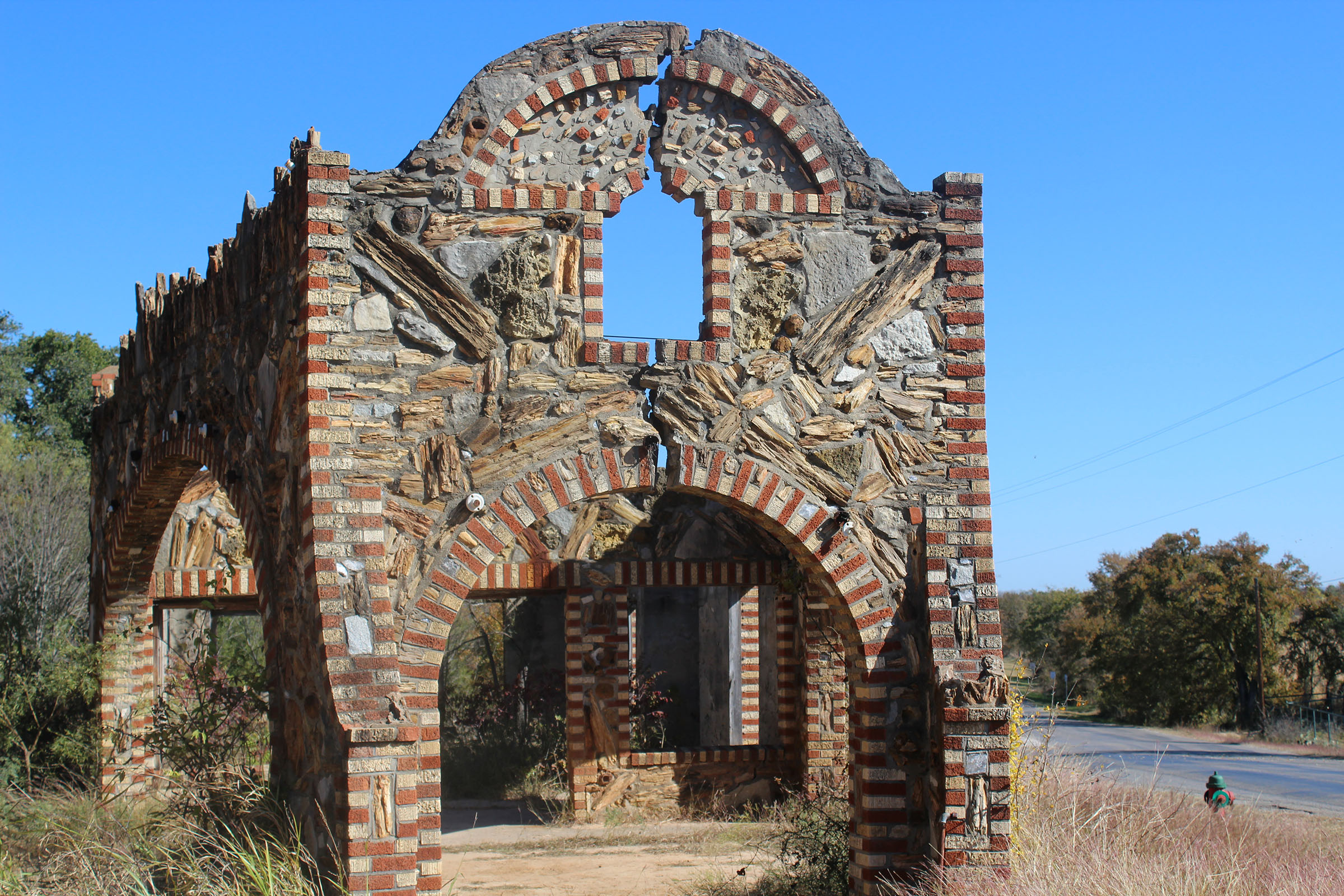 Sycamore Grove in Glen Rose is a prime example of how petrified wood was used to build structures around the town. Photo by Gene Fowler.

Tucked along the meandering Paluxy River and among rugged, low-slung limestone cliffs, the village of Glen Rose has long attracted travelers as a natural wonderland. Tonkawa and Caddo peoples, followed by Western settlers, were drawn to the picturesque valley by its healthful sulfur springs and flowing artesian wells. As the automobile revolutionized personal travel in the early 20th century—and as ancient dinosaur tracks were discovered throughout the area—tourists flocked to Glen Rose. People spoke of it as a kind of geologic paradise.

That reputation was further enhanced in the late 1920s, when local builders began utilizing petrified wood—ancient trees turned to stone—in the construction of homes, businesses, walls, wells, and other structures. The Somervell County seat soon became known as the “Petrified City.” Today, some four dozen of the stone-tree structures remain standing.

“It’s a form of grassroots folk art construction that gives the whole town a whimsical air of spontaneity,” says T. Lindsay Baker, author of the new book A Guide to the Historic Architecture of Glen Rose, Texas, with photographs by Paul V. Chaplo.

Granbury preservationist Mary Saltarelli wrote about the village’s fossilized timber traditions in her 2006 master’s thesis, When Nature Becomes Novelty: Preserving Petrified Wood Resources in North Central Texas. More than 100 million years ago, Saltarelli explained, fallen trees in the area were buried in a muddy, anaerobic environment. With the absence of oxygen, wood fibers did not decay but were instead attacked by bacteria that caused cellular deposits of silica.

“Gradually, wood fibers are replaced by silica, and the fossilizing wood begins to harden,” she wrote. The reddish-brown tone of much of Glen Rose’s stone forest is due to its high iron content, which also makes it a stronger material for building.

Farmers in Somervell and nearby counties began digging up and removing the heavy petrified wood after agricultural equipment manufacturers International Harvester and Ford made the mechanical tractor much more affordable to hardscrabble Texas farmers around 1923. By 1927, hunks of the stone trees were selling locally for $2.50 (about $40 today) per half ton, and the price had doubled by the time the petrified wood boom took off in 1929. In the 1930s, its value doubled again.

When I asked Saltarelli recently to name her favorite extant structure that utilized the unique resource in Glen Rose, I already knew the answer—Sycamore Grove. Built between 1928 and 1930 in the 3600 block of County Road 312, the still-handsome, largely intact ruin once housed a gas station/nightspot and, according to local tradition, a Prohibition-era speakeasy. So alluring is the Sycamore, with its arched parapets, petrified wood, colored stones, pebbles, and striking brickwork, that friends took offense it hadn’t yet been restored and protected when I posted images of it on social media.

But here’s the good news: Sycamore Grove was recently purchased by a preservation-minded resident. According to Ann Carver, vice chair of the Glen Rose Preservation Board, the new owner, who was unavailable for comment, plans to restore and stabilize the structure, with the intention of preserving it as a 1930-50s gas station/museum while exploring other possibilities of adaptive reuse.

Another recently resold structure, the former Shady Inn at 307 NE Barnard St., reflects Glen Rose’s unique medical traditions. Originally it housed Milling Sanitarium, built in 1912 by Dr. G. R. Milling, a long-haired magnetic healer, or “rubbing doctor,” who was arrested for everything from disturbing a religious congregation to driving his Hupmobile down Barnard Street in excess of the 18-mph speed limit. The building later received a petrified wood veneer on the first floor exterior.

In 1914, Milling was shot to death on the street by the enraged husband of a female patient. His nephew, Dr. R. G. Milling Jr., continued to operate the health clinic at the sanitarium, dubbed the spot “Where People Get Well,” in the 1940s. Its new landlords, the owners of the boutique hostelry Hotel Lucy in Granbury, have yet to set plans for the structure’s development, but the hope is to bring a family-friendly hotel concept to Glen Rose. 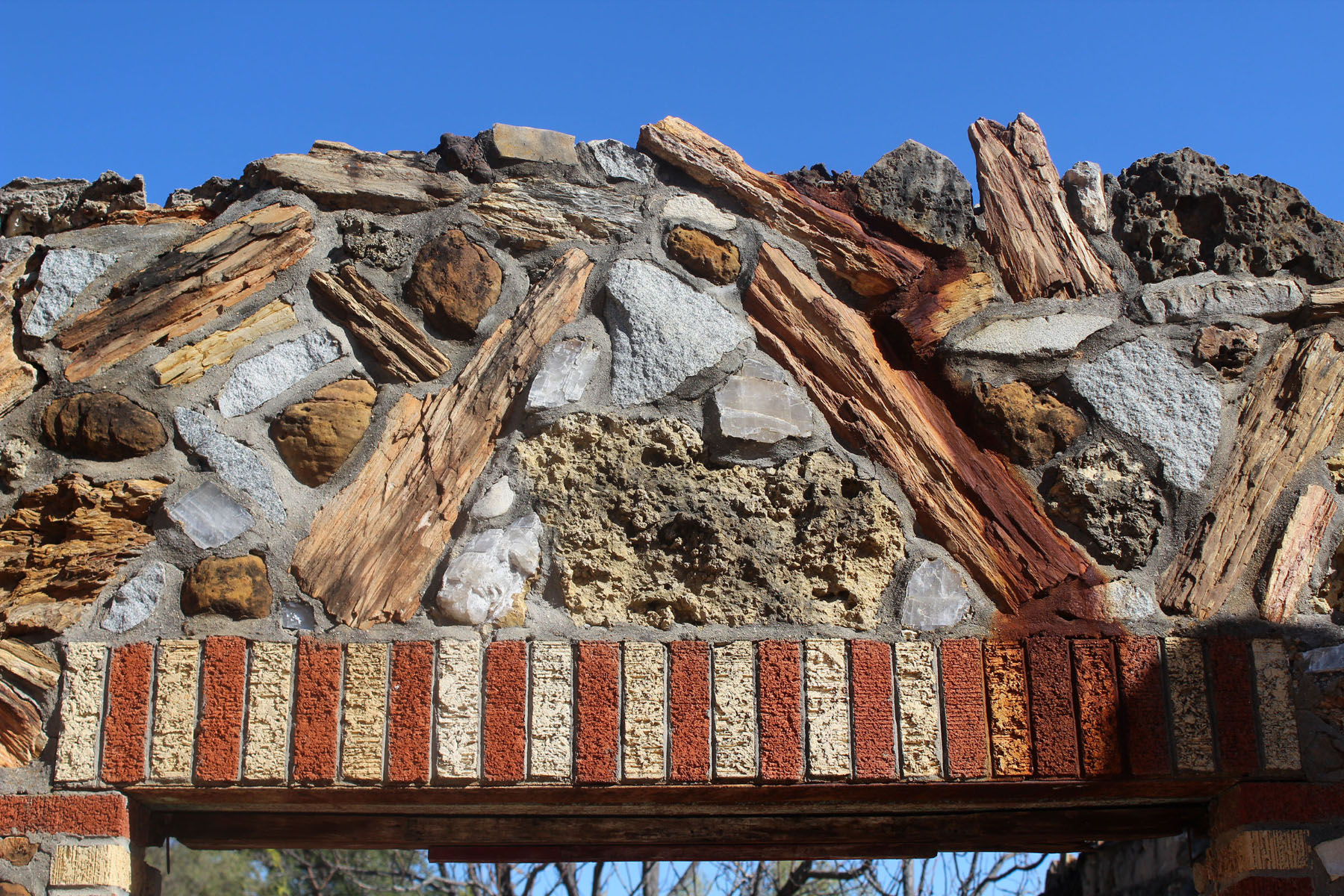 Other stellar examples of local construction with petrified wood include the former Lane and Sons Motor Company at 300-308 NE Barnard St. and the star-shaped well and bandstand on the courthouse lawn. Saltarelli notes that Glen Rose stonemason Gran Norman adorned the motor company’s walls with “heavy petrified logs laid in diagonal patterns and scattered pieces of sparkling translucent white quartz among the stone. Locals found the glinting white quartz, also known as isinglass, embedded in knotholes within pieces of petrified wood.”

Built in 1933, the courthouse bandstand was sponsored by the Glen Rose Community Band and includes one of the area’s largest dinosaur tracks embedded along its base. The star-shaped well, accented by an ammonite and other fossils, once served the local mineral water. (In 1959, Dallas Morning News columnist Frank X. Tolbert reported the fabled agua tasted like “used gunpowder,” but old-timers hanging out by the bandstand schooled him that the natural elixir was “good for what ails you.”)

At Oakdale Park, an RV resort and motor court (1019 NE Barnard St.), built in the 1920s, you can stay in one of 12 petrified-wood cabins and swim in the 310,000-gallon Oakdale Plunge pool. “The Plunge was originally dredged by teams of mules and filled with sulfur water from an adjacent spring,” says Luci DiGiorgio, who bought Oakdale Park from the city in 2020 with her husband, Phillip Vasquez. “Today we fill it with city water, which doesn’t have the sulfur content.” The couple also purchased the adjacent home of Oakdale’s builder, Henry J. Cox, which features petrified wood and a dinosaur track.

Head to the 700 block of SW Barnard Street to find a ghostly arch of petrified wood and brick that bears the name Rivercrest, a long-gone park that once stood along the Paluxy. A naturopathic physician named E.B. Earp treated patients who stayed in Rivercrest’s Depression-era petrified-wood cabins with names like Drop Inn and Creep Inn.

Many of the remaining stone-tree structures in Glen Rose are private homes that can be glimpsed by driving around the older parts of town. The fossils on Dr. W.B. Pruitt’s 1929 bungalow-style home on Northeast Barnard Street include whole petrified logs utilized as porch posts. Meanwhile, Dr. George P. Snyder’s “country home” featured extensive petrified woodwork on the outskirts of town. The more unconventional of the two doctors, Snyder was described by a biographer as a clairvoyant and faith healer—“the little wizard” and “a real human x-ray.” “The special advantage he has over the regular M.D. or even specialists is his ability to read the individual’s mind,” wrote Elna Martin in her 1927 tome, Glen Rose and Geo. P. Snyder: A Texas Town, the American Coué.

There are other places where you can find Glen Rose petrified wood. According to Charles Garrett’s 2012 book, Stone-Tree Houses of Texas, fossilized timbers from Glen Rose were used in the 1935 construction of the Petrified Forest Lodge in Austin. Demolished around 1999, samples of its wood are preserved in the exterior walls of a pharmacy that replaced the motel at Guadalupe and 45th streets and in signage at Shipe Park in Austin’s Hyde Park neighborhood. But no other spot on the map exhibits this beautiful and unique architectural tradition quite like the Petrified City.

Oakdale Park will host a book signing for A Guide to the Historic Architecture of Glen Rose, Texas, by T. Lindsay Baker and Paul V. Chaplo on June 26 from 2 to 4 p.m.