Big Luxury in the Big Bend

Experience luxury and history at these big sky stays 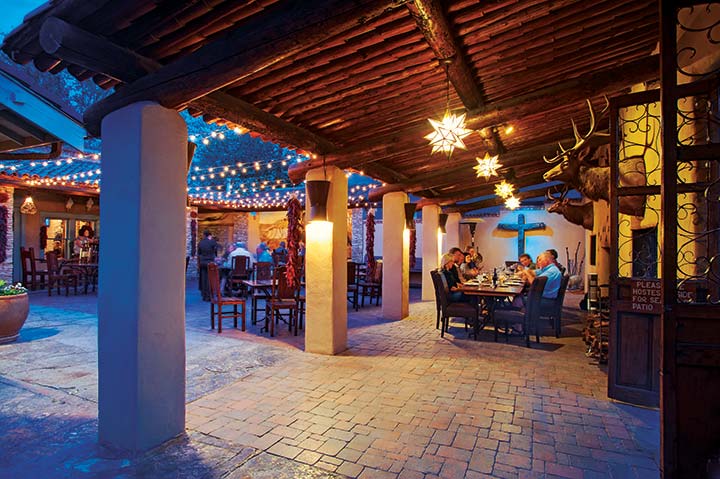 When I first began traveling to Big Bend in the late 1980s, my introduction to lodging—other than a tent in the Chihuahuan Desert—was a room at the Gage Hotel in Marathon. Quiet, rustic, and largely undiscovered back then, the yellow-brick hotel stood as an outpost of civilization on the edge of Big Bend National Park’s vast wildness.

Because these hotels are relatively small, we recommend that visitors book rooms in advance, especially if your trip coincides with a festival or other special event. Here is information for sites in the story:

The vintage hotel offered a chance to sleep in a comfortable bed and take a hot shower before I headed to the national park for a week of backpacking with friends. I rocked in the chairs on the front porch, gazed at the blue mesas where the ribbon of highway disappeared, and felt like I had found nirvana. I vowed to return to the Gage and get to know Marathon better.

Return I did with my husband, Dan, year after year. Marathon and the Gage became our standard first stop on our travels around the region. Over time, we discovered other historic lodgings and watched them take shape into worthy destinations in their own right, particularly the Holland Hotel in Alpine, The Hotel Paisano in Marfa, and Hotel Limpia in Fort Davis.

To find these four preserved and fashionably updated hotels in such a remote region continues to delight and surprise us. Each hotel looks and feels different, reflecting its hometown’s individual ambiance. And now there’s another attraction for foodies like us—on-site restaurants employing chefs who put a fresh regional spin on their menus with locally sourced ingredients.

The Gage no longer functions simply as our overnight station on the way to somewhere else. Ideally, we like to stay a few days, explore Marathon’s art galleries down the main street (US 90), sample a fried pie at Burnt Biscuit Bakery, swim in the Gage’s heated pool, and enjoy a good meal and a glass of wine.

Alfred S. Gage, a West Texas cattle baron and San Antonio banker, built the Gage in 1927, wanting a comfortable place to stay while tending to his regional ranching interests. He hired the prolific El Paso architect Henry Charles Trost, who would also design the Paisano, the Holland, Hotel El Capitan in Van Horn, and dozens of El Paso buildings, including the 1912 Camino Real Hotel.

The Mission-style Gage sparkled as the town’s social center where locals dined, danced, and cut business deals. By the 1970s, though, the once-grand Gage had been remodeled so many times that its linoleum floors cracked and layers of paint had built up on the woodwork. In 1978, Houston businessman J.P. Bryan and his wife, Mary Jon, who own the sprawling Chalk Draw Ranch on the edge of the national park, bought the hotel for a mere $30,000. Bryan tracked down the Gage’s original plans and embarked on a restoration project.

More than three decades later, the Gage again bustles with people. “The hotel continues to evolve—you have to do that if you want to continue to attract greater numbers of people and keep up their enthusiasm,” Bryan explains. “In recent years, we wanted to give it more of a feel of a resort. But we also want guests to share in the mystery and adventure of the country that surrounds the hotel. That’s why they keep coming back.”

Along with the 27 acres of native landscaped gardens, and plans for a new Visions of the West Museum scheduled to open in 2016, the Gage also offers a fabulous setting to unwind with dinner and drinks. We peruse the menu at 12 Gage, headed by chef Brandon Waddell, and start with Texas quail with a blue cheese, almond, and cherry stuffing, port wine reduction, and sweet corn fritter. Entrées such as beef tenderloin and honey Dijon-marinated white rabbit tempt, too, but the tenderloin of hazelnut-crusted elk with a pinot noir reduction and parsnip maple purée reigns as the must-have dish for carnivores, in my opinion.

After dinner, we cross the courtyard to the White Buffalo Bar—named for the head of a white buffalo mounted on a wall—with its leather seats and viga-post ceiling. The bartenders pour Texas tequila and wines, beer, cocktails, and such signature drinks as the Texas Martini with Tito’s vodka, jalapeño, and olive juice. 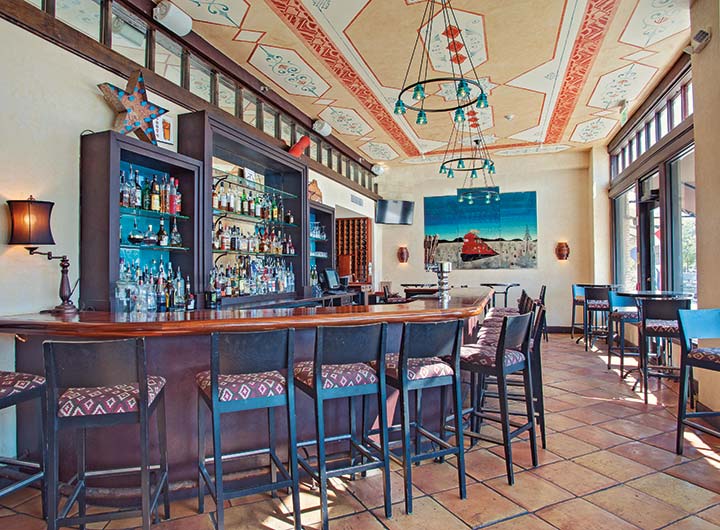 We find this same strong sense of place when we arrive at the Holland Hotel in downtown Alpine, about 30 miles west of Marathon. Another Trost architectural masterpiece, the Holland was built in 1928, one year after the Gage. Trost wanted his hotels to blend into the landscape and called the desert buildings his “Arid America” style. The Holland certainly looks like it belongs in Alpine with its Western flavor—arched doorways, wooden beam ceilings, stucco walls, and stone fireplaces. A 2011 restoration of the Holland’s 24 guest rooms stayed true to the theme, as represented by the rooms’ warm colors, custom bedding, and paintings of West Texas scenery.

The restored Century Bar and Grill features an airy and intimate space in the main dining area, the Rio Grande Room, with a tile floor and wrought-iron chandelier. The bar, its ceiling painted colorfully with Western patterns, features broad windows looking out over the action on Holland Avenue and the railroad tracks.

When the weather is mild, the hacienda-style courtyard beckons with potted cacti and a burbling fountain. The menu ranges from salads—go for the eight-ounce rib-eye steak salad garnished with Texas goat cheese and dressed in a tangy, roasted red onion vinaigrette—to entrées like burgers, beef tenderloin, and pan-seared rainbow trout. In late 2014, the restaurant hired a new executive chef, Amaury Torres from Santa Fe; we look forward to returning and sampling his cuisine.

Another Trost-designed hotel awaited us in Marfa, home to the Big Bend’s most dynamic art scene, one of the world’s largest art installations at the sprawling Chinati Foundation, and the ever-mysterious Marfa Lights. Designed in Spanish Revival style, El Paisano opened in 1930 and drew cattle ranchers buying and selling herds, as well as tourists seeking the dry desert air. 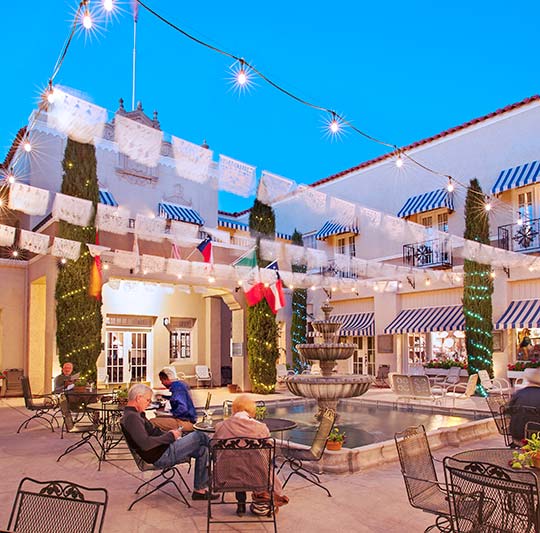 Now called The Hotel Paisano, the hotel is renowned as the lodging for the roughly 150 cast and crew members who came to Marfa for the 1956 filming of the classic film Giant. Director George Stevens set up a projector in the hotel ballroom to watch the daily footage along with the stars, which included Elizabeth Taylor, Rock Hudson, and James Dean.

The hotel changed hands over the years, and was eventually abandoned. Joe and Lanna Duncan bought the hotel in March 2001 in an auction on the steps of the Presidio County Courthouse, and embarked on a restoration project, completed in time for the hotel to reopen in November of that year. The original 65 rooms have been converted to 41 larger rooms,
which recall as much as possible the original fixtures.

A Giant memorabilia room sells Dean T-shirts, copies of the Edna Ferber novel that inspired the film, and re-creations of original key tags with the actors’ names and room numbers. You can even sit down and watch the movie. The Giant theme continues at the restaurant, Jett’s Grill, where beef stars on the menu. Try the pistachio-fried sirloin with jalapeño gravy or the 12-ounce Black Angus burger, called the Giant. 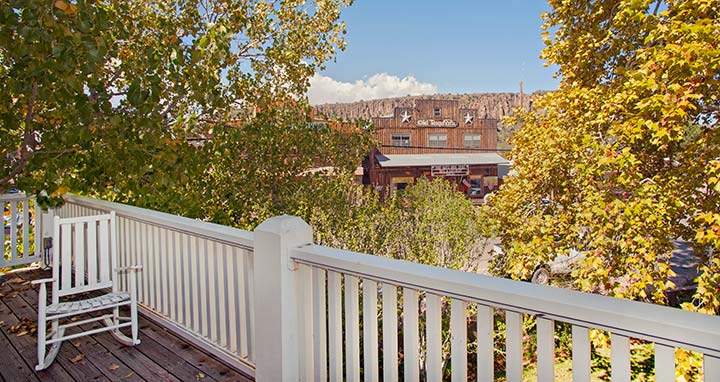 Dan and I have spent many pleasant evenings camping in Davis Mountains State Park with deer sleeping around our tent and javelinas rustling in the grass. But we often get our fill of roughing it and end up at Fort Davis’ Hotel Limpia, the end of the trail for this Big Bend jaunt.

With its long porches and backdrop of rugged cliffs, the Limpia looks like an extension of the nearby Fort Davis cavalry outpost. Campbell and Bance Contractors built the hotel in 1912 of locally quarried igneous rock and white wooden trim.

As with the other historic hotels in the region, the Limpia eventually grew outdated and needed a boost. David and Ana Schreiber, who already owned the restored 1883 Veranda Inn down the street, bought the Hotel Limpia in 2011 and continued restoring the hotel to its Victorian roots. They installed real wood floors, tore off old wallpaper, and returned the walls to stucco. The original main building, with 13 rooms and suites (the Limpia complex has 31 rooms total), takes guests to a bygone era with 12-foot-high ceilings of ornamental pressed tin and elegant furnishings, such as silk curtains, gilt-framed mirrors, and four-poster beds.

Dan and I like to sit in the courtyard garden, which in the spring and summer smells of roses and herbs, or in the rocking chairs on the hotel’s expansive porches. “It’s a peaceful, tranquil place to enjoy nature and still have a comfortable bed in a funky little old Victorian hotel,” David says. “You don’t have to rough it if you want to experience wilderness.”

The Schreibers opened the hotel restaurant, the Blue Mountain Bistro, in 2012. David functions as executive chef and wanted to create a casual dining experience that also incorporates some of the influences from the couple’s travels around Europe. The bistro serves tapas and “basic, simple French country fare,” such as the popular beef bourguignon. Locally sourced food comes into play, too. Village Farms greenhouses grow the tomatoes in Fort Davis, and apples come from the hotel’s own trees. The restaurant’s cheese board also features goat cheese from the Marfa Maid Dairy, when it’s available. “Sometimes the goats have to take a vacation,” David says with a laugh.

So do we all, and discovering an oasis of laid-back luxury in the midst of such wildness makes us appreciate it all the more. We sleep in these places steeped in history and wake up knowing that the adventure and mystery of this country lie just outside the door—and will draw us back again and again.