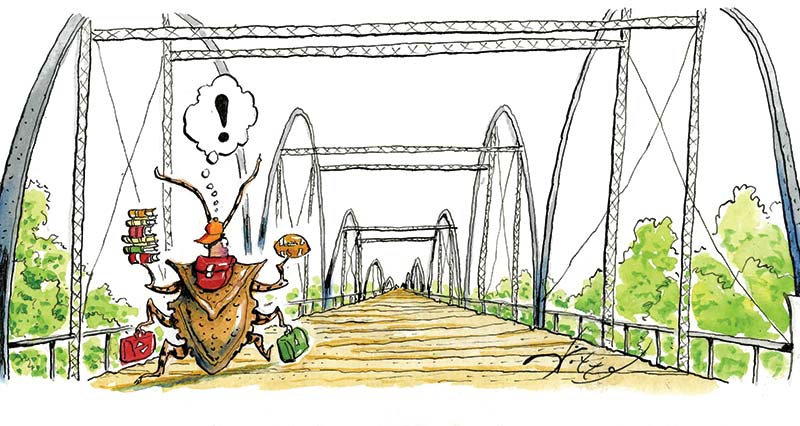 One of many reasons that I like to take car trips with my son is that they never fail to inspire conversation. As anyone who has ever raised a teenager knows, anything that will get one talking is to be treasured. And while my relationship with Elliott has always been close, something about being on the road inspires camaraderie different from our usual mother-son rapport.

Recently, halfway through his tough senior year of high school, my son has been more silent than chatty. Perhaps that’s why I found myself remembering a road trip to the Panhandle town of Canadian a couple of years back, that provided a sort of mobile therapy for us both.

We took our time arriving. Panhandle roads are often ribbon straight, but to avoid the mile-long trains that are the region’s most reliable speed bump, we rerouted ourselves frequently with no thought of efficiency.

At Pampa we ran into legions of Spanish Dagger. I reminded Elliott that he once called them upside-down palm trees. Miraculously, he did not roll his eyes, but allowed me    that happy baby memory. Still engaged as we passed into Hemphill County, he was inspired by the road kill count to raise a truly existential question: If all the turkey buzzards were killed, what would clean up their carcasses?

When we attempted to identify some animals huddled in the distance, Elliott insisted they were donkeys. I disagreed. “Well, there’s always one jackass,” he said in the spirit of compromise. I still think he was on to something.

We found Canadian a remarkably busy small town, abuzz with construction and vehicles. Yet, it felt somehow undiscovered, a hidden river valley gem blessed with lovely views in all directions and the sort of charm that attracts artists to places like Santa Fe and Sedona. I remember, too, that it had a sweet, earthy feedlot smell that I associate with Stock Show week in Fort Worth.

We spent some time wending about the Gene Howe Wildlife Management Area, best known for spring viewings of Lesser Prairie Chickens, and made a stop at headquarters (registration allows you access to side roads). We spotted a Rio Grande turkey in full strut and a few prairie dogs, but nary a chicken.

There was a Devonshire softness to the prairie swells—especially in the gloaming—that made us think of hobbits in their natural habitat. Now, when my son and I are having a day grown tense around discussions of college plans or test scores, I remember that day outside Canadian, when the leaves of the cottonwoods waved us along with their silver dollar shimmer. I remember that golden afternoon and I know the world will right itself for him one day soon.

We ended our Canadian weekend with some exercise before loading up, and did what the locals do when they need to stretch their legs: head to the edge of town and walk the bridge. The Canadian River Wagon Bridge was constructed in 1916 to a length of 2,635 feet. When the river changed course in 1924 the bridge was lengthened to its current 3,255 feet. Considered the longest metal truss span in the state, it is truly a bridge to nowhere, a favored spot for strolling with binoculars. Alone there, as we were that day, the bridge became a long, wood-planked stretch of splendid isolation. As we walked, the drone of wasps and cicadas grew hypnotic. Elliott trotted ahead, then excitedly returned to announce, “It feels like it never ends.” I was thrilled when he begged me to join him for a closer inspection of a giant spider web glinting silver in the sun.

The once mighty Canadian River appeared near the far end of the bridge, a muddy S-turn moving swiftly only in a narrow channel, while lazier waters rippled across sandbars. Everywhere the natural world, from spinning spiders and dustings of rust to nesting wasps and birds, was making a claim on the manmade structures. Beneath the bridge, swallow nests like adobe cliff dwellings reminded me that humans carved out shelter along the bluffs of the river in the early 12th Century.

When Elliott graduates, before he launches, we will steal some time for an adventure that I hope blesses us with the joy we shared that weekend in Canadian. As he prepares to set out on his life’s journey, I will remind him of an observation he shared with me on the bridge. We had stopped for a rest. It was hot and the car seemed a long way away. He wandered over to eye a stink bug. He stared at it for a long time, glanced toward the end of the bridge, looked down again. He called me over and offered words of encouragement. “Think,” he said, “what this walk would be like to him.”