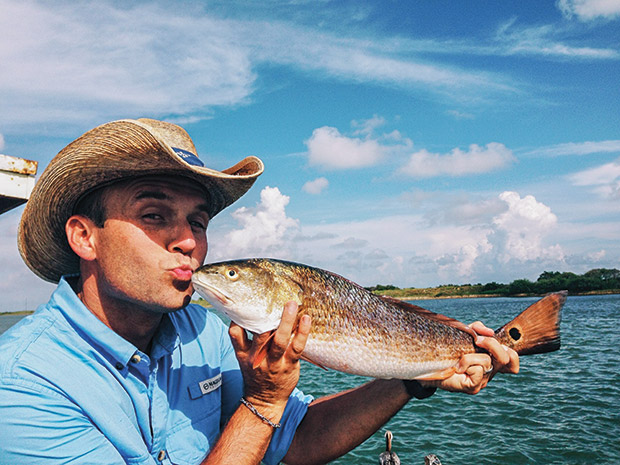 The vastness of Texas is no secret, but many don’t realize that within its “hugeness” lies more than 360 miles of coast and an astonishing 3,300 miles of tidal shoreline.

And hidden in these miles are dozens of under-explored communities that thrive in the briny breeze of the sea. Like finding a flawless shell along an untouched beach, I found an amazing day trip in the coastal town of Port O’Connor.

6:00 a.m.: Motivated by visions of giant fish dancing in my head, I awoke before dawn to rendezvous at Froggie’s Bait Dock with local fishing guide Captain Mike Bohac. I came prepared with plenty of coffee, but all it took was one deep whiff of the fresh bait tanks and I was ready to go. Nothing like the smell of shrimp in the morning!

6:30 a.m.: We loaded up on essentials (water, ice, and bait) and headed out. Before long we were navigating a maze of jetties and canals surrounded by expansive wetlands. I would have dropped hooks anywhere, but the good Captain had his sights set on Pringle Lake, a small saltwater estuary off Espiritu Santo Bay. As soon as we cast our lines, I found out why. Within minutes I was wrestling a Texas redfish from the water, and for the next few hours Mike and I yapped about life on the coast and pulled in one red drum and speckled trout after another. With an ice chest full, we pulled our lines and headed back.

10:30 a.m.: Before docking on the mainland, we stopped at Matagorda Island National Wildlife Refuge to visit the 1852 Matagorda Island Lighthouse. This 56,000-acre wilderness was once a state park, but has since been turned back over to nature. After trudging through 2.5 miles of sand and overgrown grass, I stared up at the cast-iron stalwart, thankful that it’s still standing tall and amazed at the isolated lives led by former lightkeepers.

1:30 p.m.: Rather than eat my morning’s catch as sushi, I brought it to Josie’s Mexican Food, where cooks turned it into a mouth-watering platter of grilled fish and seasoned vegetables. It made for some amazing tacos, but best of all was the primal enjoyment of knowing I had caught my own food.

2:30 p.m.:. While fishing is this town’s most popular pastime, there’s much more to do on the water. I rented a boat from Dolphin Kayak and headed into the bay, where I spotted countless pelicans, gulls, and even an osprey. But then, without warning, a single fin broke the surface, inspiring one thought—SHARK! Before I could paddle to shore in fear, I saw another fin and realized I was surrounded by a pod of bottlenose dolphins. Despite my best Flipper impression, in an instant they were gone. I spent the next few hours wandering among the reeds and wondering what might lie around each bend.

6:30 p.m.: Back on shore, I drove the town’s few streets and found myself at King Fisher Beach staring east toward Matagorda Bay. The light of the setting sun cast shadows across the waves as birds performed an aerial show diving into the water for their dinner. Which reminded me that I was due for dinner myself.

7:30 p.m.: A full parking lot is always a good sign, so I joined the masses at Cathy’s Restaurant. Glancing across the full tables, I knew instantly that I was going to enjoy a golden-brown platter of fried food deliciousness.

My plate arrived overflowing with shrimp, fish, hush puppies, and fries, and it struck me as an appropriate finish to a day that overflowed with all the salty joys of the bay. There are many miles to explore out here, and this was just one of many coastal adventures to come. So whether you follow my footsteps or forge your own path, I hope to see you on the road.