A Wild Time in San Angelo 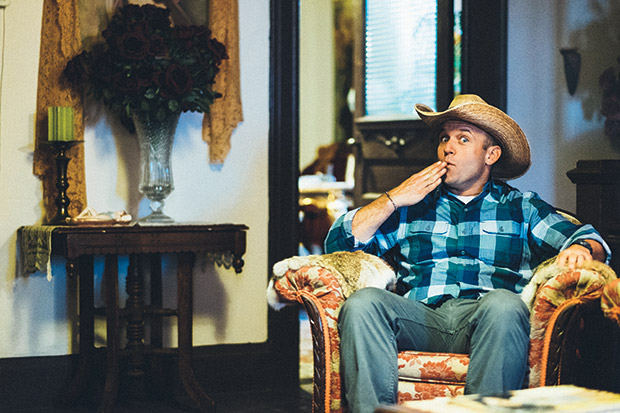 On a map, San Angelo sits somewhere between the Hill Country and West Texas. But what the map doesn’t show is that this town also lies between its epic past and a bright future. I quickly realized that when tripping to “S’nangelo” or “Angelo” (as the locals call it), one must always come prepared with an appetite, boots, and a wanderlust to explore.

9:00 a.m.: To start my adventure in the “doorway to the West,” I headed to Donutopia’s magical wonderland of circular sweets topped with everything from bacon to breakfast cereal. After much debate, I opted for a fresh-from-the-oven cinnamon roll prepared like a peanut-butter-and-jelly sandwich. It was truly donut utopia.

10:00 a.m.: Next, I made my way to Fort Concho. Built in 1867 on the lonely Texas frontier, this Wild West fort is now in the middle of town, as it was the fort’s protection that allowed the city to grow around it. Walking through the buildings transported me back to the days of soldiers, cannons, and mounted cavalry. It felt like the bugle could sound and ready the troops for battle at any moment.

12:00 p.m.: Crossing the Concho River en route to downtown, an old truck covered in paint and mosaics caught my eye. I pulled over and found myself walking the Concho River Trail, where amazing sculptures, murals, and mosaics enhance the natural beauty of the river. Before I knew it, I had wandered a mile down the trail, which made for an easy and artistic way to get some exercise.

1:00 p.m.: I arrived on Concho Avenue and noticed painted sheep statues all around, which is fitting for a town once known as the “Wool and Mohair Capital of World.” I also noticed multiple buildings bearing the name “Miss Hattie’s” and decided to investigate Miss Hattie’s Bordello Museum (pictured above). Our tour guide led us upstairs and into an apartment-like studio that was once San Angelo’s busiest “house of ill repute”—until the Texas Rangers shut it down in 1950.

2:30 p.m.: I walked downstairs to a heavenly aroma originating from Miss Hattie’s Restaurant and Cathouse Lounge. Though the walls are covered with women’s undergarments, it’s one of the town’s best burger joints. I chowed down on a “Brothel Burger” with bacon, jalapeños, and roasted red peppers. It was sinfully delicious.

3:00 p.m.: I had already found more than expected in San Angelo, but the Concho River pearls at Legend Jewelers really surprised me. I perused the lavender pearls, each with a distinctive hue and character, and marveled that these gemstones came from Tampico pearlymussels found in the murky waters of the Concho River. Local jewelry shops get the pearls from the handful of licensed commercial musselers permitted to collect them.

4:00 p.m.: Since I’d spent enough time looking at women’s clothing and jewelry, I decided it was time to do something more macho. I grabbed my mountain bike and headed to San Angelo State Park, home to part of the Official Texas State Longhorn Herd. The park’s 50 miles of trails led me through dirt, dust, and cactus as I spent the next few hours admiring the wide-open spaces and expansive West Texas sky—and trying not to crash face-first into a prickly pear.

8:00 p.m.: My appetite was back, and I knew the perfect place to relax and enjoy the rest of the evening—The Concho Pearl Icehouse. This rockin’ restaurant sits inside of a renovated gas station building and serves up “Texas eclectic” food with a hip vibe, live mu-sic, and plenty of craft brews on tap.

I dug into my deep-fried, brisket-stuffed avocado and looked up as the sunset painted the sky with the pinks and purples of a Concho pearl. It reminded me that beauty, adventure, and the best trips are often found in the most unexpected places. So whether you follow my footsteps or forge your own path, I hope to see you on the road.