Gettin’ Corny at the State Fair of Texas 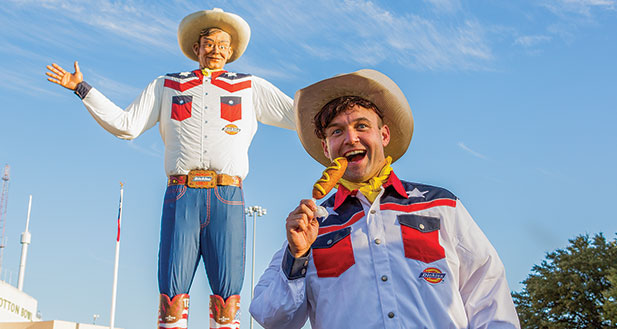 There’s no denying that Texans know how to throw a party. Whether it’s SXSW in Austin or The Great Texas Mosquito Festival in Clute, we do it right.

And if you take all that Texas pride, 100 years of history, a mascot as tall as a building, and toss it in a deep fryer, what comes out is the biggest party of all—the State Fair of Texas in Dallas.

10:00 a.m. I hit the gates as soon as they opened and became one of the millions of visitors who come to Fair Park each year for the State Fair. While the grounds themselves are a National Historic Landmark full of amazing Art Deco architecture, the grandest landmark of all is Big Tex, towering above the fair at a whopping 55 feet tall. I greeted the big guy and headed into the Hall of State, which houses a museum dedicated to Big Tex history, from his debut in 1952 to his Texas-size comeback after he burned in a 2012 fire.

10:30 a.m. Excitement swelled inside the park along with the familiar smell of deep-fried food. The yearly “Big Tex Choice Awards” have become the undeniable Superbowl of fried cooking, spawning abundant creative and downright sinful selections. To kick things off, I started at the classic Fletcher’s Corny Dogs, from the company credited with inventing the corn dog and introducing it here in 1942. I doused my piping-hot corn dog in mustard, and in no time was gnawing remnant fried morsels from the wooden stick.

11:30 a.m. I hopped on the Texas Skyway, a gondola hanging 65 feet in the air. The ride gave me the perfect bird’s-eye view to plan my next moves.

12:15 p.m. I wandered into the Livestock Exhibits and found myself standing nose-to-nose with prizewinning steers and blue-ribbon chickens. The fair may be in a fancy city; however, at heart it’s still a Texan affair, all the way down to the aromatic pens.

1:30 p.m. I found more than a few hobbies to master inside the Creative Arts Building, housing case after case of award-winning artwork ranging from patchwork sweaters to yarn-ball dolls. I was almost inspired to start working on my crochet skills, but was instantly distracted by the two-ton butter sculpture in the corner.

2:30 p.m. Salivating, I headed immediately for some deep-fried butter. Once I bit into the warm, doughy ball, drizzled with honey and stuffed with a small pat of melted butter, I became a butter-believer.

3:00 p.m. I roamed the park in a deep-fried oblivion, sampling its golden-brown treasures: fried pimento cheese, fried biscuits and gravy, fried pizza, and even fried beer. I finally satiated my deep-fried desires with a plate of fried Nutella.

6:00 p.m. I took a break at the Pan Am Arena for the nightly ostrich races. The human jockeys took their seats atop their noble birds and the feathers started flying. The race was literally neck and neck the entire time and my belly hurt from laughing.

7:00 p.m. I braved some rides at the Midway, starting with the Texas Star Ferris wheel, the tallest in Texas at 212 feet high. This worked up my confidence for a few more twirling rides, and my over-confidence to think I could win a giant stuffed bear on one of the many games.

7:15 p.m. It was time for one of my favorite State Fair traditions—the Starlight Parade. I grabbed a fresh-squeezed lemonade and joined the families lining the streets to watch the lighted floats and street performers pass by. It was a grand finale to a grand day.

The State Fair of Texas is a celebration of our deep-fried lovin’, livestock raisin’, sun-swelterin’ state, and the friendly and creative people who live in it. It’s so diverse, but one thing’s for sure: You’ll have a Texas-size time. So whether you follow my footsteps or forge your own path, I hope to see you
on the road.