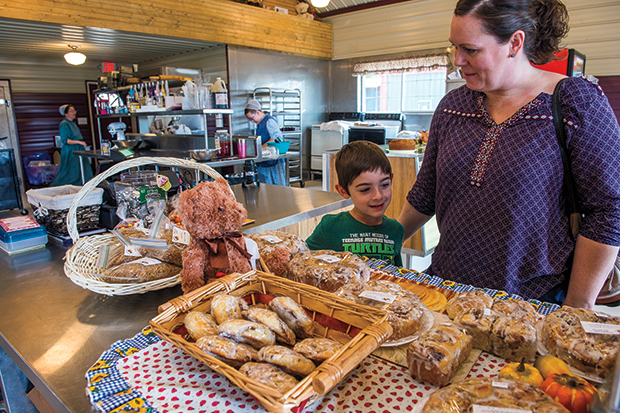 Located between the angling hotspots of Lake Tawakoni and Lake Fork, the northeast Texas town of Emory is like a favorite secret fishing hole for fishermen, who stop by to fuel up on comfort food and stroll the quiet courthouse square. The lakes and their abundant wildlife, including bass, catfish, and crappie, also draw a different and notably iconic type of angler—bald eagles.

Emory is at the intersection of US 69 and Texas 19, about 60 miles east of Dallas. For tourism information, call the Rains County Chamber of Commerce at 903/473-3913

The festival includes eagle-viewing bus and barge tours of Lake Fork, where birders look for eagles on the hunt—they can fly at speeds of 30 miles per hour and dive as quickly as 100 mph in pursuit of fish—and for their large nests in the trees surrounding the lake. Along with birding tours, Eagle Fest also showcases organizations that shelter and rehabilitate injured or orphaned hawks, owls, eagles, falcons, and vultures.

“The bird demonstrations offer a firsthand view of eagles and hawks in flight, which is amazing to see as they land on the ground right next to you, close enough to touch,” says Keeley Roan, Emory’s director of economic development.

Some eagles live here year-round, while others spend the winter here and head north during the summer. Similarly, Emory is a worthy getaway whether you’re visiting for Eagle Fest or at any time of year. As a resident of Canton, just 25 miles south, I like to visit with friends to enjoy the town’s heritage, comfort food, and fun boutiques.

The 1908 Rains County Courthouse anchors the downtown square and sets the stage for Emory’s historically rich atmosphere. Emory was named for Emory Rains, a delegate to the Texas Convention of 1845, which approved the state’s annexation to the United States. Rains also sponsored Texas’ first Homestead Act and helped carve Rains County out of Wood, Hunt, and Hopkins counties in 1870. The courthouse, which replaced one that burned down in 1879, is a Classical Revival-style building shaped like a Maltese cross with four projecting, two-story wings and a domed crown of reinforced tin slate. Its ginger color comes from the local clay, the source material for a brick factory in the early 1900s.

About a mile from the square, Emory Heritage Park (open by appointment) chronicles local history with an exhibition of early homes, businesses, and a church. The centerpiece is the 1912 George and Florence Luckett House,
a two-story farmhouse where the Lucketts raised 18 children. The home is furnished as if the massive family has just stepped out. Crystal stemware stands on the decorative buffet in the dining room, and a 1927 Home Comfort stove occupies the kitchen.

Also at Heritage Park, visitors can see the 1930 Shady Grove Missionary Baptist Church and the 1920 Point Service Station and Point Cotton Gin scales building. Other structures in the park include a bandstand, a steel jail cell, and a replica of the Rains County Leader’s 1887 office, including a printing press and pieces of moveable type.

Emory’s restaurants cater to classic Texas tastes. When the front door opens at Y’all Come Back Cafe, all heads swivel to see if the newest visitor is a friend from down the street. There’s no gourmet fare here, but if you want meatloaf, a chicken-fried steak, or a plate of biscuits and gravy, you’ll be just fine. Just ask the regulars who congregate at the “Table of Knowledge.”

“It’s where the old geezers gather to talk about the weather, cows, and hay,” owner Opal Baker says. “Y’all Come Back is a great place because we’re a big family. The waitresses know everybody, and they know their families.”

Another tasty stop is the Cinnamon Bear Bakery, which bakes treats like blueberry cream-cheese coffee cake, as well as kolaches and various breads. My favorites are the banana bread and the moist cinnamon rolls.

“The cinnamon rolls are made with a sweet yeast dough and are filled with butter, cinnamon, and sugar,” says owner Tammy Kulp. “They are rolled up and iced when they come out of the oven.”

In the winter, two welcome stops are Reka’s Rise and Shine Coffee Co., which keeps the town caffeinated, and a Sweet Affair, a café serving delectable soups and sandwiches.

If I have time to linger past lunch, I take a moment or two to browse through shops like Thrifty Chicks. The store features repurposed and redesigned furnishings and decorative items, as well as clothing. If I don’t walk out with something new for my house, at least I leave with a new design idea or two.

It doesn’t take much of an excuse for me to claim an hour or two off to share lunch with a friend in Emory. Just like the fishermen and the bald eagles, I’ll keep coming back.