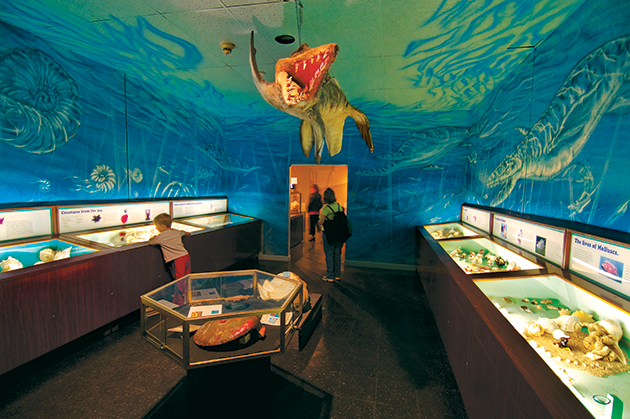 After exploring the outside attractions at the Heard, spend some time with the indoor exhibits, which include fossils and rocks.

My kids and I are near the end of the 1½-mile Wood Duck Trail at the Heard Natural Science Museum & Wildlife Sanctuary in McKinney. The route meanders in and out of the woods; skirts wetlands where ducks, geese, and egrets commune; and wends past stretches of prairie with gracefully waving grasses. My daughter Susanna stops suddenly to watch a giant swallowtail butterfly flutter down, back up, and out of sight. I smile when a gasp of awe escapes the mouth that had, moments before, complained of being hot, tired, and in need of something—anything—from the gift shop. Meanwhile, Samuel is ahead of us as usual, just around the path’s next curve, the back of his head barely visible through the tall grasses. He’s been reading the warning signs posted along the trails excitedly, reminding us to “Watch out for copperheads!”—and in the process, likely scaring away this or other examples of native wildlife.

The Heard’s 289 acres include six such trails, which work their way through a diverse landscape comprised of wetlands, bottomland forest, upland forest, blackland prairie, and white-rock escarpment habitats. The Heard is also home to a friendly, homespun natural science museum that houses turtles, snakes, and other small animals, as well as fossils, geodes, and examples of taxidermy. While the museum provides a cool respite and plenty to inspire curiosity and learning, it’s somewhat secondary to what’s outside.

Outdoors, in addition to the natural beauty of the preserve itself, there’s also an Animals of the World exhibit, where large enclosures house “ambassador animals” (rescued animals that aren’t fit to be re-released into the wild), such as a ring-tailed lemur and a white-nosed coatimundi. The coatimundi, an endangered cousin to the raccoon, gamely lifts its nose toward us in what seems like a nodded greeting. Nearby, the Native Texas Butterfly House & Garden attracts many of the two dozen butterfly types that call North Texas home. The Pioneer Village, a collection of eight playhouse-size buildings typical of late-1800s prairie settlements, is a new draw, inviting children to explore the trappings of early life on the Texas prairie. 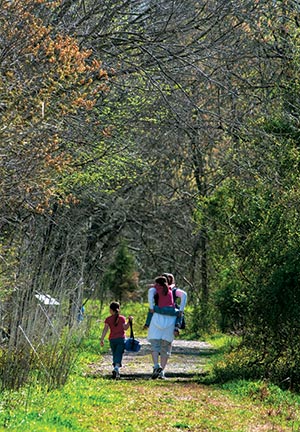 It’s all the legacy of the late Bessie Heard, a McKinney citizen who took nearby urban sprawl as a cautionary tale and set her mind on preserving a swath of land where children and adults could come to experience nature. An avid collector of Audubon lithographs, butterflies, minerals, and other materials relating to the natural world, “Miss Bessie,” as she was known, founded the museum and nature center at age 80, opening it in 1967; she lived another 21 years to watch it flourish. Today, it’s a community hub brimming with activity. A ropes course and zipline (available by reservation) draw groups of adults and teens for team-building, and local Eagle Scouts have left their mark by building long stretches of boardwalks in the marshier portions of the trails. All told, some 90,000 people come through each year.

Following our long hike and a picnic lunch, we are ready to return to the cool quiet of the museum. The Native Texas Snakes exhibit gives us our first close-up with that copperhead we’ve been looking for all morning. The signs had piqued our curiosity, but it’s a relief to come face-to-face with the snake in a controlled environment, where we can admire its markings and angular head without risk. We wander our way through other exhibits and end up at the new mosasaur display, the fossilized remains of a menacing sea reptile that was excavated in nearby Garland by volunteers from the Dallas Paleontological Society. This particular creature is estimated to have been about 40 feet long and weighed around eight tons.

Samuel and Susanna spot a familiar-looking fossil nearby—a ribbed nautilus shape that’s nearly identical to something they recently dug up in our Fort Worth backyard. We learn that it’s an ammonite, a marine creature that was a favorite snack of the mosasaur; both predator and prey became extinct in the Cretaceous period. An informational card reads, “Ammonite fossils are quite common in Texas. If you find one, you are holding the remains of an animal that lived during the time of the dinosaurs!” I catch my breath, feeling shortsighted for having shooed my children outside when they’d brought their muddy ammonite into the house. Next time, I promise myself, I will be more enthusiastic about the spoils of their digging.

Back in the car, I sit for a moment to review the short route to downtown McKinney, where I’ll treat them to a cup of gelato at Paciugo Gelato. They’re chatting in the backseat about the mosasaur when Sam grabs for his camera, suddenly silent. In the beautifully landscaped row of plants that divides the parking lot, a hummingbird is flitting among the asters and milkweed. During our few short hours at the Heard, nature has, in turn, rendered each of us speechless.