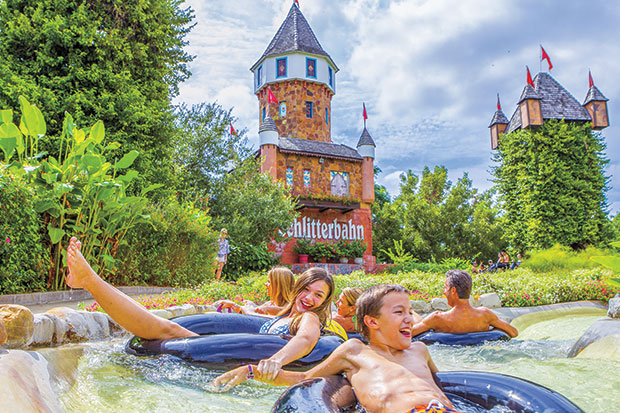 When I first visited Schlitterbahn in New Braunfels as a teenager in the mid-1980s, the waterpark was just a few years old. I vividly recall spending a blistering summer day racing between the various slides, nearly losing my bikini top on a tube chute, and intentionally bumping my inner tube into cute boys while navigating the rapids and eddies of an artificial river. I came away with a wicked sunburn and memories to last a lifetime.

Schlitterbahn operates four waterparks in Texas. The outdoor parks open from mid-spring through most of September, and the South Padre and Galveston indoor sections stay open for the rest of the year on weekends. Ticket prices vary at the different parks, ranging from $51 (adults) and $39 (children/seniors) for New Braunfels day passes to $40 and $28, respectively, at Corpus Christi. Check the parks’ websites for specifics on tickets, discount promotions, and hours.

That was about 30 years ago, and in the intervening years I’ve grown up and now have a teenage daughter of my own. For me, Schlitterbahn had been a memorable rite of passage, and I wanted her to have the same experience. So I bought her an airtight one-piece swimsuit, slathered her with a thick coating of sunscreen, and headed out to New Braunfels, just north of San Antonio on the eastern edge of the Hill Country.

Upon pulling into the ample (still free!) parking lot, I noticed right away that Schlitterbahn has grown significantly in the past few decades. Although its iconic German tower is still visible over the tree line, the tangle of slides and chutes is much denser than I remembered, and the park now sprawls over 70 acres, encompassing about 40 attractions.

Schlitterbahn’s growth is the result of the ever-expanding vision of the Henry family, the founders of the still-family-owned waterpark that traces its roots on the spring-fed Comal River back 50 years. In 1966, Bob and Billye Henry purchased Camp Landa, a 40-acre property on the Comal with about 30 cabins shaded by live oaks and cypress trees. It was a family effort, and the Henrys’ three children—Gary, Jeff, and Jana—soon became involved in the daily operations and contributed ideas of their own. 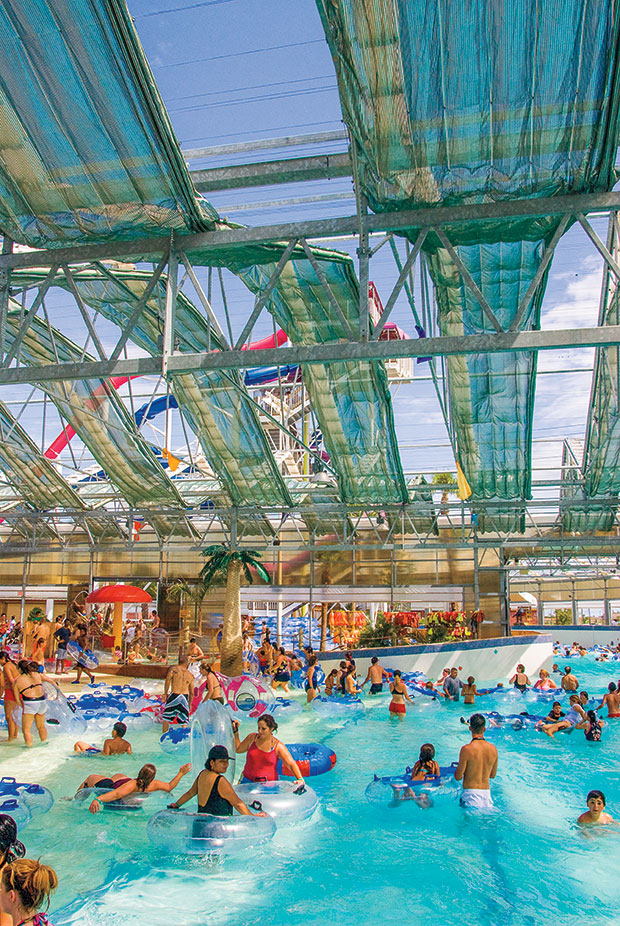 “That’s how we grew up as the Henry family, doing stuff together,” Gary recalls. “It just seemed natural to continue that.” Today, Gary serves as the company’s CEO; Jeff, dubbed “the wizard of water,” oversees the development of new attractions and parks; and Jana (now Faber) is in charge of merchandising. However, Gary insists, “We really don’t dwell on titles here. Everyone just does what’s necessary.”

At first, in 1968, Bob Henry added some simple wood-and-fiberglass tube chutes that splashed into the Comal River. A decade later, the family began planning a waterpark for the resort, with a German theme in honor of the region’s cultural heritage. In August of 1979, Schlitterbahn (loosely translated as “slippery road”) opened to the public with four waterslides attached to the 60-foot-tall tower patterned after the guard tower of Solms Castle in Braunfels, Germany.

With each passing year, Schlitterbahn grew bigger, better, wetter, and wilder. In the 1980s, the park expanded to include a 50,000-square-foot swimming pool and the first inner-tube rides—the Hillside, Cliffhanger, Tunnel, and Raging River Tube Chutes. The park also added new slides, offering visitors the chance to slip down the loopy Soda Straw Body Slide, ride tubes through the four-story-
tall Banzai Pipeline, race each other down the Der Bahn Speed Slides, or float along in the current of the Congo River Tube Float.

Families seeking a slower pace could unwind at the Polywog Pond or the Lagoon Pool, and depleted grown-ups could find refuge in the Lava Lagoon Heated Pool (formerly called the Sandbar Hot Tub) while sipping an icy beer or frozen strawberry daiquiri. “From the beginning we wanted to duplicate what we experienced on the Comal River,” Gary says. “You float along with your friends and spend time together, talking and having fun.” 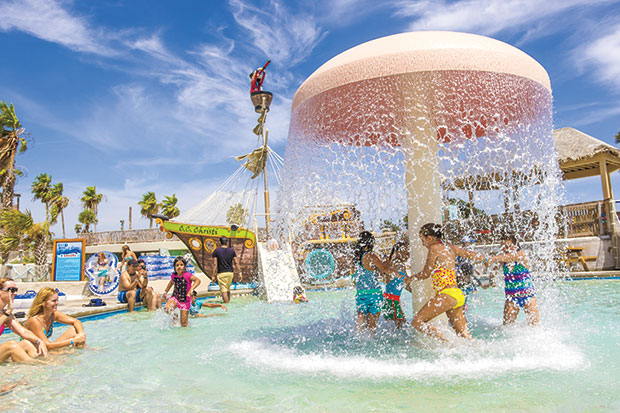 The next decade brought even more expansion and innovations, thanks in large part to the creative mind of Jeff Henry. In 1991, Jeff partnered with inventor Tom Lochtenfeld to create the first-ever inland surf experience, the Boogie Bahn, in which riders use boogie boards to skim across a shallow rush of water that shoots uphill at 50,000 gallons per minute. This technological breakthrough led to the development of the first uphill water coaster, the Dragon Blaster (later renamed Dragon’s Revenge), which opened in 1994 and employs powerful jets of water to propel riders on inner tubes uphill as well as down. Jeff improved upon this model two years later with the even larger Master Blaster water coaster, which starts from a height of 65 feet and descends in two heart-lurching three-story drops in a matter of seconds. That same year, he launched yet another novel attraction, the Torrent River, with waves generated at regular intervals to propel tubers along a circular course.

In the new millennium, the Schlitterbahn kingdom has expanded well beyond the Hill Country. The company opened a beachside waterpark at South Padre Island in 2001, featuring a Transportainment River, a system designed to carry visitors on their tubes to the various attractions on a moving waterway, thereby converting hot, standing lines into cool, floating queues. Schlitterbahn Galveston followed in 2006—it was the first to boast a convertible roof over part of the park to encourage year-round visitation. A Kansas City location opened in 2010, and the newest park, in Corpus Christi, opened last summer—with a golf course to boot.

Along the way, the Henry family has continued to push the boundaries of the possible with rides that defy expectations and challenge the rules of physics. In 2014, Schlitterbahn earned an entry in the Guinness Book of World Records for a new waterslide in Kansas City called Verrückt, the world’s tallest at 168 feet and 7 inches (the equivalent of a 17-story building). The Galveston site, in honor of its 10th anniversary this June, will unveil MASSIV, the world’s highest water coaster—starting at a towering 81 feet—and also the longest of all Schlitterbahn attractions in Galveston, spanning about three football fields in length.

Though these daredevil rides may attract thrill-seekers, Gary Henry emphasizes that Schlitterbahn’s parks are primarily designed for families. Ninety-eight percent of the parks’ water features don’t exceed three feet in depth, and all offer multiple play areas designed specifically for children, plus the gratis use of lifejackets and inner tubes.

There are plenty of other family-friendly amenities as well. Thatched-roof cabanas are available for rent, and the parks also have free picnic tables. Outside food is welcome, despite the presence of onsite eateries and concession stands plying barbecue, burgers, pizza, fries, funnel cake, and other tempting fare. In addition, the overnight accommodations at the New Braunfels, South Padre Island, and Corpus Christi sites encourage families to spend vacations together just like in the old days, without the distractions of technology. 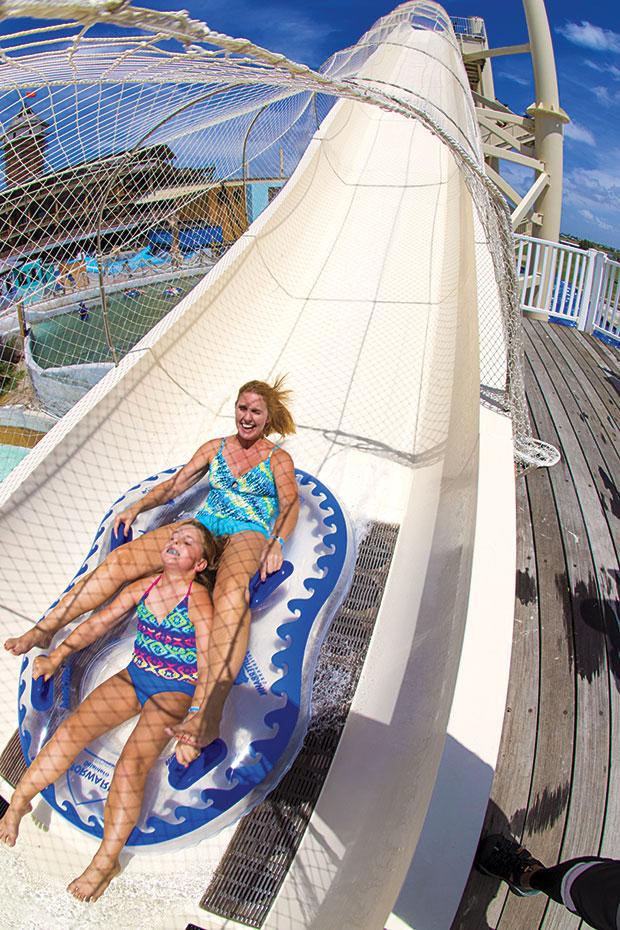 Of all the attractions, the river systems are Gary’s personal favorites, precisely because of the cross-generational bonding opportunity that they provide: “I can spend hours floating along in a tube, laughing and playing with my grandkids.”

The river systems turned out to be my daughter’s favorites as well. She thoroughly enjoyed trying to tip me out of my inner tube repeatedly, and even flirted with a few boys along the way. As for me, I relived more than a few memories and braved some brand-new experiences—such as face-planting dramatically on the Boogie Bahn in front of a crowd of curious onlookers, much to my daughter’s amusement. Together, we sped down through the dark, enclosed tunnel of the Black Knight slide in an inner tube built for two, rode a circular inflatable raft down the winding curves of the Wolfpack Raft Slide, and then followed that with a ride on the Master Blaster, squealing all the way. With our cellphones carefully stowed in one of the myriad lockers, we spent a full day in each other’s company without the constant interruption of the outside world. We hauled tubes up flights of stairs to line up for rides together; we raced to see who was faster on the speed slides; and we indulged in ice cream while lounging poolside at Blastenhoff Beach.

By the end of the day, we were both spent. Before heading home, my daughter insisted on floating along the Torrent River one last time. As we bobbed along in the waves, drifting under a flawless blue sky, it occurred to me that one day she might bring her own daughter here to experience Schlitterbahn—though by then, no doubt, the waterpark will have even more numerous and more exciting attractions to offer. Finally, as it neared closing time, we dragged ourselves—tanned, tired, and happy—out of the river circuit. We had come full circle.