Into the Big Thicket

Experience the verdant charisma of this southeast Texas preserve 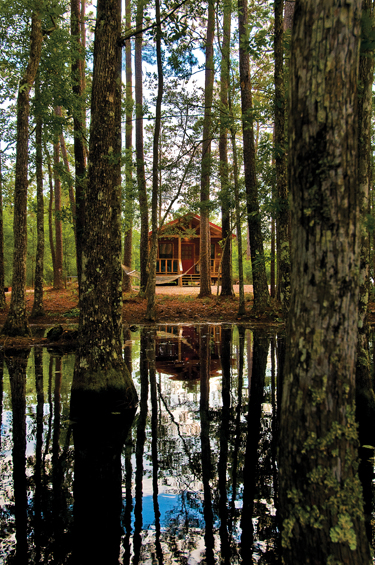 The cozy and quiet Cabins in the Thicket, near Kountze on McNeely Lake, await visitors, just five minutes from the Big Thicket Visitors Center. (Photo by Stan A. Williams)

Deep within the piney forests of East Texas, I watch fireflies dance like tiny warriors with flaming spears. Each little flash doesn’t signal aggression, though; these sparkling bugs use their luminescence to look for love. Earlier in the week, at the Big Thicket Visitor Center, I had learned that each species of firefly has its own unique pattern, and that the males flash in flight, while the females stay put and blink only when a compatible mate turns on his taillight. It’s a mystery I never contemplated prior to this trip. As the light show continues, mirrored by the glimmer of the occasional star through the murky night sky, I am reminded once again that nature’s wonders come in all sizes—great, small, and somewhere in between.

That’s a good lesson for any visitor to the Big Thicket National Preserve to keep in mind. Comprising 15 units and covering more than 100,000 acres and spanning 90 miles of the Neches River, the preserve just added 6,000 acres in April, and with luck it will continue to acquire more. But, already there is no shortage of land and water to explore, with tracts offering the chance to study overlapping ecosystems, including ancient forests, Southern upland plains, and coastal drainage areas. If West Texas’ Big Bend is about frontiers, mountaintops, and open space, the Big Thicket is about tuning into the charisma of the micro-cosmos, unveiling the quietude of the dark woods, and appreciating the fecundity of the bayous of East Texas along the Neches. Defined by the presence of swamps, birds, and bugs, it is a place that might inspire followers of Henry Thoreau as opposed to Frederic Remington.

I arrived midweek on a route from Houston through Beaumont, and as I made my way to the town of Kountze and the nearby national preserve’s visitor center, I happily put the concrete canyons and urban hustle behind me. Nothing I had seen in my Lone Star travels prepared me for the humid hug of East Texas. I found cozy comfort in the forest, where dark woods promised romance and anonymity. I had heard rumors that the Lone Star Sasquatch might be found lurking in the Big Thicket, and that a handful of hopeful birders believed that if the long-lost ivory-billed woodpecker still persists, it might one day return to the mature mixed forests of the region.

I was eager to see for myself.

At the visitor center, I found Ranger Leslie Dubey, who oversees educational efforts at the Thicket, and her colleagues cheerfully snacking on ripe dewberries harvested from the wildflower meadows nearby. A handful of tart, pink, raspberry-like fruits washed the last traces of highway grit from my taste buds—a small, yet welcome, surprise. On the nearby trails we found small sandcastles left behind by migrating crayfish, while overhead, cardinals,
flocks of sparrows, and warblers on the wing filled the air with their songs. The incredible biodiversity of the preserve has helped it attain a reputation as a national destination among birders and other wildlife lovers. Popularly known as the “Ark of the Continent,” the Big Thicket boasts more than 100 species of trees and bushes, more than 1,000 species of flowering plants, 50 distinct types of reptiles and amphibians (including a healthy population of alligators), and 300 bird species.

Abundant spring rains had closed most of the classic Big Thicket paddling options during my visit. Downed wood from Hurricane Ike last year had likewise made a mess of the cypress-tupelo sloughs around Franklin Lake, where Dubey frequently takes visitors. After orienting me to the area and the visitor center exhibits—not only the creature features, but also the mix of land and water under control of the preserve—she and I loaded up a pair of kayaks
and headed for little-known Johns Lake. As we paddled, Dubey told me about a Houston Chronicle reporter who had just days earlier become confounded
by the twists and turns of the bottomland swamps. The journalist survived to file her story; now the ranger was ready to test my sense of direction as well.

“It’s not so easy to know where you are,” Dubey said, as we paddled out to the edge of the.Neches River, where the current surged. She carried a GPS unit and satellite phone in case of emergency, and spoke enthusiastically about the capacity for the forest to regenerate in the face of fire and destructive storms. Rather than try to negotiate the flowing river, we doubled back to calm water. Dubey affirmed that alligators were nothing to worry about, but I was left feeling a little exposed in my small boat. Still, as we coursed between the cypress knees, those distinct joints that help the trees anchor to the  submarine marl, brushed by cobwebs and Spanish moss, I found a relaxing rhythm. Soon we spotted some of the markers from the area’s original paddling trails, some of the earliest in Texas, and as we followed these, the Big Thicket revealed itself even more.

That first night, I found refuge at the cozy, comfortable Cabins in the Thicket, new accommodations on the shores of McNeely Lake, just minutes from the
visitor center and the preserve’s famed Kirby Nature Trail. Before heading indoors for the evening, I stopped to briefly explore the trail, which offers about four miles of hiking in total, and discovered a jungle-like wonderland of ancient trees-many tipped by Hurricane Rita in 2007 and other recent storms. The black water swirling through the cypress sloughs made an inky flow beneath the wooden boardwalks. Skinks slinked through the litter, while ferns swayed in the mild spring breeze. The well-appointed cabins, with all the amenities of home, had been relocated from a ranch outside of Dallas, and offered a fine bug-free oasis for reading and sleeping to the sound of a bullfrog serenade.

Gray skies the following day did not dissuade me from my planned backpacking trip into the Big Sandy Creek Unit, an area of the Big Thicket that extends to northwest of the small town of Dallardsville. Thanks to its multiple segments, the preserve has a collective boundary bigger than that of Yellowstone National Park. With so much water in the creeks, any more boating would have to wait for another visit, so I shouldered my pack and started my hike.

I followed the upper Woodlands Trail, which begins in an old forestry plantation and then rises above the floodplain to a mature hardwood forest dominated by loblolly pine, southern magnolia, and American beech. Stepping carefully to avoid poison ivy, I soon discovered each unit in this curious checkerboard of public lands exhibits a distinctive character, like siblings or close cousins.

By the time the fireflies began to emerge, I was bushed from walking. I setup my tent, and then realized that my headlamp and flashlight were back in the car. With lightning bugs making their amorous intention known, I swatted a few mosquitoes and set about boiling a pot of noodles. An owl hooted. Spring peepers, small, seldom-seen frogs, added to the nighttime chorus. Somewhere in the distance, the timer went off on a petroleum pump, and the machinery came noisily to life. Ranger Dubey had explained to me that the preserve had been broken up to accommodate traditional use, such as logging and oil and gas extraction. So I took it in stride that the Big Thicket sometimes fails to shelter its visitors from the sounds of civilization.

Before it had a name or any sort of designation that might attract visitors, the Big Thicket spread across four million acres and held untold biodiversity.  Even today, Dubey explained, the preserve protects mere remnants of the longleaf pine and hardwood forests that stood so proudly across the Southeast until the first part of the 20th Century. As we enter a new era, conservationists argue the race is on to save what is left. I’m not convinced Bigfoot will ever turn up in East Texas, but what the Big Thicket offers is every bit as miraculous.

From the October 2009 issue